Stuck padlock without key - its attachements to the door seem stuck, how could I remove it?

I recently lost the key to the padlock for the door in the garage. This was installed by the previous owner. Don't have a duplicate of the key and could not find the original I've lost. 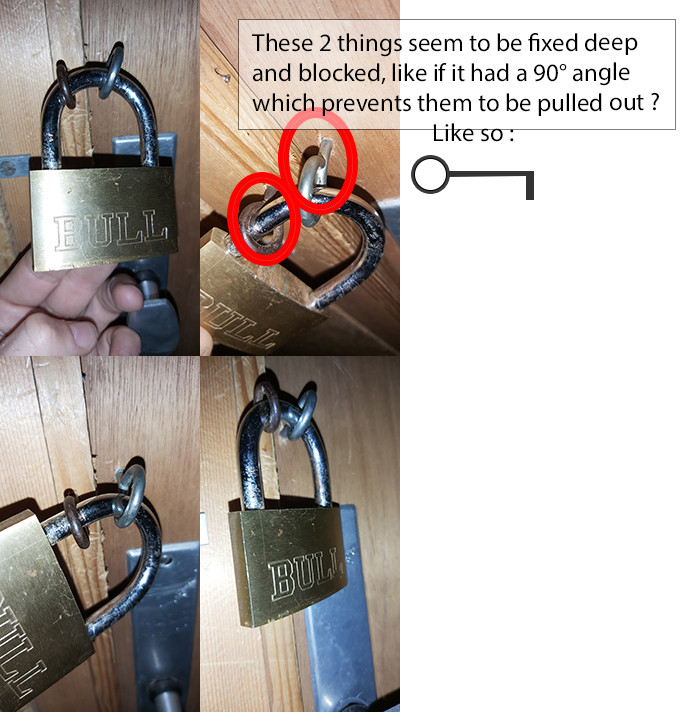 I tried to use wrenches to damage/break the padlock, but I have very small space to operate, after 10 / 15 minutes of trying, I gave up, could not find a proper position for both wrench to get enough force ( like you can see , there is not so much space between the door and the things in the circle in red ).

I tried removing these things attached ( circle in red on the photo ) which keep the padlock, the door, and the wall fixed together. But for some reason they would not totally come out my way ? Like if they were not entirely straight, with some angle that makes them stuck or something. Not sure if I have tried hard enough on both at the same time. But it looked really stuck at some point.

I thought of borrowing or renting a grinder, but I would like to avoid that - would be a last solution.

What could be done ? Could you tell just by looking at the photo ?

Any help / advice would be much appreciated. Thanks.

A set of bolt-cutters of an appropriate size should be able to cut that shackle without too much trouble. It appears to be a relatively cheap lock.

Alternatively you could also easily cut either or both of the eyes that the lock is holding. Those are just bent mild steel.

You could pry open the loop of the screw-eye using vise-grips. The screw-eye above the door handle looks the easiest and most accessible. Just make a strong grip near the cut end, then twist the vise-grip to roll open the loop. With the door open you can dismantle everything. If the garage needs continued security, have your new locking mechanisms ready to install before you release the old lock.

There is a good chance you can shim this padlock open. This required minimal skill. You will need some tin snips (or regular scissors will probably work) and an empty aluminum beverage can. 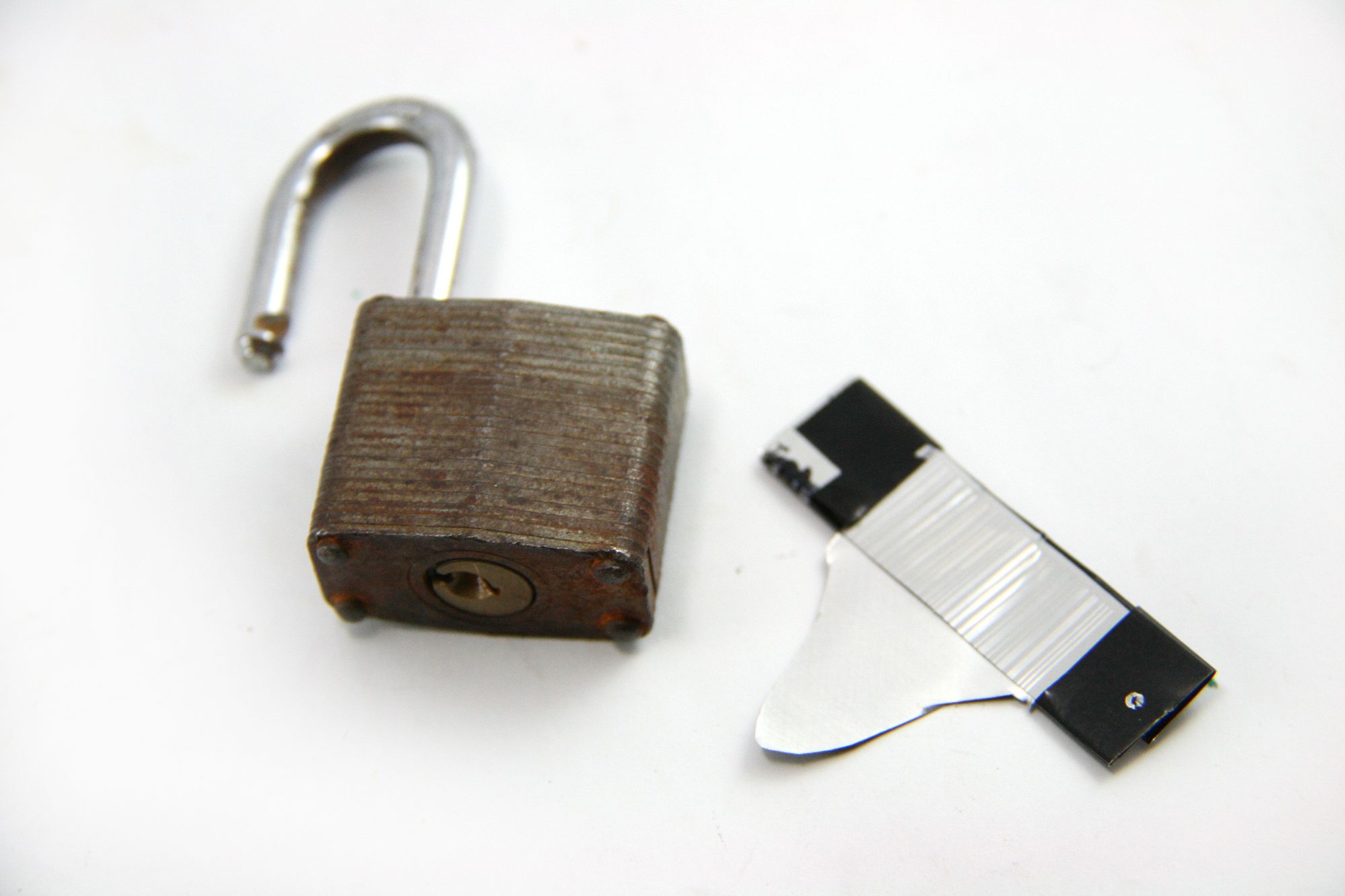 You cut a shape like this and bend it so the wings can wrap around the shackle, and the extended portion can slip into the hole the shackle goes into in the lock body. Then rotate the setup and it may release the locking mechanism.

A video demonstration will probably be easier to follow.

The loops are the heads of screw eyes - you need to remove the lock to unscrew them unless you want to do a LOT of damage to the door.

So, cut the lock. If you don't want to get a grinder, start cutting with something else, because it will be slow going. Bolt cutters will cost more...

Perhaps a quart of liquid nitrogen? I seem to recall that being popular with bike thieves for a while - freeze the lock, smack with a hammer, sweep up the remains.

Not the answer you're looking for? Browse other questions tagged doors lock stuck blocking or ask your own question.

2
How to remove a stuck key?
3
Where can I get a new key for an old lock?
1
How can I make a copy of a door key without a matching blank?
2
Old lock to pick
1
Adding a mechanical part to a lock insert
1
Indoor sliding doors getting harder to open/close
0
Key stuck in Security Door
0
Solid door on top of hollow apartment door to reduce outside noise?
2
How can I remove this stuck screw in my bathroom?