12/3 cable coming from box, is this correct?

I have the following junction box: 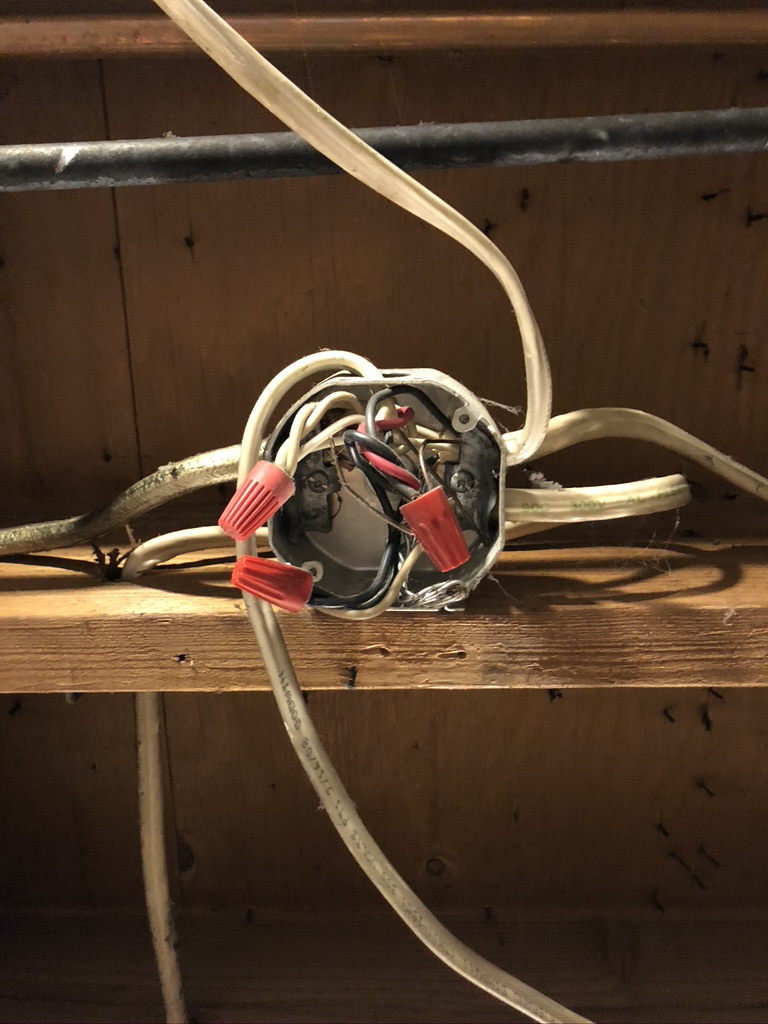 So there's essentially one X/3 coming in, and four X/2 going out. The aluminum to copper needs to be property pigtailed with a purple wire nut (which is accepted here). Let's ignore that issue for now; I'm trying to understand if my assumptions about this setup are correct and why it might have been set up this way.

Here is a drawing I made of the wiring (I omitted the other lights, as they are just pigtailed together): 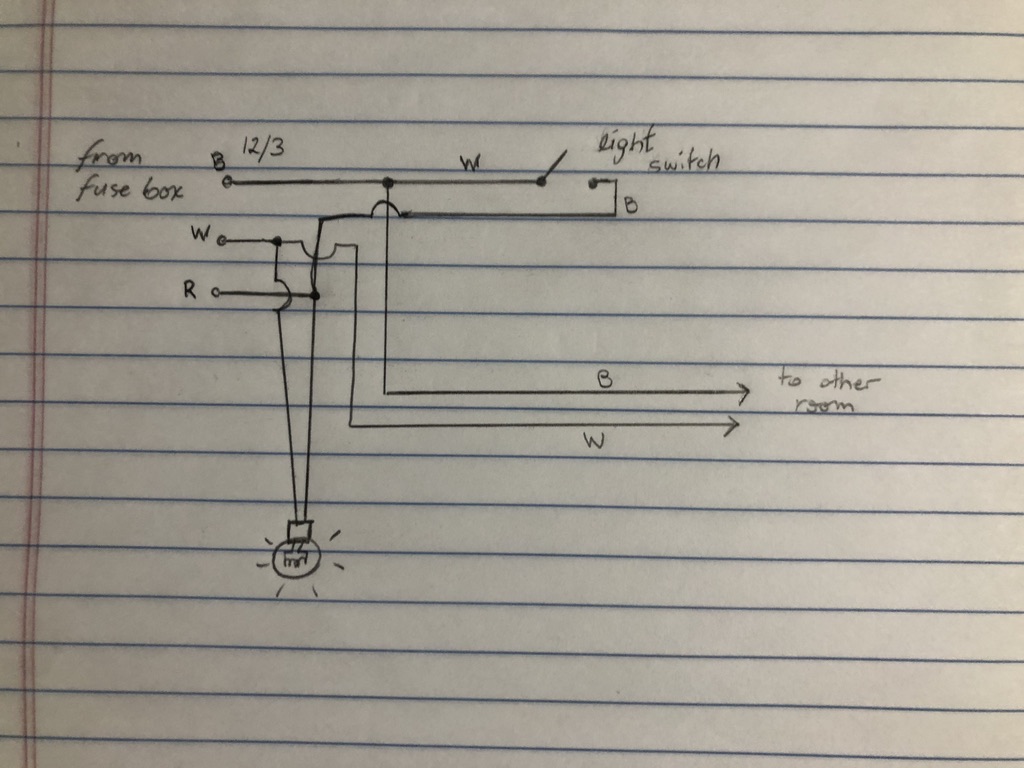 When I open the switch, the lights turn off, as expected, and voltage drops to 0 on the red wire (R) coming from the fuse box. The black wire going to the other room remains live.

When I close the switch, the lights turn back on, and there is now 120 volts on the red wire (R) going to the fuse box. The wires going to the other room remain live, of course.

Now, I'm assuming that the 12/3 cable is the one delivering power to this circuit, and is coming from the fuse box. The white wire is shared common for the lights and the other room. Which makes it seem like the red wire is useless. Does this seem correct?

To me, it seems the 14/2 wires were retrofitted into this box to add additional lights, and originally this junction box was the one that had a light attached to it. Which makes me think that the red wire from the fuse box should be used as the neutral/return for the lights; so the lights and the other room both share power from the same black from the 12/3, but return power on the other two wires, separate from each other.

UPDATE: After reading the comments and answer and looking around a bit more, it seems the 12/3 cable probably terminates in this junction box (and the red cable isn't attached to a load): 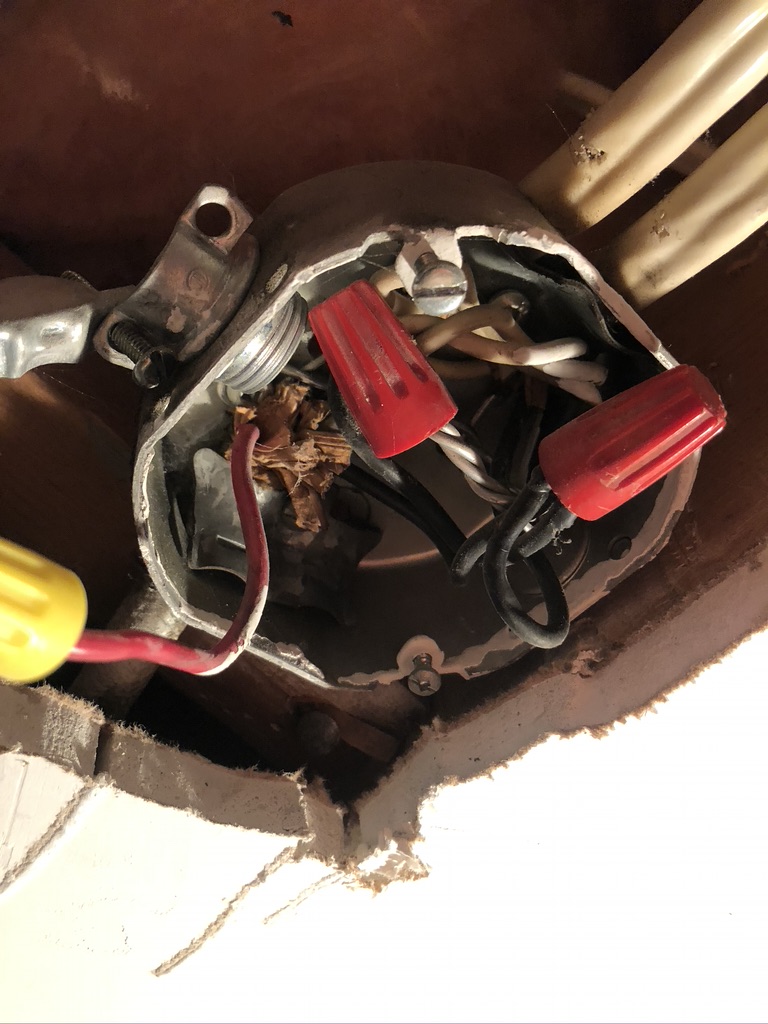 Red is carrying switched-hot off to another location where a light might have been fed from. It's not going straight back to the panel. If you follow it you'll probably come to a good place to fork off more light fixtures.

Red is the preferred color for switched-hot.

Now there are a few issues with this box. It's extremely over-full. You have 11 wires in there + ground + cable clamps, so I see 13 wire counts... at #12 that's 29.25 cubic inches required for that box. Those octagon boxes are about half that, so you'll need to get an octagon "extension box" to put on top of this box. Or you could change the box to a 4-11/16" square box (42 cubic inches).

As far as the aluminum to copper splices, purple wire-nuts may be Code but they sure like to start fires. You'd be wise to consider Alumiconns for up to 3 wire connections, and MAC Block connectors for 4+ wires. The MAC Block has 2 voids and allows up to 4 wires per void (though the 4 must be the same metal).

Not the answer you're looking for? Browse other questions tagged electrical wiring junction-box rewire or ask your own question.

1
Correct way to rewire for a ceiling fan + light from a switched outlet
0
Confused by wires coming from ceiling outlet box
0
Why is this switch box wired like a 3-way when there's no other switch?
1
Can I add a second junction box to house a doorbell transformer?
1
Ceiling fan with light - electrical box has two cables, one with a red wire
0
Two switch box with 12/2 and 12/3 circuits with cojoined hot wires, is this safe?
1
Connect Single 3-way Light in 3-gang Box (Lutron Caseta)
1
Wiring a receptacle from a ceiling box in a basement
1
How should I connect a light fixture to this box with four cables?