So I'm doing some DWV plumbing, and I'm close to being finished with my project. I'm looking for advice on the best way to clean up and chamfer PVC sch. 40 pipe (I'm mostly using 1-1/2" and 2" diameter).

My question mostly is which type of metal file to use?

Also, what angle of chamfer should I strive for? Should I file towards the length of the pipe or towards the end/opening? Should I consider the file enough, or also use sandpaper, and if so, what grit?

I would have bought a Reed DEB4, but those are pricey and since I'm almost done I'm going to stick to my file/sandpaper method.

I've been Googling this question for a while. I'm very surprised that there is little info out there as of now. I saw one mention that a "Flat Super Shear File" and a shear tooth file are the best options, but no real explanations; plus I don't find either of those tools on Amazon labeled as such.

The a deburring tool made for plastic pipe is money well spent if you'll use it enough. But the same tools that make sense for a professional don't necessarily make sense for a DIYer. If you're doing it yourself to save money, you can very quickly lose the savings buying tools you'll probably use once or twice. I think a plastic pipe deburring tool that will handle your 2" pipe is going to be a few bucks.

You can deburr the pipe adequately with a utility knife. It's not fast and you have to be careful not to cut yourself or gouge up the pipe, but it can be done. I think everyone does it when that's what's on hand, it's not worth a trip to the truck or the shop for the special tool.

There are some inexpensive options that are worth having and won't break the bank. A simple deburring tool is never a bad addition to your tools and under $10USD: 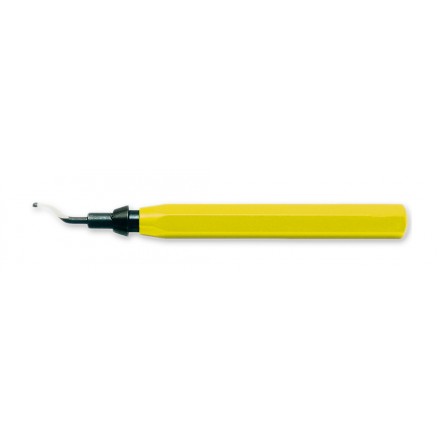 This type of deburring tool works on both the inside and the outside, it's not real fast but faster than a knife. It doesn't take up much space, you can put it in a shirt pocket. It will also work on metal pipe and many other situations where you want to round off the sharp edge where you cut metal.

You can certainly get it done with a file. Most any file will work, but a rounded one will work much better on the inside of the pipe. If you're buying one for the task, it's nice to buy something versatile so you're more likely to get other use out of it in the future. The most versatile file has to be the four-in-hand type, which has a flat file, rounded file, flat rasp, and rounded rasp in one tool. Of course for reaming the inside of the pipe you'll use the rounded file, the outside, the flat file. These are also available under $10USD. 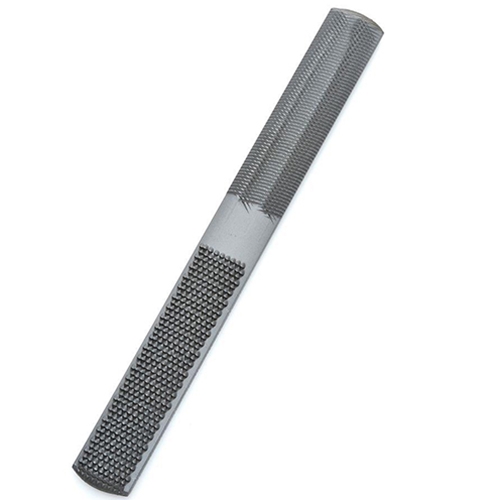 As for angles of chamfer etc., don't sweat it. You're not machining the barrel of field artillery, it's a plastic pipe. About 45 degrees, take off just enough to remove the plastic shavings and make it easy to assemble the joint. If you want to be precise about anything, better to focus on nice square cuts.

For the light amount of pipe I've cut around the house, I simply drag my utility knife "backwards" along the inside and outside of the cut.

I've always found this to be sufficient to break off the burrs while preventing any cuts into the edge of the pipe.

Use the Ridgid plastic pipe deburring tool, it's made for inside and outside, I have had one for years and it has saved me a ton of time and effort: 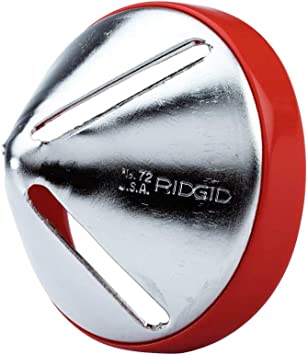 Couple of spins with a Twist-a-Burr® (or some other deburring tool) and done. I own one, I paid full price, I don't work for the company and I've been happy with it for years.

There's no need to (and plenty of reasons not to) taper the pipe, you just need to clean up the burr from cutting - on the inside so it does not impede flow, on the outside so it enters the fitting cleanly.

8 or 10 inch single-cut if using a file, you'd need a half round to be able to do inside as well as outside, but that's going to be S. L. O. W. .vs. using a deburring reamer. File direction is "none of the above" - file around (tangential to) the pipe, with the file angled to just cut the corner off.

0
Best tool and blade to cut 8" pvc
1
What is the best way to cut this PVC line in a hot tub?
1
Leaky pvc ball valve handle cap and pvc joint
8
Can PVC be encased horizontally in concrete
1
Is it inadvisable to reuse PVC? (Sch-40 white stuff)
1
Fernco coupling to join ABS drain pipes under basement?
0
Well Pump Setup: Best Materials to Use for Pipes
1
Is there a revolving small flat file for a drill?
0
Using 1.25" SCH 40 PVC pipe to protect hose for irrigation
1
best way to connect poly pipe and PVC?