I was installing some new dimmers and outlets when I found two breakers were running in to an electrical box using a 3-wire conductor (red, black, white). Red/black were switched by different breakers, so they seemed to be sharing a neutral.

I've seen other threads (main one linked below) here that seem to indicate that this is OK as long as:

I wasn't sure how to tell if the two breakers are on separate "legs". How do I tell if this is the case? I found two boxes with this configuration. the breakers associated with o[![ne box were adjacent to each other. While the breakers on the other box are separated by 1 breaker. Does this seem right?

The other issue that the breaker pairs can be turned on/off independently. This doesn't seem safe and I was pretty confused with my NCV detecting voltage with only 1 breaker off. Is this anything to worry about? I imagine the rest of the circuits in my house follow a similar pattern - 3 conductors sharing 2 breakers.

The house was built in 1981 (WA state fwiw) and I don't know the history behind the electrical work here. 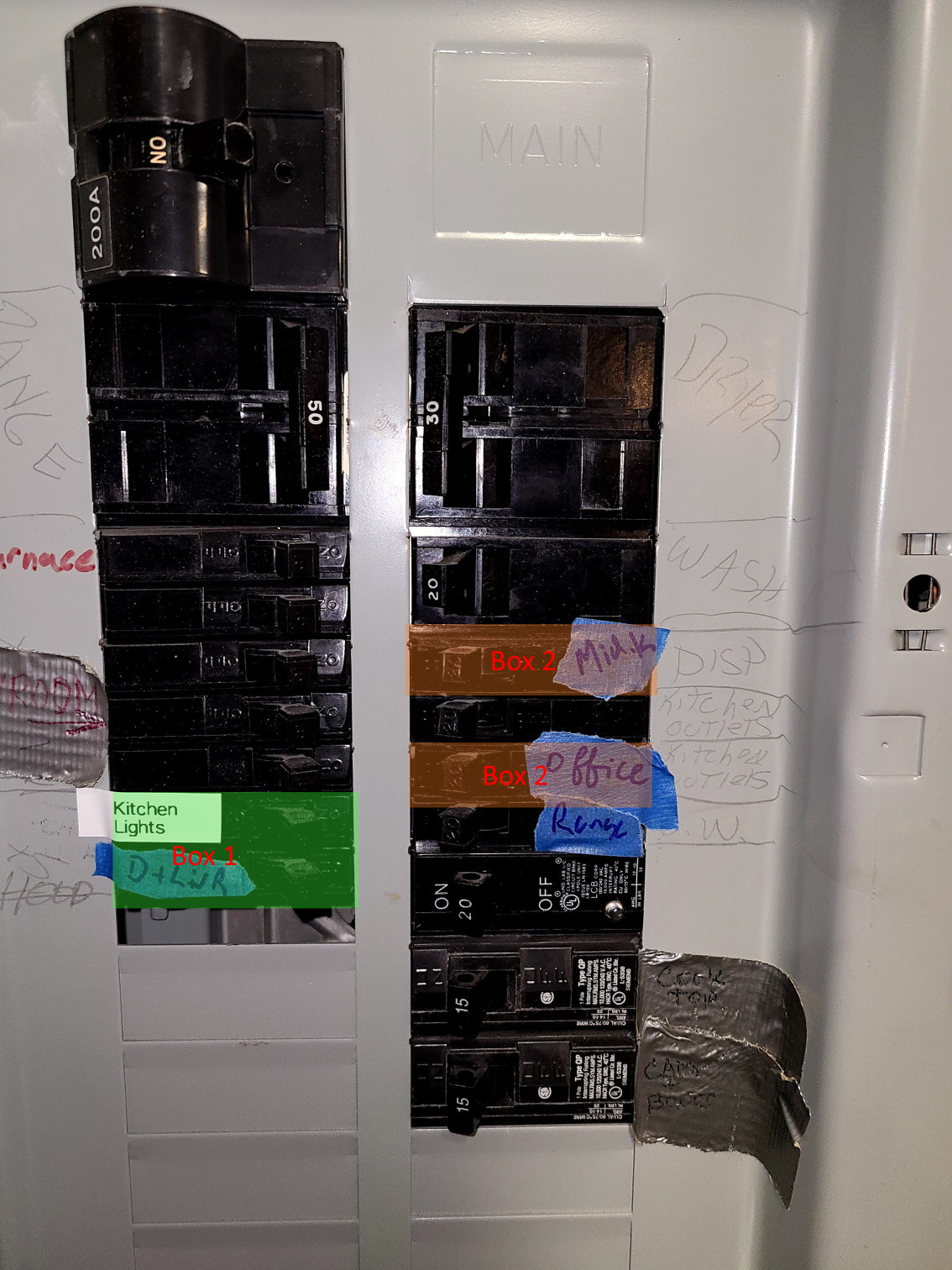 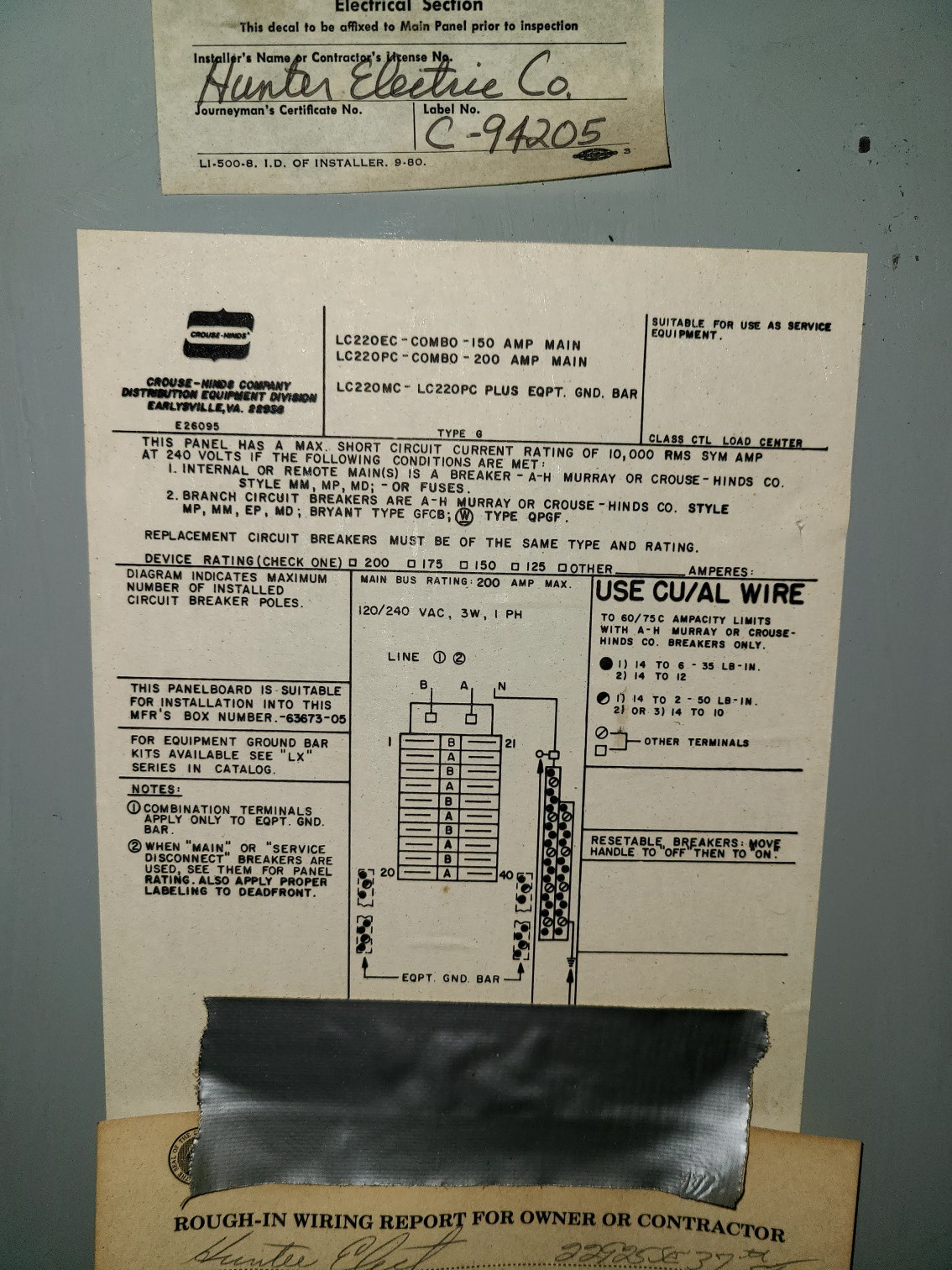 See also my treatise on how normal panels are laid out. Crouse-Hinds works like this, except for letting you "build your own duplex" using individually sold half-breakers.

That empty half-slot is quite a bad thing, however. It needs to be gotten rid of PDQ so curious fingers don't get their fingers burned off. However due to the way Crouse-Hinds does their bus stabs, this is tricky - it's not like GE where any breaker can go anywhere. With Crouse-Hinds, there are "left-handed" half-breakers and "right-handed" half-breakers. So any given half-width breaker can only move up or down one FULL space (2 half-spaces).

Crouse-Hinds left the business decades ago, which complicates breaker sourcing. Don't use anyone's breaker, use only breakers UL-approved for this panel. Eaton CL is one type which is approved, and possibly certain Siemens breakers.

All your MWBCs need handle-ties anyway. If you can obtain Crouse-Hinds listed handle-ties, that will be fine, but honestly this might be one case for using a bent up piece of #12 wire lol for a handle tie, would be a Code violation of course, but better than no handle tie at all.

The MWBC on the right column can be handle-tied by swapping the wires on the "Dish" and "Kitchen outlets (upper)" breakers. (you can't swap the breakers because of Crouse-Hinds' left-hand/right-hand thing). That will put the circuits you've labeled "Box 2" adjacent, yet on opposite poles, ready for a handle-tie.

You are probably grandfathered and do not NEED handle-ties, but for the safety of repairmen, I would consider them anyway.

A 2-pole breaker is a valid substitute for a handle-tie. Further, if you use a 2-pole breaker on a MWBC, you are entitled to put 240V loads on it -- I've had a few cases where someone wanted to run a Euro kitchen appliance, and lucky them, they had MWBCs in the kitchen and were able to upgrade them to support 240V loads.

The Code legal way to add handle-ties (if you cannot source Crouse-Hinds ties) is to replace the breakers with tie-able, or 2-pole, breakers legal for this panel. I'm not sure on the Siemens breakers, but Eaton CL type breakers are definitely UL-approved. They don't exist in double-stuff, but from the knockouts and the diagram, your panel has just enough empty spaces that you can afford to convert every double-stuff to a full.

I believe you have tandem breakers looking at the double pole compared to the other breakers, if they are tandem your setup would be ok. 4 breakers on 2 poles the left 2 are on leg1 the right 2 on leg2 they make ties to connect the outside 2 and clips or brads for the inside 2. Back when your home was built they were not required and you do not have to update them. If it was my home I would swap the wires so the mwbc was on the center 2 and cut a 6 penny nail so when it is put in it doesn’t extend below the bottom handle this will make it safer so anyone working on either of those 2 circuits doesn’t get a Wake up call from mr zap. But I would verify they are tandems so you know you are on separate legs in any case (measuring the 2 Hotta should show 240v that’s good, if 0 it will need to be moved.)

The 2 breakers being tied together on a 240v service means they are on separate legs. This is needed because if you want to work on circuit one and they were not handle tied you can get knocked on your butt or worse because the neutral is the return path and is carrying the voltage back to the source so although not required on your home it is a good idea

Having a common neutral is legal and common to do this it is called a multiwire branch circuit. Both share the same neutral. They can do this because with 240v single phase leg 1 is at the maximum positive voltage while leg 2 is at a negative max they actually cancel each other out if exactly the same size the imbalance is returned via the neutral.

With all the AFCI and GFCI requirements multiwire branch circuits are not used as often because of false trips, they they are /were used is you get a second circuit for 1 extra wire this can save a lot of $ especially with a large home or on a longer run to the panel.

There are a few issues, all at the panel though

The good news is that the wiring you're asking about is OK in so far as the two hots are on opposite "legs" of the incoming supply. If you look closely at the way the half-width breakers are arranged in your panel, you can tell that the half-breakers for the circuit-halves in question are in different, but adjacent, spaces.

Also, while handle-ties were not required for MWBCs at the time this was built, they are a current Code requirement, so there's that to clean up. This, though, is made harder by the fact that there are no current production accessories for the Murray "thin" breakers, as those were dropped when Siemens took over the product line, best I can tell. You might be able to use Siemens ECQTH2 handle ties (designed for Murray MM tandem breakers) on your panel, but it'd be contingent on local AHJ approval.

The most important issue, though, is the half-open slot in your panel, since that's a significant safety issue with pokey bits getting in there atop being a Code violation. Sadly, that too is impacted by the above-mentioned lack of accessories; furthermore, you can't handle-tie a half-width "thin" breaker to a regular breaker, which complicates matters significantly. The good news is that you could try using a GE TFH half-with filler plate, though, as all you need is something that's "substantially equivalent to the wall of the equipment".

Finding replacement breakers for your panel

According to your panel's label, you apparently have a sort of "transitional" (between Arrow-Hart and Crouse-Hinds ownership) Murray panel, rated to take Murray breakers, as well as Bryant/Westinghouse GFCI breakers, but possibly not regular Bryant (BR) or Westinghouse QP breakers, nor ITE EQ-P. As a result, your breaker options are fairly limited, and worse yet, the Siemens QP breakers currently in your panel could be seen as "alien breakers"; I would talk to your local AHJ about that particular part of the situation, though.

In any case, you should be able to use New Old Stock (NOS) Siemens/Murray MP breakers in the panel, as the Murray breaker line was only recently (within the past year or two) discontinued by Siemens. Your other option would be to use UL classified Eaton CL breakers, but those aren't made upwards of 60A or in tandem/quadplex breakers.

If you are going to replace breakers to get out of this, note that this may trigger AFCI requirements. Furthermore, while two-pole AFCIs were available in Murray MP, they are not available in the Eaton CL line. You can try talking to your AHJ about using Eaton BRCAF breakers based on the panel labeling for Bryant GFCBs, but that's another close/questionable call, unfortunately.

30
What is a tandem breaker (aka duplex, cheater, twin, double-stuff, etc.)?
8
Can two circuits share a neutral?
3
Shared neutral on the same leg
4
Wiring advice - two circuits wired to a single GFCI outlet

1
Third Wire in 14-3 Wire Showing 50V When There Should be None
0
240v double pole breaker for two 120v circuits
3
Upgrading 2 breakers to AFCI, always trips
3
Shared neutral on the same leg
3
Converting Tandem circuit with shared neutral to GFCI
2
My house breaker box have only breakers which seat only 1 wire. No seat for a load neutral. Can I still install a GFCI Breaker?
2
Can two circuits with dual function breakers share a box?
1
Converting electric receptacle with one hot and two neutral wires to GFCI
4
Attach Smart Switches to Shared Neutral
4
Wiring advice - two circuits wired to a single GFCI outlet