What type of wall construction is shown in these pictures?

What kind of construction am I looking at? How was this wall constructed and what materials is in likely to be made from? What features of the wall do these photos show? Is there anything unusual in them?

Looking to the right, along the wall: 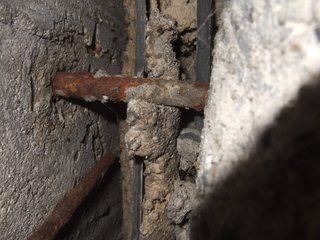 Looking up and to the right along the wall: 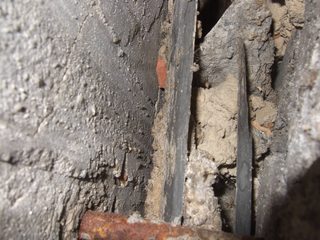 Looking steeply up and a bit to the right: 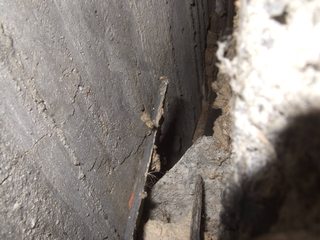 Picture of the inside of the wall in the corner of another room. The bottom 10cm of the plaster has been removed. The left is the external wall and the right is an internal wall (the corner is rounded!): 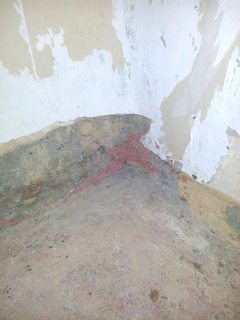 Detail of the internal surface of the base of the external wall. The hole shown in the picture was found when the plaster was removed, metal can be seen in the hole (it is not the same hole that the other photos were taken through, it is in a different room): 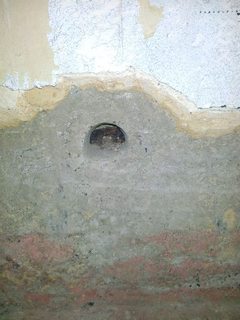 What I think you're looking at is cast, reinforced concrete construction for the external structure, with an airspace and then a cementitious "mud" or adobe with lathe ... and then a final coat of plaster.

The horizontal lines on the inside of the exterior wall comes from the pieces of wood that were used to make the form. It'd be helpful to have a picture of the outside of the house.

On the inside, the metal (or possibly a plastic or fiber lathe -- it is REALLY difficult to tell from the supplied pictures) was attached to the rebar sticking out from the wall, and then the mud or adobe was forced through it into a smooth surface a few inches thick. This could have been done to a smooth finish and stained or painted, or it could have had tile or some other material applied to it, or it could have been finished with plaster or stucco. The plaster/stucco may have been a later addition.

A similar construction today would be applying metal studs to a concrete foundation home and then putting Durock or another cementboard over it, and either finishing over it with tile, stucco, or plaster. However, cementitious mud is still extremely common as a surface to tile over for showers or floors and especially for floors is considered superior to cementboard.

This kind of construction is common in african and middle eastern homes. In fact, these pictures mirror things I've seen it in pictures of home renovations from Morocco. I imagine that any area with a similar climate would have similar construction. In most of Europe and US (or any non-arid climate) this would be very uncommon construction and would be horribly prone to mold, although it's possible that this kind of construction could have been done for a steam bath or shower in a building with foundation walls either partially or fully made out of cast concrete ... I'm thinking sauna in a basement or similar.

After further research this appears to be an example of a Forrester-Marsh house, about 50 of which were built in London. Both leaves of the wall are cast simultaneously in-situ of reinforced concrete using re-usable form-work (metal shutters). The walls ties (one of which can be seen in the pictures) are connected into the reinforcement (cast into the wall along with the formwork spacing blocks). The walls are on top of the reinforced ground slab, which is deepened under load bearing walls.

Not the answer you're looking for? Browse other questions tagged concrete walls construction or ask your own question.

1
My house has Exterior & Interior insulation. Would it be advisable to remove the internal?
0
Do vertical cracks in old plaster wall along studs indicate a structural problem
0
Proper way to brace a knee wall with hold downs
0
Alternative designs for a load bearing wall
3
Removing old cable that goes through external wall