I've moved into a new apartment for a while. Is this mold? Is it safe to continue live here?

I've moved into a new apartment for a while. Lately, I found these molds on my things. Is it safe to continue living here? Do you think a dehumidifier will solve this problem? I don't want all of my clothes and shoes to get ruined like these... Thank you for your help! 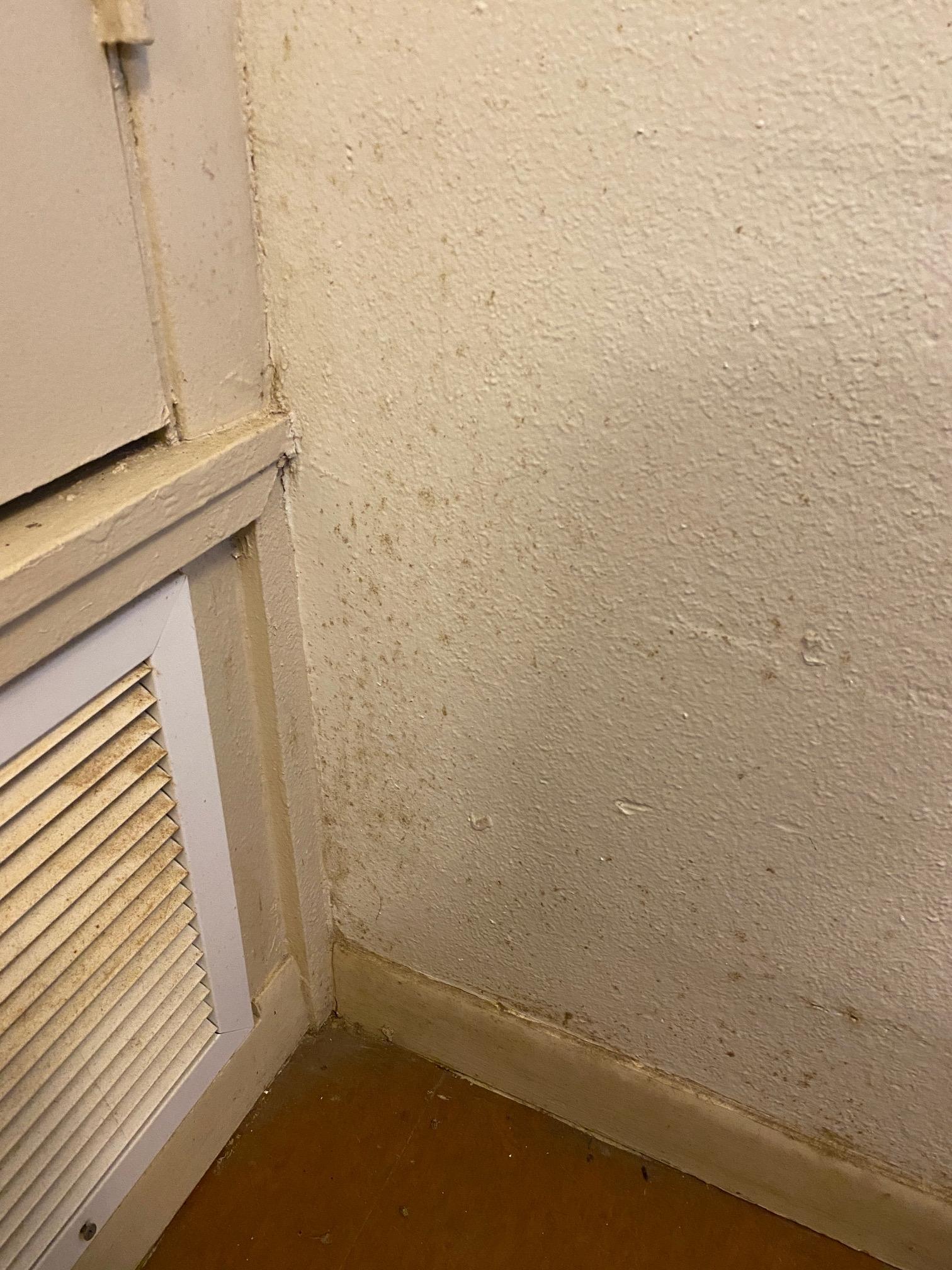 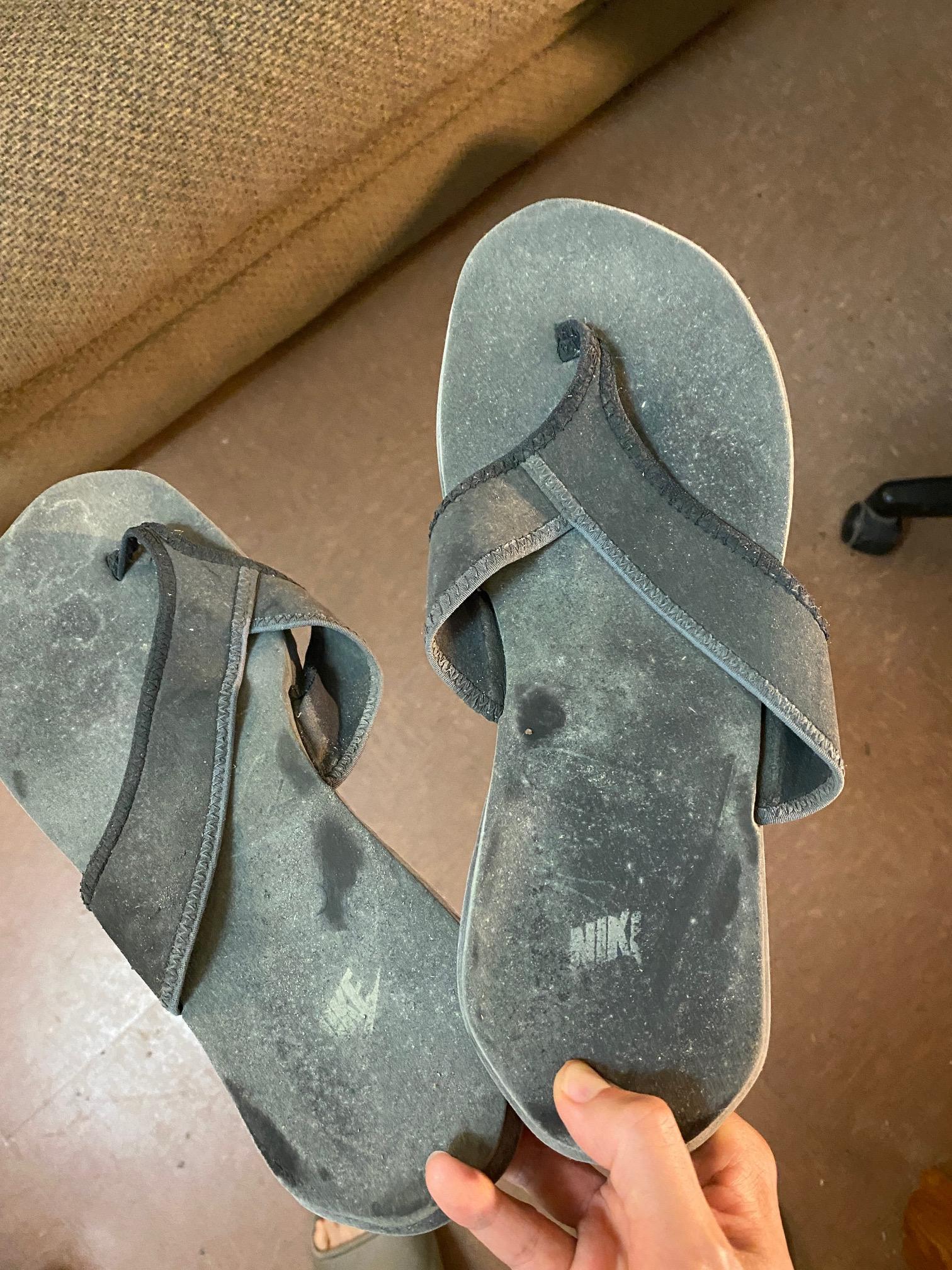 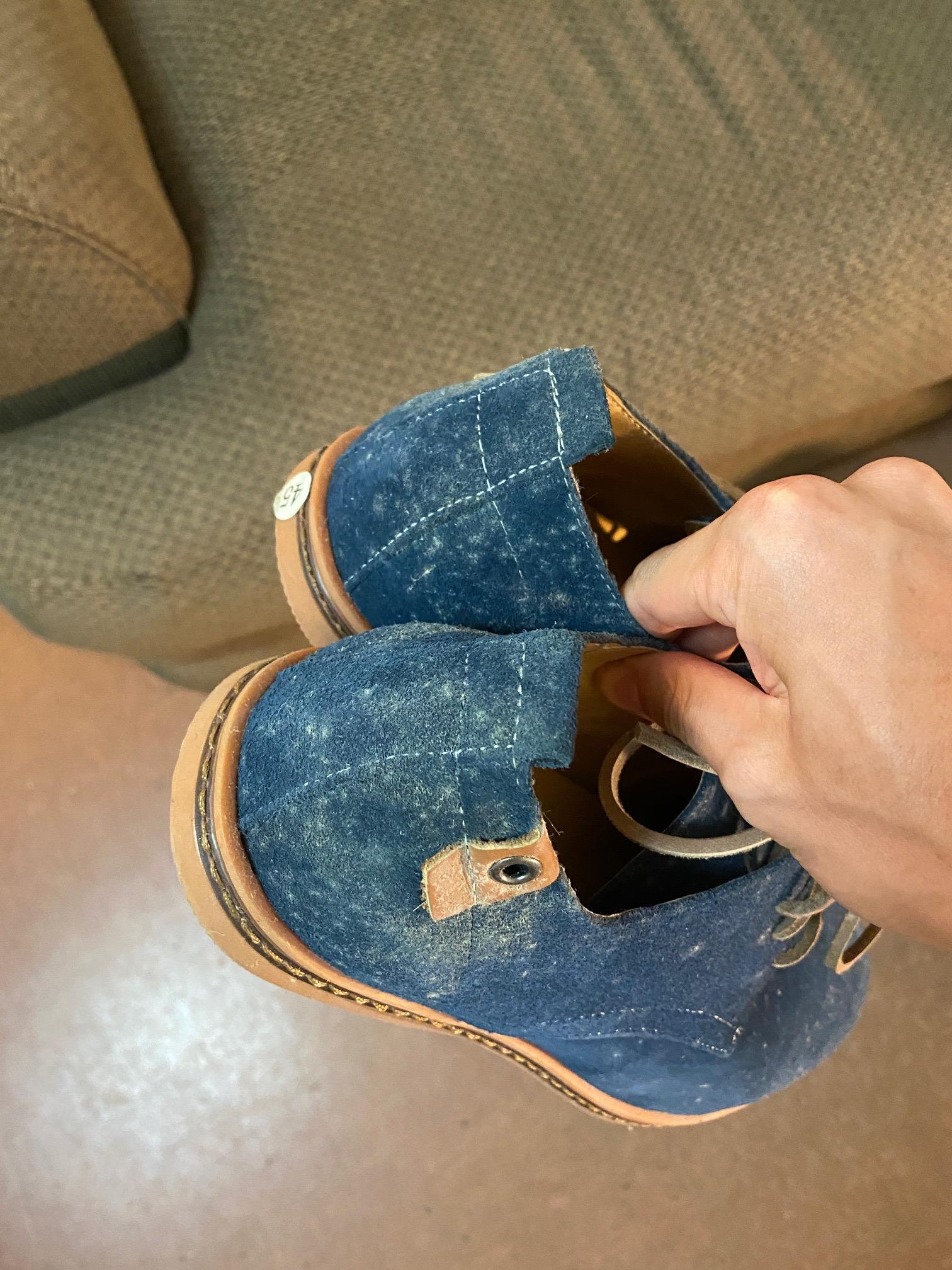 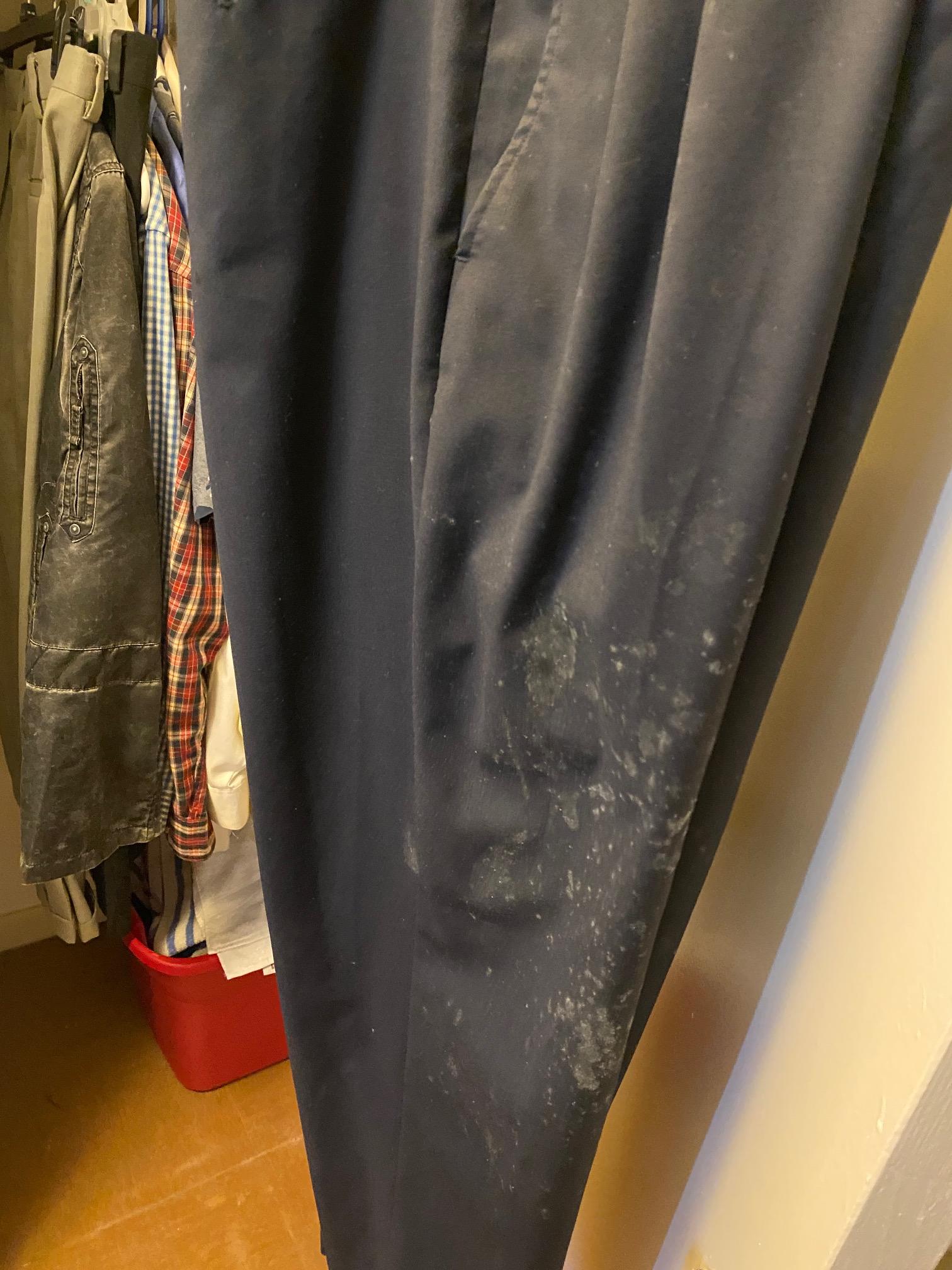 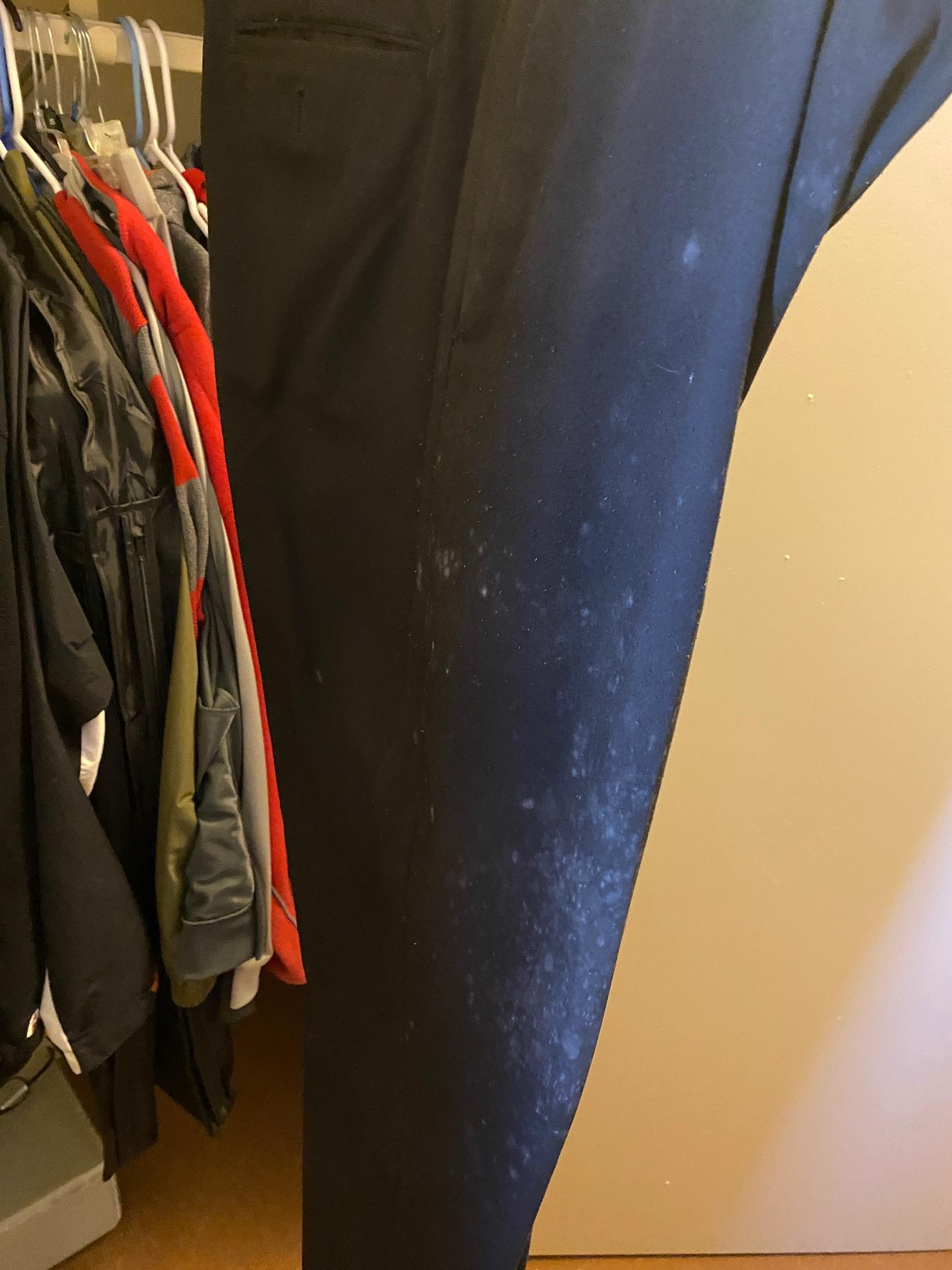 Looks more like mildew, which is related to mold, but not as dangerous (from a health standpoint). Yes, a dehumidifier could help prevent mildew. I would also look for sources of the moisture, e.g. a clothes dryer that is not venting to the outside, a bathroom vent that is not functioning (or non-existent), water leaking somewhere etc.

Yes it is mold. However it doesn't appear to be growing. It looks like the apartment had a water issue and it wasn't dried very quickly.

This surface mold can be cleaned up from most things pretty quickly with soap and water - includes walls too. I would thoroughly clean everything, air things out, start a fan, and then reassess after a few weeks.

For instance this is the type of molding you would expect in a basement that has a leaky crack about 3-5 days after a big rain. You get a lot of water in an area and it dries up slowly over time. In an apartment this could be a leak, it could be a spill, someone filling up tub and leaving it, improper venting, faucets left on, a crack (on ground level/below), and so on.

The point is the other answers might be right and you might have an overall moisture issue but you cannot assess or even guess until everything is cleaned, dried out, and aired out. After a week or two you start noticing similar things... Then you have to start taking action.

I'd get a dehumidifier.

Areas that don't have good air circulation like closets are more effected. What kind of heating system is your apartment on? Mold needs food (dust works) and moisture. Moisture issues typically arise when heating is insufficient, exhaust fans are not being used, or other sources of moisture are allowed to accumulate (wet bicycles brought inside, laundry drying inside, not keeping fans on for showers, not keeping fans on for cooking. Changes in season will also cause moisture to either come out of or go into materials so bringing the moisture level of a place down can take some time as materials (carpets, furniture, curtains, etc) release moisture to reach equilibrium.

Mold itself isn't bad, it is the spores and specifically breathing them into your lungs that isn't good for you. Depending on your pre existing conditions it can be very bad. There are mold spores almost everywhere as well, trees have mold, exterior of buildings have mold, many insects eat mold.

The most important place to not have mold is in your bedroom given the amount of time you spend there. Most bathrooms probably have some amount of mold.

Even if mold was not a concern dust mites populations and various fungi explode with humidity over 60% RH and dust mite feces is not good to breath either.

Get a hygrometer they are cheap.

All of the answers here are great! Taking a noteworthy but slightly different angle on answering it: Is it safe? I agree with everyone given the pictures you showed that it doesn't seem bad, but there is plenty we cannot see. So I always give the default "we can't know" but we can give you a good guess. How is the rest of the place and is this localized?

Just like Dr. House - (TV Show) what hasn't the patient told us? It's odd that you show a pair of pants with a "surface" level growth/staining on it in a "mid point". Where were they? Are there areas in the apartment that do not have this exposure and condition? It could help pinpoint the source. Were the pants and both shoes in front of the air vent? If this is an A/C or an overall wet area, you could be blowing around moist air. Check filters, drain pumps, and overall function of the appliances (older fridges - etc). Do you have a fish tank?

How was the apartment walls and paint and cleanliness before you rented it? Is it likely this has been an issue for a while (maybe covered up), or is this possibly cause by you (even inadvertently) leaving a window open etc.?

If it bothers you then you are probably going to consider moving. Will the owner take an interest in correcting a situation if it is not of any neglect of your own? Even if it is a structural or location issue that the owner is stuck with there may not be much they can do. A dehumidifier could get you over the finish line (just be sure to remove the water collected). This is potentially going to be a constant electric drain depending on the season or cause of the moisture. Assuming you pay the electric, its part of maintaining your space and your health. So you're the only judge on if you stay.

While you're checking out where the moisture's coming from, try a few of the desiccant products available at your home stores to absorb the excess moisture. You'll be amazed at how well they work. The one pictured below I used and placed in my closet where some mildew was growing due to a leak in the cinder block wall. It really absorbed the moisture in the closet while I was fixing the leak.

Also, clean the register shown in the picture with some bleach or white vinegar.

That fungal growth is probably not going to harm you but it'll ruin the stuff you put in that cupboard.

Now as a landlord, I've seen quite a bit of this stuff and it can have several causes.

First suspect is the tenant. For example I visit this guy to get his check, and he's cooking some pasta. While the pasta cooks, we talk, drink a coffee and he rolls a big joint then smokes it, forgetting he turned the heat to the max. The water is boiling with enthusiasm, a pillar of steam rises, then as time passes the whole room turns into a tropical misty jungle ambience. Water condenses on the walls, on the windows, everywhere. And then the guy tells me "I wonder if this apartment could have a little humidity problem..."

So... in old buildings that don't have proper, modern air extraction, most likely culprits are:

Once you make sure you're not the problem, the second suspect is the apartment itself.

If you have mold everywhere, move.

If you have mold in only a few places, then that means humidity concentrates in these places.

That could be a water leak, maybe from the roof or from a pipe, or from the upstairs neighbor. That's usually concentrated in one place. For example I had a mold problem from a leaky shower on the floor above. You can get a moisture tester for $7 on the usual Chinese sites to check if there is moisture in the wall, or you can use a multimeter on "ohm" setting if you have one. If the wall has abnormally high moisture in it, it's the landlord's job to find the leak and fix it.

Next possible cause is an insulation problem. Moisture condenses on the cold places. That's usually single glaze windows, but if a wall is badly insulated then moisture will condense there. A dead giveaway is an exterior wall being moldy while partitions/interior walls are not. If this wall is at the back of a cupboard, with little airflow, it will get even cooler in the winter and thus wetter, and stuff in the cupboard will rot. You can check for this with an infrared thermometer. If there is a cold spot in the wall it will get moist from condensation. In this case the solution is to add some insulation to the wall, which may or may not be an easy retrofit. This is also the landlord's job, btw. Note it's a good idea to check the walls with an infrared thermometer anyway. Properly insulated walls should be at almost the same temperature as inside air. If it's 10°C outside, 20°C inside, and the walls are at 17°C, the heating bill is gonna be a nasty surprise...

You can also get a dehumidifier. But if the source of your problem is a lack of insulation, that won't do anything for your heating bill.

Not the answer you're looking for? Browse other questions tagged safety mold dehumidifier or ask your own question.

0
How can I protect the wall behind a closet from developing a mold problem?
3
Why did my surge suppressor make a "pop" sound when I plugged something in?
4
How can I remove humidity from a room without a dehumidifier?
2
Air Quality Concern in Apartment
2
Is this mold in my apartment?
0
How can I keep my computers cool in a 100 degree house?
12
What should I do about mold in a new build?
1
consumer-grade modified atmosphere storage?