How do I seal the sink basin opening?

I purchased a new bathroom sink and faucet and set everything up according to instructions. The faucet instructions told me to use silicone for the drain lip (the border thing around the stopper in the bottom of the inside of the sink, flange?).

Anyways, underneath where the pipe comes out is a rubber gasket and I've used the plastic screw on the drain pipe to seal the gasket against the underside of the sink, but when I put a little bit of water in it, some water leaks out from between the gasket and the sink. I've tried tightening it as much as I can and it still leaks.

Should I be putting silicone or plumbers putty between the gasket and the sink? If possible, I'd like to avoid taking the drain lip off because I've already sealed it there. What should I do?

Here is a picture of the underside of the sink: 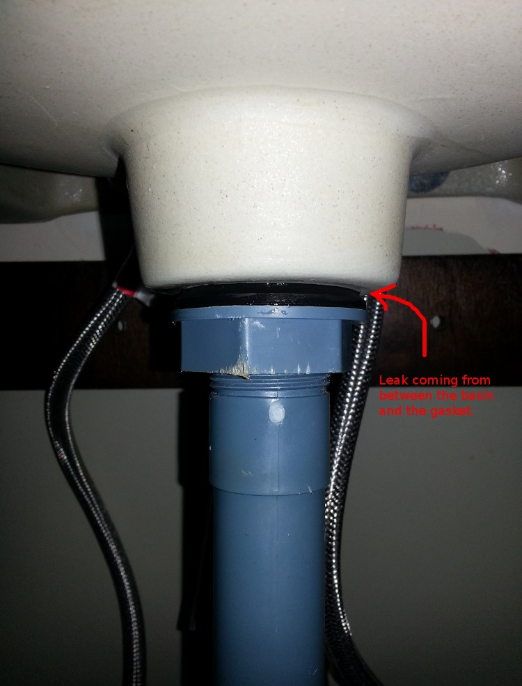 UPDATE: It turns out (haha) that the problem was that the rubber "washer" was actually threaded itself. I'm not sure if they are always like this, but I didn't realize that it was threaded when I was assembling everything. So I assume that what was happening originally is that when I didn't have the rubber washer close enough to the basin when I started tightening the nut (blue) that it was moving the the threads out of alignment or something and not making a good seal. Once I turned the washer a few turns upwards, then tightened the blue nut, it made a proper seal. All without using a bunch of puttey or silicone.

UPDATE2: So it has been 10 months and it hasn't leaked. Problem solved.

UPDATE3: It's been 8 years and it hasn't leaked.

It should not be necessary to try to goop some type of sealer around the lower neck of the sink drain. Such solution may work but it is not the desirable approach when you consider that someday this assembly will need to come apart for repairs.

In looking at the assembly that you have I wonder if one or more things are at play here.

1) If the drain pipe tail was not centered in the neck of the sink drain and then had lateral force on it due to the down stream goose neck trap it could be forcing the gasket open on one side. Check that there is no undue large amount of sideways pressure on the lower part of this pipe assembly.

2) It looks like the gasket directly contacts with the face of the capture nut around the drain pipe. It is possible that by tightening the capture nut that it is putting a twisting force on the gasket that may cause it to "fold away" from the sealing edge of the sink neck.

3) It is possible that there could be a small crack or pitted area on the sink neck that keeps the rubber gasket from engaging 100% with the sink neck.

4) Sometimes the "rubber" used in this type gasket is made of a plastic material that is anything but rubber. Check at the local hardware store to see if they have another gasket that is more pliable. In some cases a silicon material may be better.

I had already stripped all of the caulk I had laid in the sink drain and re-applied it once, and I was about to lather caulk all around the gasket in desperation before I tried this method very carefully, but now haven't seen a leak in a month since.

Although it may seem like a lot of work, the best option is to take the drain apart and reassemble it. Trying to patch the leak will likely only stop it for a short time, you'll then end up with a possibly unnoticed leak sometime in the future. This unnoticed leak can lead to massive amounts of water damage, and far more work in the future. Do it right now, and never worry about it again.

Silicone is great stuff and is very useful for a lot of things, but it is not the fix-all-do-everything product people like to think it is. As you've seen, silicone is not the best option for sealing drain flanges.

Unless I'm very much misreading the picture you've installed your drain assembly incorrectly.

It looks to me like you've got: sink washer gasket nut

you should have: sink gasket washer nut

I was running into the same problem of a small leak around the sink neck and gasket. It seemed to be from culmination of many things - poor sink neck, slightly crooked angle of connecting pipes and my tightening the plastic screw nut too much. So, I did run some plumbers putty around the gasket prior to screwing it in place (wow, that was much easier than sliding it), using a second gasket, then washer and plastic screw nut. Not sure which change actually fixed the problem, but so far so good. You could see from the old gasket that the pressure on the gasket was not even as one side was much more indented than the other.

The sink neck is poorly made, allowing small leaks of water despite the gasket. Use plumbers putty to compensate for the shoddy sink neck.

Finding out why these leaks happen can be a pain, and you may not have the patience to take everything apart and inspect as to the cause of the leak. Try running a string of plumbers putty around the outside of the gasket and see if that stops the leak.

It is the quickest and easiest way to resolve a leaky gasket.

1
How can I reattach a drain pipe that detached under the sink?
2
Major issues fitting new drain to bathroom sink
2
What should I use to seal the ball rod on a pop-up sink drain plug?
0
How to tighten sink faucet?
4
How to seal straight-thread faucet shank / nipple to the faucet?
2
Leaking drain joint in reconstructed pipes under new kitchen sink
0
I can’t stop a tail pipe leak after installing in bathroom sink
1
Leaking sink drain. Possible defective drain assembly?
0
How to fix leak in bathroom sink at rubber gasket of drain assembly