I recently moved into a house in the western US built in the late 1950's. Most of the receptacles are two prong and don't have any ground wire running to them. I would like to have three-prong outlets so that I can plug in modern appliances and devices and so that things are as safe as possible.

From what I've read, including here, some of my options are put circuits on GFCI's and labeling them "no equipment ground" (either a GFCI receptacle at the beginning of a circuit, or use a GFCI breaker), run a separate ground wire to the receptacles, or pull a new wire to all the receptacles.

As I understand it the GFCI option is just as safe as having an earth ground except for two issues: 1) surge protectors (or surge protection inside grounded equipment) can't function without the ground, and 2) I may be hunting around to reset GFCI receptacles more than in a house with fewer GFCIs.

Edit: The service and main panel have been updated relatively recently (I don't know exactly when, but I'm fairly certain within the last 20 years) with 200A service and modern looking GE main panel.

I'm thinking of putting most outlets in the house on GFCI circuits and running new (grounded) wiring to a few outlets where there will be electronics with surge protectors or three-prong cords.

This is a picture of the panel. There's a service panel outside that feeds this panel (with a 150 A breaker I believe) and directly feeds the outside AC compressor. 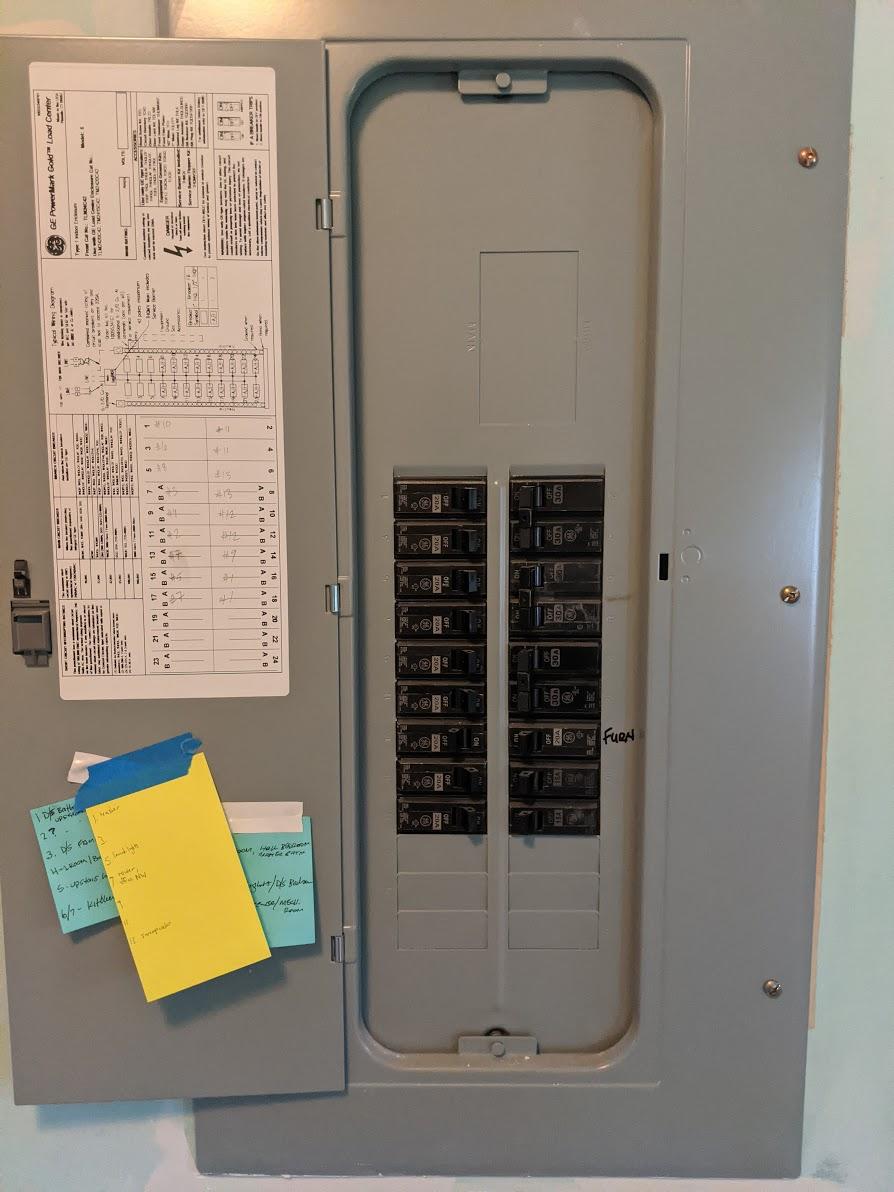 Your plan is solid and well thought out in my opinion. The one thing that may give you problems with GFCI receptacles is wire fill and box size. GFCI receptacles are big and sometimes a real bugger to get in some locations just be aware of this but I prefer GFCI’s locally even when they are tight.

You don’t have to pull a ground for every circuit back to the service panel you can run 1 ground from the panel to a central location and splice other grounds from there to your receptacles, this method is allowed as long as the circuits all come from the same panel. This is a fairly new change and makes running new grounds much easier.

Replacing the wire is it needed? I have worked on much older homes that the old cloth was in surprisingly good shape, where we run into issues many times is the service panel or lack of a modern panel.

There are some panels I will only remove there are a couple of brands like FPE stablock (federal pacific) another brand Zinsco if in good shape I recommend replacement but will still work on these. Anything with screw in fuses I recommend upgrading to a modern panel and other panels that the companies went out of business and we cannot get GFCI or AFCI breakers.

So if your wiring is in good condition is it required to be replaced? The answer is no knob and tube wiring is still allowed but if you can afford it it can be just as easy in many cases to pull new wire compared to just a ground wire. If the wiring is in poor shape electricians have ways of working with it but trying to keep from pulling new wire thinking that will save $ cost more in time.

If you can find a electrician that is good with replacing old wiring you may find only small patches are need at mid wall or that’s what I do to minimize the patching and that may be needed to bring the grounds to the circuits with surge protection.

If you can post clear photos of your service panel we can advise you on that also.

Not the answer you're looking for? Browse other questions tagged wiring gfci grounding or ask your own question.

6
Can I obtain grounding from a different outlet?
3
What options are there to achieve both grounding/ground-fault and arc-fault protection on old 2-wire circuits?
0
USA outlet states not grounded from surge protector for all outlets in only 1 room in my house
2
Grounding to the box and 3 Prong Receptacles
3
Do GFCI breakers provide necessary protecting for multiple outlet surge protector?
2
Safety differences between the various types of outlet (two-/three-prong, grounded/ungrounded, with/without GFCI)
0
AFCI receptacles vs GFCI receptacles for non-grounded outlets
18
I live in an older home without ground wiring. Is it safe to install 3-prong GFCI with only a hot and neutral?