I have a couple pocket doors I replaced a couple years ago in the summer. One door is between a powder room and full bath, the other is between the master bedroom and the same full bath. They're the Jeldwen pre-primed, 6-panel doors from Home Depot.

I hadn't painted them right away, and noticed as fall approached, the door between the bedroom and bath was binding up. I took the bow out by removing the door, lying it flat and placing some weight on it until it was straight again. I also took the time to paint both doors.

Everything was fine up until now, now that it's changing from summer to fall again. This time it will rub and eventually bind up and scrape the the pocket door frame and leave marks in the door.

Anyone have any ideas what's causing this to happen and how to prevent it? Thanks for the help. 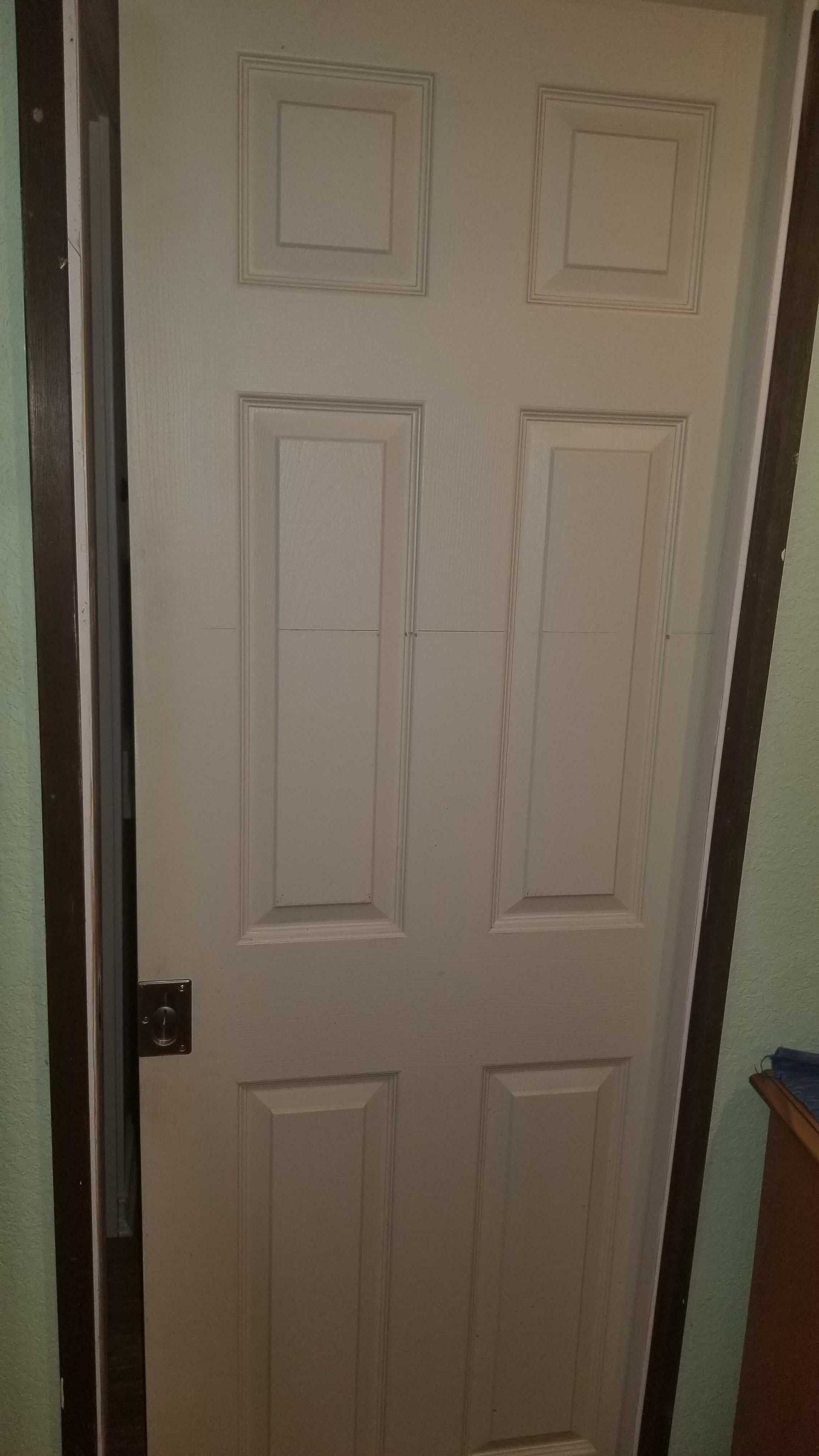 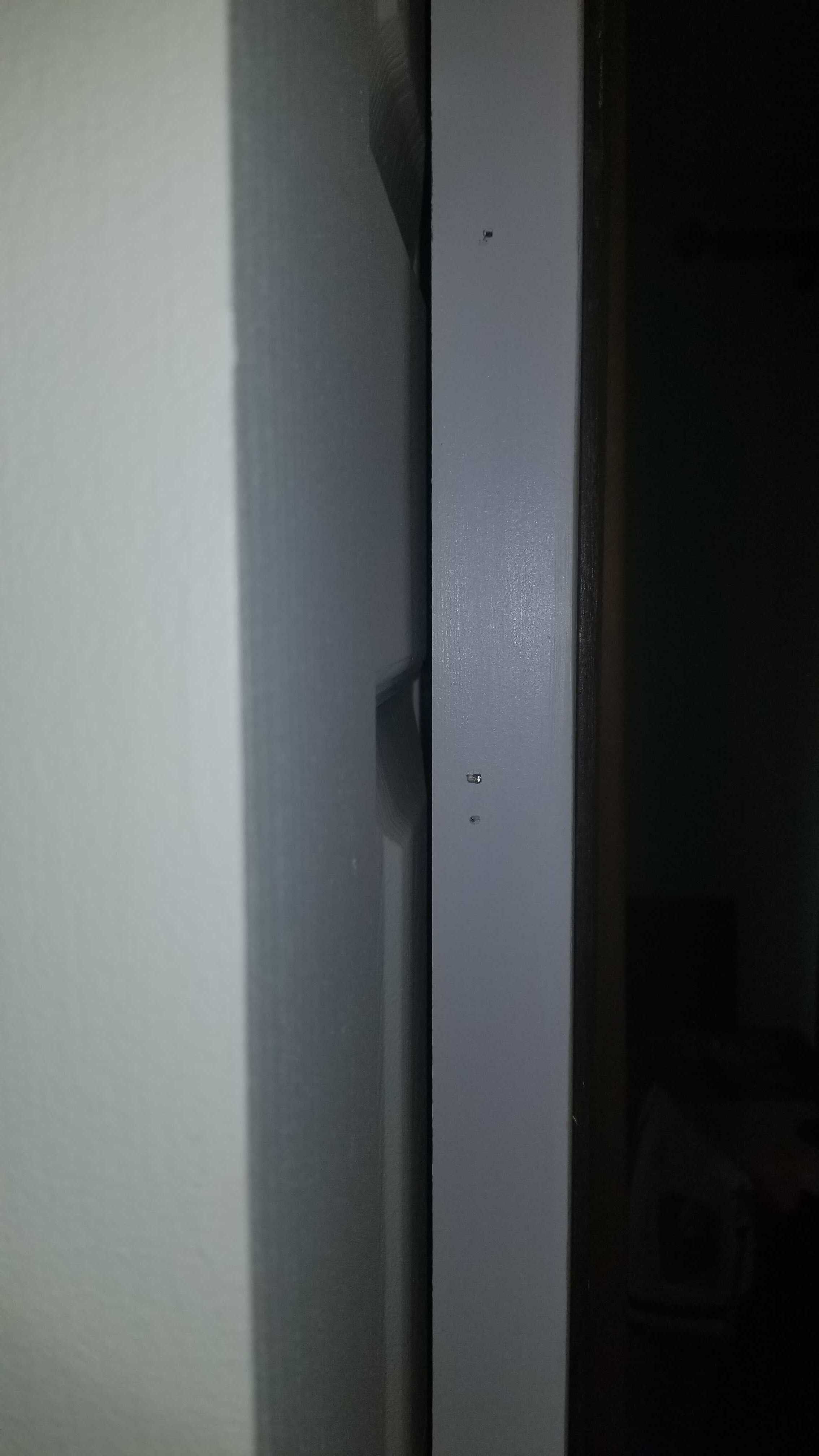 this is the bedroom side of the door showing ample gap 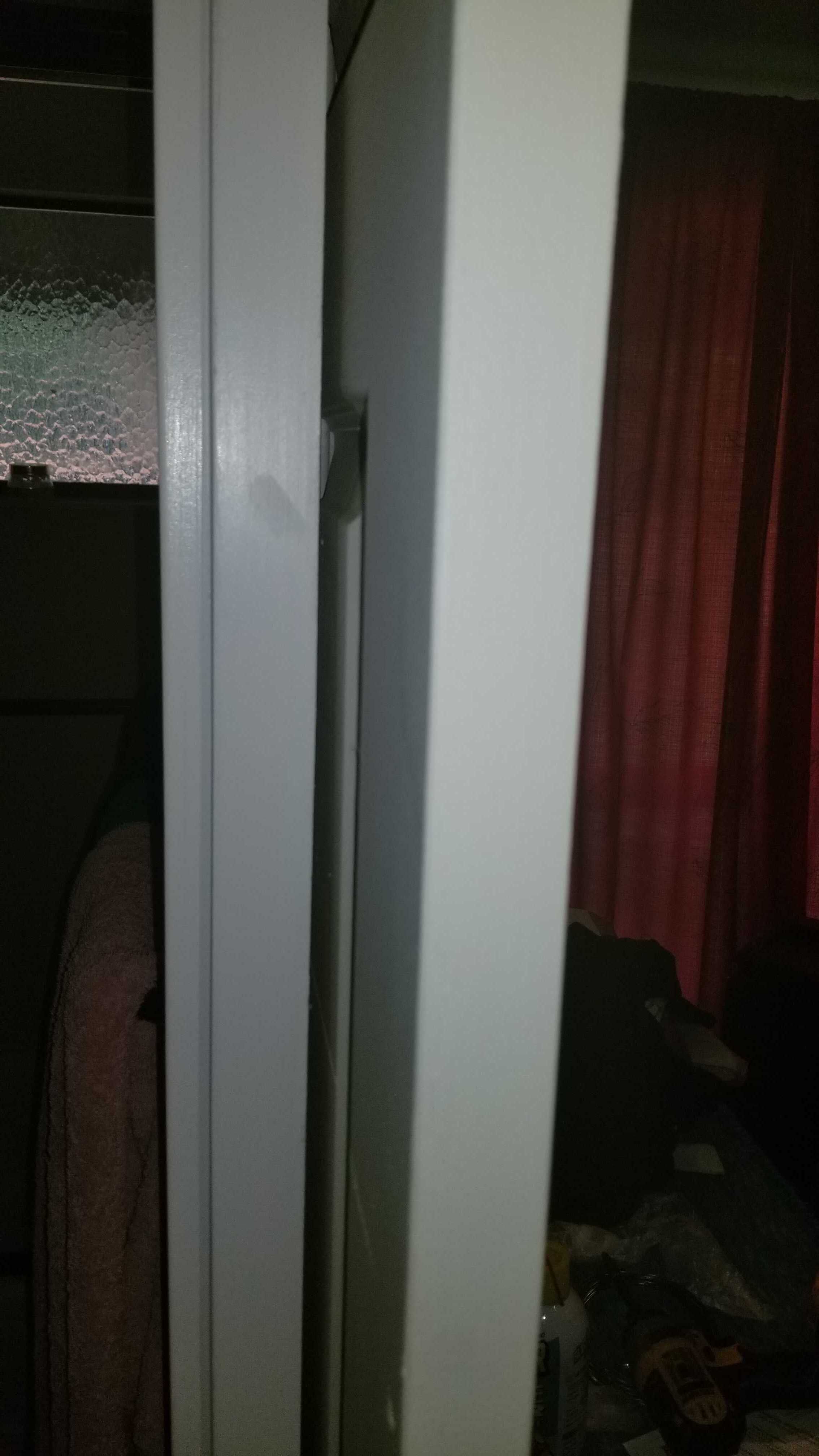 this is the bathroom side of the door showing ample gap

Do the doors warp seasonally, or do they flatten?

It's worth considering whether there's any natural bow in the doors. They could have a manufacturing defect or they might have been been damaged by exposure they've faced. For example, when weights were used to force-flatten the doors, what happened mechanically within the door? Suppose that the adhesive holding the skin to the internal structure shifted. Now the door would be flat when moisture is imbalanced and it would warp the other way when moisture in the two faces is balanced.

If you can bear to have the doors removed for a while you could temporarily move them to a place where they'll have equal temperature and moisture exposure on both sides and find out whether they flatten. Propped up against an interior wall in a bedroom might be a good place. I have no idea whether it'll take days, weeks, or longer for them to relax.

What would cause moisture difference between door faces?

Maybe the answers to some of these questions will help identify what could cause moisture changes.

What to do about the situation?

This depends on whether the doors are naturally flat or naturally bowed. You can, and probably should, address any of the situations highlighted by the questions above. All things considered it's probably ideal to have the moisture level in the bathroom match the level in the bedroom and the rest of the house. Maybe an adjustment of habits is called for, or maybe installation of an exhaust fan or adjustment to HVAC equipment or ducting.

Another possible solution is to replace the doors. Next time, buy a solid wood door rather than a hollow core. Door slabs can be ordered with no lock or hinge prep. The 6-panel design is fairly common; you can probably order a solid wood door slab that can be trimmed to work with the existing hardware. When checking the size, don't forget to verify the thickness of the new slab!

Not the answer you're looking for? Browse other questions tagged doors painting pocket-door or ask your own question.

4
How do I adjust the gap on interior French doors?
5
How to deal with seasonal expansion and contraction of wood indoors?
0
Door Casing Gap Against Cement Board
2
Brand New French Doors Installed By Contractor.. Leaks same day. Is this normal?
0
How to prevent two doors from opening into each other?
1
Adjusting deadlatch so it doesn't fall into strike pocket
0
Front door won't fully close or sit flush
0
How should I paint an exterior door to prevent sticking?