How to keep plastic concrete screw anchors from spinning?

I keep on getting these concrete anchoring kits in floor safes that consist of a 1/2" plastic insert and lag screw. (see photo)

The instructions say to drill a 1/2" hole in the concrete, tap in the insert, and drive the screw in. So I hammer-drill the hole deeper than the screw length, suck out the dust, tap in the insert, start driving the screw, and as soon as the threads of the screw engage the anchor ... the plastic anchor just spins in place.

(Then I have the irritating task of trying to pry the bolt and anchor out before going to buy proper concrete sleeve anchors.)

Is there a way to get these sorts of anchor sets to work in concrete holes?

Or should they just be avoided at these larger diameters? 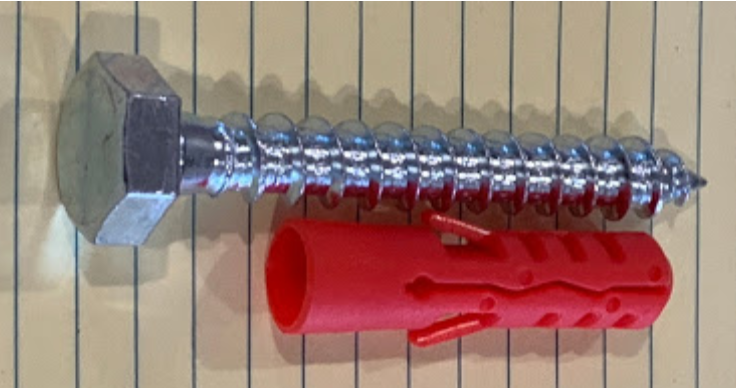 Since you mention these come with floor safes, I'm going to guess that you're using these to anchor something.. a safe, perhaps.. to the floor. I'll also guess that the objective in anchoring the safe to the floor is to prevent the safe being lifted and carried away.

These plastic anchors seem like they're semi-acceptable for a shear application such as something low-profile mounted to a wall. The only force the anchor experiences is the downward pull of gravity.

For an application where pull-out strength is required, like a safe containing valuables mounted to a floor to deter the safe from sprouting legs and walking away, the anchors made of relatively slick plastic just aren't a great solution.

This reminds me of an anecdote I heard an uncle tell when I was a kid. He shared a lengthy process for reconstituting powdered milk so that it would taste good and not turn out lumpy. The process culminated with "dump it down the drain, go to the store, and buy a bottle of fresh milk."

A better solution for your situation is to recognize that the safe includes cheap hardware and it's OK for you to discard that and use something better, especially since it sounds like you do this often.

As for "what's better, then?" It's infrequent that I need to anchor something in concrete, but following are a few anchors I've liked (credit for all photos to www.confast.com). They're available in a variety of sizes; the sizes pictured here are just what Confast had on their home page at the moment.

This product screws directly into a pre-drilled hole. Not much help for your current situation, but maybe useful for next time. Removable, at least in theory.

The cone-shaped end forces the collar outward against the concrete. Easy to cinch something down tight against the face of the concrete. Permanent. Instead of eventual removal, these can be hidden in two ways. Plan ahead and drill the hole extra deep so that the anchor can be driven fully into the concrete later when it is longer wanted (be careful not to lose the anchor into the hole during installation!) or else plan on cutting off the protruding portion. 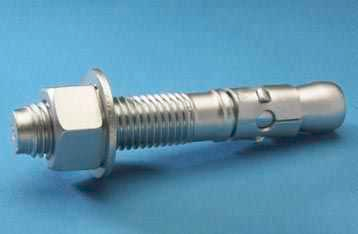 The anchor itself is permanent, but it accepts a machine threaded screw/bolt which can be removed. If I remember correctly the bolt can pass all the way through the anchor. The anchor's expansion is fairly well-bounded so it's important that the hole be the right size. 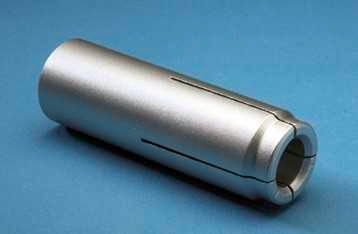 Also available in a single-expansion version. Similar in function to the drop-in, but expands along the whole length of the anchor (and, I think, more forgiving as far as the hole diameter is concerned). It's been a while since I used one of these, but I think the bolt passes freely through one end of the anchor and threads into the far end. As the bolt is tightened the top end of the anchor is drawn up against the object being anchored. Eventually the pinch between the object and the far end of the anchor, caused by tightening the bolt makes the two wedge bits spread and bite into the walls of the hole. 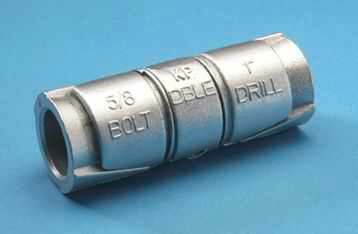 Throw the red shields out and get some metal lag shields at your home store similar to the one below but the correct size. 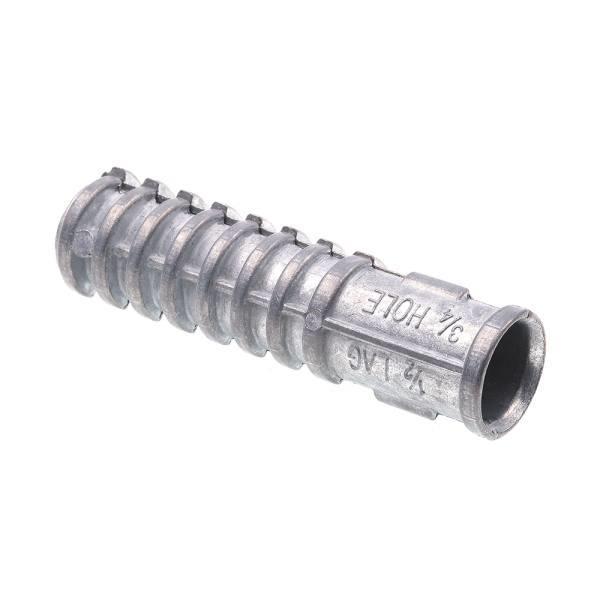 Not the answer you're looking for? Browse other questions tagged concrete screws anchor or ask your own question.

1
repairing concrete damaged by anchors
0
Best way to remove anchors from concrete?
1
What type of anchor for fastening to block wall?
0
Unable to screw completely into plug/anchor
0
Sleeve anchors not going all the way in?
1
Can I use lag screws, lag bolts to hang swing vertically from a wood beam?
0
Anchors for concrete - what to use on a concrete ceiling?