I used incorrect nomenclature in a couple places, and I made a couple assumptions that are not wise assumptions to make. Original answer is below, corrections here. I'm thinking the question title should probably remain unchanged (mods?).

I'm disappointed there's no UL-listed way to accomplish my original intent--but no more disappointed than I'd be to arrive home and find a fire truck on my lawn. Thanks to JACK (and especially Harper) for the corrections and alternate ideas. I'll answer this myself once I decide on and implement a solution. It's no emergency, so this may be awhile.

I want a (110v) pilot light to indicate my closet light has been left on.

The switch box has only a single of each: hot, neutral, ground--no wirenuts--so it's downstream. Therefore it seems anything I connect in this box will be wired in series to the light. Is there a way around this?

I stole this image from Joe. It's nearly perfect, but IIRC the lamp fixture also had a ground terminator. 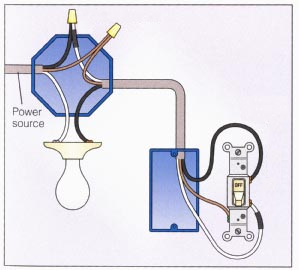 I want the pilot in the (single gang) wall plate as found in a review of this item, which I've purchased. 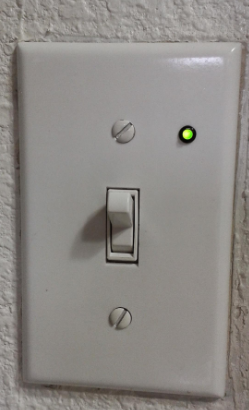 This little LED has only 26-gauge wire, likely making a series connection an unwise overload risk. Heat shrink conceals something on one of the leads, and I don't know what it's for. I suspect it regulates the AC current for directional flow--do LEDs require this? 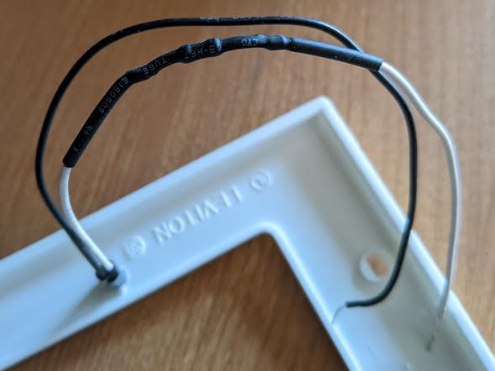 I've already mounted the LED in a plate, but my final solution doesn't necessarily require this specific LED. I do like the small size and its brightness.

I have several larger, red ones that are not this specific item but look the same to me. I could use one of them if necessary. 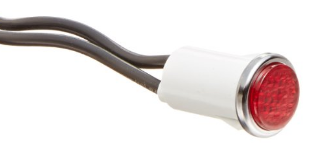 My red LED has 18 gauge wire, so I tried wiring one in series. But the closet light only flickered (far slower than 60-cycles) while the LED indicator turned on. The housing is easily spacious enough to contain whatever is lurking in the other's heat shrink. So maybe my directional current hunch is correct, and certain components in each light (indicator and fixture) conflicted, resulting in the flicker.

Both LEDs light up when I just stick them in an outlet, so I assume there's no malfunction with either one.

Finally, I'd rather this look good when finished; it's in my master BR. While Decora is preferable, I can settle for the traditional style toggle. I'd prefer to avoid an industrial-looking switch: 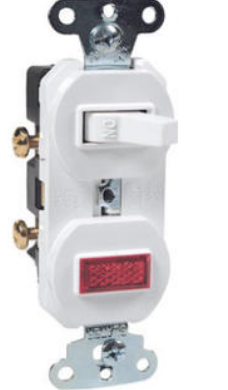 My closet light switch is outside the closet, and when I'm in a hurry I tend to close the door without remembering to turn off the light. It's easy to miss until returning at night when the light is visible under the door.

Lately that's happening more frequently, and it's stressful coming home to learn I've wasted ten hours of electricity. The closet light is an LED, so this is more for principles of efficiency, conservation, and peace of mind than actual money loss.

The closet light is an LED (not incandescent), so it's probably inadvisable to "cheat" and repurpose the ground as neutral--but I'm open to suggestions from someone smarter than I am. The walls and ceiling are finished, so pulling wire would be enough hassle to cancel the project--I'd rather install a pull-chain switch inside the closet and replace the existing wall switch with an in-series jewel light.

I initially sought a manufactured solution, but I'm flummoxed by how many "nightlight" variants are available and yet I can't find a wire-and-go switch where the indicator turns on while the load is powered, even aside the series vs. parallel concern.

I'm confident if both the closet and pilot lights were incandescent they'd work in series--but that seems a step backward after upgrading to more efficient LEDs. Then again, leaving an LED on long enough spends as much money as an incandescent that's always noticeable enough to turn back off when I'm done. :,/

Several DIY SE questions look very similar but differ, with this one being the closest I've found--his intent similiar to mine. My initial thought of using a double-pole switch was mistaken--as I'm still downstream from the light--so I'm struggling to conceive a non-series connection.

There's probably enough room in the junction box for a small transformer; if I give up on 110v I might search for a DC LED with a small power supply, rigging that instead. Of course I'd first leave it plugged in somewhere for a week to ensure it wouldn't overheat. That seems to be the very-long-way-around solution, but I suppose it'd work. I expect it would also draw more current than the other solutions, negating its own benefit.

Seems like this should've been a ten-minute-trip-to-Lowes solution, and I've already killed a million brain cells over it. Thanks in advance for any guidance here.

Your wiring configuration is an old style switch loop, which does not provide neutral.

To stop killing brain cells, stop violating Code. Any solution that violates Code, cross it off immediately: kill it with fire before it kills you with fire. All that stuff you saw in Amazon reviews and Youtube videos are jackasses trying to burn their house down (plus, they weren't on a switch loop like you are).

Also, everything you use must be UL-Listed as equipment for AC mains use in houses. Not RU-Recognized as components. Especially, no using random bits you got off Alibaba (Amazon Marketplace is basically Alibaba, so is eBay, Banggood etc.)

You want this instead 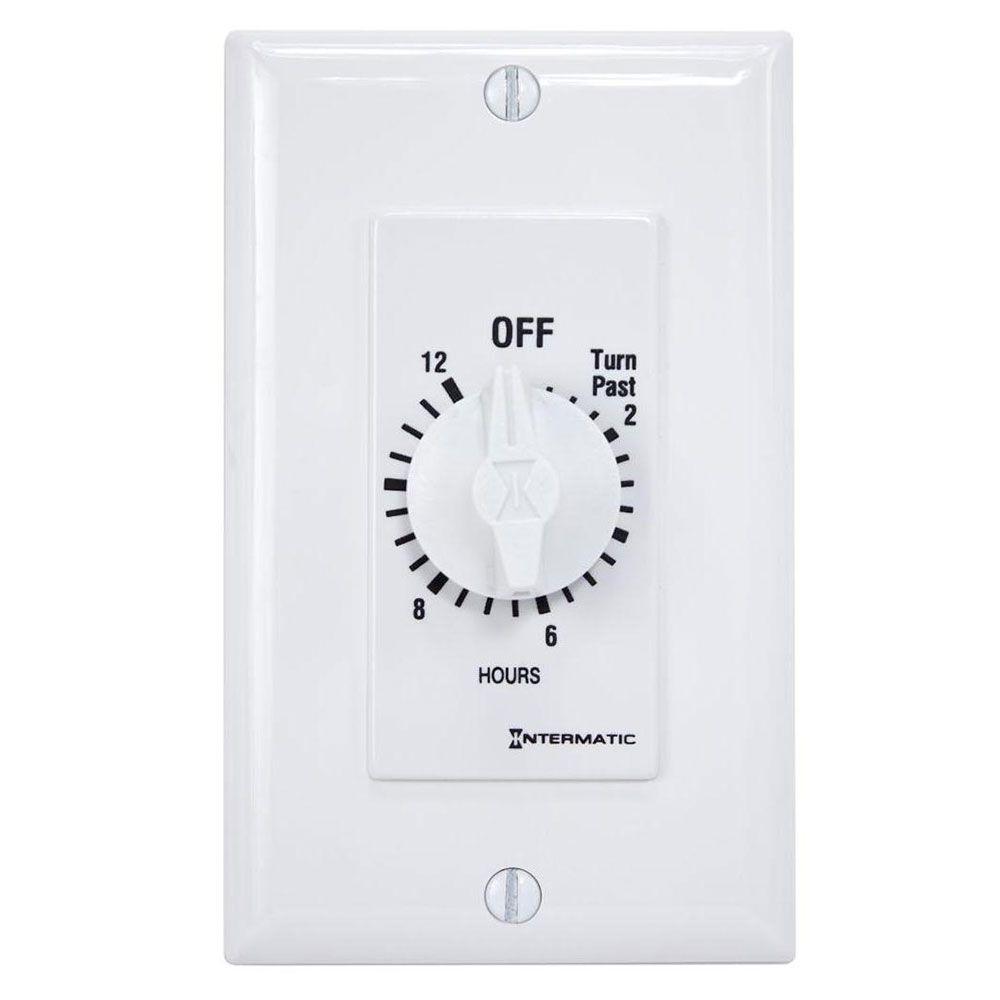 Get a 5-10 minute one, and get one with a "hold on indefinitely" position if you want that. You can use the electronic push button variety if you find one that does not need neutral (they are out there).

A commercial pilot light is right out

The problem is, they all need neutral, and you don't have it on a switch loop.

It is perfectly allowable to attach a UL-Listed low voltage power supply to a light, if the light provides a legal wiring method to do that. For instance many companies make 24 VAC transformers that go in a common round knockout. From there you qualify for the very much relaxed low voltage rules in NEC. Now you can use /2 thermostat wire to carry 24VAC or other voltage to wherever you see fit to have any kind of an indicator.

There is one gotcha: you cannot intermix or commingle low voltage wires with AC mains wires. You will note any of the knockout-mounted transformers will provide for the low voltage to be outside the knockout. So what is Right Out is to install a low-voltage LED inside the AC junction box.

Or just go LVDC for the whole kaboodle

Honestly, given the low power requirements of LED lighting and the ready availability of 12/24 VDC LEDs, there's no reason not to just make the entire lighting branch low voltage — the closet light, the switch leg, the switch and the indicator.

You need a UL listed power supply in the closet, but after that, you have a great deal of latitude. (but still not Alibaba).

There is one snag: most consumer switches are not UL-listed for any DC voltage.

You can reuse the /2+gnd Romex cable for low voltage power, as long as you have partitions inside the junction boxes. Using wire and cable for low voltage that was intended dor AC mains wiring is fine. It would be a Code violation to use safety ground for ordinary operating current, though.

Not the answer you're looking for? Browse other questions tagged wiring usa saving-money indicator or ask your own question.

2
How do I wire a switched outlet with the switch downstream?
0
Adding a pilot light to a light switch