My house is a 1960s build and has no gables, every exterior wall has a roof slope to it.

In the kitchen, most rafters are North-South, with the East end being angled down until it meets the garage. West leads to the rest of the house, continuing North-South rafters. Joists are 2x6 at 13'7", running East-West.

The [EDIT: single] Southernmost joist, however, is a 2x4 that only runs to a short (32" from outside wall) dividing wall that was at the end of the counter/soffit. Inside the soffit every-other rafter is tied to the full joist 32" from the exterior wall, to provide support for the over-sink soffit. ("Tied" being "nailed to the side of the rafter, possibly the top plate, then end-nailed into through the joist.")

I removed the soffits and the dividing wall, and found out the hard way about the short joist. It's roughly 6" from the first of the perpendicular supports for the former soffit. I have 4 solid 8' 2x4s from the dividing wall I can use to add new structure.

Is there a way to tie the short joist into the next perpendicular support without tearing out the ceiling and replacing it wholesale? My initial thought was use screws to laminate 2 12" boards and a 6" board as an extender to reach the support. Second thought was to use a 2x4 the same way the soffit supports were built, from external wall across the end of the joist, and then nail to the 2x6 joist.

This and a little electrical work are the last bits I have before inspection, so I'm hoping for the miracle of fast, easy, cheap, and right. 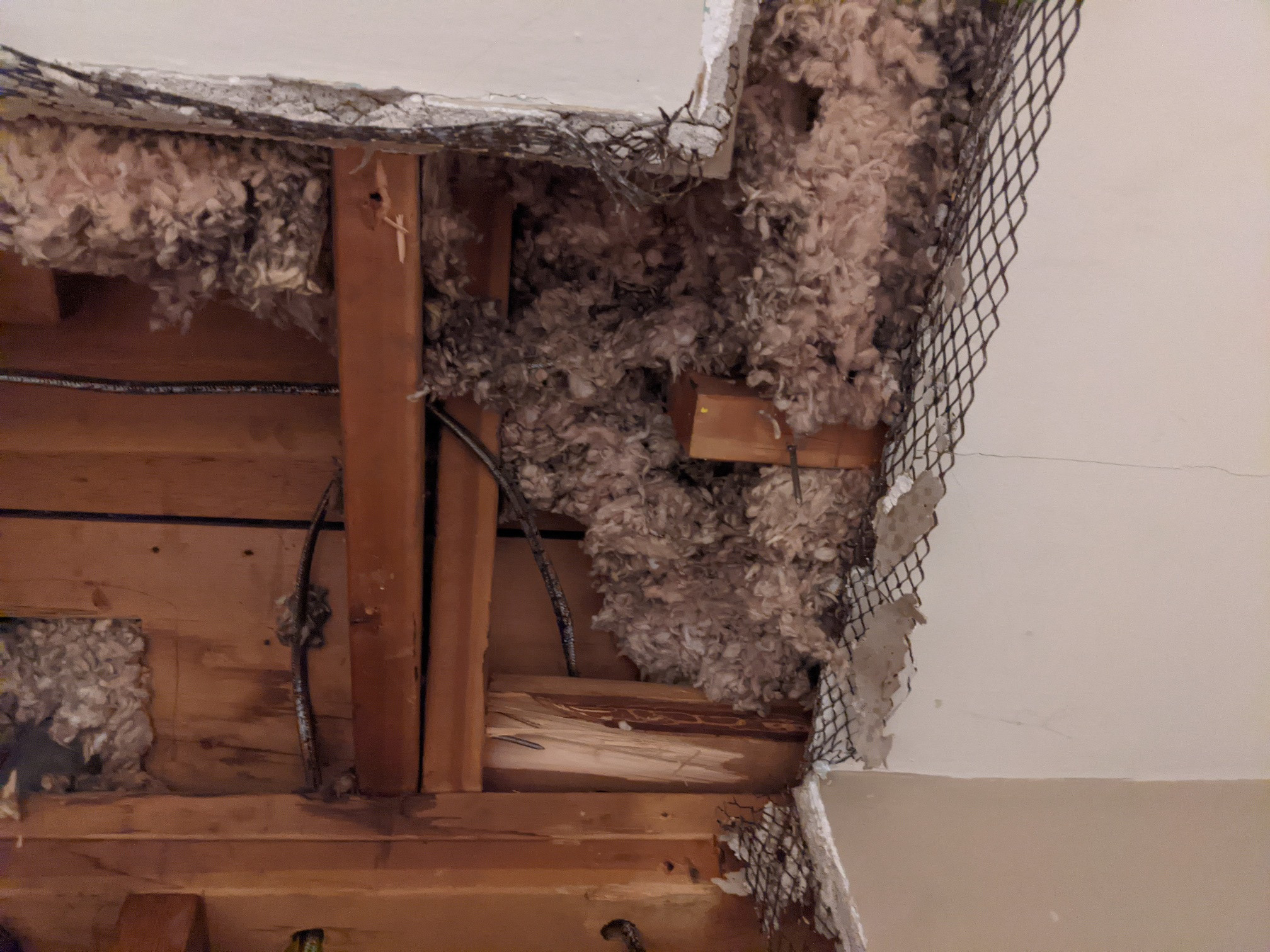 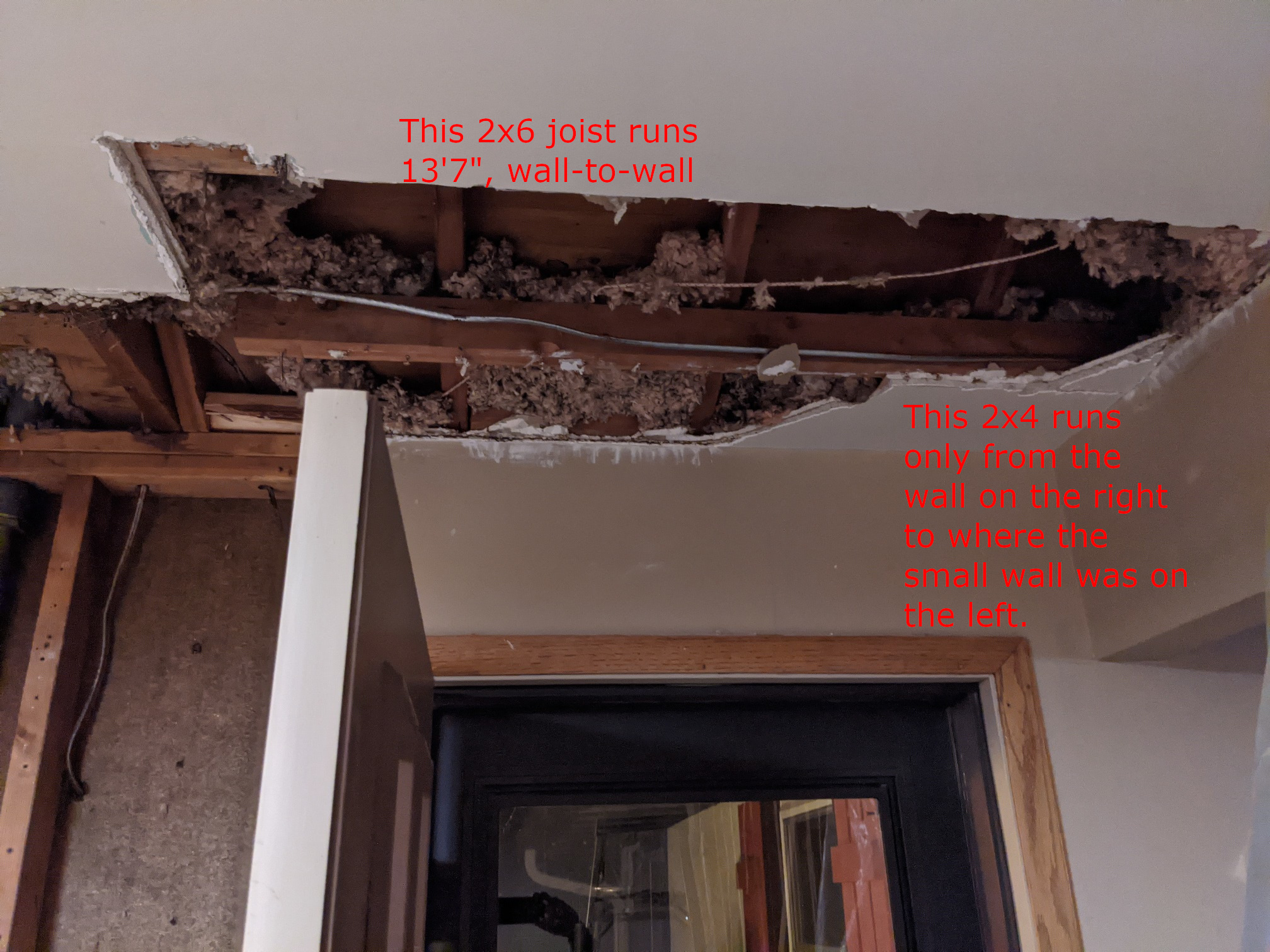 Update: For now, I'm using a stud from the wall I removed to replace this 2x4 joist and hang it to the 2x4 soffit support with a joist hanger, then using joist hangers to continue it through where the soffit was for drywall support.

Second Update: I removed the "floating" joist, it was held in on either end by only 1 toenail each, with a small 2x2 block to keep it in place while toenailing on the full wall, and came out very easily. I'm convinced at this point it was just there to hold up the rock lath, as it had no lateral or upwards hold, just enough tack to keep it from "walking".

Evidently you took out a wall that was used as a bearing wall for the ceiling joists that are turned perpendicular and are not connected to the intersected joist. The few that are tied to the intersecting ones are there just to control the sag of the last one so it does not put a dip in the ceiling right where the wall is that you took out. It was all supported by the missing wall.

It was never intended to be an open space at anytime as you are trying to do. Since the span is 14+' on the joists that are now unsupported, it will need to be redone with a flush beam set in the ceiling and configured by an engineer who needs to know all the particulars about attic space, snow loads, span details and ceiling joist sizes and spacing, some of which you provided, sorta.

The way the ceiling is typically framed for an open ceiling as you desire, is the predominate run of joists are run all the way to the end wall, perhaps as close as the roof rafters allow on the perpendicular roof, sometimes as much as 4' away, not the 14+' you have, which is where some of the problem lies. Then the last joist is doubled to act as a beam to hold the ends of the what would now be very short rafters going the other way. Doubling the beam is a typical detail, it may need to be tripled, depending on the overhang conditions. Hence the engineer. Besides, this is always laid out on the building plans at the time of construction, and designed or approved by an engineer before construction begins

2
How can I build a temporary support for rafters?
0
Can I install 1x6 T&G boards over 1/2" drywall on 2x6x14' ceiling joists
3
Can I remove ceiling joists without risking the integrity of my roof system?
1
Can I drill a bathroom vent through what appears to be an exterior joist?
0
Adding ceiling joists to workshop shed
1
How to install a door in a load bearing basement wall that is only 80 inches high
0
What is the purpose of these roof joists/braces in old house can they be removed
1
Joist not sitting on brick wall
6
How should I repair this floor joist that is too short?