Can you extend electrical wires from a junction box as long as the splices are contained?

I have an electrical box that ideally I would get moved, but I'm trying to work with what I've got. From what I can tell, it has already been moved/replaced twice before, as there is a round patched area as well as a metal cover plate near the current box (where there is a light fixture).

I have searched extensively on the internet about possible fixes for this with regards to how to get a chandelier placed where I want it. Swagging is the obvious solution (which is not my favorite look), but I also read that getting a fixture with a large rectangular canopy could work. Problem is, my junction box is off in two dimensions, and also the mounting brackets for linear chandeliers seem to always have a centered hole where the wires from the box will be spliced with those from the fixture.

So, out of curiosity, if the main concern is that splices be contained yet accessible (according to code), would it be possible to splice a long set of extensions at the point of the box, contain it with one canopy (a small circular one), then run those extensions to the linear chandelier, splice them and contain the wire nuts using the mounting bracket, then swag the whole thing?

I have serious doubts about this possible 'solution' so I'm not going to do it, but I was curious if it would fly. In my mind one obvious issue would be covering the wires and making sure they aren't the main source of support for the light (running a cable or chain), but I neglected to include that in my sketch below. Thanks in advance! 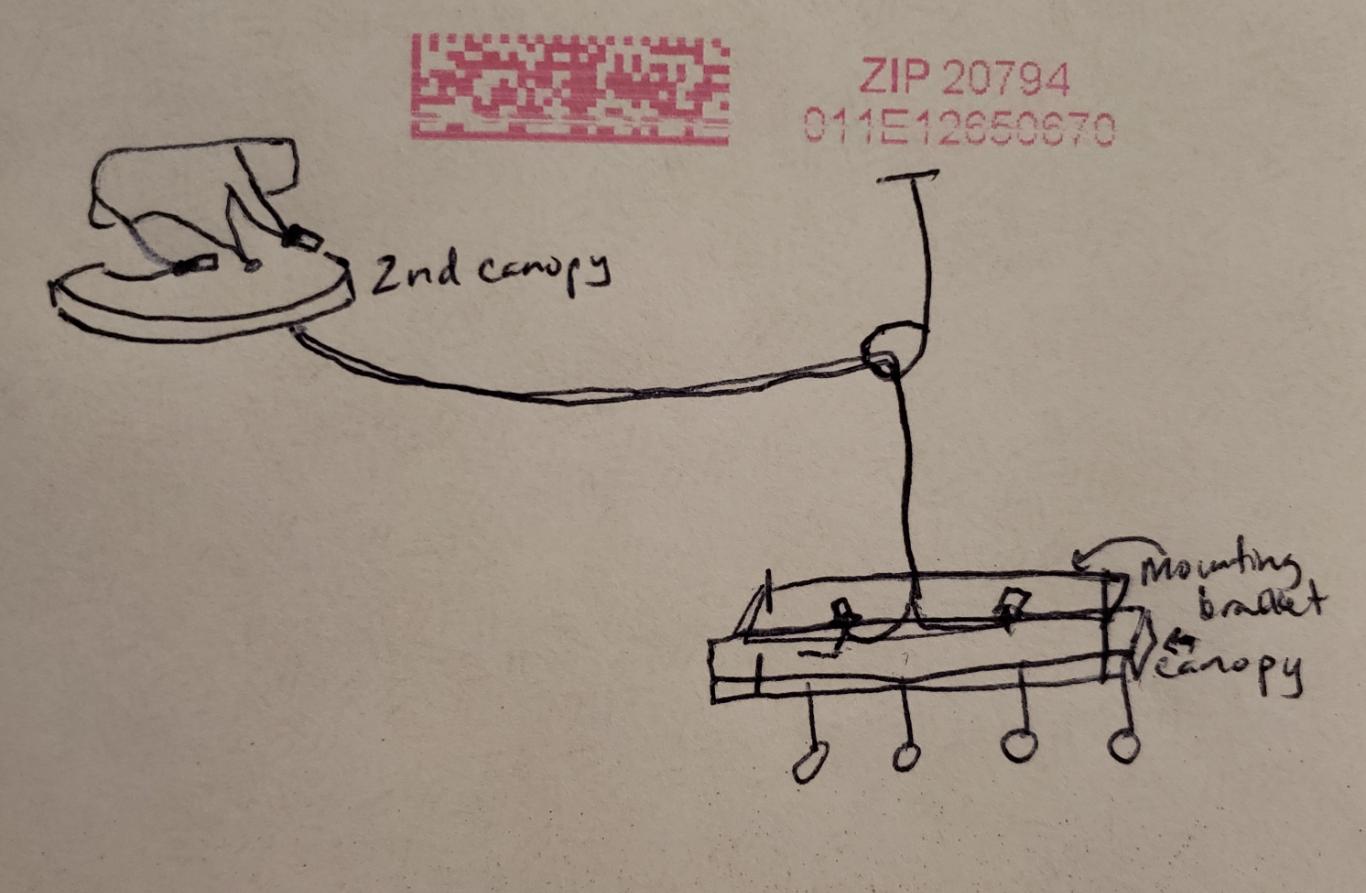 EDIT: As an alternative, could one drill holes in the two canopies so that the wire could be run across the ceiling, hidden with a raceway/cord cover, and then mount the mounting bracket straight to the ceiling? That way The light would get sufficient support. Sketch below:

I would use a surface raceway setup for this

This sort of job (extending power along a wall or ceiling) is precisely what surface raceway (such as Wiremold™) is made for. In Wiremold 500/700 series (Legrand's baseline metallic product), you'd be using a V5737 box with a blank cover (a standard 4" round junction box cover painted to match the raceway/ceiling will work, or you can order in a V5736 cover if you don't want to do any painting) as your starter, then appropriate lengths of raceway (including what sounds like a flat elbow) to connect the starting point to a V5738AF fan box, which you can then hang your chandelier from. Within this raceway, you then run THHN wires (black/white/green 12AWG stranded serves as a "universal donor" here) from the existing box connections to power the new fixture.

1
Need a way to rotate a chandelier *without* rotating its mounting point
2
Light Fixture Trips Breaker
2
Ceiling junction box has 6 wires?
0
Code requirements for adhering wall light to electrical box - does the light need to be attached to the box?
0
Problem encountered with installing an exterior light
3
My circular old work electrical box is too small for the light fixture mounting bracket
3
Hanging chandelier with wire support
1
What box/adapter to mount this light sconce?