This is a followup on a question I asked awhile back about temporarily disabling the auto-defrost circuit on my KitchenAid KRFC300ESS fridge: modify fridge to temporarily defeat auto-defrost?

I believe the solution is to add a method to temporarily break the connection to the defrost heater. I'll use an NC (normally-closed) relay, so that I can bring a low-voltage wire pair to the front of the unit, where I'd put a "disable" switch (I believe the defrost heater operates off line voltage). I want to put the relay in the machine compartment at the rear of the fridge, on the relevant wire that goes to a connector into the cabinet itself (where the defrost heater is located near the evaporator coils).

But I'm loathe to do this without first understanding the circuit. Here is the relevant part of the schematic, showing the defrost circuit near the bottom and some surrounding context:

I believe interrupting the WH/BK wire is a non-starter, because it's connected to a number of other components (perhaps it's a neutral). So that leaves me with the OR and BR wires, both of which appear to have the ability to energize the defrost heater ("DEF HTR"). I suppose I could use a DPST-NC relay and interrupt both, but I'd really like to understand what they do. The BR wire comes from a connector terminal labeled "STAT" - does that mean thermostat ? Except I thought auto-defrost circuits were usually based on timers, counting of door openings and such. If anything is a thermostat, it would appear to be the thing labeled "DEF TERM" ("defrost terminator"); and why does it have that resistor bypassing the switch, is it to leave a trickle current in DEF HTR when it's off, maybe so the heater itself doesn't frost up ? The OR wire goes to a connector terminal labeled "D-SENS" and I have no idea what that means.

To add further confusion, here is a portion of a companion drawing labeled "Wiring Diagram": 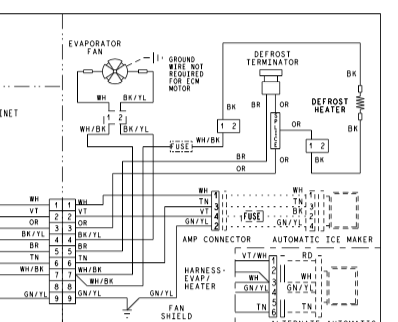 Note that in this drawing, the OR and BR wires appear to be going to pins 3 and 5 on a single 9-pin connector, whereas on the schematic they appear to go to two different connectors. You'd think the actual physical connectors are more likely to be in "Wiring Diagram" than "Schematic", but who knows ? I suppose I'll sort that out when I open up the back and locate these wires.

For completeness, here is the entire page from the "tech sheet" from which I lifted the above images. 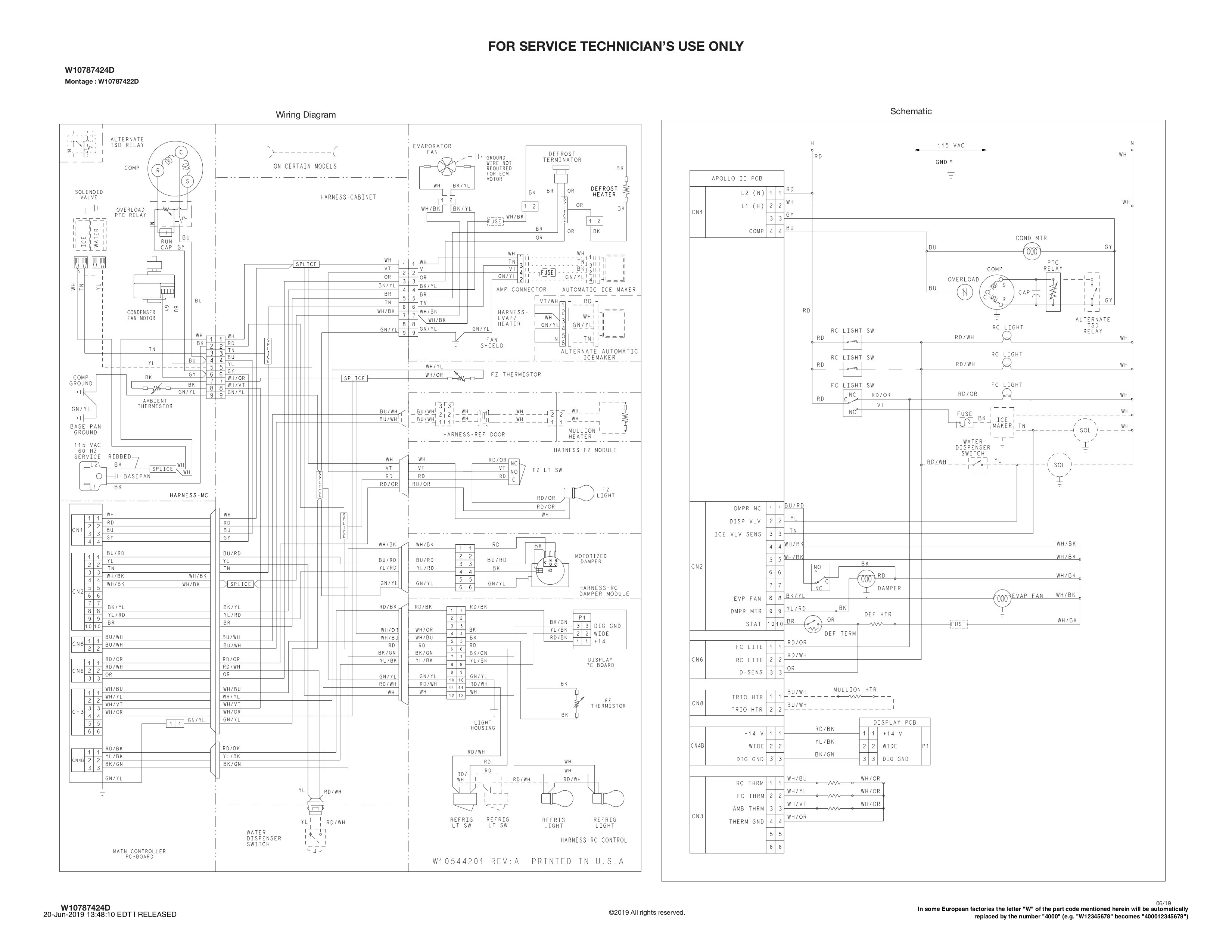 It seems "DEF TERM" might mean "defrost terminator." If you can locate this component it may shed some light on what it does -- I wonder if it might be an auto-resetting thermal switch. It seems that a well-placed switch would experience temperature of 32F (or lower) until the moment when the ice surrounding it has turned to water, and then the temperature of the switch would rise. A control could use that behavior to terminate the defrost cycle at the right moment. A time-based defrost would run the risk of being inadequate by letting ice remain or inefficient by heating the freezer compartment excessively.

"D-SENS" might be an abbreviation for "defrost sense." If the guess about the terminator is correct, this sense line would provide a way for the controller to detect that the defrost terminator had activated. That could have been done by sensing the current flowing through the defrost heater, but maybe in their circuit design they decided a voltage-based sense was better than a current-based sense.

Not the answer you're looking for? Browse other questions tagged refrigerator appliances or ask your own question.

2
How should I troubleshoot a refrigerator that is not cooling?
1
Understanding fridge wiring diagram
3
Freezer too warm - thermostat or leak?
0
Fridge and freezer on 15amp circuit break via 14-2 wiring
0
Refrigerator is warm but freezer stays cool
0
modify fridge to temporarily defeat auto-defrost?
1
Kenmore 51789 Fridge - Trying to Troubleshoot Defrost Problem