I had a bathroom sink added to opposite side of kitchen where there's a sink/dishwasher. I think contractor hired a plumber who is unlicensed. He insists the guy is licensed but I've had too many problems so far to believe that this guy is trained right.

First we had copper line leak that the plumber put in and now there's no pressure in kitchen sink. the contractor insists the guy didn't share the hot/cold water line but i am seeing it for myself and the plumber tapped into the cold/hot water on the kitchen wall - tapping into it with T-copper line to add a bathroom sink on the other side.

Is this why i have no pressure on my kitchen sink now? Is that even to code to add a sink in bathroom with same hot/cold water lines?

Note: photo shown is on new bathroom side where sink will go (other side of wall is current kitchen sink/dishwasher) 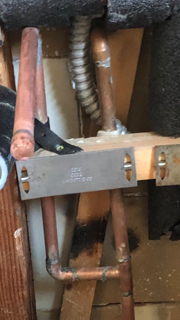 The most common reason this happens is not anything to do with the plumbing work done, but rather when old shutoff valves are closed and reopened the rubber washers crumble and clog the screens in the faucets. Have your contractor take apart the kitchen faucet and check the screens for debris. There is usually ones under the sink before the cartridge depending on the design

Sharing the line would only cause an issue when both fixtures are operating at the same time. Sharing the lines isn't ideal, but it shouldn't cause the problem you're describing. I will say that if it were my house, I would insist on the new sink's supply lines coming off of a 3/4 inch pipe somewhere, rather than just tapping into the kitchen sink's 1/2 supply lines.

I recently had to turn the water off to my house and drain the pipes to do some plumbing work elsewhere in the house, and when I turned the water back on the laundry sink had very little water pressure regardless of if I turned on hot, cold, or both. The washing machine next to it was fine. I had to clean some mineral-ish gunk out of the laundry sink's faucet and then it was fine. I've heard that shutting the water off or on quickly can commonly cause issues like this in lines that have been around for a bit.

As for the contractor's plumber, I would say you should tell your contractor to provide you with the plumber's license number and then confirm it with the state or whoever issues licenses where you live. I'd also tell the contractor to have the plumber come out and do whatever they need to do to restore the water pressure to your sink. If they are a licensed plumber, they will be able to do that. In most places in the US, using an unlicensed plumber is not allowed; a homeowner can perform the work themselves, but someone other than the homeowner needs to be licensed. Many jurisdictions would also require a permit in order to add a sink where a sink does not already exist. I understand many homeowners are not a fan of pulling permits, but in this case it may give you leverage to get your work done right. If your contractor wants to give you the runaround and is using an unlicensed plumber/isn't performing the work legally, you can probably file a complaint with some combination of your state's attorney general, your state's licensing authority that issues plumbing licenses, or the Better Business Bureau, or take some kind of legal action against the contractor. Hopefully you did not pay upfront either. If you hold the contractor to doing the work right, and you've already asked for a license number from the plumber, they will probably not put up a big fight knowing how much trouble they could get in.

You would lose pressure if both the bathroom and kitchen were in use at the same time, otherwise that is not an issue.

Not the answer you're looking for? Browse other questions tagged plumbing water water-pressure remodeling or ask your own question.