Gluing two halves of a door together

Needed a door that matches that the doors from 1940s in my house. So I bought a 30" door on Craigslist and cut it down to 23" by cutting out the middle of the door as you can see in the pictures.

I'm faced with two decisions that I would like some expert opinions on:

What would you recommend? 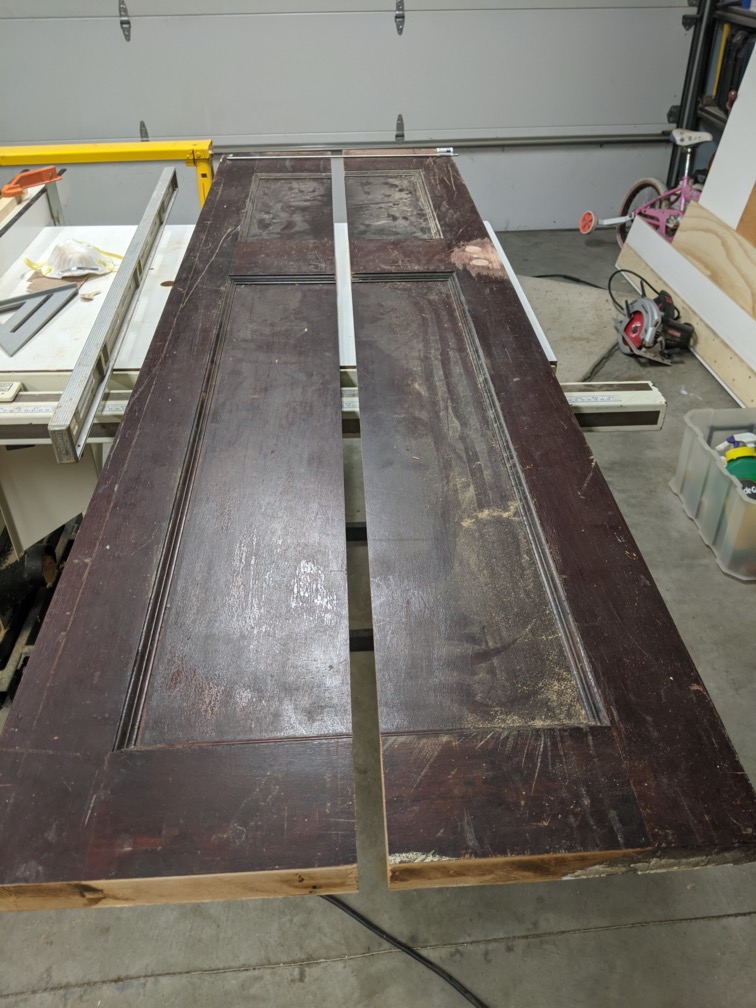 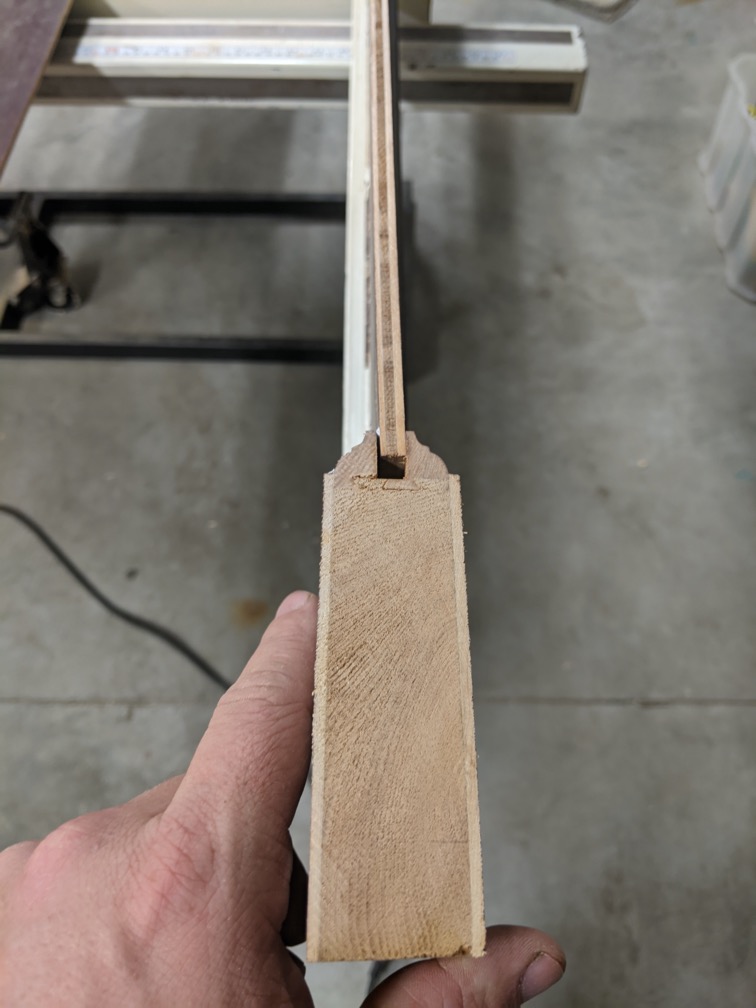 (I know, you've done a bunch of work, etc. They call it the sunk-cost fallacy for a reason. Strong butt joints in the rail are possible but hard and would involve a ton of wood filler afterwards.)

Get another door. Rough cut next to the hinge stile (but not cutting off the molding on the stile). Extract the panels and cut them to size -- no difficult joining. Clean off the dregs of the rails beside the stile. Cut your rails to an appropriate width and use whatever joinery seems best. (You'll probably need to do a bit of chisel work to flatten out the molding where the butt of the rail meets the stile.) I'd biscuit for alignment, then after glue-up is dry, sink 8-10" structural screws (2 or 3 per rail). 1/2" dowels would be good as well, as long as you were drilling the holes for them when the door was glued up and flat. Trying to drill two sides of the dowel separately is a recipe for frustration and alignment disaster.

Here's a series of pics that show what I'm talking about above. 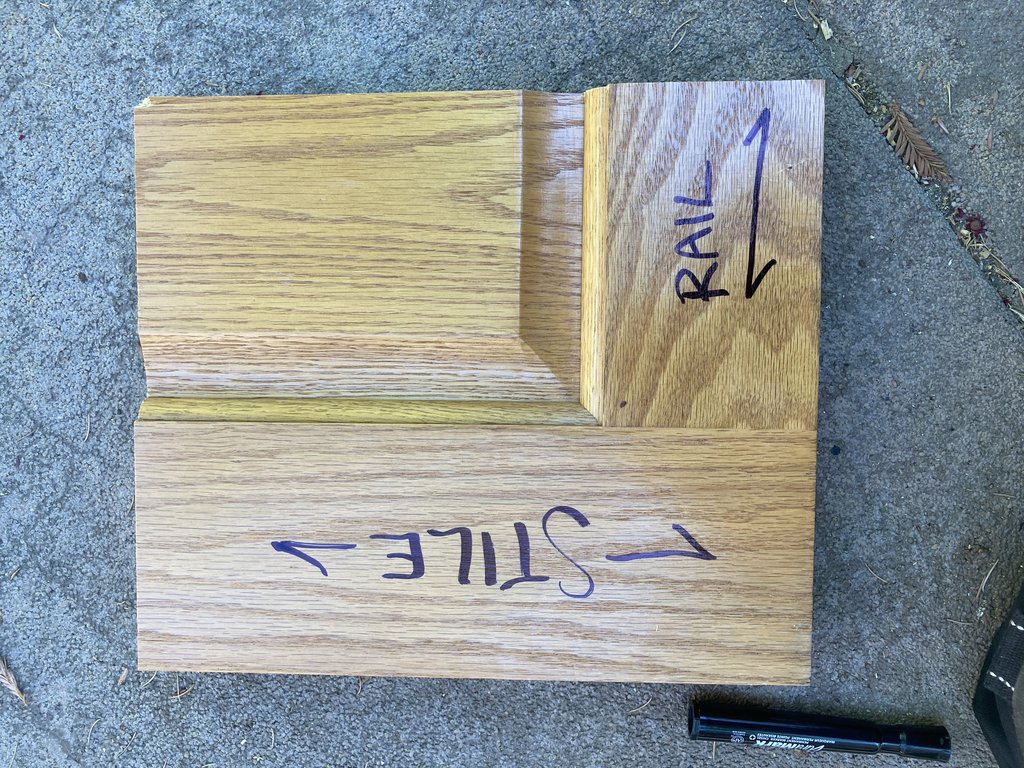 Starting point. Sorry about the rotation. 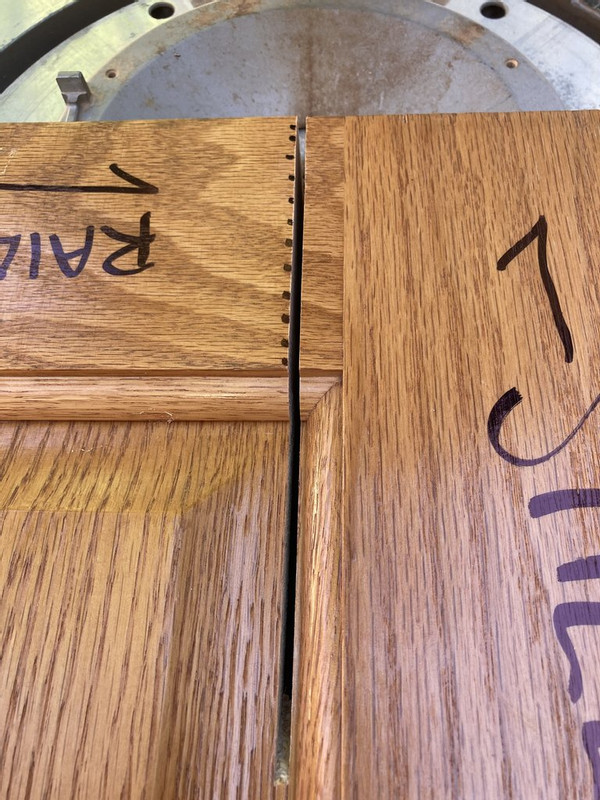 Rough cut the rail. Don't cut any of the molding on the stile. 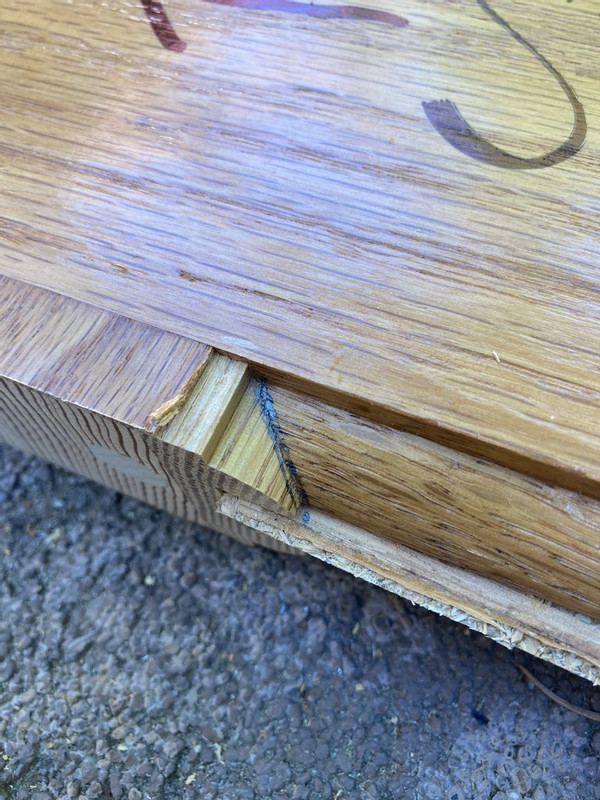 Mark where the rail copes over the molding on the stile. You'll cut that part of the stile later. 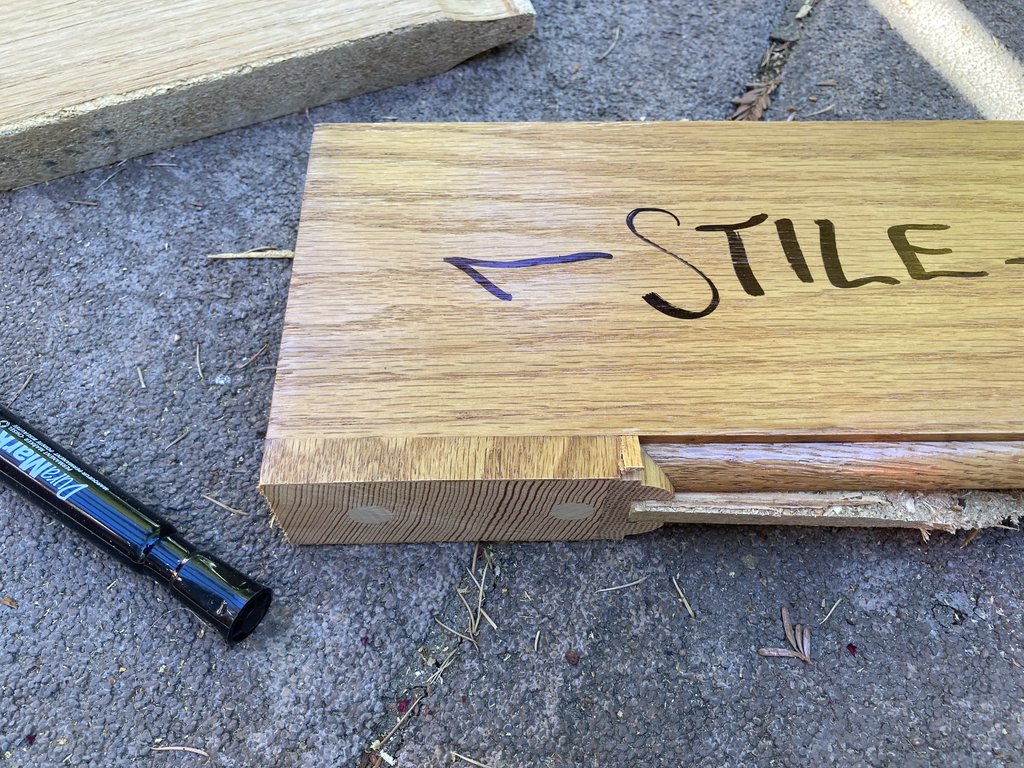 The molding on the stile runs all the way through under the coped rail. Somehow, chip/cut away the remaining rail. 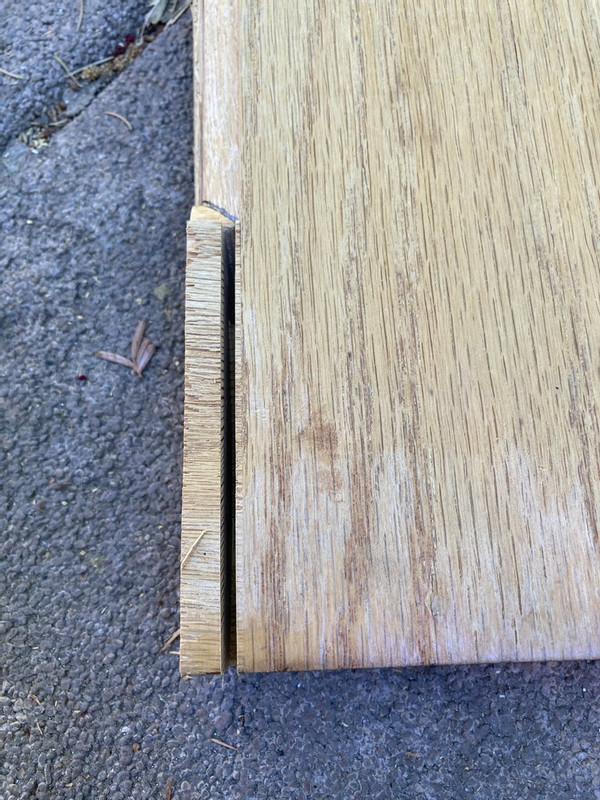 You can do part of it with a chopsaw (granted, awkward with an 82" stile and impossible for the midrail), but don't cut past your pencil line. You'll inevitably be left with some wood that the chopsaw won't touch, so chisel/ multitool/ whatever to clean that flat. 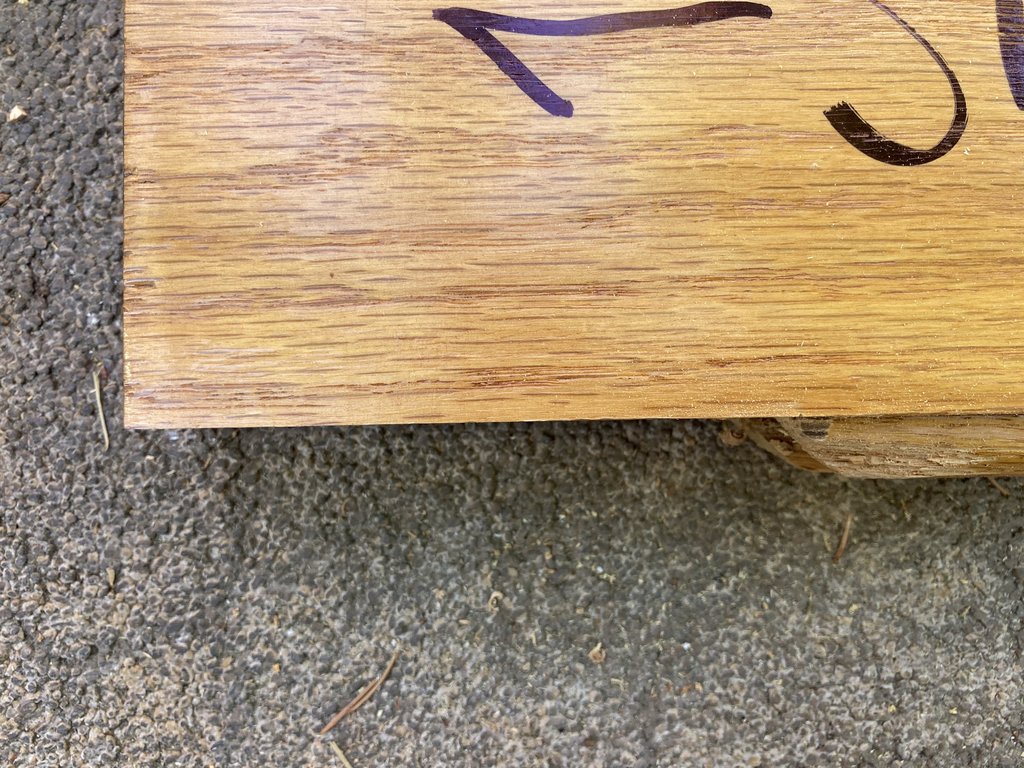 Cut the miter that you marked with the pencil earlier on the stile molding. (Don't do what I did and bust off some of the molding while demolishing the remainder of the rail.) 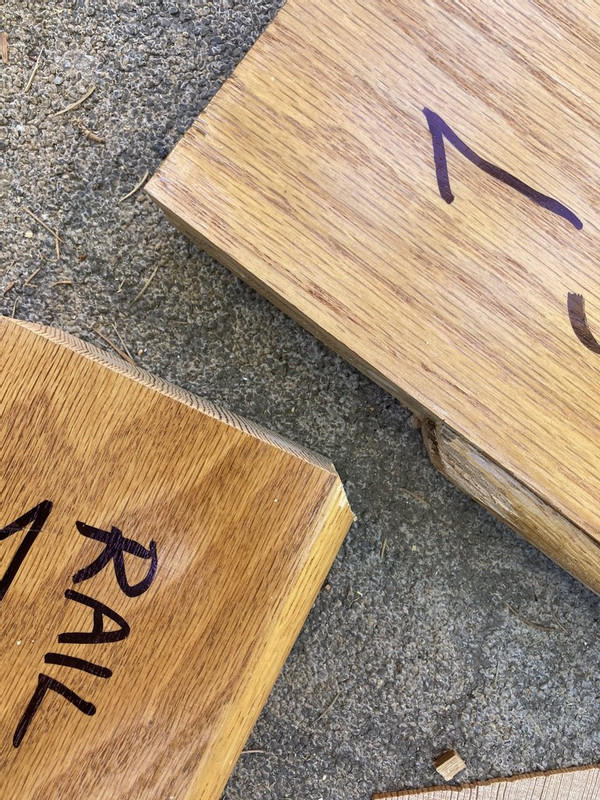 Cut the rail to width and miter the molding. 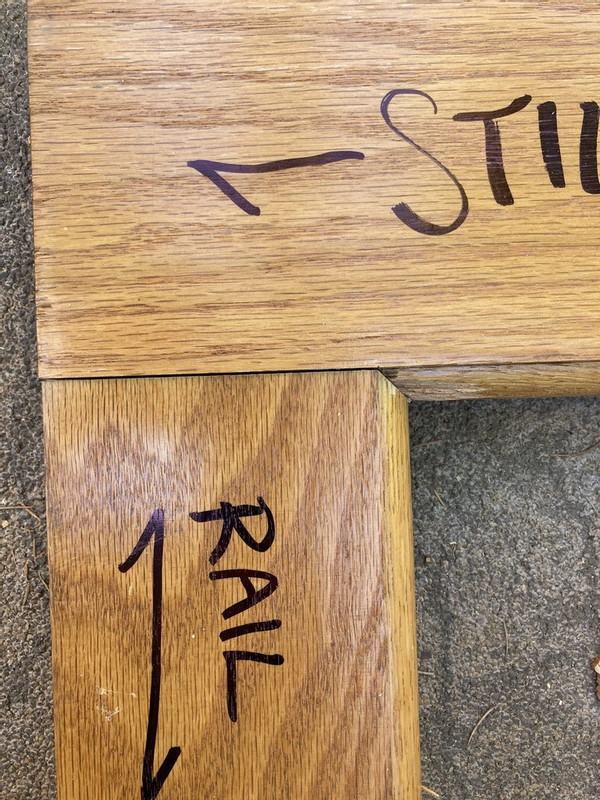 Your parts should go together perfectly. Join them as described above.

If not making new panels, make or purchase an H shaped moulding and set the panel halves into it.

By eyeball (but measuring tape may say otherwise) the top panel parts might be pulled out and rotated to provide similar "tie-in" as a new panel would, with that new H shaped moulding running horizontally, if the sizes work out.

Too late now, but had you removed the moldings on one (or preferably both) side(s) and taken the panels out before cutting, you could have cut the panels and moldings to fit the shrunken door, rather than cutting them in half. Likewise, you could have cut half-laps in the rails using the section you were removing for a more solid joint. Butt joints are not the best thing in the middle of a door.

I think your best bet NOW (other than another craigslist door and starting fresh) would be to route recesses for substantial patches ("dutchmen", except that your standard "dutchman" is cross grain) in the rails to tie the door halves together without relying on a butt-joint alone (with or without dowels/biscuits, you close the door a few times and it's going to want to fail - because end-grain glues terribly. Both of those techniques work well for gluing side/edge grain, NOT end-grain.)

If you are REALLY GOOD with a router, and have a quite substantial one, you might be able to make a "loose tenon" for a less visually obtrusive joint. You could also do dutchmen in the top and bottom rails into the top and bottom edges of the door, rather than the face.

Do you have enough panel material to do this? 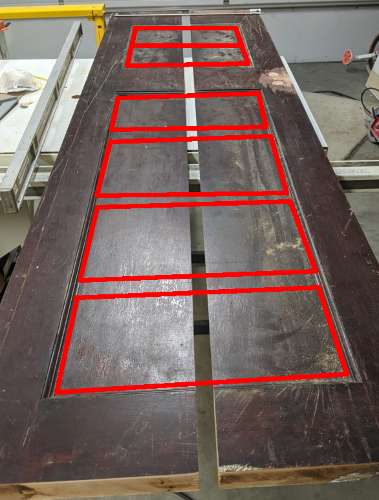 Biscuit jointing the framing is your bare minimum.

If you have enough material left over, replacing 3, 2, or even one of the horizontal members will help strengthen and stiffen the door.

Another option might be to make this a bifold door, but that would mean attaching two vertical "jambs" in the cut, and adding a big piano hinge and some toolbox-style latches on the other side.

Or you could consider fitting this as two doors in the doorway, with one on either side. Again it would need something in the cut to finish and support it.

It's possible. As a guitarist, I know that this is exactly how bookmatched guitar tops and backs are constructed. Typically that uses aliphatic resin for the gluing.

I also know the work involved in planing dead flat surfaces for that butt joint! This is going to be a long, painful exercise.

I'm with the others that you need to start again. You certainly can start again with the same type of door though.

IF you're going to paint it, then you might be able to join them with pocket screws and wood plugs

Biscuits and glue are going to be your best bet here. Biscuits will give you something to strengthen the joint. It means investing in a biscuit joiner, but you can buy these for a decent price (i.e. Harbor Freight, etc). The next thing is once you have the biscuits cut in and ready, you'll wood glue the entire cut and then clamp it for a day or so.

How well this performs as a door remains to be seen, but there's not another option that can even offer you the hope of a reconnected door.

If you biscuit anything together, or dowel, etc., do take the effort to not set them "perfectly in line"... Remember that the people who hammer their window board-ups every which way see them last vs. the monsters. People who drove their nails per perfectly straight in instead of up/down, left/right pointing see the monsters come up, push straight into the room and pop the boards out.

Set the biscuits, dowels, etc. at angles to each other at least so project their strength in a more 3-D fashion instead of dead center, running up/down, looking all organized and pretty.

Close (opposed) pairing won't hurt either. No need to be economical here. Time is free, and if you have time to ask this, you have time for a few extra biscuits. Dowels and biscuits mixed, even better. If you don't, someone's gonna bump against it the first week it's up and C-R-A-C-K... like rain after washing the car. Do it, and it'll be 20 years before some stumbles against it.

Also, for strength, it's only 23" so if you have the long drill bits, or extenders, two dowels the width of the door in all three solid pieces of wood would be very strong. Doesn't help with the panels lining up, but the door would be pretty strong. Steel dowels would be even better. (And offset, one of each pair angled up a wee bit, one angled down a wee bit, or at least changing as one moved from top to middle to bottom. Monsters... you need every advantage!)

Starting over with another door might be best in the long run, but if you're set on using the existing door, here's how I'd do it:

Biscuits are not going to offer enough strength to the butt joints in the rails. They would be useful only for alignment purposes here, and I don't think that's going to be your biggest problem.

I would use 6-8" pieces of All-Thread as dowels and set them in place with epoxy. Using All-Thread takes advantage of the additional surface area that the threads offer to make for a stronger joint. I'd try three in the top and bottom rails and 2-3 in the middle rail. The important thing is to get the holes located as precisely as possible and drilled as straight as possible.

Here are some resources for locating dowel holes effectively:

You can pick up or make a jig for aligning the holes or just measure and drill carefully.

I would also replace the panels with new ones which will improve the strength of the door overall and avoid the problems associated with matching up the edges of the plywood panels.

Not the answer you're looking for? Browse other questions tagged doors woodworking adhesive carpentry or ask your own question.

3
How can I clamp two 325 mm planks while gluing them together?
4
Should I reinforce my lap-joint?
2
Gluing plastic to glass
2
Gluing small pieces of drywall
0
Gluing Table Aprons to Plywood Table Top
0
Mark location of holes with two boards fitted together
1
Gluing fusama paper
0
Gluing two pieces of glass together - type of glue, techniques