I've recently moved into a new home with a few outbuildings. Due to the property being in rural unincorporated area, no inspections or permitting was required on the outbuildings when they were built last year.

To mitigate the risk my insurance company paid for and completed a comprehensive electrical inspection to check for fire risks. The inspection report listed a deficiency with all of the outlets in my largest outbuilding. It was not deemed a fire risk, so I don't need to immediately fix the situation, but I am wondering how important it is to get fixed (For safety reasons).

The report listed the deficiency as: "Possible MWBC without pig-tailed neutrals in all outlets within building 4"

I've pulled apart one of the outlets as seen below: 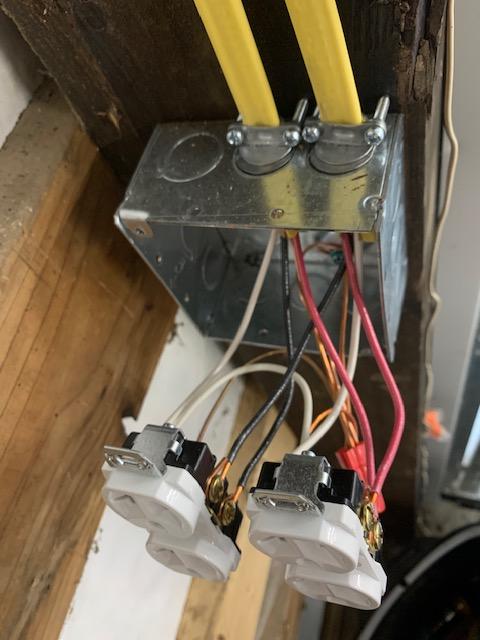 I have a total of 60 outlets (30 boxes with 2 outlets each) wired this way, so I'd rather not change if not necessary.

The 3 matching breakers for these outlets are These 2 pole GFCI breakers, additionally if I measure between the red and black at each outlet box, I get 248 volts, so I assume I do have multi-wire branch circuits in use here.

For what it is worth, the building should have been built to NEC 2018. The lack of conduit will be addressed.

The prohibition exists for MWBCs because opening the neutral causes major trouble on those circuits. When the neutral is opened on a MWBC, the voltage at the outlets destabilizes - on a 120V MWBC, you could see anything from 0V to 240V*, causing all kinds of problems. So if someone removes a device and unwittingly caps the neutral, leaving it open, you can wind up with a very bad situation.

Obviously if you wind up with 240V applied to appliances and etc. intended for 120V, they may by destroyed immediately, especially sensitive electronics, and think how many things around the house have sensitive electronics. Motors may run way too hard for a short while, then fry.

A device like a space heater, a purely resistive load, may not be destroyed or damaged, but will pull up to double the usual current, overloading the circuit. Hopefully the breaker is functioning correctly and it will trip quickly before anything is damaged. But if anything is wrong with that breaker, it could fail to trip and cut power, and the resulting overload can damage wiring and connections, and is a major fire risk.

I wouldn't let this go for long. The risk is just that someone working on the wiring removes a receptacle and unintentionally leaves the neutral open. So until it is corrected, I would not allow any other work be done on the wiring.

If everything is nice and neat and roomy like the box in your photo, it's likely a day's work with very little materials required. Open the box, use the one pigtail that's already there, add a pigtail to the other receptacle, nut the four together, close the box, lather, repeat.

*With the neutral open, a shared neutral circuit degenerates into a 240V parallel - series circuit, such that the loads (in parallel) on L1 are collectively in series with the loads (also in parallel) on L2. The voltage on the L1 side and the L2 side will depend on the load on each side. If there are no loads on L2, the L1 side will see 240V. If the loads on the L1 and L2 side are the same, the voltages will be the usual 120V on both the L1 and L2 side - until something is turned off.

No, you really need to fix that. Search this site for "Lost Neutral" for what happens when the neutral wire has a problem. It's bad, and it can set stuff on fire.

Look at that neutral in your photo. Simply to transit this box, current must go through four splices. Two on each receptacle - supply, jumper, jumper and onward. That's 4 places for things to go wrong. If you pigtail it as Code requires, you're now down to 1 - and 1 that is unlikely to fail if done competently. You're not even hoping the guy at the receptacle factory wasn't even having a bad day - not much to go wrong on a properly tightened wirenut.

I can't even call this work sloth, because 4 shepherd's hooks is a lot more work than pigtails. That's why I pigtail stuff I don't even have to.

The above is not the (only) reason Code requires pigtailing. It's for a different reason too, but that will seem irrelevant.

If the receps are in an uncomfortable location to work at, then just remove the 6 wires and sever the ground, and drag receps and domed cover back to the workbench. Put pigtails on the receps and mount them back into the domed cover. Then go back to the site, trim the 6 wires to length for a red wire-nut, then nut 'em up to the receptacle wires. That way you're spending minimum time in the stress position/crouching/up ladder etc.

Note that if the ground wires are properly attached to the metal box, and the receps mount to the domed cover with 2 screws each (not only the center screw), then that metal-metal contact is the valid grounding path and you don't need ground wires too.

The problem is not a fire it is a shock hazard. As far as if it is important, it has been code for decades. The issue comes when the neutral may get separated then everything down from there won’t work, but there are still 2 hot legs with GFCI protection. The risk is low but it should be updated. A wirenut and pigtails to the receptacles really won’t take long and is code compliant.

40
Is the Electrician trying to scam me?
6
Why are tandem breakers on shared neutral (MWBC) problematic?
0
MWBC for Fridge and Microwave
1
Overloaded circuit on ungrounded outlets
2
Can I serve mwbc 110v from 220v circuit?
3
MWBC and very low power factors
4
MWBC exists, use for bathroom?
0
3 phase MWBC - 2 pole breaker with shared neutral
0
Changing Tandem Breakers with Potential Unmarked MWBC