Outside GFCI trips itself and the two downstream as normal. Bathroom GFCI in middle trips plain outlet, but not itself. Between the two GFCIs, there is an unused solid cover outlet box in bathroom above sink, about a foot away from the two bathroom outlets. Inside it a 14-gage (15amp) Romex enters (from outside GFCI), a 12-gage (20amp) romex exits, and their wires are connected correctly by colors. Then the 12-gage line continues to the 20amp bathroom GFCI, then plain wires connect the 20amp GFCI to the 15amp plain outlet. 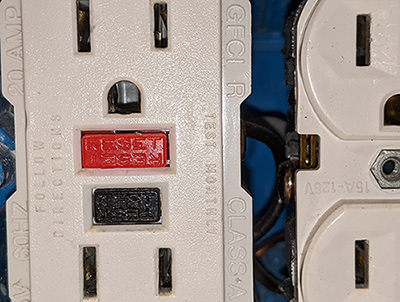 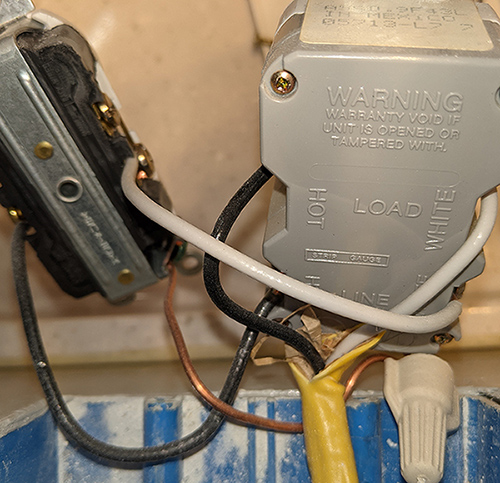 The symptom of a GFCI that shuts off power to downstream outlets but not itself when tested is a classic indication of a classic mistake. In particular, GFCIs are not symmetrical devices, unlike regular receptacles. LINE on a GFCI is the power in side, and LOAD is a dedicated output, connected in parallel with the receptacles on the front. If you try to put power into LOAD on older (pre-self-test) GFCIs, that power source will power the receptacles directly, bypassing the actual switching mechanism in the GFCI. Then, when you try to run further loads from what are actually the LINE side terminals, those loads are now on the opposite side of the GFCI's contacts from power, so they appear to be protected when you push TEST.

However, this miswiring condition's bad for GFCI's in the long run (tends to fry internal parts), so your bathroom GFCI should be considered due for replacement now. When you get the new GFCI in, there will be a yellow "FOR WIZARDS ONLY" sticker covering the LOAD terminals. Do not remove that sticker yet! Instead, what you want to do is leave that sticker on while wiring the GFCI LINE terminals to power and testing the results using the GFCI's TEST button and a plug-in tester. Once you know the GFCI itself is correctly fitted, THEN you can unfasten it from the wall, remove the "FOR WIZARDS ONLY" sticker, and hook your additional receptacle to the LOAD side of the GFCI.

15A/20A doesn't matter here, but your mix of bathroom and outdoor outlets does

The good news for the rest of your situation is that 15A and 20A receptacles, whether regular or GFCI, are only distinguished by their faces. UL and the NEC require both varieties to be able to handle 20A in a pass through configuration (from one set of screws to the other), so your concerns are irrelevant in that regard. Furthermore, it's A-OK to have fat wire on a small breaker, since the breaker's still the "weak link", so to speak.

3
what could cause my gfci to randomly trip?
1
20 Amp Circuit with 15 Amp outlets
0
Limits to load connections for AFCI/GFCI Outlet
4
Can you have both 15 and 20 Amp receptacles off the same 20 Amp GFCI?
1
replace regular breaker with dual function AFCI/GFCI
1
GFCI tester is tripping 15A breaker in panel; outlets on circuit do not appear to be GFCI outlets - is this a problem?
0
Is this how I add GFCI and Regular Outlet to existing Multi Wire Branch Circuit, 20amp? 12/3 to 12/2 wiring with GFCI
3
Fridge tripping GFCI Outlet