Is it code compliant to run only a hot wire to a relay used as a 3-way switch?

I am setting up a relay to control my 120v/15a pool light. The relay control will be located in a plastic project box near the pool equipment and will be driven by a 24VAC coil. The light circuit will be a dedicated breaker in the nearby sub-panel. (I'm using 24VAC as it is already available in the project box to drive pool valve actuators).

I would like the relay to tie into a normal 3-way switch mounted outside which would serve as a "manual override" in the event someone needs to turn the light on or off and doesn't have access to the automation control that drives the relay.

Normally, I would wire this by running THWN hot/neutral/ground through conduit from the sub-panel to the project box relay, connect the relay NO/NC contacts to two travelers and run those two plus the neutral/ground wires through conduit to the manual switch, then on to the light itself. However, I'd like to reuse an existing switch already mounted adjacent to the sub-panel (it's not a 3-way, but I will replace it with one). 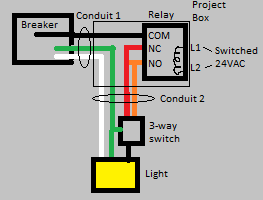 As a simpler alternative, can I safely to run a single THWN hot wire from the sub-panel breaker through conduit to the project box into the relay's common contact, and two THWN wires (travelers) from the relay's NO/NC contacts back through the same conduit (3 wires total) into the sub-panel. From there, the two travelers, a neutral, and a ground in a separate conduit connecting to a physical 3-way switch, then the 3-way switch's single pole, neutral, and ground make their way to the pool light fixture. Is this code-compliant or safe? 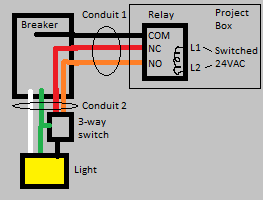 This feels very strange (wrong) to me and now that I've written out the question I'm fairly confident it isn't compliant and I should go with my first approach.

Your relay-on-a-switch-loop is fine in general...

Your relay-on-a-switch-loop turns out to be up to Code after all -- NEC 300.3(B) only requires the neutral ("grounded conductor") to be in the same conduit as the hots if it's necessary to route the neutral to a location to begin with (note that the wording about "grounded conductor" is prefaced with "where used" in the Code section in question), and in your case its not, as 404.2(C) point 1 is satisfied as long as there's enough spare space in the conduit to pull a neutral thru it later if need be.

But there are a couple of sticky points with your arrangement

However, your plans do have a couple of potential snags in them. First off, in your project box, you'll need to be very careful about line-voltage/low voltage separation if you want your control circuit to be Class 2 instead of Class 1. This will include using a relay capable of providing high/low voltage separation while switching a 15A tungsten or ballast load such as a RIBT24Z (you could use a RIBT24B, but that limits you to 10A of tungsten load), as well as having a barrier inside your project box between high voltage and low voltage wiring; in fact, I would screw a 4" square junction box to the side of your project box and use that to contain the mains wiring and mount the relay, thus keeping all that nasty mains wiring safely out of your low-voltage project box to begin with. Note also that you don't need the NC contacts of the relay here, so you only have to route two wires through your conduit, not three.

The other issue is that while your three-way switch setup will work for what you're doing, it's not often done due to the inability for a local operator to guarantee the load stays in a known state with the wiring you have. In general, what's normally done in this situation is called a HOA (Hand, Off, Auto) switch; while not generally available in familiar wallbox form, it's still possible to pull off. This is done by replacing the existing switch with a DPDT, center off, maintained contact switch such as a Leviton 1281, and use one side as "Hand" (with an always-hot feed) and the other side as "Auto" (fed from the relay-switched hot). You'll have to supply the labeling yourself, but this is probably the best solution for your application as it doesn't limit the load on the circuit any more than the relay does as well as fitting normally into a multi-gang junction box and faceplate. (A 20A circuit can use a Leviton 1284 instead.)

(The more typical "industrial" solution would be to use a 3-position selector switch; while a 22mm selector can be mounted into a junction/gang box using a faceplate with a 1/2" trade size knockout in it, such faceplates are not available in multigang configurations, and 22mm selector switches have pilot duty contacts on them, which means they're rated for much lighter loads than 15A of tungsten or ballast lighting. One could use a SIB02S from Functional Devices, but the form factor of that part isn't right for your application as it provides its own hub-mounted box.)

I need to post this as an answer, bc I don't have enough room in the comment response.

This is an interesting and creative project. But I don't think it will operate as you hope. What is the "automation control"? A timer? Motion sensor? Remote control? Magic wand?

I think, to accomplish most of what you want, would be install a switch in parallel with the relay. While that switch couldn't turn off the light, it could turn it on.

Lastly, please be careful here. These "one off" solutions can be a real headache for subsequent owners and service people. It's hard to make them code compliant without a lot of knowledge of code and separation of low-voltage and line voltage circuits.

Your plastic project box is not NEMA rated for handling AC power.

You also will have difficulty achieving hard separation inside that box between AC mains and low voltage, as ThreePhaseEel discusses.

Why run THHN in conduit, when you could run thermostat wire? Put the relay in the AC mains equipment and use the thermostat wire to carry 24V relay coil current to the relay.

I don't see any conceivable "neatness" achieved by keeping all low voltage together and porting AC mains into a gob of DC wiring nor into a project box not rated for AC mains. That just looks like a safety horror show to me.

A RiB and several similar products are UL-listed to provide correct separation between AC mains and low voltage.

When people get a little bit of experience with AC power, they often conclude it's not nearly as dangerous as everyone says. That is erroneous - it is quite dangerous. Just, most of the time, people get lucky.

That control scheme won't do what you want anyway.

Note that commodity 3-way switches do NOT have a center position.

What you're doing is basically a switch loop through your control panel and three way switch. I believe this will be a violation of 300.3(B).

If you were using a nonmetallic wiring method, then 300.3(B)(3) would allow for it; this is why switch loops in nonmetallic cable as normally done in residential construction are compliant.

Not the answer you're looking for? Browse other questions tagged electrical wiring code-compliance safety or ask your own question.

2
Home Light Automation - Emulate 4 way switch with relay
1
How should I mount relays in junction boxes?
1
Ceiling fan and light on separate three way switches, code compliant?
2
Three-way switch circuit between house and barn - how to wire
6
Why does my subpanel have 4 wires feeding into the lugs?
1
Wiring Pool Subpanel for Pump and Receptacles
6
Can the neutral and hot be split like this?
1
Code compliant way to hookup an electrical oven?
5
Ground wire pass-through safety switch to sub panel?
0
3 way switches / multiple buildings / no neutral or ground in conduit