Any reason *not* to put electric oven on GFCI breaker?

I want to tap my electric oven's existing circuit to add a NEMA 6-15 outlet in my kitchen for a 240v kettle (the oven is rated at 21 amps and the breaker is 40 amps, so I think I should be OK adding my 12amp kettle.)

My understanding is that since it is 240v, I'm not required to have GFCI protection on that outlet but since it is a) in a kitchen, b 24" from my sink c) I'm plugging a kettle full of water into it, I'd feel a lot safer, especially at that voltage, if it was on a GFCI. As far as I know, my only option at 240v is a GFCI breaker rather than at the receptacle.

So, is there any downside (other than cost) to just swapping the whole 40 amp breaker for a GFCI breaker and running my electric oven on a GFCI all the time?

EDIT: to clarify, here's what I'm picturing and my current breaker box. The first electrician I talked to already pointed out the oven's current breaker is mis-matched and should be replaced with GE breaker. He said he could do it, but said something like "you sure you want to run the stove [oven] on the GFI?" which made me wonder if there was some downside to that? 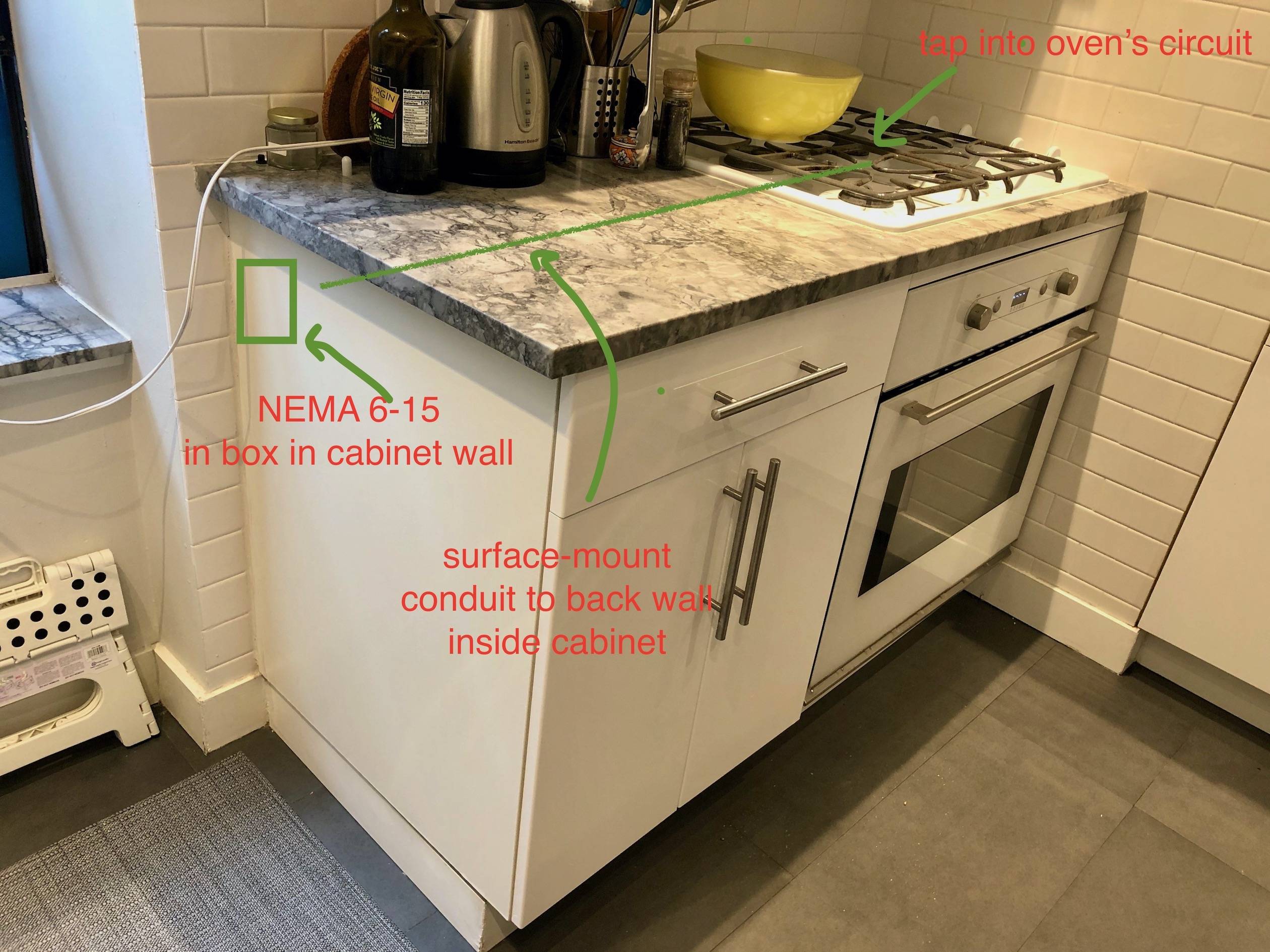 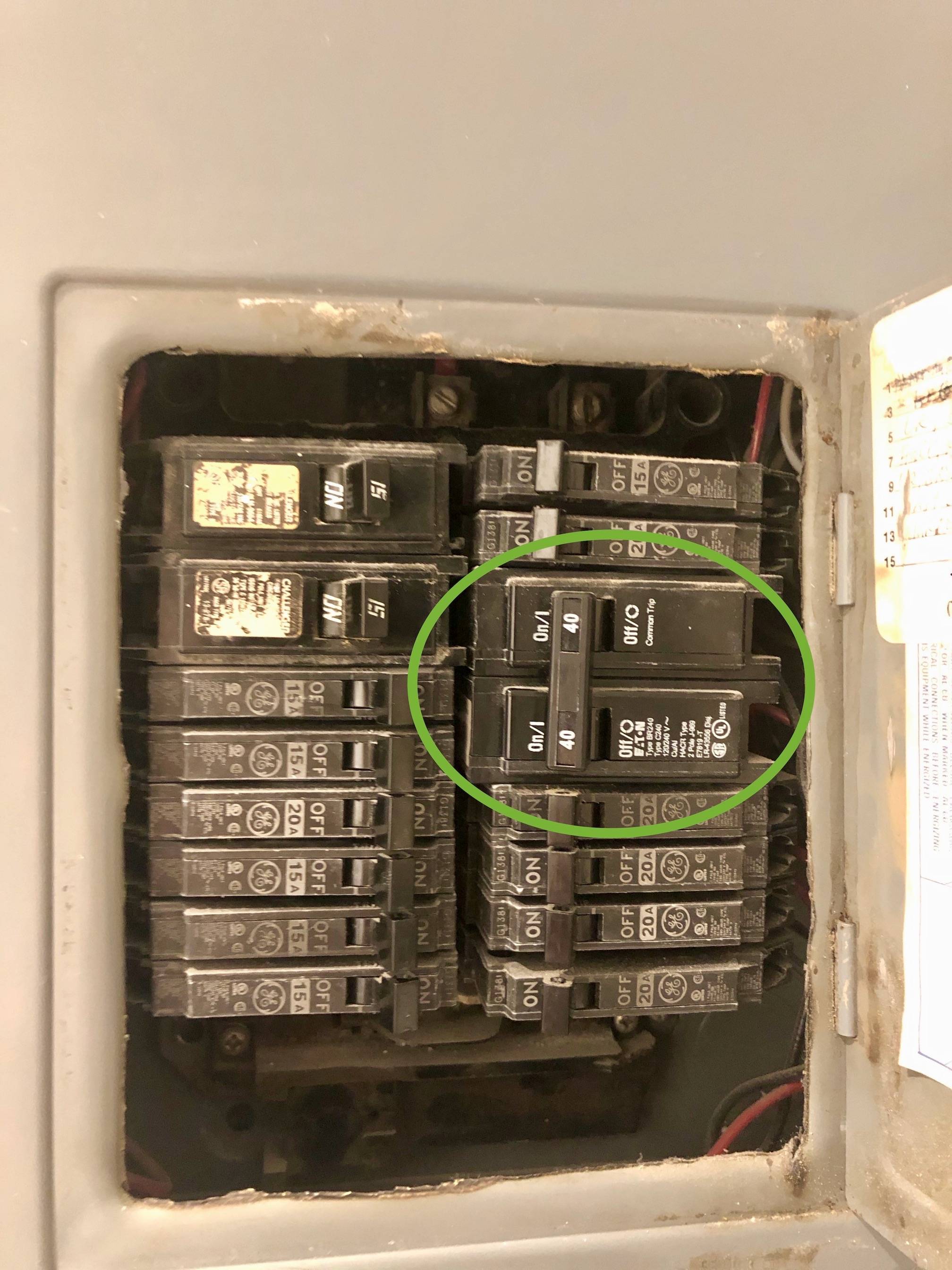 Any device in there would have, effectively, no circuit breaker protection at all. Because the 40A breaker would be so far above likely practical short-out currents that it would not notice if the appliance burst into flame. Rulewise:

Wait. Isn't the GFCI a circuit breaker too?

Nope. Actually the very opposite: 15A GFCIs are designed by the factory to safely allow 20 amps of passthrough - that's a UL requirement because 15A receps are allowed on 20A circuits. So in reality, the GFCI has no idea what current is coming through it (only current difference) and will carry an overload right up until the point it bursts into flame. GFCIs (and breakers for that matter) are not magic everything-fixers.

Your best bet is probably run a new kitchen circuit

One option is a multi-wire branch circuit. (MWBC). That is a cable with 2 hots and a shared neutral. I see at least 2 red wires in that panel, so it's possible you already have a kitchen MWBC, that would be neat because you could just convert it. But troublingly, it does not have handle-tied breakers. On a GE panel, even that is not enough; any MWBC must use a 2-pole breaker! (part of the reason for handle-ties is that forces the breakers onto opposite poles, an essential MWBC requirement; but that doesn't work in GE's half-width breaker design. Only a 2-pole breaker is keyed/notched to only fit where it belongs.)

With the MWBC, you can put both 120V and 240V sockets on it. One company even makes a combo 120/240V socket - one of each on a common-shaped duplex receptacle!

So if there isn't a kitchen MWBC, you could run one. That will give you both additional 120V outlets and also 240V outlet(s). This MWBC could replace your existing kitchen circuits if they are 20A breakered.

As far as GFCI, I don't see a sink nearby. Unless the latest Code requires it, you may be able to dodge the GFCI requirement. If you must go GFCI, it must be at the breaker. Definitely do the MWBC and definitely go 20A with multiple recep sockets, since you're sinking a lot of coin into that, so might as well get maximum bang for the buck.

That panel has serious issues

Somehow the panel's dead-front has disappeared. I don't understand how that's possible, but what should not be possible is for curious fingers to touch any of the panel guts... or for that matter, for an arcing fire inside the panel to get out of the panel through gaping holes in the front cover.

I would talk to a GE dealer about getting the correct dead-front for that panel. If that is not feasible, that panel is *grossly under-sized) for a house, so maybe it's time to replace it with a 40-space panel.

Not the answer you're looking for? Browse other questions tagged circuit-breaker gfci 240v or ask your own question.

0
I have 240V cable on a 120V circuit. Should I be worried?
2
Gas Dryer suddenly trips any GFCI Outlet immediately upon being plugged in, but works fine in non GFCI
2
Outlets not working, no GFCI issues, breaker problem?
1
New 220V outlet for expansion?
2
Is there is a Standard on how much main service panel / main circuit breaker amps should be?
1
Why would my GFCI breaker trip when I flip a switch?
1
Diagnosing RCD tripping to decide whether to fix or junk basic electric oven
1
How to compute breaker size for electric Stove + Oven?
1
What type of fuse should I use for my GFCI kitchen receptacle?
2
Wiring for kitchen remodel - appliances, electric oven/microwave combo, fridge, 2 dishwashers