I am replacing several old mechanical 120V 2-pole thermostats each of which controls both a blower fan (which blows air over hydronic coils to push warm air into the room) and a single central circulator pump (which circulates hot water to each blower fan unit). To function correctly, the pump must run when any fan is running, but each fan only runs when its thermostat is ON.

Currently, both poles of each thermostat are turning on LINE voltage to both the corresponding fan and the central pump. As shown below: 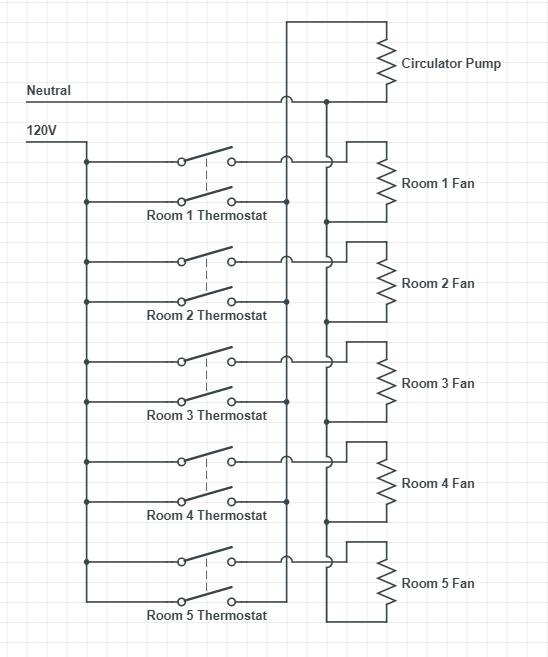 I would like to replace these thermostats with new 2-pole smart thermostats (this unit: https://www.sinopetech.com/en/product/smart-double-pole-thermostat-for-electric-heating-3600-w-zigbee/) but it requires a voltage difference across the poles, so my plan is to wire one pole to hot for both the fan and the pump and the other to neutral only the fan: 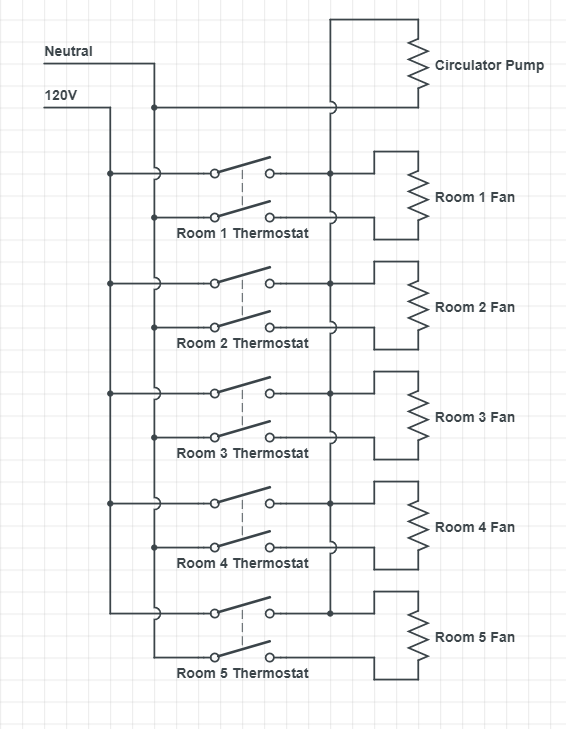 I'm confident this should work, but the potential issue I see with this is that when any thermostat is ON, the hot leg for each fan will be energized (although a complete circuit wouldn't be present since the neutral would be open). Is this permissible by NEC and is it safe?

Your idea probably won't work correctly to begin with

Your proposed setup probably won't even work quite right, whether you use old-style mechanical thermostats or new-style "smart" thermostats. With two-pole mechanical 'stats (such as the Honeywell CT410B), only one pole is thermostatic as a general rule, with the other pole simply being a disconnect. As a result, you'd get improper operation, either with all the fans running when any thermostat calls for heat or the circulator running if any of the thermostats are switched on despite a lack of heat calls.

Smart thermostats, unfortunately, fare no better on this front; some use TRIAC controls similar to light dimming, and won't work for this anyway, but even those that use relay switching likely only thermostatically control a single pole, with the other pole switched by a mechanical ON/OFF switch. (At least, that's the case for the Lux PSPLV512 I was able to find a manual for -- as is typical for "smart" gadgets made by gadgetmakers who think that they know better, the documentation for the thermostat you linked is terribly insufficient for me to determine if your choice of thermostat actually will work for this application, but I doubt it.)

Better plan: use some relays

A better idea would be to use single-pole thermostats in the hot wire, along with simple relays for controlling the circulator pump from the individual fan-coil thermostat signals. This way, you get proper thermostatic control of all the parts involved, without any worry about "backfeeding" of voltage into places you don't want it to go. You'll want UL-listed relays with 120V coils and enough HP rating to control your circulator; for fractional horsepower circulators, a set of RIB2401B relays will do the job for sure (they're rated for 1HP at 120VAC), but lesser-rated relays will work as long as they're big enough for the circulator load. Each relay has its coil connected across the corresponding fan, with the common terminal on each relay connected to 120VAC and the NO contact on each relay feeding the common circulator bus.

5
Controlling separate heat and AC devices from a single thermostat
1
My AC and Heat systems are separate, Can I wire one or both fan(only) controls to my thermostat?
1
New thermostat for hydronic heating, no wiring labels, 3 wires
1
Installing Nest From HoneyWell T8575D Condo 8-Wire thermostats
2
Installing new 2-wire (Single Pole) Thermostats - how to install when there are 3 wires in wall?