Is it OK to drill one or two 2 inch holes into a load bearing header in my basement?

tl;dr: Is it OK to drill one or two 2 inch holes into a load bearing header in my basement made of doubled-up 2x10s on top of 2x6s? This area is in the center of my two-story house, and bridges over a 56 inch span that originally had no other support (but a couple of new 2x4s have recently been added). No holes have been previously drilled in this area, but one has been drilled into a joist nearby.

Update: Since posting my question, I talked to the general contractor again. He thinks it would be fine to drill even two 2 inch holes in the header. His reasoning is that since he added the two 2x4s, which now bear some of the load (in yellow below), the header is now only spanning ~19 inches unsupported, when it was designed for much more. He thinks a hole would have probably been fine even without the 2x4s, but it sounds like the 2x4s make the situation clearer.

Diagrams: my construction terminology is not good, so I've created some diagrams to show exactly what I mean and what my plans are. 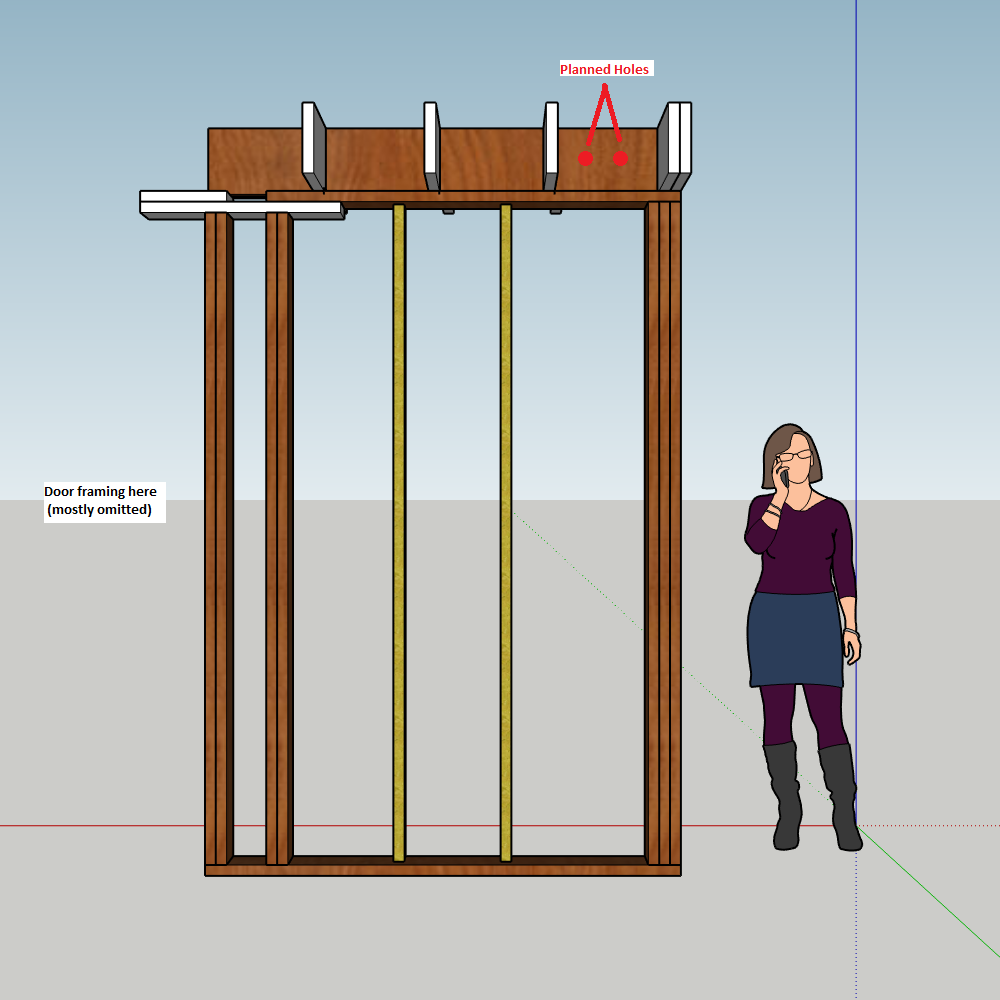 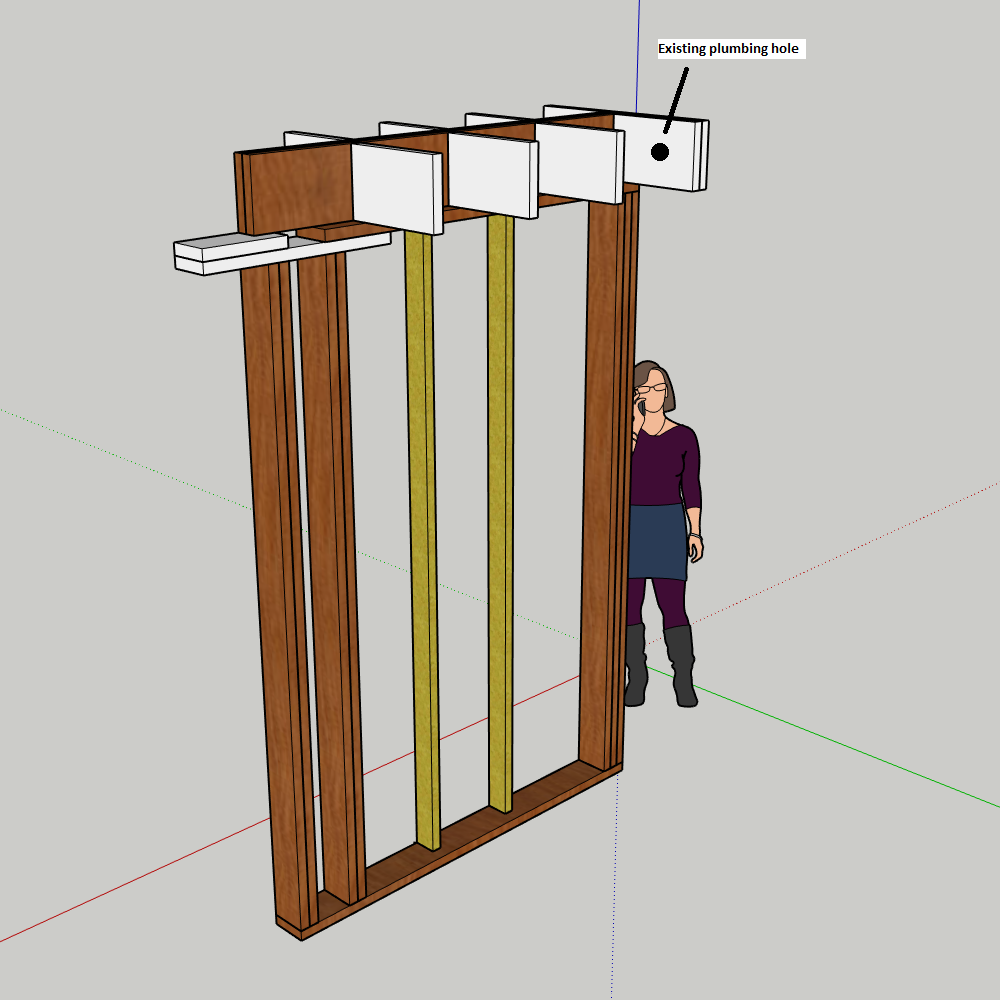 Side view (with joists omitted): 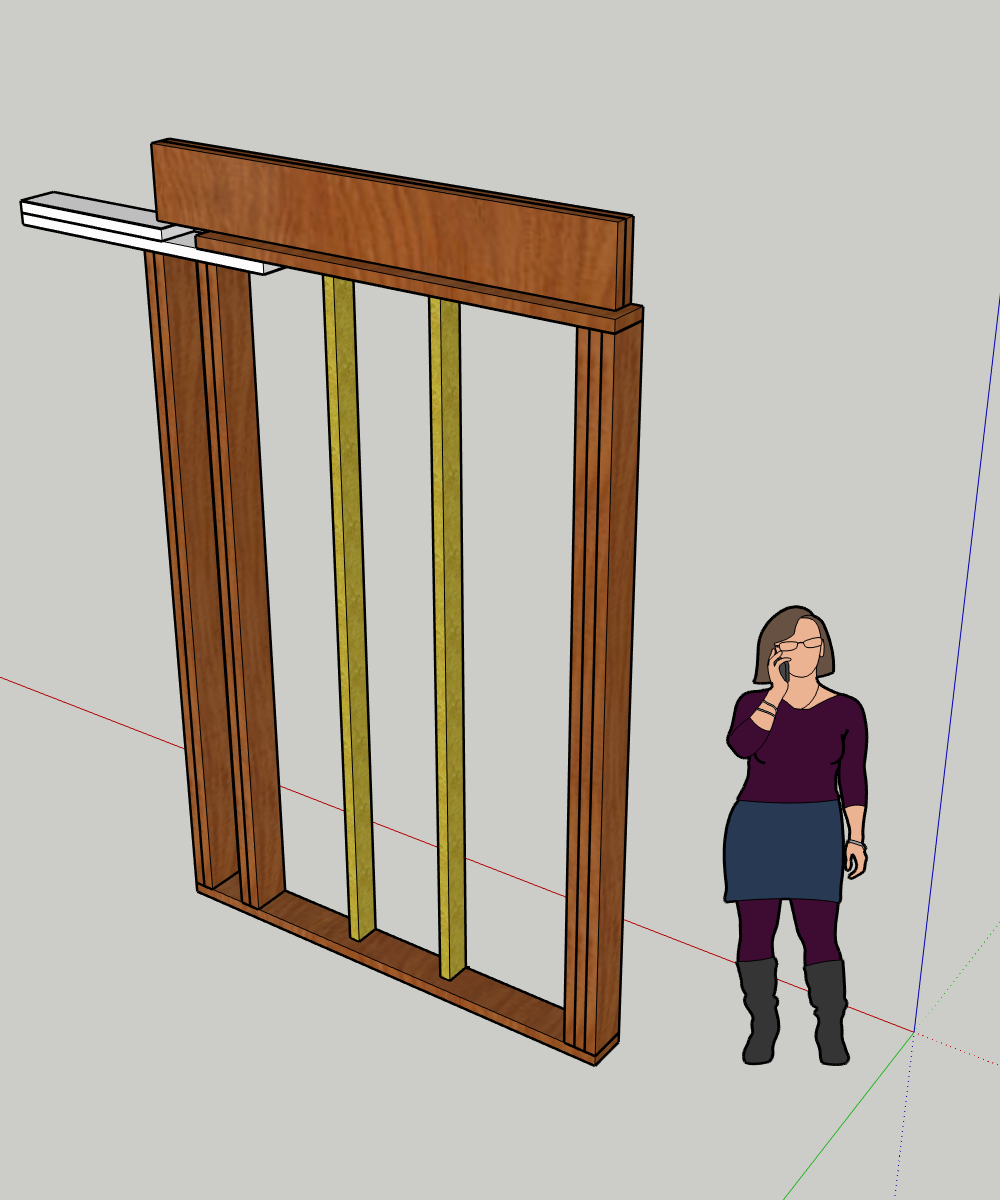 Context: I'm having my basement remodeled, and I am planning to run conduit myself to one of the new bedrooms and the only interior-wall path to the attic (for any future needs in the rest of the house). The routing is extremely difficult here, and going through this area is pretty much my only option. It's also behind my furnace and only accessible from one side. I've run my rough plan by my general contractor who's also personally handling the framing, and he thinks it's fine. But I just realized today when making my final detailed plans that this area is much more heavily constructed than anywhere else, so I want to tread carefully.

While your local building codes may vary somewhat, please refer to this IBC document section on "Notching and Boring" of load bearing members:

According to section R502.8.1, you can bore a hole up to 1/3 the width of the member as long as it is not closer than 2" to either edge of the member. Also note that you cannot bore or notch engineered beams unless you have the modifications to the beam certified by a qualified and registered engineer.

I would proactively check with your local AHJ (i.e. building code compliance office) so that you are aware of any differences they may have from the IBC. That will help you a lot when the time comes for the inspector to pay you a visit and sign off on the work.

No problem, put the holes near or slightly above the vertical center. The horizontal center carries very little load; known as the "neutral" axis. And stresses are low for that short span with 2 X 10 , unless you have a swimming pool above it.

Yes you are fine. A hole can be up to 1/3 of the width meaning you are good for about 3". I would try to center them and space them out if you go the full 2".

Also whenever I drill larger holes in joists I like to add a crosser right in the area going perpendicular from that joist to the next. Yes this does not help with the direct load but holes this size should really have no bearing on issues with direct load. The crossers help the deflect or movement which while super low risk still the greater chance of being an issue in the long run.

Also based on your 2x's being married together you are allowed more than 1/3 for your hole diameter and all regs/codes usually allow this to go up to 50%. So you would be code going through with a 4.75" hole where your picture noted (given 2x10 is 9.5" wide).

Not the answer you're looking for? Browse other questions tagged framing joists conduit load-bearing hole or ask your own question.

1
Replacing a spanned “beam” with a cantilevered beam
6
Can I cut a hole in a 2“ x 8” joist that is less than 1/3 the height of the joist, leaves at least 2“ above and below the hole, but is 10” wide?
1
Holes in offset sistered joists
16
Contractor cut joist hangers to make them fit
1
Contractor cut joists short (followup to earlier question)
1
Is the wooden-stud basement wall that runs next to & parallel to the shared concrete wall separating two townhouses load-bearing?
2
How to fix a joist that has been cut out