Filling gaps in a concrete floor

Our 1950's brick two story, three bedroom with a basement is a pretty common type around Toronto. We're doing some demolition and cleaning up in the basement. We are fairly sure we want to sell; our original plan was not to finish the basement, but to take it down to "clean"; painted cement floors, painted concrete block walls.

The basement was finished to a certain extent by a former owner.

However, we just pulled up the carpet and plywood subfloor, and as we do it, we're finding that this area does not have smooth concrete under it. It has rough concrete instead, looks like it was not finished.

More confusingly, that concrete appears to have been poured between 2x4's, so each strip of concrete is about 8 feet long and 18 inches wide. Now 70 years later now, many of those 2x4's have rotted, and for those we can look down and see soil! 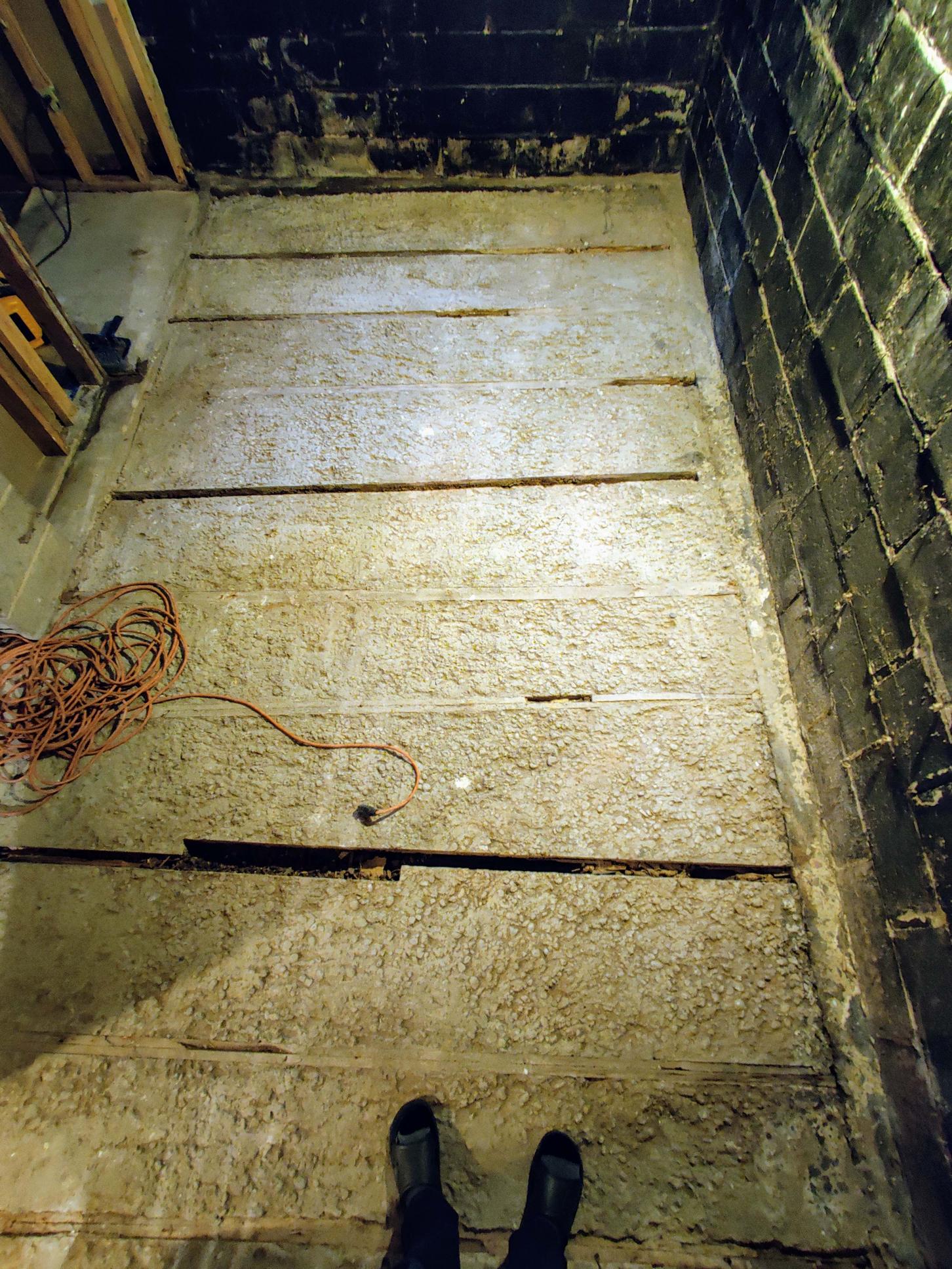 I've had a recommendation to pull up all the 2x4's and just pour self leveling concrete in the gaps. Is that the right direction? If not, what other directions would be good?

Self-levelling cement can be quite expensive. You might want to fill the deep gaps to the level of the rest of the floor, and then top (the whole mess) with a self-levelling product if that's your desired end-result. If you are just "cleaning up the basement" and don't have some plan in mind that calls for a very flat floor, you might also consider troweling on "sand mix" to make a finished troweled surface after you fill the gaps, without getting too bent about self-levelling (and beware if the overall floor is not actually level when you let self-levelling cement loose...)

There's a case to be made for demolishing the whole mess and starting from scratch if what you see is "dirt" (quite likely given the workmanship and age) rather than a nice stone base, but if it isn't moving or otherwise causing issues, that might be a lot of work and expense for not much real improvement. So I don't consider it a strong case unless you have something particular in mind where that seems like it might be worth the bother.

Not the answer you're looking for? Browse other questions tagged basement foundation or ask your own question.

3
How big a problem is wood embedded in a basement concrete floor?

45
Should I use a subfloor for a finished basement's floor?
7
Does 100 yr old concrete floor need replacing?
1
basement floor crack widening in newly built home - is this a problem?
0
Basement Floor Feels Uneven