Why is my hot water baseboard heater not heating?

I have classic cast iron radiators in my house and then one "modern" one pictured below. It was installed in the 80s from what I know. It doesn't seem to produce much heat at all.

BTW, it is on the second floor of the house where I also have a cast iron radiator which works great, so it's probably not a matter of water pressure or anything like that.

I'm not familiar with these radiators, are they not supposed to be hot when you touch them? Or is something wrong with this particular one? What could be wrong?

Should I change it with something better? What? A modern radiator? Used cast iron one? What would you do? 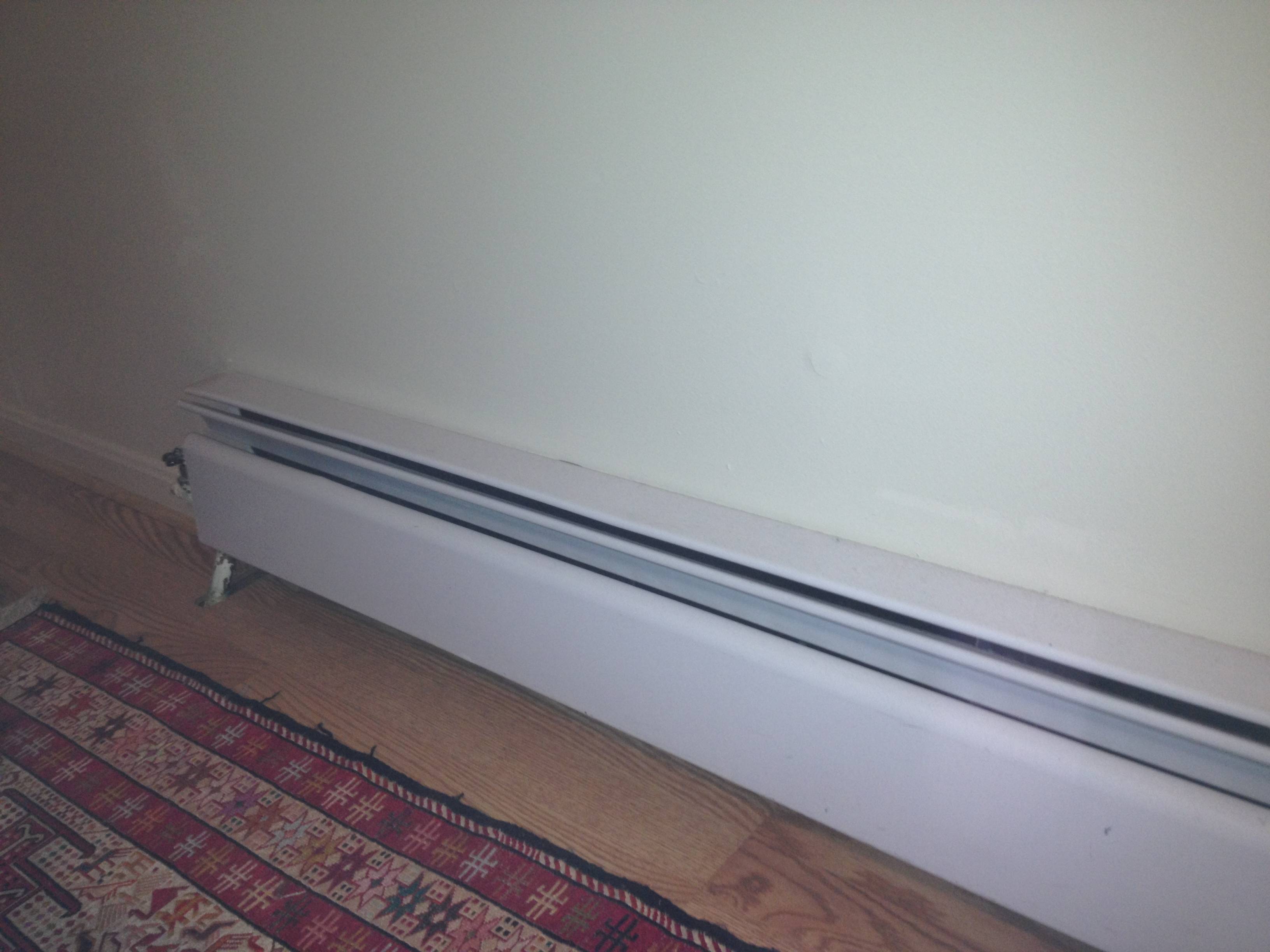 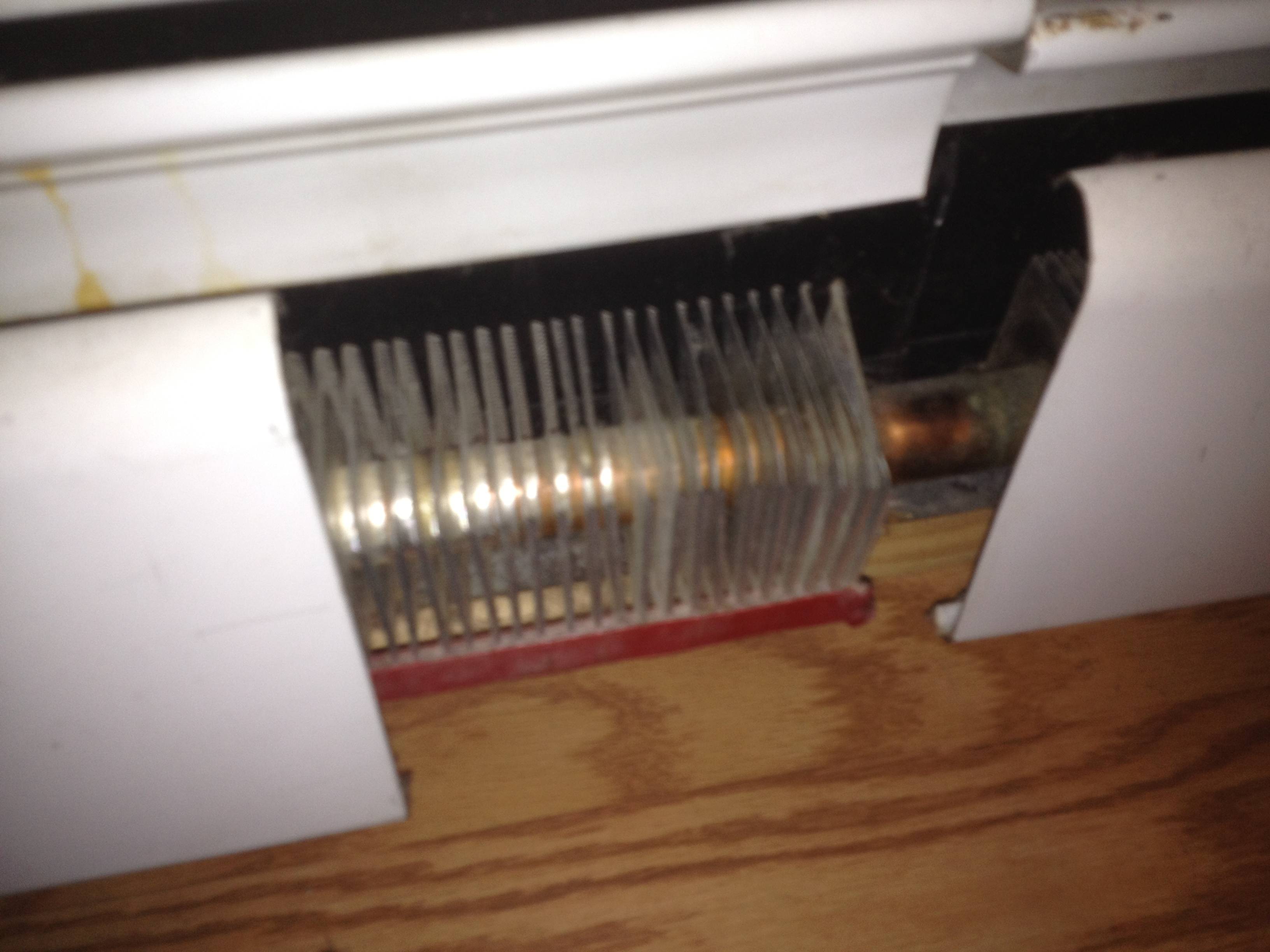 (Edit: changed the title, because these seem to be called 'hot water baseboard heters')

This type of radiator should be warm to the touch, not hot like an cast iron radiator. If you touch the fins with two or three fingers it should feel hot enough to be very uncomfortable. Lastly, go to incoming pipe coming up through the floor again, it should be very hot, too hot to touch for more than a few seconds. Usually the water moving through the pipe is 150F to 180F. Then feel the outgoing pipe again, it should be almost as hot as the incoming side. If the outgoing is not hot you have a blockage or bad circulater. You should not be able to hold your fingers on either the in or out flow side these pipes for more than a few seconds. If you have a automatic bleeder on the radiator get rid of it and install a manual bleeder. Then run heat and bleed again. Then again one hour later.

I read this article about the differences b/n baseboard and radiator and it seems to me that there are two issues:

1) The perception that you get from the two heating bodies is different, the cast iron radiators just give a sense of warmth.

2) The radiators are radiating heat long after the furnace is off unlike the baseboard heater.

In addition to that the window on top of that heater still has a window AC unit left from the summer which works against the heater.

My conclusion is that I'll remove the AC unit immediately but also I'm thinking whether changing the water heater to a cast iron radiator might be a good long term investment.

You might have a couple of things going on here. Is every radiator on the second floor on the same zone (controlled by one thermostat)? Is this system forced or gravity fed?

For forced hot water you might have a problem with the flow. Quite often to keep the water temperature consistent in each radiator they put a venturi "t" fitting at each radiator location. If the run up to the baseboard becomes too long up to the radiator, or the "t" is not the correct type, the baseboard will not get the water it needs.

My old house had this type of setup where the baseboards were tapped into a 1" cast iron pipe in the basement. There were "t" fittings that went into each room's baseboard and most of the runs were insanely long so the water never made it. Some of the baseboards would feel warm but never hot. The water looped around and around in the 1" pipe in the basement. I had the baseboards linked together one after the other. The drawback to that method is that the last radiator in the series will not have as much heat as the first. It flows so fast and the apartment is small enough that it does not matter.

The water should be flowing fast and hot enough that you can't touch the copper pipe at each end of the baseboard. I can also feel the water flowing through the pipe.

A professional should be able to properly diagnose this.

I think the key to the problem you're having is found in the following paragraph from the article that you linked to in your answer:

Your baseboard and radiators are all connected to hot water loops. You most likely have more then one loop in your house. Each loop will be controlled by a thermostat located in a common area to all the radiators on the loop. Your baseboard is most likely on a loop with other radiators and as such the issue described above is occurring.

If the above is the case, you're probably best to change the baseboard to a similar radiator to match what you already have throughout your house.

If the flow is blocked, then both the inlet pipe and the outlet pipe will be cold. Even if hot water got into the pipe, if there's no flow to replace it it will go cold fairly quickly. It will only gain heat by it conducting through the pipe and water without flow, which takes a long time and that heat would be lost before it ever got warm at inlet or outlet. It would seem that the baseboard is just very efficient so the water is coming out cold. But that doesn't sound normal either. Perhaps there is a trickle of flow which is enough to keep the inlet pipe hot, but the small amount of heat delivery is easily dissipated out by the radiator element. Could also be that the regulator on the baseboard is not opening proerly or there could be a blockage in either the suply or the outlet pipe, not necessarily the baseboard element itself. Some of these systems also have valves in the basement for each radiator, to balance the heat distribution and this one could be closed down too much.

A baseboard convector is really just a tube with fins. So if the incoming pipe is hot and the outgoing one is not, then there's definitely a water flow problem. This could be caused by various reasons. Being air bound is most likely. You say the system is bled. Is there a bleed valve right on the baseboard? If not, than it might be pretty difficult to properly bleed it, especially since it has been added to a system with all CI rads.

If you determine that this baseboard is air bound, I would open another question askin on how to bleed it. With it, provide a picture of near boiler piping and as much info about your system as possible.

As for the second part of your question - I would recommend just getting rid of unsightly baseboard and getting a proper cast iron radiator.

I wonder... you say "It is properly bled...", but I'm not totally convinced. That's a 2nd-floor zone? And there's a real air bleeder WITHIN that 2nd-floor zone, preferably just about centered within the zone? Or are you just counting on the boiler's bleeder (probably in the basement) to bleed the whole system?

Each floor should have a bleeder someplace. If not, a large air bubble can collect in the radiators on that floor with very little hope of being absorbed by the hot water circulating through that zone. On 2nd & higher floors, the bubble may be large enough to prevent the circulator pumps from working AT ALL, since they rely on siphon from downflow to assist upflow.

The bleeder should be centered within the zone, because an air bubble tends to find its way to the center of a level vessel - that's how a good spirit level works - and the zone should be bled when it's NOT calling for heat.

It is my understanding that a fin type baseboard radiator will not work in a casting iron zone. I had the same problem and switched to a cast Iron baseboard and it worked like a champ

You can not have baseboard copper fin on the same thermostat or zone with cast iron. Base board transfers heat much faster therefore will sit cold while cast iron rads are hot for much longer time heating a room. Also it is not recommended to have baseboard heat even on its own thermostat and zone when you have other zones with cast iron. The average boiler temperature on a system with all cast iron is much lower than the average boiler temperature of a system with all baseboard, especially on days where it is not so cold.

What happens now is when a zone with cast iron calls for heat the boiler gets flooded with much colder water causing excessive noise from your pipes from the huge temperature difference in the water, you will now create air in the system from Cold water meeting much hotter water very suddenly. Even with the proper air removal scoops and bleeders you should never have extreme differences in system temperatures.

I have 9 zones of heat in my home and they are all cast iron except for my kitchen witch is copper fin and has 3 exterior walls. The system does not function properly unless I leave the kitchen zone off completely. I am switching to cast iron baseboard which is very expensive but will work exactly like cast iron radiators. That is what I suggest you do.

Not enough pressure in the system to guide the flow of hot water . Raise the water pressure using the flow control valve to 24 pounds and see if this corrects the issue.

Not the answer you're looking for? Browse other questions tagged water radiator heater baseboard or ask your own question.

0
Why does the pipe to my radiator get hot, but the radiator itself doesn't?
2
What could be causing the humming sound in my hot water radiator?
0
Would pipe from radiator to bottom of hot water tank be supply or return?
0
How do I force pump to force supply to radiators at top of house,
2
Water radiator system has single loop instead of flow & return pipes -- does this make sense?
1
What type of radiator/baseboard is this?
1
Baseboard water heat not heating one room; Rest of zone/house is good
1
How do I bleed a very old radiator and identify whether my system is steam or hot water?
2
How to balance hot-water heating system when farthest radiator stays cold