I'm really struggling trying to find the correct bolt for this electrical box for a ceiling fan. After taking the old ceiling fan out, I found 2 mismatched bolts that the previous person had used. One looked like a 10-32 that had been stripped at the end and was bent and the other was some type of sheet metal screw. I wanted to replace both of them with the correct bolts but after multiple trips to the hardware store I'm out of luck and out of ideas, as are the people at the stores I've asked (well one person told me to replace the whole box but that seems drastic).

So far I've tried 8-32, 10-32, 10-24 and M5.80. The 10-24 seemed the closest but won't turn once I thread it into the 2nd hole. I've circled in red below the 2 holes the bolt has to pass through. They are aligned, just the angle I took the picture makes them look bent. House is in the USA and was built in 1999 if this information is of any help. Much appreciation if anyone can tell me what the type of bolt it is please. 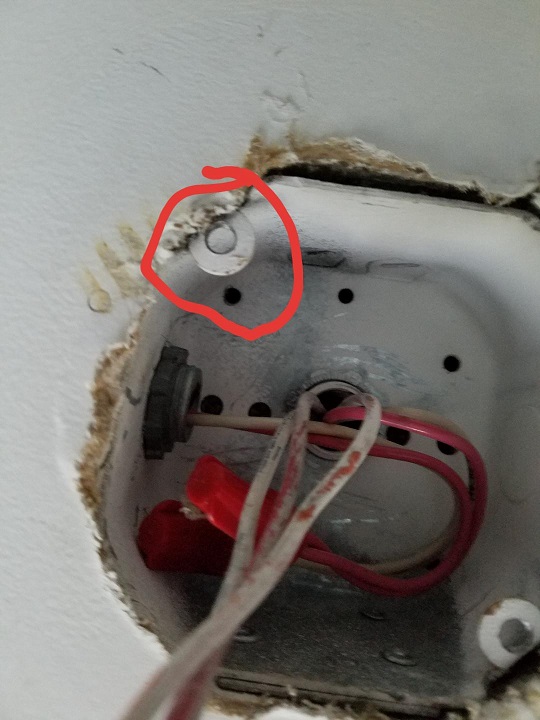 As Ed said, it's almost certainly an 8-32, with a slim chance of a 10-32. My guess is the screws aren't working because the threads got damaged by the old incorrect screws. This is most likely why it was suggested you replace the box. If the threads are damaged I would probably replace the box. It's a chore but is the best option.

The alternative (which may violate the UL listing and/or NEC which are there for your safety) would be to re-tap the holes at a larger size than the damage. This could be done with self forming screws or with a drill and tap set. However, this will almost certainly result in a weaker connection and given this is an overhead box holding something up above people's heads and someone could come along and do something later like install a ceiling fan I would not recommend it.

Not the answer you're looking for? Browse other questions tagged electrical ceiling-fan bolts or ask your own question.