Due to covid-19 all indoor pools in my area are closed for the foreseeable future. Kids being swimmers, I purchased an Intex 15' round above ground pool and installed in it in the garage. It worked well over the summer, but I would like to turn this into a year around solution, at least through this winter. Since I hope this is only for one season, I am not looking into a full blown pool heating system and am trying to keep this on a budget.

I am considering using a tankless, on-demand water heaters running on LP to heat the pool and am looking for pointers why this won't work or is a bad idea. Taking one manufacturer, it seems that specialized pool heaters are double the price of a water heater. I am trying to keep my initial outlay to ~ $1,000, but also wonder how much it will cost to heat. Water Heater: https://www.rheem.com/group/rheem-tankless-mid-efficiency-tankless-mid-efficiency-64-direct-vent-indoor VS Pool heater: https://www.rheem.com/group/rheem-residential-pool-spa-heaters-above-ground-pool-spa-heaters-106

Some info: Pool Size: 5,000 gallons. Garage is cinderblock construction with roof, but no insulation anywhere. We are in the Washington, DC area so avg winters are hovering in low 30s overnight. Pool currently has a 320 GPH pump.

Also, how to ballpark estimate the cost of heating:

Assuming an initially cold pool at 50 degrees, at 6GPM and 35 degree rise, I can circulate all water in the pool in 11 hours, and get the pool to 85 degrees. (78 is enough for swim practice). Now all the heat loss starts and I need to keep water circulating, to keep it as 78 degrees. How much LP would I be burning through on a daily basis?

Updates based on questions asked: 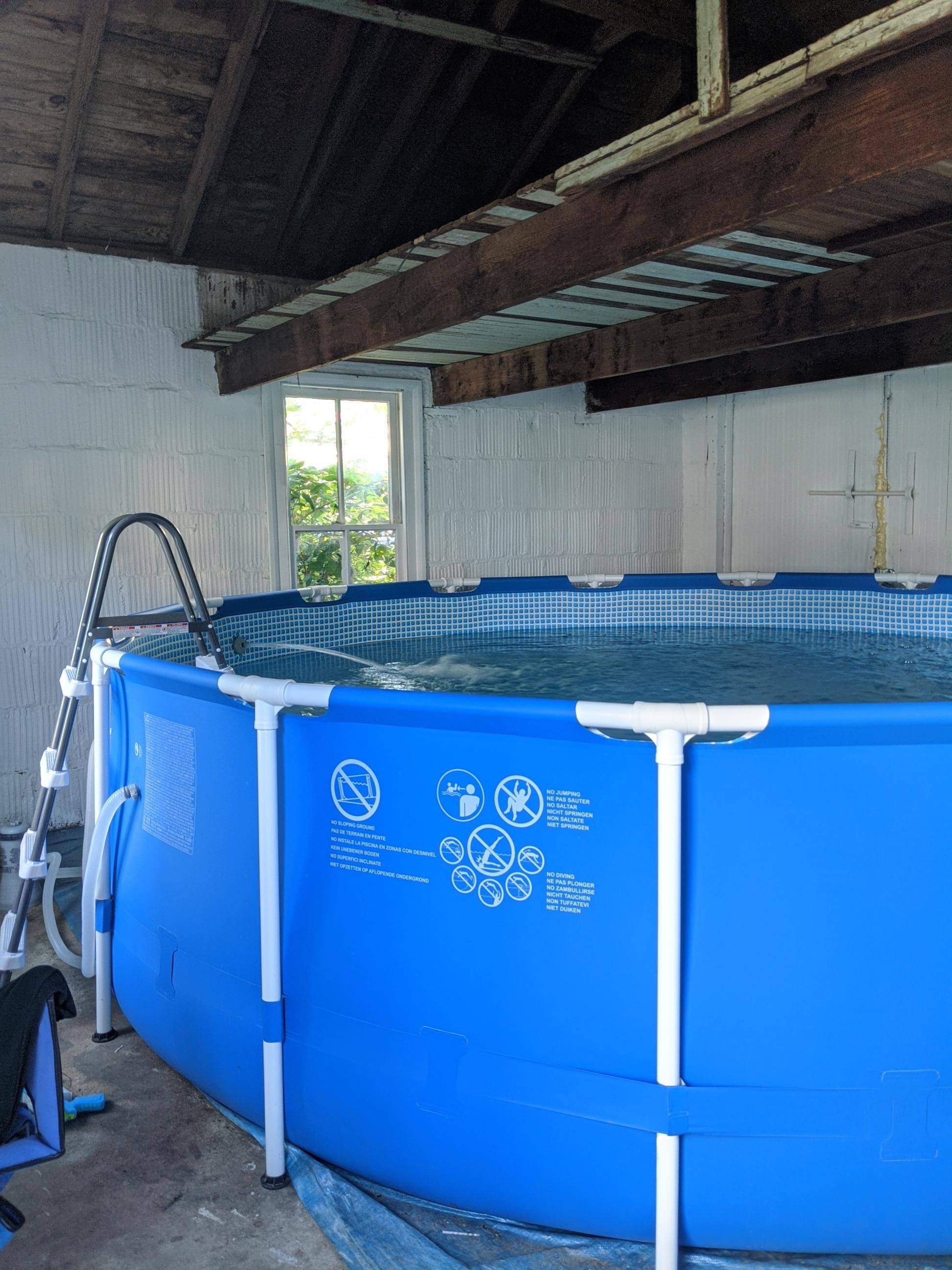 I'll assume a basic 20x20 two car garage since you haven't specified and it fits a 15 foot pool. Your basic 8" thick cinderblock is R1.11 and a typical uninsulated roof is about R1. ignoring roof slope, 400 square feet of R1 and 640 square feet of R1.11 (that is optimistic if the garage doors are uninsulated metal, as is typical for uninsulated garages, but let's ballpark it for now.) That calculates out to 976, or to be simple since it is a ballpark, 1000 BTUs per hour per degree F, so 24,000 per 24 hour degree-day.

In January, you'll need 31,248,000 BTUs or 341 gallons of propane in the mythical 100% efficient heater, or 414 with your chosen heater at (apparently without spending too long delving the documentation) 82% efficency.

Right - your question was "gallons per day" so it looks like an average of 13.35 in January and 6.27 in October. You can work out the other months if you like, or compute the whole heating season. [1]: https://w2.weather.gov/climate/xmacis.php?wfo=lwx