What are some reasons that my 240V clothes dryer connection (outlet) suddently only has 18V per side?

My clothes dryer suddenly stopped working and I wasn't sure if it was my (new) dryer or the power outlet.

I checked the circuit breaker and reset it but the dryer still didn't work.

I then unplugged the clothes dryer and used an auto-ranging meter to measure the AC voltage on the actual house connector (where I plug the dryer in). It looks like the following: 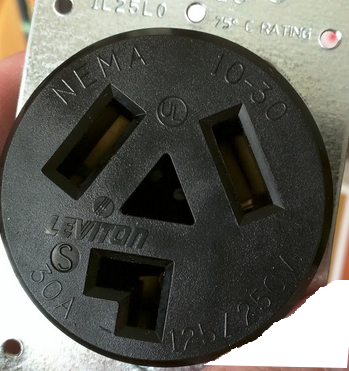 From other sources I've learned that from ground (L shaped port) to each of the other terminal ports I should get around 120V. However, I only get about 18V now.

I double-checked my meter too by plugging it into one of the other househould sockets and I got a proper 120V as expected.

What Are Possible Reasons? What Should I Check Next?

What might be some reasons that this circuit suddenly only has 18V on each side? I could understand if there was no voltage, but it seems odd that there is 18V per side?

Is this a common thing to happen with the circuit breaker itself?

Or is it just completely unknown? Just curious if it indicates a starting point?

When the electrician arrived he plugged the dryer back into the receptacle but didn't quite push the prongs all the way into the socket. He then connected a meter probe on each of the exposed prongs* (two at a time) and measured voltage that way. Doing this, he determined that there was power on the socket but the dryer was malfunctioning.

*This seemed dangerous to me and I stayed out of the way.

History of that dangerous socket

When they started grounding things in the 1960s, the appliance industry asked for a "pass" on dryers and ranges connecting via NEMA 10 receps (hot-hot-neutral). They were afraid a compulsory conversion to the modern NEMA 14 series (hot-hot-neutral-ground) would result in customer confusion and lost appliance sales. So they haggled with the NFPA, saying "let us 'ground' the appliance chassis to the neutral wire. Yes, that will electrify the chassis in the event of a neutral wire failure, but those are rare, because that wiring is rarely disturbed". NFPA accepted that, provided the appliance makers start designing ranges and dryers to be able to connect to both NEMA 10 and NEMA 14.

Code historically required NEMA 10 dryer and range circuits either use /3 cable (which has a white insulated neutral) or SE cable (which has a bare meshed neutral wrapped around the other conductors). /3 cable started being made with a ground wire, which was awesome, because even though many sockets were going in as NEMA 10, ground was present in the box and the homeowner could convert to NEMA 14 at leisure. However, some installers illegally used /2 cable, abusing the ground wire as neutral. This bad work is not grandfathered because it was illegal at time of installation, and must be removed on sight.

In 1990-ish, NFPA finally outlawed NEMA 10, requiring NEMA 14 going forward. By this time the appliance industry had gotten appliances "ready" for both styles of connections, either properly grounding, or doing the "sanctioned bootleg" as described in the installation instructions.

The symptom you describe is very typical of a neutral wire (that wire is neutral) that has been disconnected at both ends. The dryer is unplugged, and either at the socket or the panel, the wire is loose and has "opened", possibly with some arcing and sparking first. Since it was heard locally at the dryer, it may be in the socket. Ideally you should read 0 volts to that wire, however due to "capacitive coupling" you read a little bit of voltage. And that phantom voltage sort of "follows the meter around", which is why you get 16V from hot L1 and 16V from hot L2 (which should be impossible, right?)

Very high impedance DVMs (read: most cheap meters) are particularly prone to picking up "phantom voltage". There is voltage there, but possible current is so tiny that it's incapable of even moving the meter movement on an analog meter.

That lines up with the fact that you had the panel changed. A problem at the panel would make sense.

While you're in here, deal with that socket

Modern society isn't safe by accident. A lot of work was done to make society safer. But that's only true if things have been modernized! NEMA 10 has not.

So, there are several paths to getting rid of the NEMA 10 socket and convert to NEMA 14.

Not the answer you're looking for? Browse other questions tagged dryer 240v voltage or ask your own question.

10
What is the proper wiring for a NEMA 14-30 240v receptacle?
2
Why must I hold the start button for my dryer to work?
1
Clothes Dryer electrical 240v between hot and netural, 0 between other hot and neutral
1
Dryer Cord will not go in all the way
1
What could cause a 240v dryer outlet to have proper voltage but not power the dryer?
3
Whirlpool electric dryer works on 120 but not 240
1
What explains a sudden voltage drop to laundry room?
1
Temporary (multi-hour) voltage drop that seems instigated by running an appliance?
0
Only one side of 220V Outlet has power. Dryer shuts off after 5 minutes