I have recently taken down a wooden wall that was attached to a stone wall. I am interested in finishing the stone wall by repointing and leaving it exposed.

My question is about the wooden wall that still exists. I am not sure how to finish it at the end, where it meets the stone wall at a right angle. I will be painting the pink wall.

Any ideas how I make the intersection look nice? 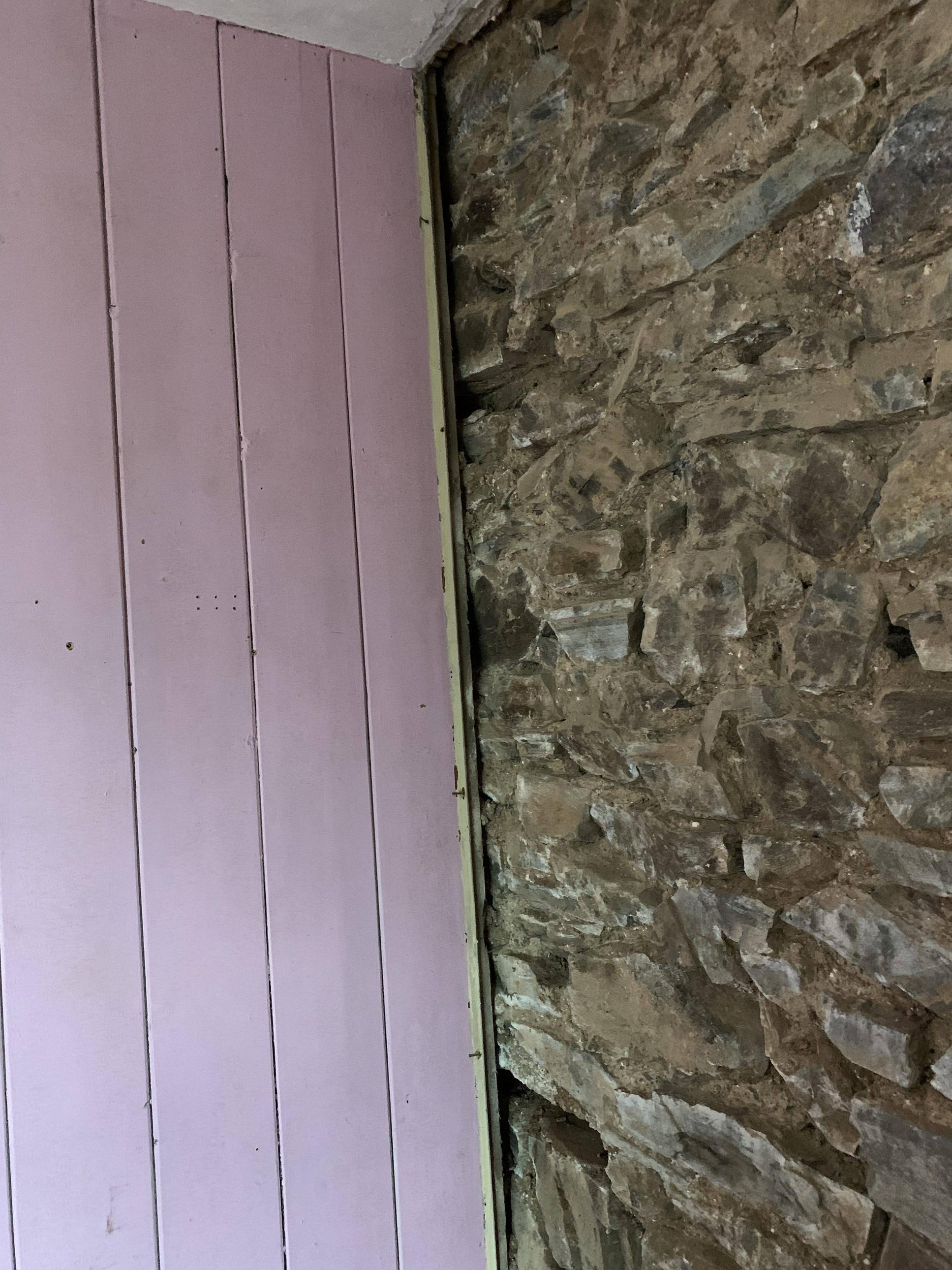 I'm not a fan of scribe-fitting to extremely irregular surfaces like this. Even if you do a great job it'll look like a child drew a river down the wall. You simply can't get it to look "professional", and it'll draw the eye to the unfortunate situation more so than now.

Ideally the stone wall would've been fit to the wooden wall, with flat cuts on the ends of each stone to fit well against the wood. That's not an option here, even if we consider cutting a channel into the stone in which to insert paneling--the existing wall is in the way of that work. I've done exactly that for remodeling jobs with good success, though.

Sometimes in art, simpler is better

My approach would be to leave it mostly as-is. Since there's a good lap of the stone wall behind the wooden wall, you don't have an odd void to deal with. I would simply remove the existing ripped end paneling board and replace it with a single board that's as wide as the resulting gap to the edge of the framing, putting a bullnose edge on both sides to match the other paneling. If the existing end board is actually full-width, a new strip of paneling (with its edges shaped to match the other boards) would also work.

This will leave a clean, straight line that doesn't attract undue attention. Paint the wall and be happy.

One approach to that sort of junction is to scribe a trim board.

One tacks a trim board in a vertical position touching the stone, and then sets a compass or pair of dividers equal to the largest gap between the stone and the board. The compass or dividers are then used to follow the irregular stone face and scribe a corresponding mark on the board. The board is then removed and the scribed line is cut, which should result in a trim board that meets the stone wall "snugly" (depending how well it was scribed you may need a few test fits and trimming to get it snug enough to suit.)

If the stone wall is at all prone to being wet, choose a trim board that won't rot (PVC "lumber" or pressure-treated.)

Hi I would either replace the wooden wall (we call that wood paneling here in the States). Below it is probably drywall. Check and see. If it is pull it down and work on the drywall or put drywall over the painted paneling.

Not the answer you're looking for? Browse other questions tagged walls stone finish or ask your own question.

6
How can I mount a security camera on the outside of the house?
0
Can a natural stone wall be made waterproof without defacing it?
1
Protecting a stone retaining wall from water running down it
0
How to repair the voids in this stone wall
0
To use or Not - Vapor Barrier for Brick House
2
How to build a mantel on rough stone fireplace
0
How to remove interior stone wall facade
3
Okay that TV wobbles when articulating wall mount is extended?
0
Building patio using natural stone and mortar