How to (re)support basement stair stringers?

Recently I had some waterproofing done on my basement. This included removing some concrete that anchored/lifted the stringer's supports so that old concrete could be removed and new stuff poured (see image 1).

I don't have a problem fixing this once the new concrete has finished setting (I was fully aware that this was on me after the job was done), but unfortunately I have no idea how to approach it.

Image 1. The darker area on the floor in the image was originally a mound of concrete, maybe 1/2" to 3/4" high stretching between both supports (you can see some remnants under the support on the left, all was removed near the wall).
Currently there's just a scrap board holding up the stairs near the bottom end (top left of image 1 in the background), and I'm just trying to go downstairs as carefully and infrequently as possible for now.

Image 2. You can see there is a slight height difference between the bottom of each stringer and the floor. There was a difference before, as there is a floor drain not too far from the lower end, but I'm sure the new concrete slightly increased the difference. A scrap piece of plywood temporarily lifts one end. It looks like there may have been a small patch of concrete lifting this part as well, but I'm not 100% sure.

Eventually I'll need to rebuild the landing that was at the bottom of the stairs which I had to tear up for this (it hides some sort of old cast iron capped off sewer pipe I have no intention of touching, just off the left of image 2).

My current plan is just to keep a scrap block under the stringer, just clean it up a little/hide it. Of course the landing I build will need to be slightly raised on that side as well, but that's no big deal. But if there's a more "legitimate" approach I'm more than happy to attempt that instead.

How sould I best approach this? 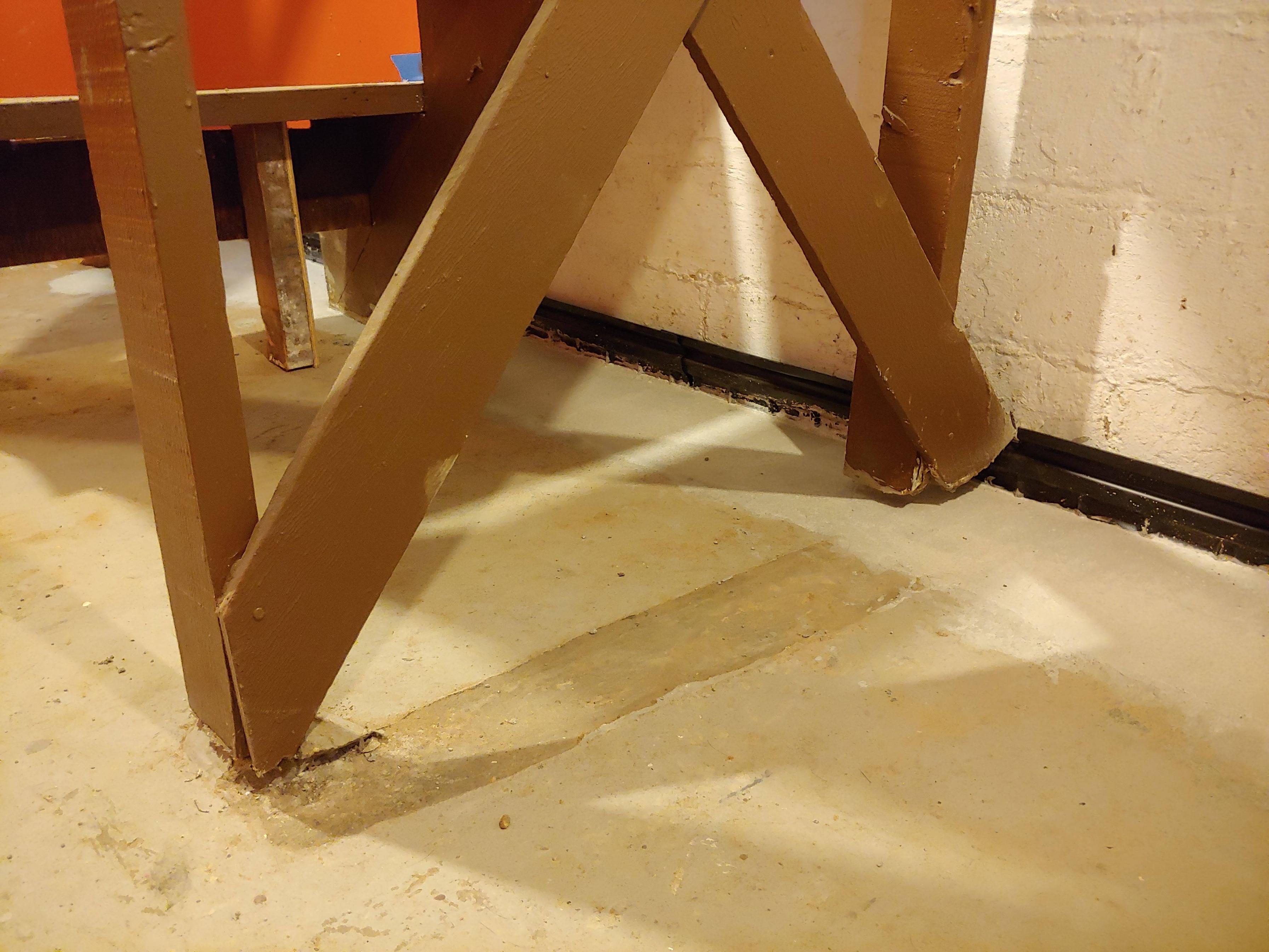 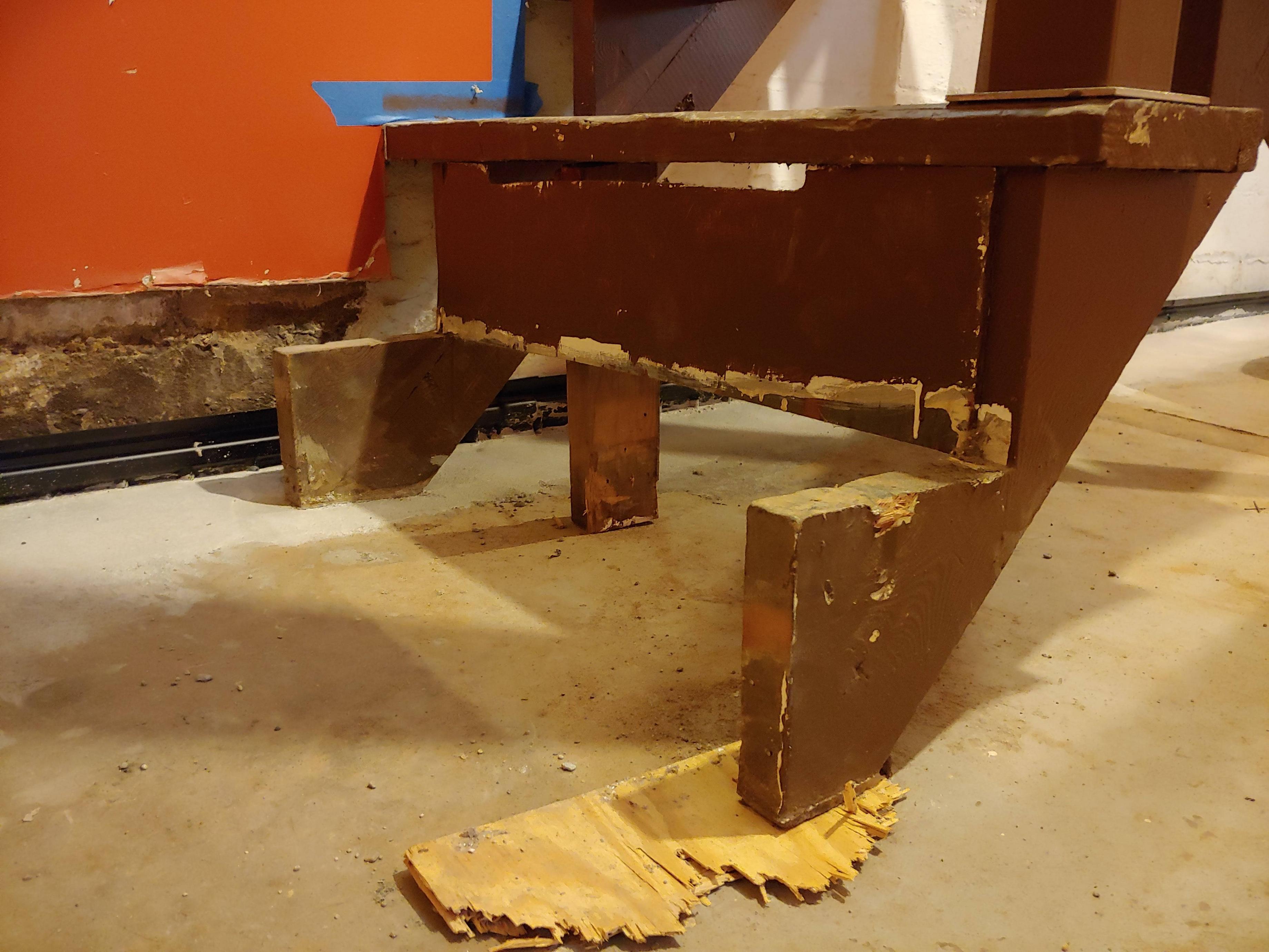 Consider installing a pressure-treated 2x8 base plate onto the floor slab, underneath the stringers. That's roughly how you'd build a new staircase by today's standards.

If you search for connect stair stringers to slab you can find a variety of drawings and photos that should be helpful. The connections I suggest are more like the inner-stringer of a 3-or-more-stringer staircase, than then outsides. That's due to using the base plate as a permanent shim.

Not the answer you're looking for? Browse other questions tagged concrete stairs support or ask your own question.

1
Remove support under interior stairs
0
How to support 1 corner of stair landing
7
How to support the side of concrete steps?
8
Structurally required? I-beam support under stair opening header
1
How do I find the angles for baseboard on an outside stair stringer?
0
How to calculate stair stringer when total RISE is small?
2
Keeping outdoor deck stair stringers from splitting
1
R302.7 Under-Stair Protection - does drywall need to be below stringers or just treads and risers?
2
Basement Subfloor at Bottom Stair Landing