How to prevent mold in ceiling below upstairs bathroom

Had previous mold issues in kitchen ceiling due to frequent leaks from upstairs bathroom. Source of leaks resolved to the best of our ability, but long term permanent fix probably some years out.

Are there any ways we can mitigate the risk of future mold growth (from now infrequent spills) in the closed space that would allow us to close up the hole in kitchen ceiling?

Shortly after moving in to our home last year, we had a problem with water escaping from the upstairs bathroom causing mold in the kitchen ceiling below. This was primarily from a deteriorated gasket on the tub overflow and a smaller leak in the old drain pipes, but also from water spilling onto the floor from the tub/shower due to people leaving the shower curtain partially open, or from excessive movement with a full tub.

The damaged ceiling drywall has been removed, leaving about a 2' x 2' hole in the kitchen ceiling, and I also (while searching for the source of the water) cut a about a 1' x 2' foot hole in a bedroom closet wall which the pipes for the shower run through. These have remained open since December.

Even with these improvements we still get the occasional very large spill which results in water dribbling into the kitchen. These happen roughly every other month. The more recent ones since the re-calking occur when water gets further from the tub and finds a crack in the old plastic tiles, and thus not directly above the existing hole in he kitchen. The water instead flows along the top of the drywall to the hole before dribbling out.

Despite the (now infrequent) water issues, we've not had any additional mold problems. I suspect the open holes in the ceiling and closet wall have provided enough airflow to allow whatever is getting wet to dry in a reasonable time.

I'm thinking short of getting rid of the kids (which we can't do for reasons...), the only real solution would be a drain in the floor near the tub to collect the spills before they find an uncontrolled path into the floor. I'm not really comfortable with doing that myself, and the we are avoiding having professionals in to work on the house for non-emergency issues at present.

We would like to close up the hole in the kitchen ceiling.

Is there something we can do to repair the hole in the kitchen ceiling while still mitigating the risk of moisture buildup in that closed space?

As long as there's any water leaking in the bathroom, you shouldn't permanently seal up the ceiling in the kitchen. I would be installing an access panel in the ceiling similar to the one pictured below. It would cover the hole, could be painted to match the ceiling but would also provide access to the area if water did leak and you could spray the area with some mold killer. The frame for the access panel could be regular base board molding or something fancier to keep the wife happy.The panel could be regular drywall so if water did leak on it, you could just replace the piece of drywall. If you don't need access to the pipes in the closet you can just repair that hole or install a similar access panel there too. 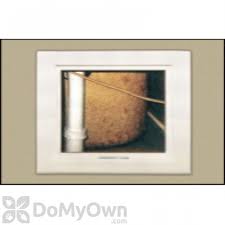 Not the answer you're looking for? Browse other questions tagged mold moisture or ask your own question.

0
How can I protect the wall behind a closet from developing a mold problem?
5
How to permanently remedy a patch of mold on a ceiling from a water leak above?
2
How can I fix this moisture problem to stop mold growing?
1
How do I know whether or not I've killed the mold?
1
Mold in my bathroom is spraying bleach and painting over with Kilz enough?
1
Do I need to do any sort of mold mitigation after a bathtub leak damaged a ceiling?
2
How should I fix a previous owners mistakes in this bathroom? (see pictures)
1
Will showering with the fan on and bathroom door open prevent mold?