How proud can a toilet flange sit above the floor?

Related to How do I replace this cast iron toilet flange?

I've removed the cast iron and am dry fitting the replacement parts. I used a 4" - 3" reducing coupling, 3" pvc and a 3" 90 to line up where the flange needs to go.

Problem: With the 90 in place, the flange is going to sit about 3/4" proud of the subfloor. (The final floor will be a fiberglass material that compresses so I'm not really counting it)

Can I create a reinforcing support for the flange to sit on to get solid support, and if it sits that proud, will it affect the toilet? Or do I need to figure some way to lower the flange? The latter would be very difficult given the very tight space I'm in.

I found a 3" flange with a 45 degree bend and coupled it to another 45 bend to get what will be a perfect fit once the 1/4" ply (underlayment) and the fiberglass sheet flooring are installed. 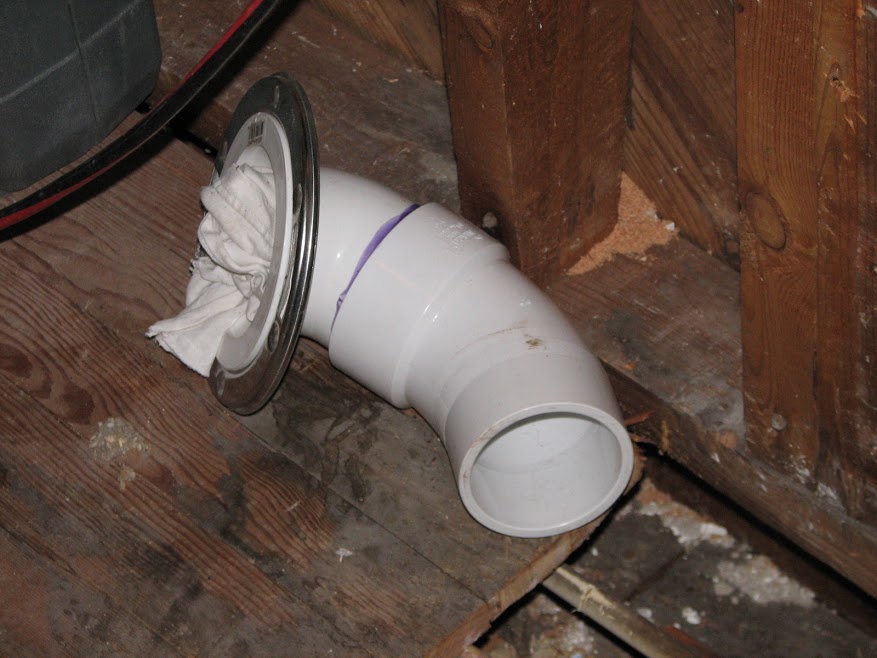 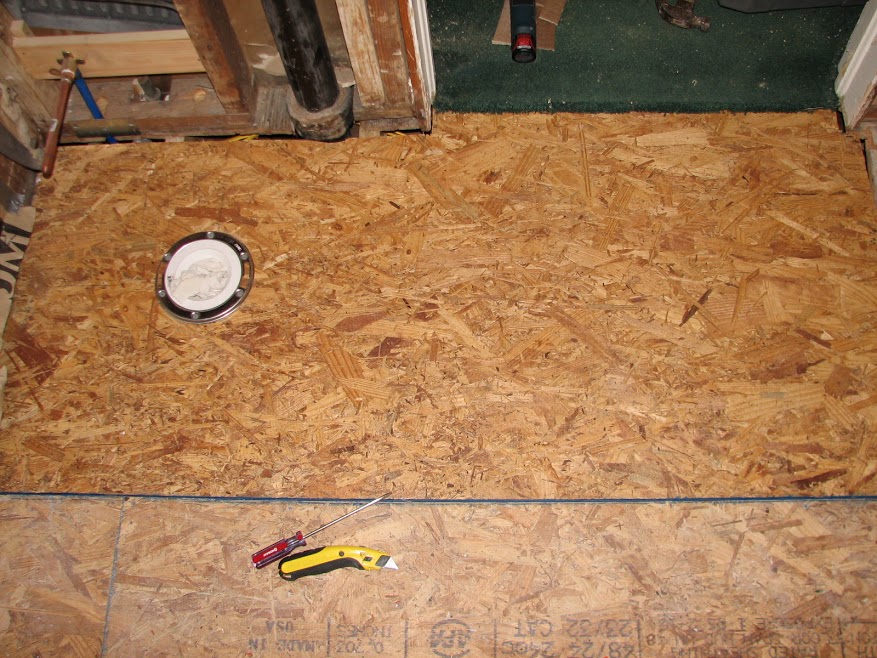 The flange is actually above the subfloor by 1/4 inch, sitting on waterproof shims on all sides.

There isn't much allowance for raised flanges in most US toilets I've seen. The critical feature is how much higher the under toilet "ceiling" is than the bottom perimeter base that sits on the finished floor. Since this dimension is intended to work with a standard wax ring, there's little chance a 3/4" protrusion will work. Not only do you need physical clearance between the flange and the "ceiling", there also must be room for the wax sealing ring.

The other potential conflict is the outlet horn and how it fits into the small bevel of the flange fitting. Again, there needs to be room for the wax to fill this gap. You do not want any direct physical contact between the flange and horn.

Simply supporting the flange is not enough. The perimeter base must be fully supported. If you try to install the toilet as things are, the toilet will be balanced on the wax ring. It will wobble every time it is sat upon, eventually forcing all the wax out until the "ceiling" is bearing directly in the flange. While the wobble will diminish at this point, it will still wobble. The seal would obviously be compromised.

Whatever you do, the perimeter base must be solidly supported. The obvious solution is lower the flange, though very difficult in your case. Another solution would be to raise the floor, which I imagine would be undesirable. The only other possible solution would be to raise the support of only the toilet base, such as setting it on a grout bed. Depending on the nature of your flooring and the actual final thickness of the grout, this may not be too bad a solution. You would need to spend enough time finishing the exposed grout around the toilet base so that it is smooth and easy to clean.

I can think of two other solutions depending on the whole picture:

1 - What kind of PVC 90 are you using to get from horizontal to vertical? If you are using a regular sweep 90 you might be able to switch to a street sweep 90 combined with a different flange that would glue to the outside of the 90. This may allow you to push the flange down farther to make up some room, as long as you are still gluing to a straight section before the curve.

2 - If this is a small half-bath with no tub or shower to deal with you may be able to lay another layer of plywood down to raise the floor level. This would work best if you are starting level with the adjoining room and adding another half-inch or so. A small difference in floor height can be hidden with a transition plate and you will never notice it. I did this in my master bath since I had the whole thing gutted and switched from 3/8 to 3/4 ply to add stiffness to the floor.

This will depend on several things:

I am unfamiliar with the brands of pan installed in America but over here they are all slightly recessed and the flange needs to be about 25mm/1" above finished floor level anyway to get a good seal on the toilet.

Also don't forget is the fiberglass you are putting in finished floor or are you putting something else on top of it that will bring up the finished floor level?

Forgot to mention could you use a male to female bend which the flange will sit into and might gain you the amount that you need?

Not the answer you're looking for? Browse other questions tagged plumbing flange or ask your own question.

18
How do I replace this cast iron toilet flange?
3
What is the correct height of a toilet flange relative to the finished floor?