I don't currently have the funding for the standby generator, and was hoping to configure my portable generator to use the existing transfer switch equipment in the mean time. The portable generator that I have is a 9000 watt unit equipped with a NEMA 14-50 receptacle.

Is there a way I can use this existing transfer switch along with a NEMA 14-50 plug and cord to power my home during power outages? 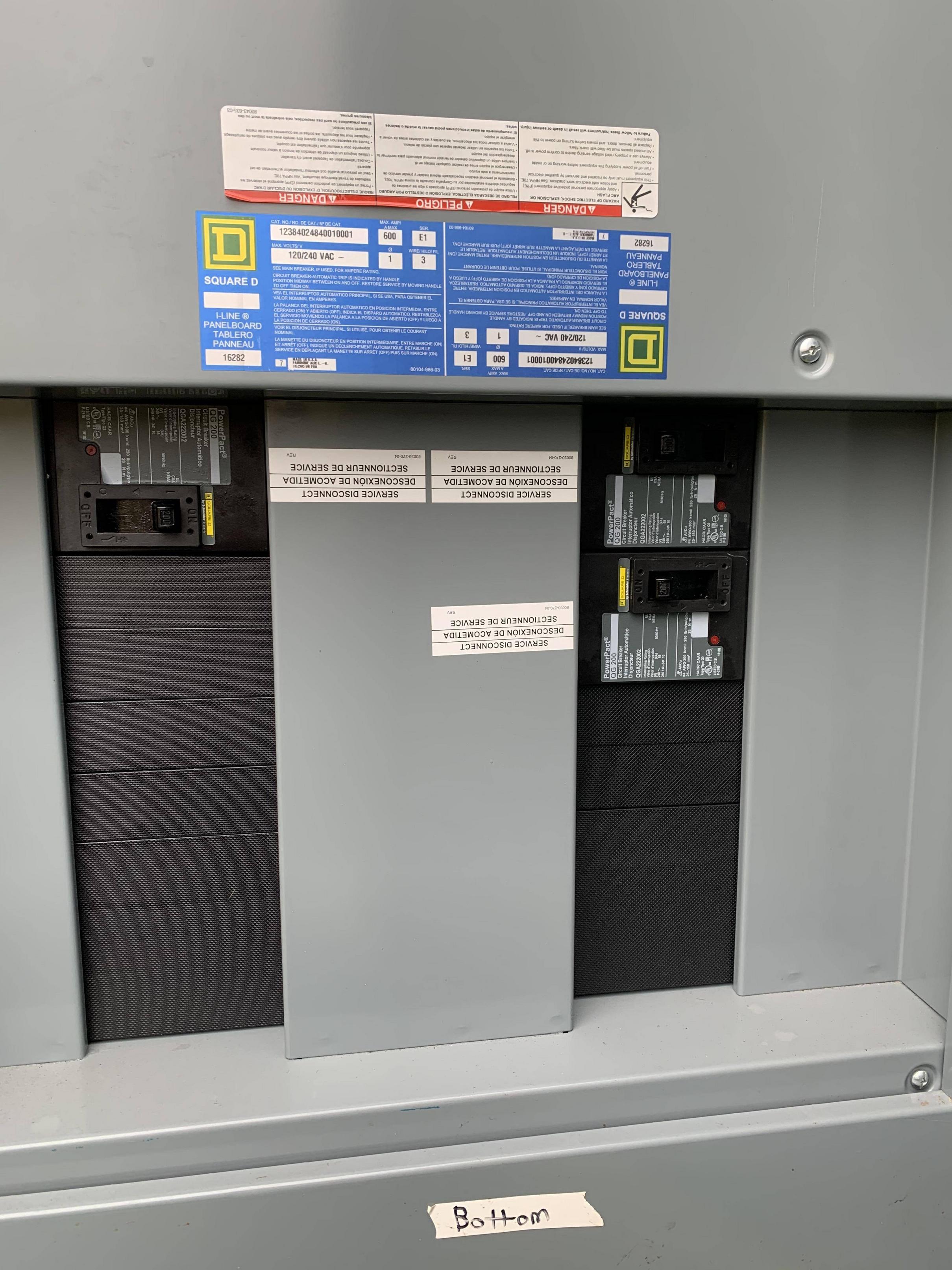 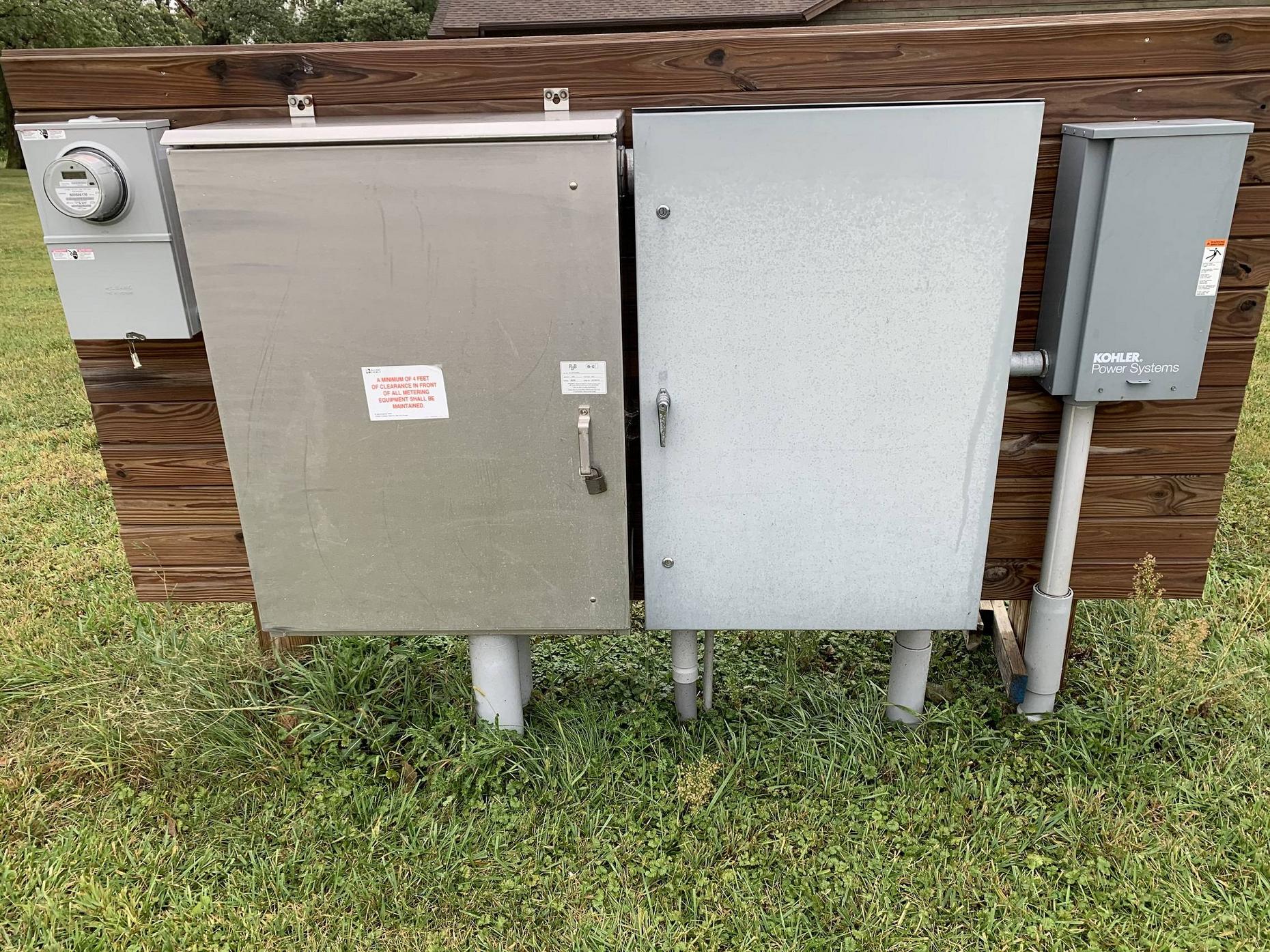 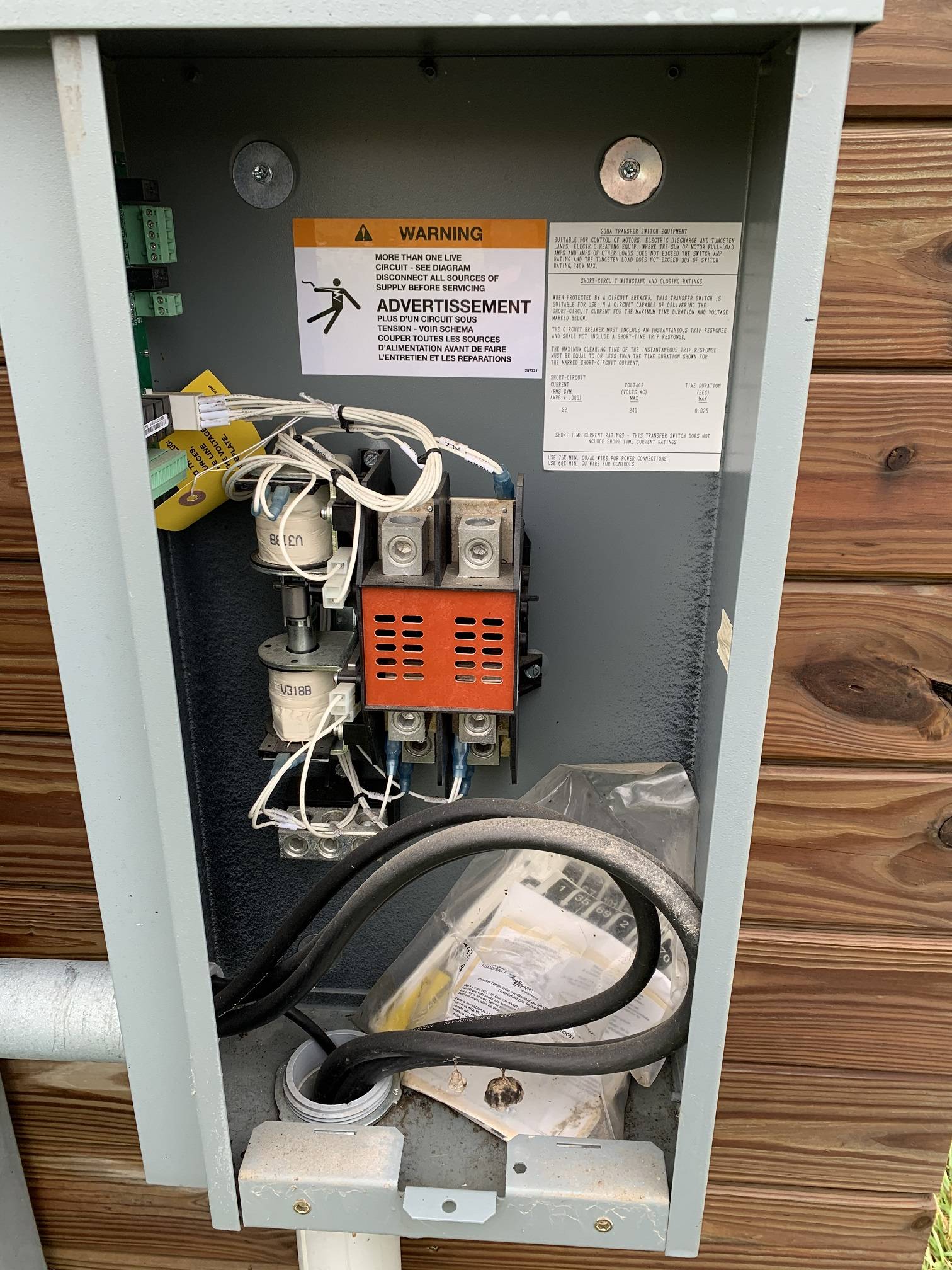 Sure, that ought to be possible. That looks like an automatic transfer switch. It was set up on only one of the two 200A feeds to your house. Presumably whoever wired your house was conscientious about putting important loads on that panel.

However, the switch is not hooked up. The wires bypass the switch. They left you some slack, but not enough slack to hook it up. Note that the wires you see go between the main panel (which is right there) and the house. One wiring run must be replaced with new wire. Obviously that should be the 3 foot run between transfer switch and panel. The installer will know this.

Knocking out a KO at the bottom of that panel and sticking a NEMA 14-50 inlet there won't be a problem. I would have the contractor do that, since it's cheap/easy work. If you want it somewhere else, you could DIY extend it to another location using Rigid conduit and #8 THHN wire. Rigid is hella expensive, but it only needs 6" burial cover so you can trench it with a garden trowel, which makes it very DIYable. No trencher rental.

The contractor will also need to add a manual "Util/Gen" button to the ATS, so you can throw it manually between Util and Gen. That will require understanding of the ATS, so hire someone who knows the system. This might bypass the electronic controller on the left wall, or use it. Don't be surprised if it also requires installing a battery.

I'm presuming you'll have a contractor do it. If you want to DIY this whole kaboodle, you'll really, really need to do the research on that ATS very thoroughly. Adding the switch button is non-trivial. I would mount the button outside the ATS rather than carving up the ATS case. If you need momentary pushbutton switches, a variety exist, including those made for the GE RR7 lighting system. Those fit in a standard form-factor and can take a weather in-use cover.

Honestly, long-term... solutions like the Tesla PowerWall (well: better than the Tesla PowerWall) are coming up so very fast that installing a big 15+KW generator may not be the way to go by the time you're ready. Heck, even today, if you homebrew it, you can install an enormous battery+solar system for the price of the bigger generators.

Even if the solar is unavailable, just get a portable generator like that one. Such a system allows a small generator to punch way, way above its weight class. For an all-gas house like mine with light electrical loads, you get to run the generator an hour a day at the time of your choosing, just to top up batteries. For big loads, the battery starts and carries loads the generator couldn't possibly; the generator's only job is to keep the battery topped up, and it runs at full power/peak efficiency until that's done, then you shut it off until needed again.

It's a sweet combo, really. And most of the time the solar carries it anyway; and when power isn't down, you have the solar backfeed onto the grid via whatever arrangement your power company will accept. So you're making money on the deal too.

You have to look at the various systems available and how they install; many will want a setup like that ATS you have.

Not the answer you're looking for? Browse other questions tagged electrical generator transfer-switch or ask your own question.