Does my furnace suck air from outside?

I've tried Googling this but the stakes are quite high and I don't want to be wrong, so I'm asking here.

Wildfires are raging in California where we live, and the Air Quality is nearing the 'hazardous' AQI level. I just bought a 6x16" 400cfm active carbon air filter/fan, and I have 1 other air purifier running in different rooms.

The problem is it's extremely cold in our house as I have the heater off. I am wondering if it's safe to turn the heater on, or if it's going to pull in air from outside?

I'll try to give you details which could help figure it out. 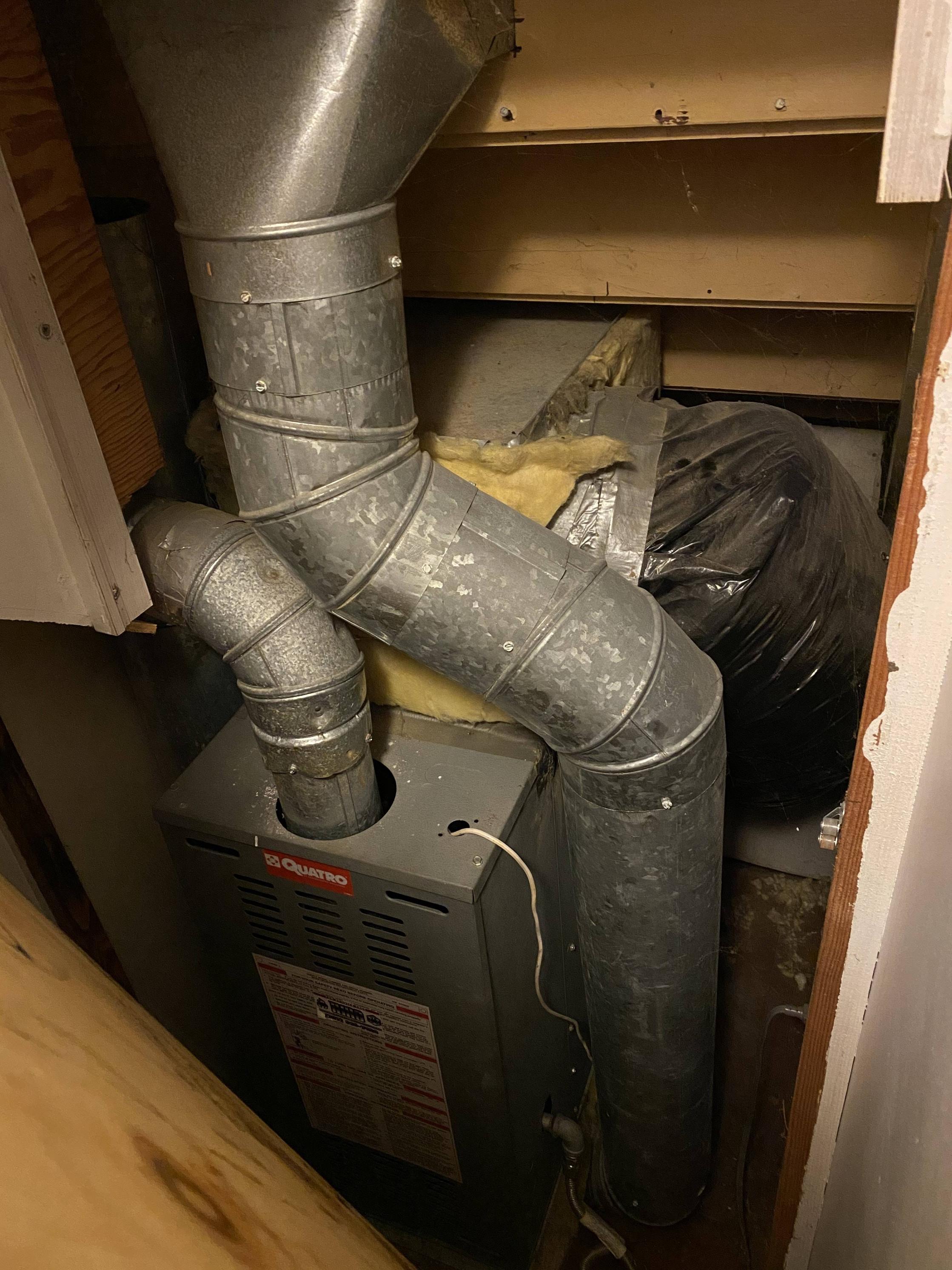 I think some of the answers here are confusing because they don't really address that your furnace has two different air intake/outlets.

One is for the combustion system. Air is pulled in from somewhere (usually outside, probably the metal duct on the right), mixed with natural gas, and burned. All of the outside air and combustion products go out of the chimney to somewhere definitely outside. Very hot air from the burning of gas heats a metal piece called the heat exchanger.

The "makeup air" mentioned elsewhere would be if the combustion loop sucks air from inside the house instead of through a duct from the outside. In this case some air from the house is blown out the chimney and is replaced by air seeping in through the cracks. This would not be code compliant where I live, for example.

The other air loop is through the ducts in the house. Typically a furnace will suck air from inside of the house (probably the vent behind your couch), pass it over the heat exchanger, and blow the now hot air out of the vents in your rooms. This typically does not pull a significant amount of air from outside because that would waste a lot of $$$ by displacing heated air to outside. Houses are not airtight though.

Your furnace is obviously gas because of the supply pipe on the lower right, and the presence of a chimney on the top of the unit.

There is really no way for anyone here to tell you whether it is safe or not. Age and presence of recalls are good places to start though. Adding a CO detector and making sure you have enough smoke detectors would help significantly.

We live with someone with COPD and I also have asthma,

If this is a matter of LIFE AND DEATH, there is not enough information in your post to provide an absolute answer. YOUR SYSTEM MAY NOT BE NORMAL.

Have you ever changed the furnace air filter? 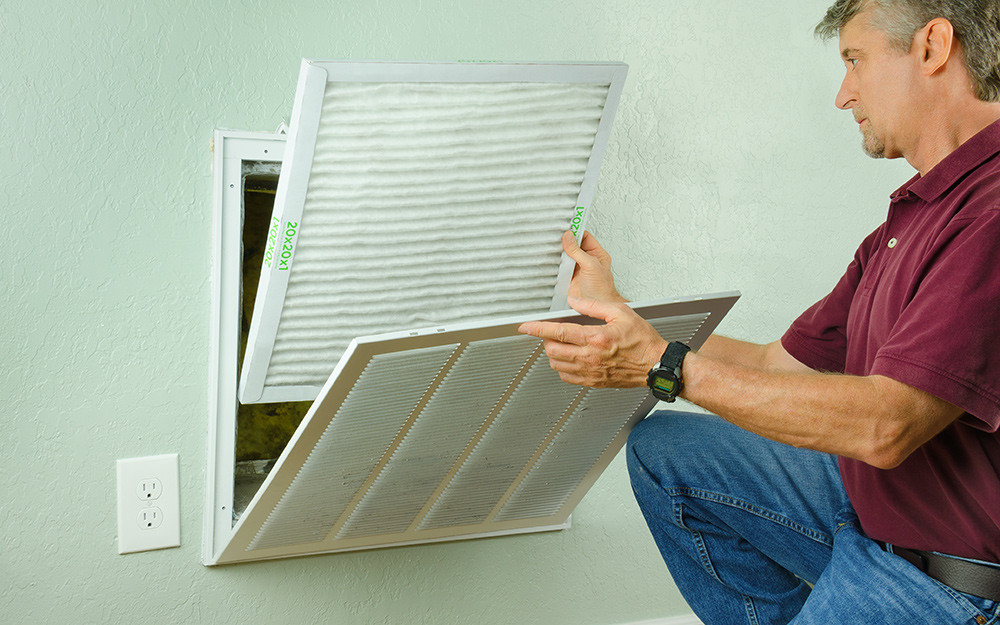 The answer is that it should have a fresh air source! This is an absolute for gas furnaces.

Some systems use the “leaks throughout the house” to get the air. The filter in the furnace is for dust to keep that out of the heat exchanger it dose nothing with the gasses that a open combustion fire box generate.

The most important thing you can do is to install carbon monoxide detectors just out side your furnace room and at each level of the home.

I did not look up the recall, but you should. Is it a cracked heat exchanger issue? Is it a fire hazard? Detectors are your first safety after verifying it is in good shape.

I can’t tell but your supply could be coming in on the unfinished part of that closet (that would be a code violation today in my jurisdiction). If the stud bays or ceiling joists bays are used they require a metal grate--one close to the ceiling and one close to the floor. This may not be required in your location but getting a pro to inspect and clean the system may provide all the answers you are asking for.

Your furnace probably exhausts more air than it intakes, creating negative pressure in the house which will draw air in. You can try to control is by "encouraging" the makeup air to come in through a route where it hits a filter ASAP.

High efficiency furnaces have a (typically PVC) combustion air intake and exhaust and don't result in net air movement. This is in addition to the air return (entering furnace from bottom right, coming in from the top) and main supply duct (insulated thing going out the back, possibly through an heat exchanger for AC). In your case it doesn't look like there's air intake, so the furnace just ejects combustion gas out the main outlet (middle going left), and intakes air just from the stairwell. Because more air is going out the house than in, the air leaks in the house will just pull air in from outdoors.

Depending on how tightly airsealed your house is, if you're very concerned about letting in any unfiltered air from outdoors, you may try to control your input by intentionally opening a window and putting a filter right there, possibly with a fan to "encourage" makeup air to come through there instead of through unfiltered cracks in the house. In general though, the rate of negative pressure generated by combustion gases should be pretty slow, and I'd expect that just by continuously running your main fan or a few air purifiers, you'd achieve mostly the same result.

I'm also an HVAC novice, but this article is a good explanation of how air may or may not be drawn in, depending on the design of your HVAC system: https://pharoheating.com/hvac/is-it-bad-to-run-my-furnace-fan-all-the-time/

I would also recommend getting an air quality sensor (e.g. Purple Air, etc.) so that you can directly see whether wildfire smoke is coming into the house. We've been running our furnace fan (without running the heater), and noticed that it significantly increased AQI on our air quality sensor.

Not the answer you're looking for? Browse other questions tagged hvac heating furnace gas central-heating or ask your own question.

2
What is the cost of one percent efficiency on an oil heater?
0
Are my heat pumps using the right amount of power?
0
Safe to put old white paper-backed fiberglass insulation on metal ductwork?
1
Does my utility room need fresh air? If so, possible solutions?
0
Air conditioner HVAC filter size and frequency of change
3
Does my home's gas pressure need to be checked?
1
Musty smell from furnace