Battery bank in parallel/series or series/parallel

I'm trying to help some friends who live in a remote village in Africa to get the best out of their solar installation, and I'm trying to understand whether there's an optimal way of hooking up the batteries and if there are any pitfalls. 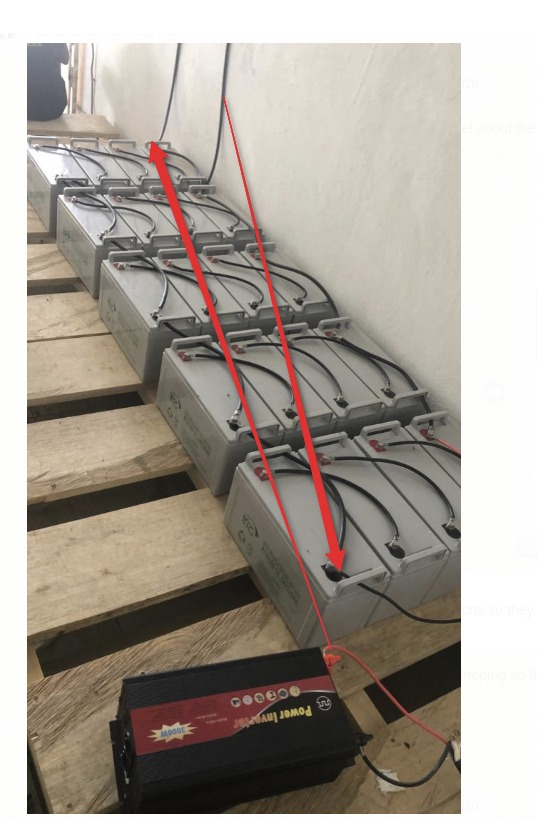 This installation has 20 batteries, each 12V 120Ah and should be combined to give 48V 600Ah and a peak load/charge of ~50A/48V. They have three groups of solar panels each having their own charge controller.

Initially I was thinking that the arrangement was of lesser importance. But then I found this article [http://www.smartgauge.co.uk/batt_con.html] explaining the importance of the details in parallel connections. This made me wonder if there is some pitfalls when you combine parallel and serial connection of batteries

In the original installation the batteries was first linked in series of 4 which then was connected in parallel. Rather than following the guidelines from the article linked above, we actually had the load and charge on opposite sides of the bank. Charge at A/B and load at C/D in this illustration, and I think this made the batteries to not charge optimally and discharge unevenly.

We got an advice of another setup which had first groups of 5 batteries in parallel and then linked, and someone rewired the setup to get this setup:

So, to my question. Is there any preferable way of connecting these batteries? Or is for instance the lengths and maybe that these should be as equal as possible?

My intuition now is to rather do it like this: parallel groups and then in series. In this setup I would try to:

Side question; is there a optimal place of connecting the wires from the charger, load and batteries? Hook both load and charge directly to the terminals?

Well, there's optimal, and there's working with what you have.

Optimal is large capacity batteries in series. Really optimal is connecting that to a charge controller that actually looks at each cell voltage individually and can adjust - those tend to be rather high-end "boat" systems in my experience, and probably unaffordable for the African bush, where I assume your friend is trying to make the best of what they have got, not spend a pile more money.

That way no parallel strings get out of whack with each other. If you have to have parallel strings, ideally you set up some way that you can (easily) isolate strings for maintenance charging to get things "back in balance." That tends to favor paralleling series strings, rather than putting parallel sets in series.

I'm not particularly expert, but I did spend a while facing the possible prospect of having to go off-grid and reading a lot of material about it, before a previous economic downturn made my local utility more cooperative about hooking me up. So I don't really have a good suggestion for your more finicky details other than to go visit a specifically off-grid forum rather than this rather generalized one. And even there opinions will vary.

Now, if they are drawing 50A for much time at all, there's an immediate problem which is that that is "12 hour" rather than "20 hour" discharge rate for a 600AH bank, and typically [lead acid] batteries will deliver less than the rated capacity at rates faster than "20" or "24 hour" rates. It's very common to overdraw and under-supply a system, and it's very expensive when you factor in killing a bunch of (relatively inexpensive) lead-acid batteries (AGM are fundamentally lead acid batteries) which are finicky and dislike not being fully charged on a regular basis, as well as being deeply discharged at all.

These days there are relatively expensive lithium batteries which are far more tolerant of partial charging, but again, I assume "working with what they've got."

...and, even out in unregulated lands, some sort of overcurrent protection (usually fuses) is a good idea on a big honking battery bank that will melt a wrench if you drop it in the wrong position. Typically one per series string (and that way they don't have to be rated for the full capacity of the bank.) Having that much unfused power can get very messy very quickly, and I'll bet the fire department is rather limited, if at all.

Your reference link is one I had found some years ago when working on a couple of EVs with similarly linked batteries. The foundation of the reference is sound, in that you want to have uniform cable lengths (presuming identical gauge cables) from the terminals to the load (or charger).

As such, you now have the configuration options shown in the link, but the conclusion to that document is that the last configuration is the best for load and charge. The documentation states that each current path is via one short and one long cable, consistent across all "sub-circuits."

As noted in the linked document, the diagrams represent optimum connections for four batteries in parallel. I'd suggest that diagram three would work for five or more batteries, but you'd want to have the long legs to be of greater diameter cable for less loss of the higher currents available from the combined batteries in parallel.

Not the answer you're looking for? Browse other questions tagged solar battery or ask your own question.

3
Solar backup system, advice needed
1
Is Having Multiple Charge Controllers on a single 48V System/Battery Bank a “Bad Idea”?
2
Charging a battery with a solar panel
0
How big of a Battery Backup or powerwall do i need to power 3 medical devices
1
How should I connect my solar panels to each controller for optimal performance (series or parallel) without buying new charge controller?
1
Proper amount of solar panels needed to charge batteries