I have a toilet tank that's slowly leaking into the bowl causing it to refill periodically. I can rule out the fill valve having loose grit/obstructions causing it to fill slowly after it should have shut off.

The leak has to be one or more of the following:

Here's a photograph of the tank: 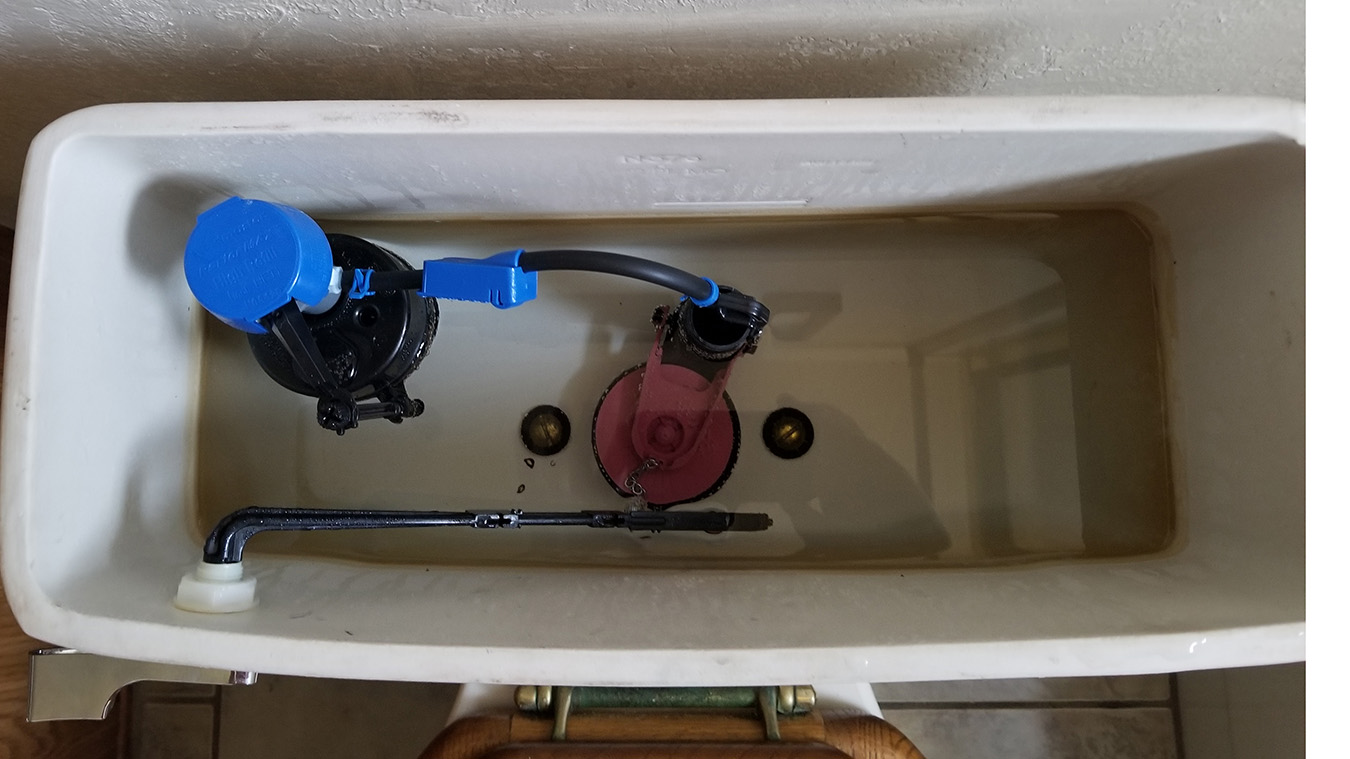 I don't know if the flapper is leaking or one of the bolts or flush valve gasket. I was pretty sure that I had a waterproof seal on the bolts and flush valve because before I remounted the tank to the bowl I filled the tank with enough water to see if it any of those were leaking. (It leaked a bit at the flush nut before I carefully tightened the flush valve nut a quarter turn beyond hand-tight).

If the problem is with the flapper I probably won't need to pull the tank back off to fix. Otherwise I'm doomed to that again.

I've thought that if I tested the tank by filling with just enough water to cover the bolt heads/portion of flush valve below the flapper, I could see if it leaked. If not, then it would probably be the flapper.

Any other idea to figure out where the leak is without pulling the tank? Putting a dye in the tank won't help because the two bolt connections as well as the flush valve all drain into the bowl flange, so I'd see the leak as color in the bowl in any case.

EDIT: I wanted to add some information and correct some of my misunderstandings in the question I'd posted. Also, I think I have the fix for my case and will try to post a separate solution.

I think the toilet bowl I have is pretty typical. Here's what the tank connects to: 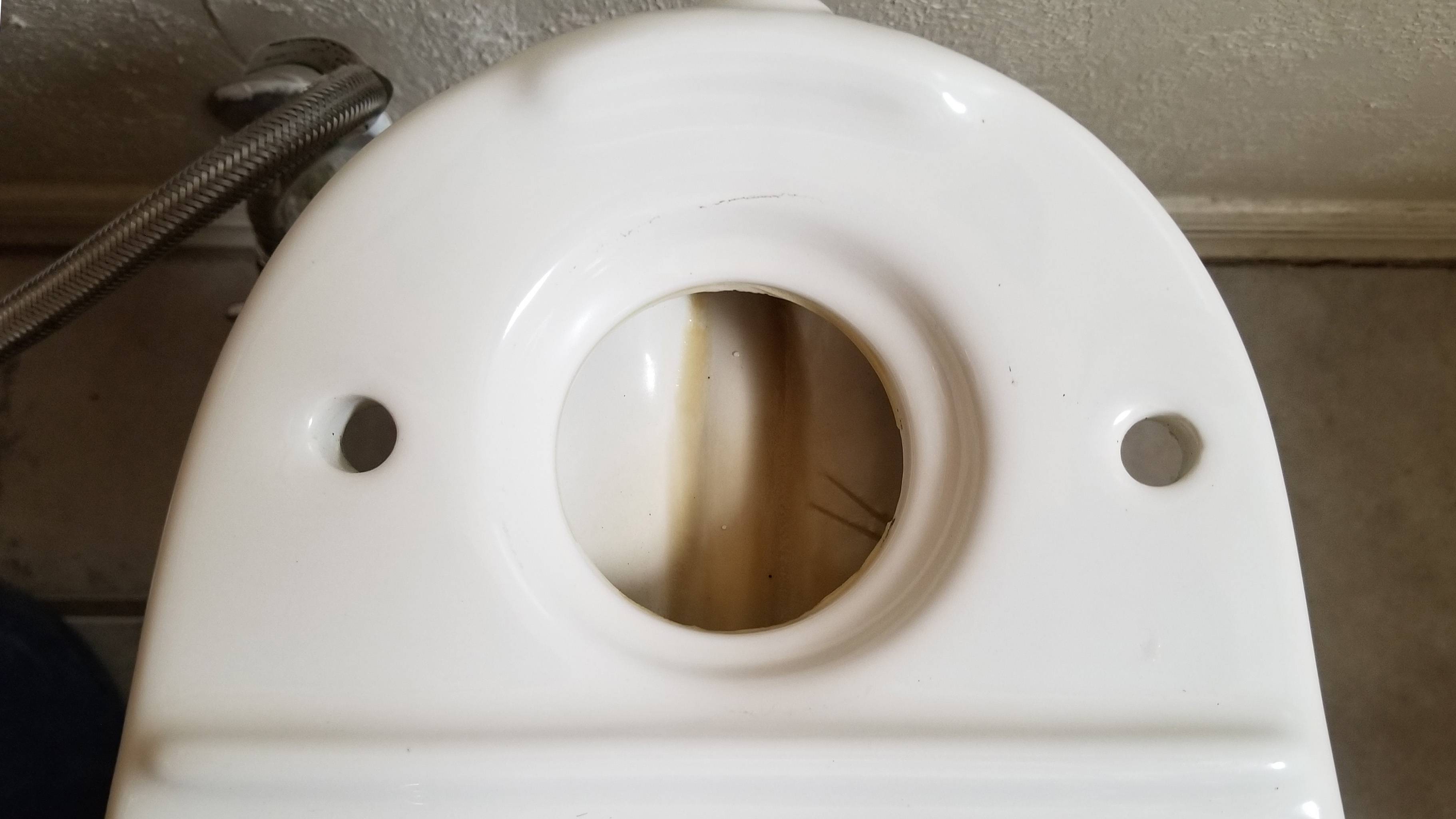 My belief that a leak in either bolt connection would leak into the larger hole and end up in the bowl is incorrect, especially with the gasket covering the flush valve nut. It is the case that correcting a leak from the bolts or the flush valve hole involves removing the tank.

I thought it was being smart when I had tested the tank with its new valves for leaks before reinstalling it on the bowl. What I didn't realize is that I did it wrong. The amount of water I used for the test (just covering the bolt holes) didn't cause enough pressure to test that the flush valve didn't leak. Later, testing with water up to the water line in the tank caused significant leakage around the flush valve.

An additional note is that I'd done a recent overhaul of the tank, both the fill and flush valves (using a kit containing both parts). So the tightening of the flush valve nut was something I'd done recently and not from the previous setup.

If the leak is only from the tank to the bowl, and not on the floor, then the only option of the three you listed that can be the cause is the flapper.

Judging from the photo your flapper can be replaced without any disassembling of the tank.

There are two flexible tabs on the back of the flapper that go over two fixed pins on the bottom or the overflow pipe. You can reach down and pull the tabs off of the pins, and reverse the process to install the new one. Very easy.

There are two size's of flappers, 2" and 3". You can shut of the water supply valve and remove your old one and take it to the store to match if you are unsure of the correct size.

What seems to have fixed the slow leak into the bowl is painfully simple:

Here's a picture of the bottom of the tank with the flush valve installed: 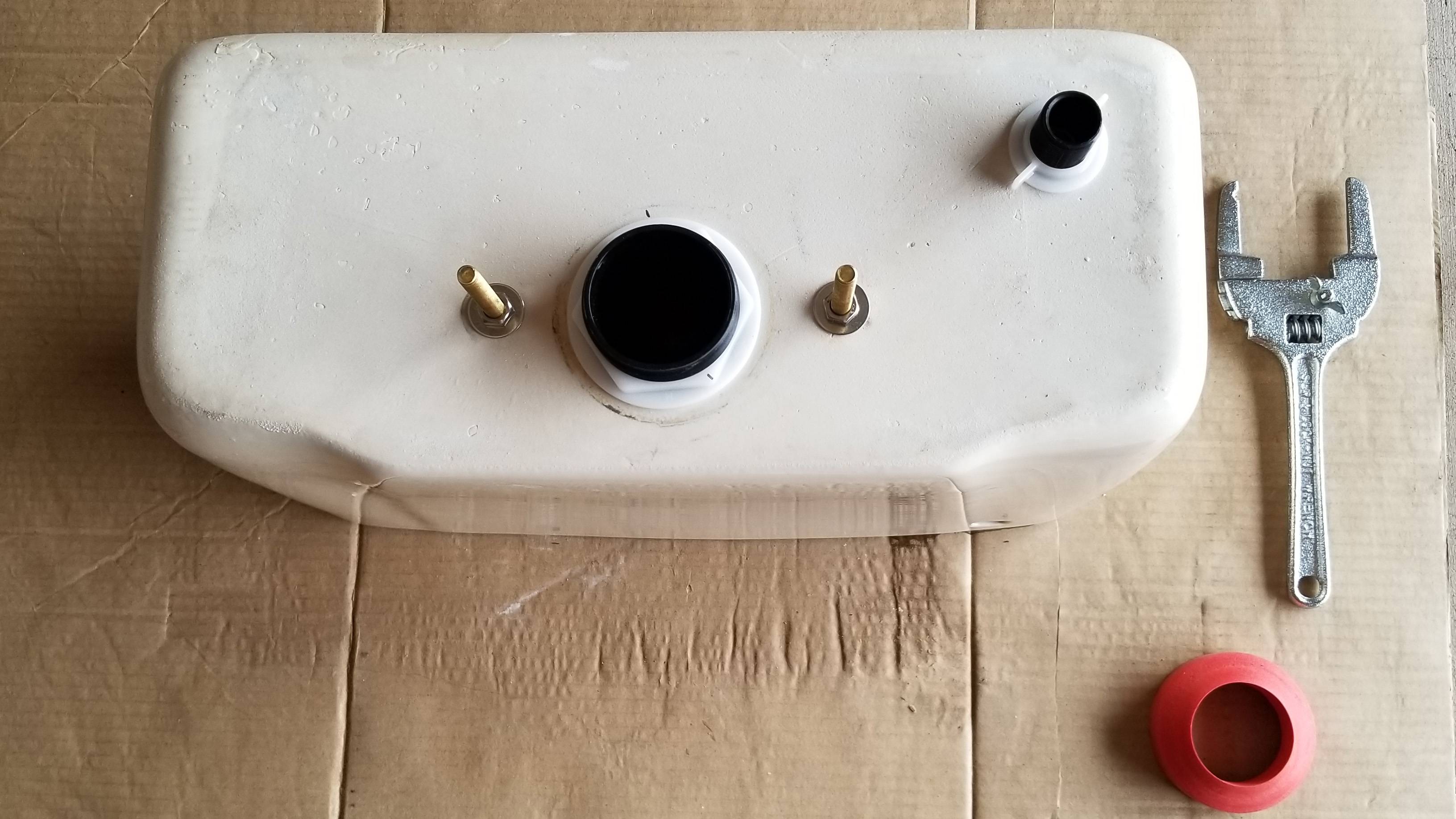 The instructions that came with the flush kit I bought suggest you tighten the flush valve nut (only) hand tight and warn about tank cracks if overtightened: 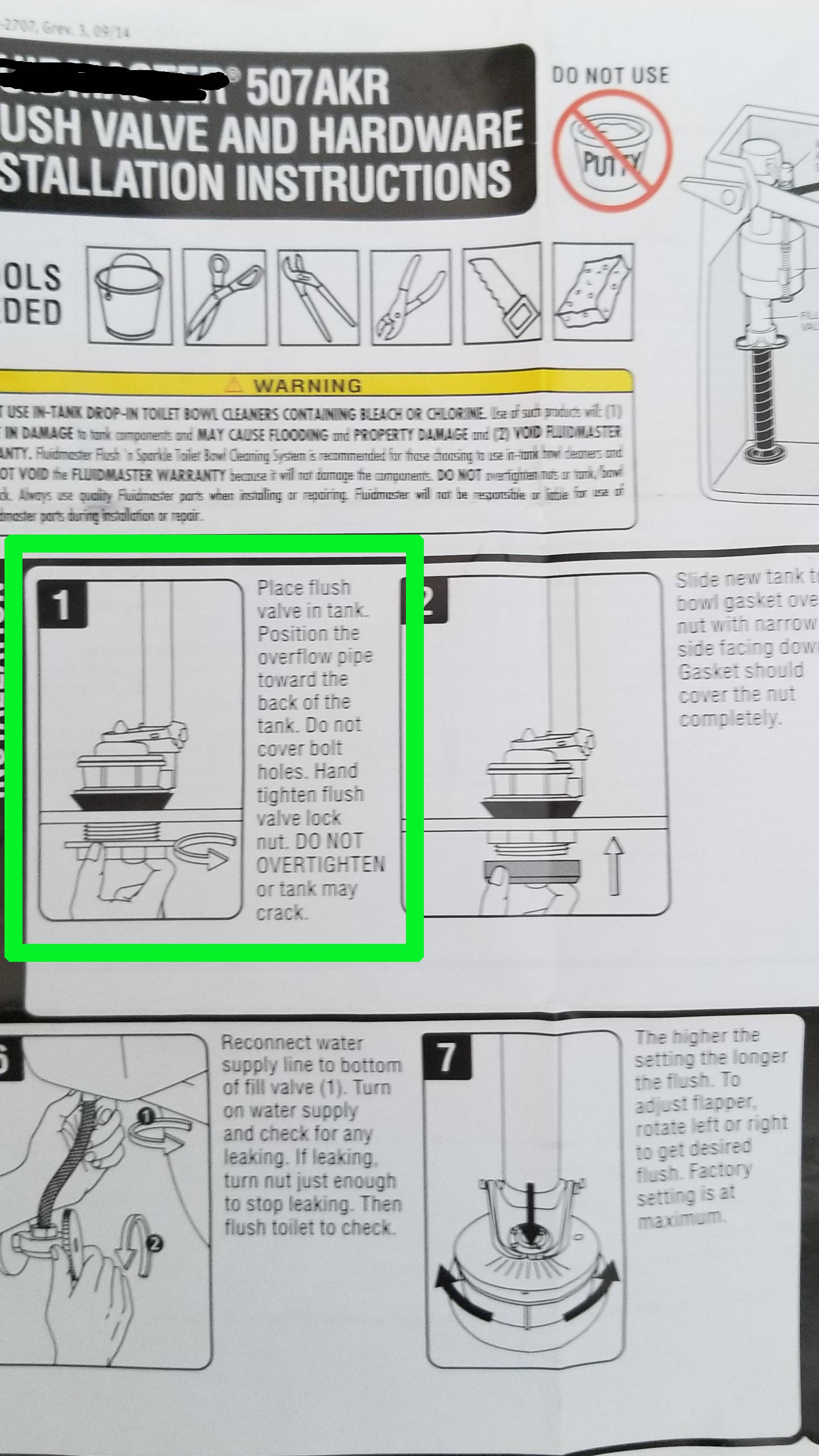 I put a tiny tick mark on the bowl to indicate where "hand tight" was at. In my original test of the tank I'd only filled the tank an inch or so with water, and my hand tight valve was waterproof. As it turns out later, adding water to the normal fill line caused a large amount of water to leak.

What ended up working for me was to use adjustable slip lock nut wrench shown in the image above. Alternative tools for tightening the nut, such as channel locks, would tighten it as well. In order to stop the leaking flush valve, I had to turn the plastic nut carefully past hand tight to the small tick on the nut (almost a half turn). The danger is to torque the wrench too much and to crack the porcelain of the tank. It's something I'm sure a plumber would master, but if you're a newbie like me, getting just the right tightness is tricky sometimes.

Anyway, that appears to have stopped the slow leak. I'd still wanted to test the tank before installing it on the bowl, so I put it up on a few scrap 2x4s and filled the water up to the normal water line. No drips: 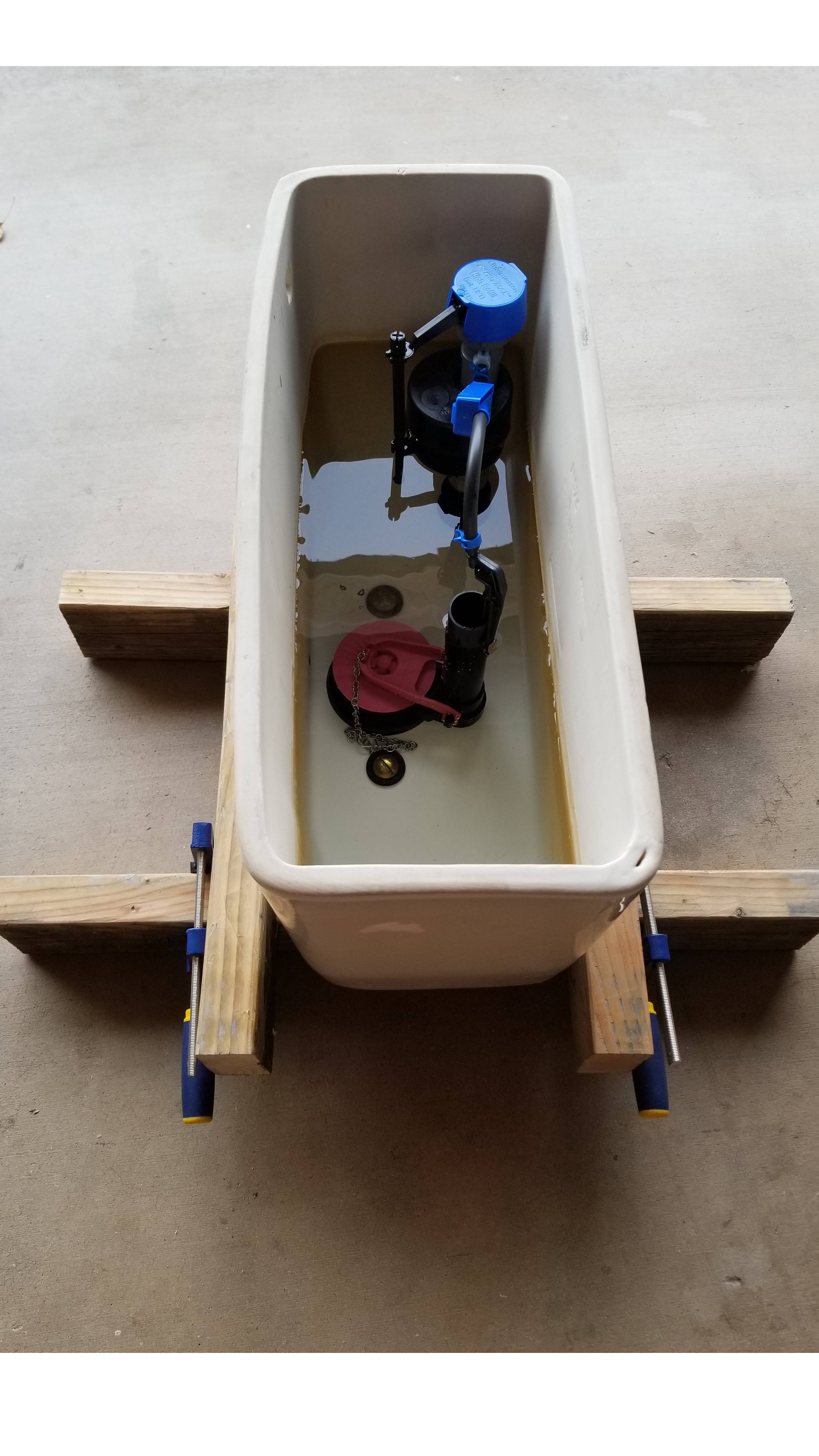 I know the whole process shouldn't have been so difficult, but I thought I'd done it right the first time and as it turns out I was too wimpy! Hope this helps someone.

Not the answer you're looking for? Browse other questions tagged toilet leak or ask your own question.

5
Why does this toilet fill valve leak around the top?
0
What would cause a toilet tank to intermittently leak into the bowl only when half-full or more, even after a flush valve replacement?
1
Toilet Tank slow leak, have all new parts, tried all troubleshooting...help!
2
Fixing a toilet deceptively complicated, where did I go wrong?
1
Small trickle into toilet bowl, flap and valve seem fine
0
Toilet tank fills after Shutoff valve is off and FluidMaster fill valve also is off
0
Toilet constantly making a noise
0
Toilet tank leaking on the floor after removing and reinserting flush valve
0
Kohler k620 tank - which Tank-To-Bowl Connector Kit?