Q: Is an outlet above the HVAC air return considered within the environmental air space?

We need to move the HVAC air return in one of our rooms, and there is an existing electrical outlet in the most convenient spot. Rather than remove the electrical outlet, I was thinking about just moving it up a foot or so to make room for the new air return grill, as shown here: 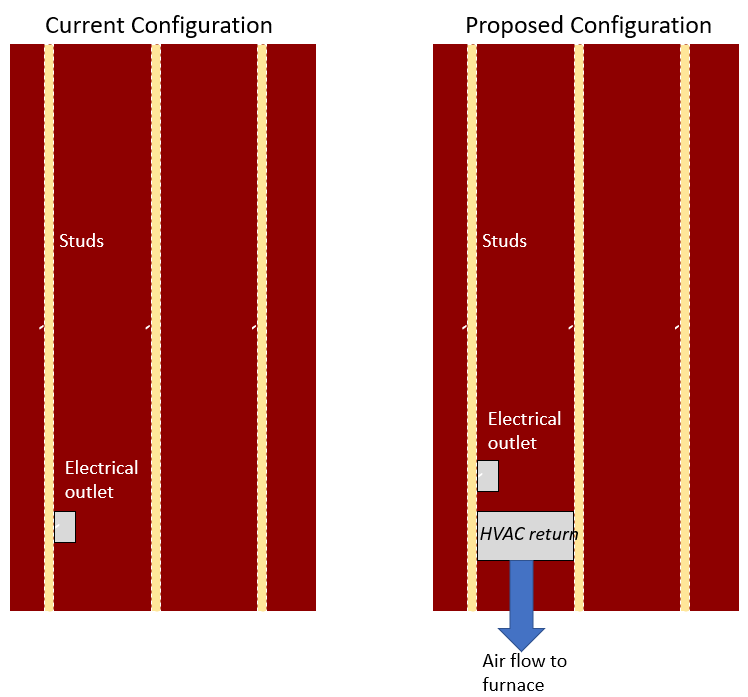 My understanding based on NEC is that the space between the studs through which the air will be flowing from the grill to the furnace is covered by 300.22(C) "Other Space Used for Environmental Air". What I can't figure out is whether the same rules apply if the outlet is located above the HVAC air return. Theoretically, the air flow would be downward from the grill, so it would not flow past the outlet; however, there is no barrier within the space between the studs to separate the outlet from the HVAC air flow.

Clarifying Edit: The return air is not enclosed in a duct; this is an old (1920s) house, and it just uses the stud bays for the air return.

the only way around this Is to enclose the wiring or isolate from the environmental air source OR use plenum rated cables.

In your case if I understand it correctly the vent would be above the receptacle but in the same air space no isolation.

A electrical fire in this case could spread more easily without plenum rated cables and the toxicity, burn rate of standard cables vs plenum rated is the reason air spaces need to be isolated or plenum cable’s used.

Just add fire blocking above the air return and below the receptacle.

Now they are separate spaces.

Not the answer you're looking for? Browse other questions tagged electrical wiring hvac central-air or ask your own question.

22
Is running ethernet cable through an air return allowed under US code?
6
Is it safe to install a sconce light box inside a return air space?
0
Can I remove the top plate at top of an interior NLB wall?
2
Help running romex and conduit for new outlet through cold air return
0
Electrical: Wall Outlet Requirements
0
Can a HVAC be split between bonus room and garage, but with return and Tstat in bonus room?
0
How big of a duct and grill do I need for a central cold air return on a 3 ton system?