How to repair holes in wall and properly mount a clothes pole?

We just moved into our house and tried hanging up my wife's winter clothes. Once we had both sides of the racks filled up the whole thing fell down. We had a handy man come out, and we figured out there isn't a stud where the middle bracket is. He tried to repair the piece to wall (originally supported with 15+ nails) however it would not support it. He was able to get it up back up with two silver anchors that you can see in the picture stating not to hang heavy stuff anymore.

Today we tried just hanging up lighter clothes today (athletic wear) and the anchors came out of the wall. I am frustrated now because we want to hang up our cloths on the top racks because of the ample amount of space, but we are unable to do so due to the fear of it collapsing. Does anyone know of a way to possibly fix this? 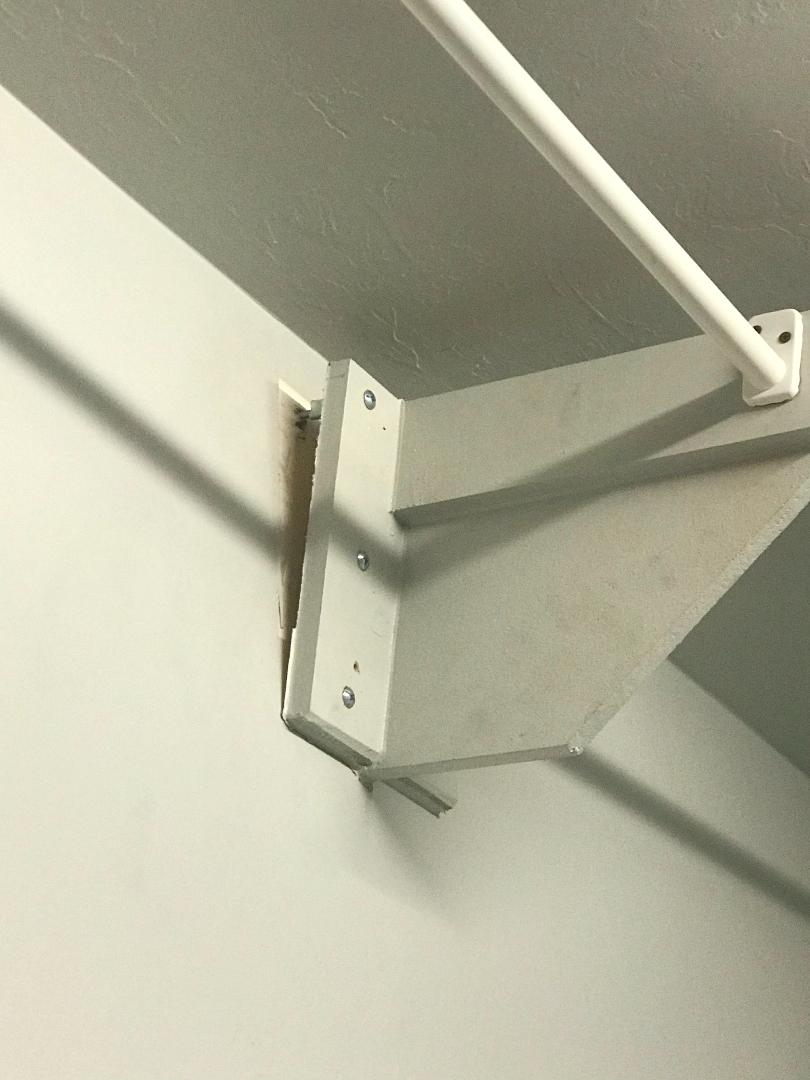 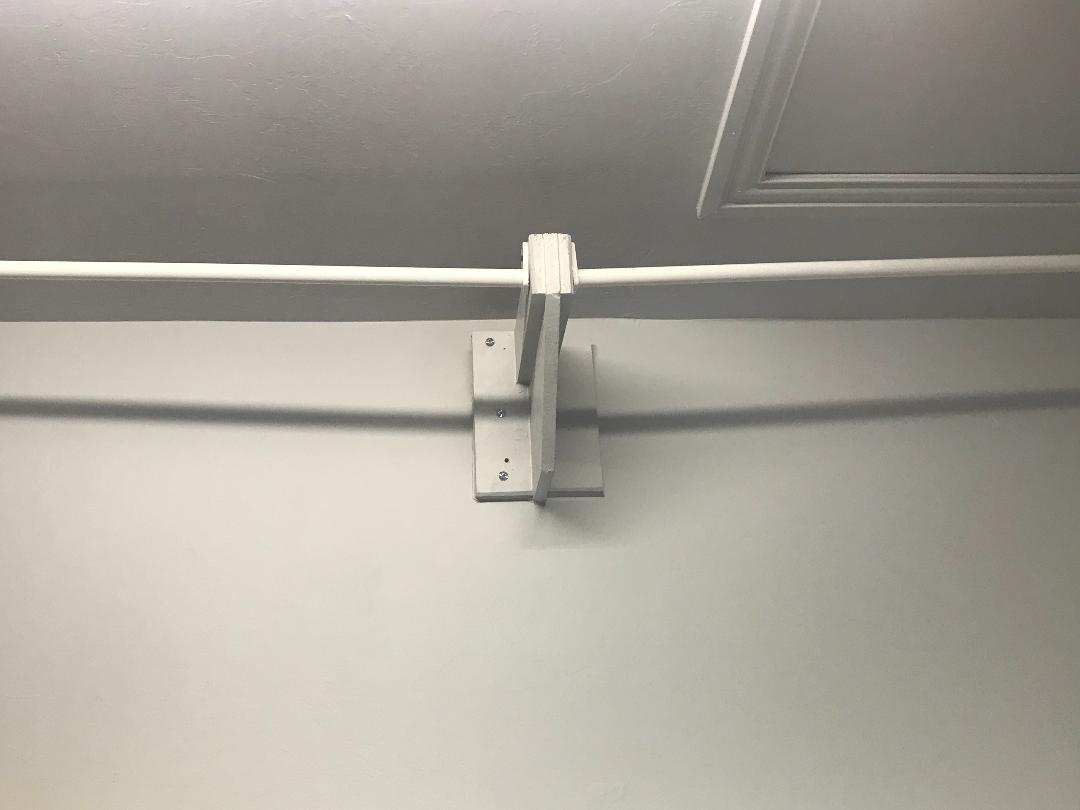 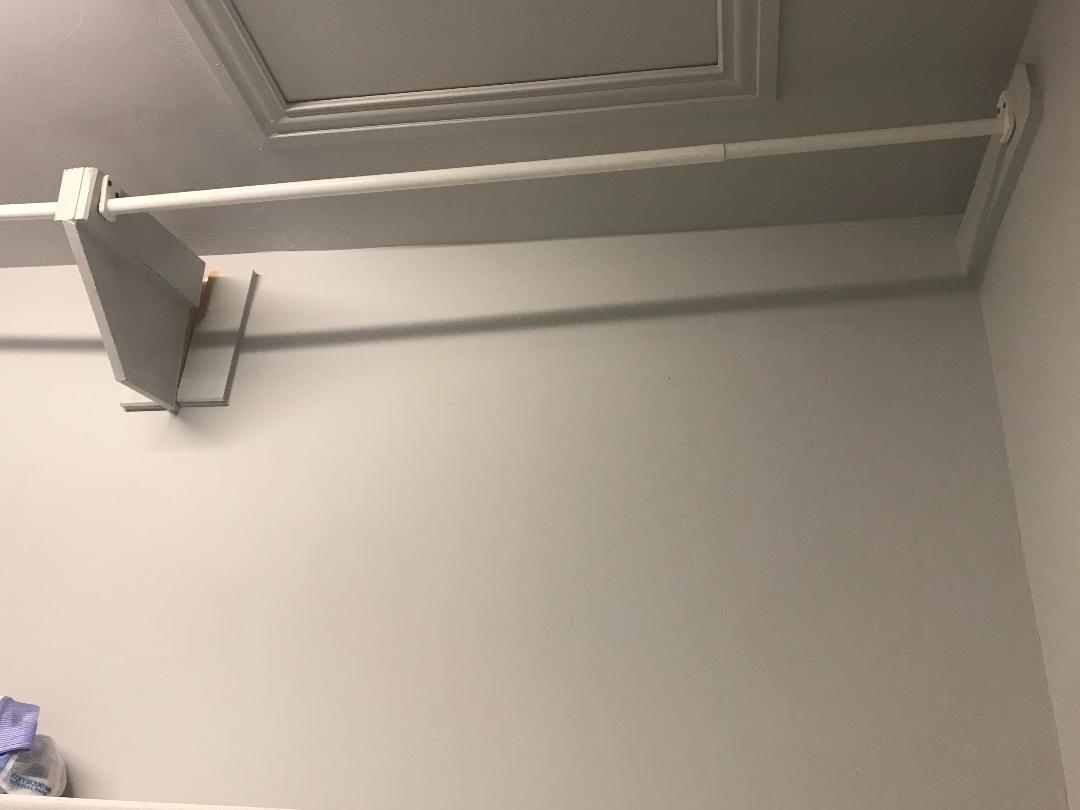 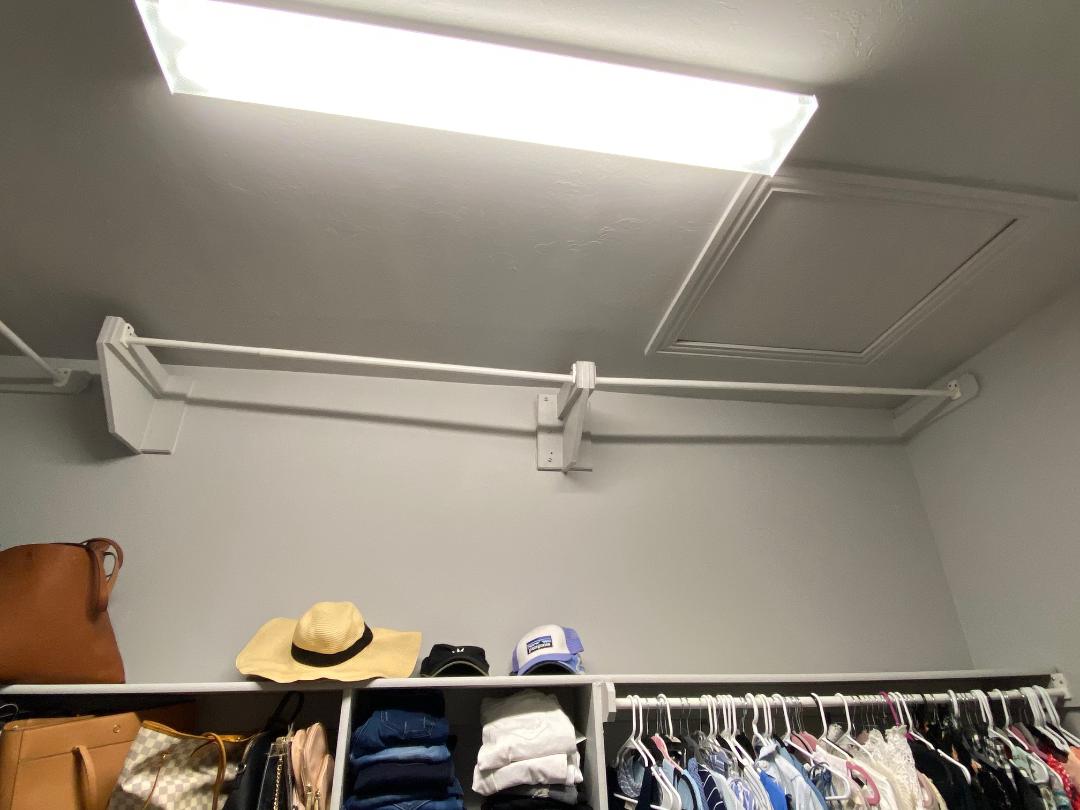 Jack is right. Take down the old mounting piece. Buy a new longer piece of plywood that will extend over to the nearest studs. You can take the old wood piece into the store to use for color matching a pint of paint. You could paint it outside before attaching it to the wall.

Then center the new piece along the wall for aesthetics and use heavy screws to screw it into the studs. This would hide the old torn out drywall holes. You can then mount the old hardware with L brackets.

Alternatively, you could try to mount a taller piece of wood that extends up to the ceiling and screw diagonally up to the wall's frame.

Just a thought... You might be able to see the studs from above. I see the attic access right there.

First off, remove the rods from the broken piece and remove it from the wall. Knock those two pieces going into the wall off. Now find the studs. Get a small screwdriver and start poking holes every 1/2" from where the existing hole are until you hit a stud. Then poke a few more holes so you know exactly where the stud edges are on each side of where your bracket will go. Then go to your home store and get a piece of wood the height of your bracket and a length equal to the distance to the two studs you located and 1/2" thick. Add a couple extra inches to the length. Screw the wood into the studs and then secure your bracket to the wood with "L" brackets or a few 2"x 2" positioned in the corners and screwed into the wood piece and the bracket. Screw your rods back in and you should be good. You can cut the extra 1/2" off the edge of the bracket since it won't be up against the wall but against the new wood.

Other answers suggest putting a piece of board across the wall, attaching it to the studs, then attaching this hanger to that. There's nothing wrong with that at all, but I thought I'd make another couple of suggestions:

It's hard to tell for sure, but it appears that the "center" hanger for the upper bar is directly above the hanging bar support for the lower bar, and that this support is held up by a board that appears to run all the way to the floor.

If that's the case, replace the short vertical support for this center hanger with a longer one that rests directly on top of the one below it. You can hold it in place by putting a couple of shorter pieces of wood on either side, making a sandwich much like the current hanger, then screwing up from underneath the shelf into these side boards while the center board remains centered directly over the one beneath.

This will transfer the vast majority of the weight of hanging clothes to the board below and then to the floor. The only need for the screws at the bar level will be to keep the bar from tipping away from the wall, not supporting weight. This will put much less stress on these screws and a couple of decent drywall toggles will be more than sufficient to hold them to the wall.

The hanger bars appear to be adjustable width. Find a stud (if this is in the US, there will be one every 16" along that wall, possibly as much as 24" apart, but most likely 16" - similar spacing for most other countries).

Move that center anchor to the stud. Then using the adjustment available in the bars have 2 bars of unequal length, but the same total overall length. This will provide the strength of having the center support attached to something structural. (You may need to be aware of the extra length of one bar and put lighter clothes on that one and the heavier stuff on the shorter bar to prevent reduce bowing of the longer bar.)

While you're at it (and especially if you move the center support to the right to the nearest stud), confirm that the left-hand support is actually attached to a stud as well. If it's not, now is the time to move it to a stud, instead of waiting for it to rip out of the drywall leaving a big hole to patch instead of a couple of small screw holes.

I'd be removing the flaky hardware and wooden structures, installing three or four standard pole brackets (on studs, of course, with no span more than 32"), and dropping in a new full-length pole. Done. No hokey boards to fit and paint or other nonsense. A homeowner should own a stud finder, so get one if you don't already. 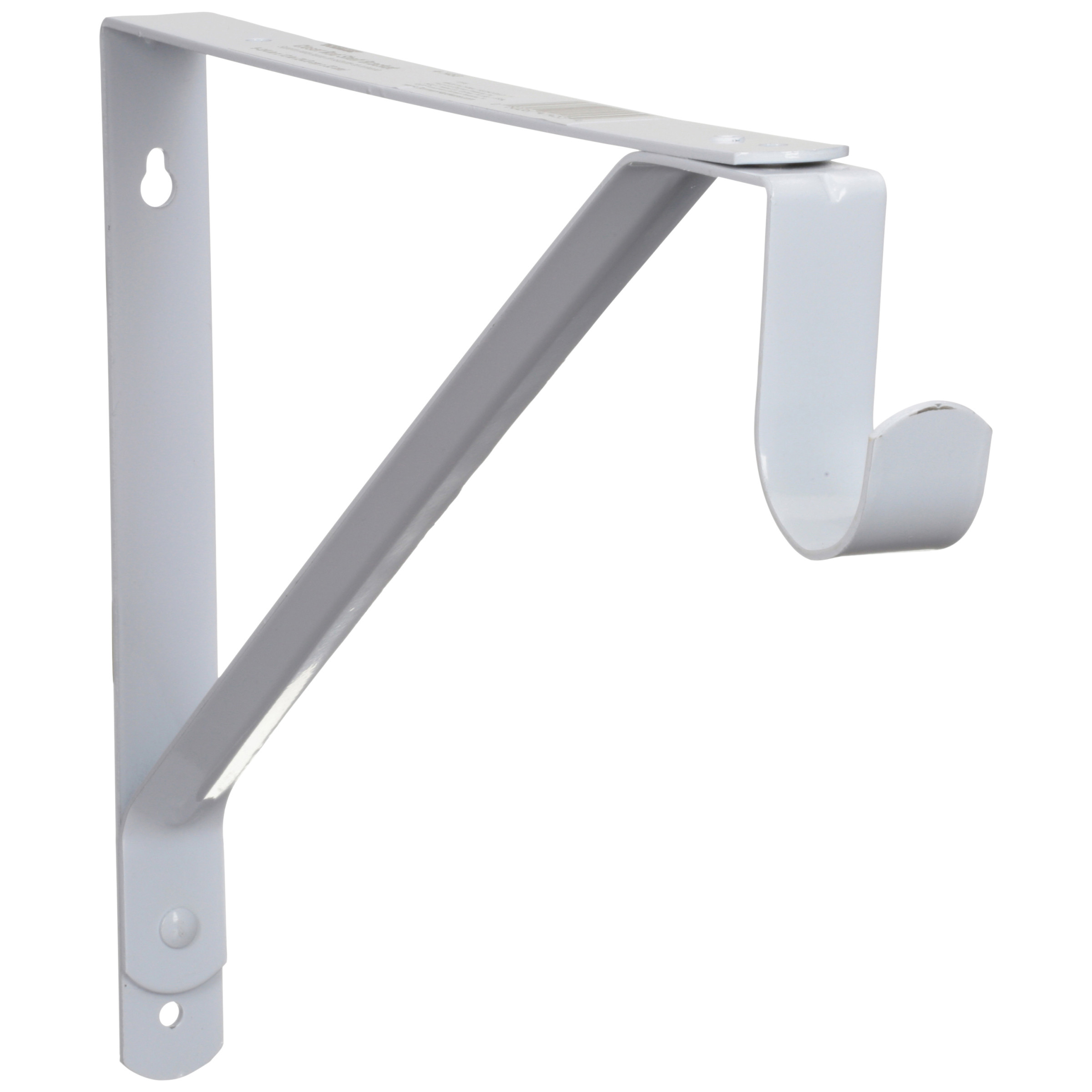 That middle bracket has split into two pieces, evidence that it wasn't constructed correctly. a proper fix will involve replacing it with a bracket that is structurally sound. I'm not going to discus that further,

Here's a dodgy way to repair it.

Drill a small hole in the ceiling above the rail, if you find wood screw in a screw eye and tie the rail to that,

If you find air get a 3' long stick (2x4, broom handle, pallet slat, whatever) and go up through that manhole and place the stick on two beams so that it crosses the hole tie a string or wire round the stick and pass it back down through the hole, nail the stick to the beams, tie the rail to the wire.

And a slightly less dodgy way

to reattach the loose half of that bracket. Get a 6 inch long screw (you may need to visit a screw specialist to buy this) and screw upwards at a 45 degree angle through the top hole of the bracket. the screw will eventually reach the top plate of the wall which will be strong enough to support the bracket,

Not the answer you're looking for? Browse other questions tagged drywall walls screws studs hanging or ask your own question.

7
How do I repair screw holes in a brick wall?
3
How do I hang curtain rods?
8
Can I wall-mount a TV when there is an air gap between the drywall and the wooden stud?
2
Can I attach a television mount using custom drilled holes?
1
How can I hang a wall mount on misaligned studs?
0
TV wall mount ripped out, repair help please
3
How to repair anchor holes and re-mount bathroom tissue dispenser
2
How to mount a white board on a wall without making holes in the wall?
0
How can I repair my wall where the paint around screw holes has torn away?