My back patio is made from closely placed paver bricks. Weeds and moss grow up from between the cracks. I've pressure washed the whole area off, removed all of the moss, and pulled out all of the weeds.

Should I replace the original paver sand that was between the bricks or try to use polymeric sand? I'm worried that, with closely placed bricks, I won't be able to get the polymeric sand down into the cracks.

It rains a lot here, BTW. 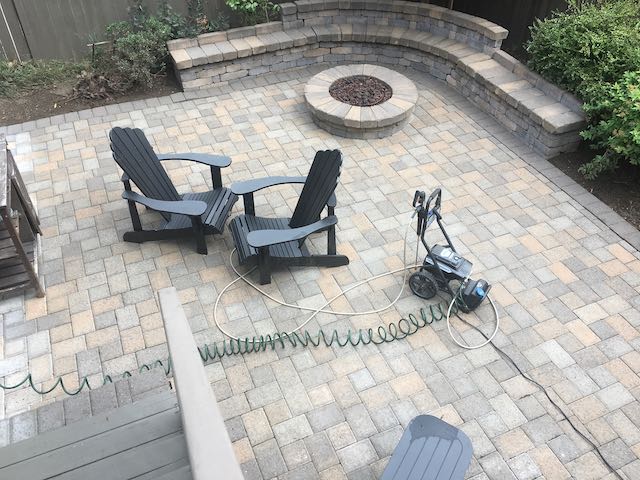 I agree with Matthew; this looks like a pretty good paver job. Pressure washing probably did a good enough job, depending on how long it has gone from either being built or from the last time it was cleaned, til the next time it needs cleaning.

However, if you've got weeds coming up (the moss, by contrast, is probably growing downward from transplanted seeds rather than growing up from underneath the pavers), it could be that there wasn't a proper base layer or weed barrier put down. Or, this could just be an old patio; no weed barrier lasts forever,

I would recommend polymeric sand over normal leveling sand simply because polymeric sand is designed to go between the cracks of the pavers and then harden, which has two benefits:

When applying the polymeric sand, it is important to use a tamper or vibrating compactor so that the polymeric sand settles down fully into the cracks; you don't want air pockets in it when it is setting. After that, be sure to wet the sand per any provided instructions and let it set before walking around on it.

Also note that polymeric sand is recommended to be reapplied in a touch-up capacity every year or so.

Not the answer you're looking for? Browse other questions tagged repair deck outdoor patio stone or ask your own question.

4
How do I safely clean my paver stone driveway?
4
Does polymeric sand make patio repairs impossible?
1
Questions about base under paver stones for a patio
2
Why is the water dripping from my patio furniture removing the sand from the joints between bricks?
2
What type of substrate should I use to install pavers over an existing poured slab patio
1
Leave Polymeric Sand Until Tomorrow?
1
Should I avoid working on my newly installed patio stones?