How should I deal with a cable found underground on my property?

I was digging in my garden and I found a wire coming through my garden underground. It looks old and dead, and I would like to take it off the ground, but the problem is that both ends lead somewhere outside my garden, so I don't really know where it ends or starts.

I called the TV providers and no one seems to know anything about it. Ex owner of my property is dead. As I found out by asking neighbors, some time ago (~50 years ago) this property (now mine) was bigger and included a shack and a well on it. This cable was used to provide electricity to both. Now there's a new house in that place and I don't know what's happened to the cable part which is under this house's property. They said, the cable comes from our house, so I'll try to get to the basement and check if I see it there.

It looks dead to me because I used a cable locator to check if it sees anything - and it doesn't. I'm not sure if it's a valid test in this case, though

It seems that I actually cut it a bit accidentally while digging. I found the cuts and I see the copper wires inside, as can be seen on the last photo. It looks 100% like the electric cable.

I believe it's not very safe to just cut it at both ends? I called the local electric provider, but they told me they didn't have anything in there. Any ideas on how to handle it? 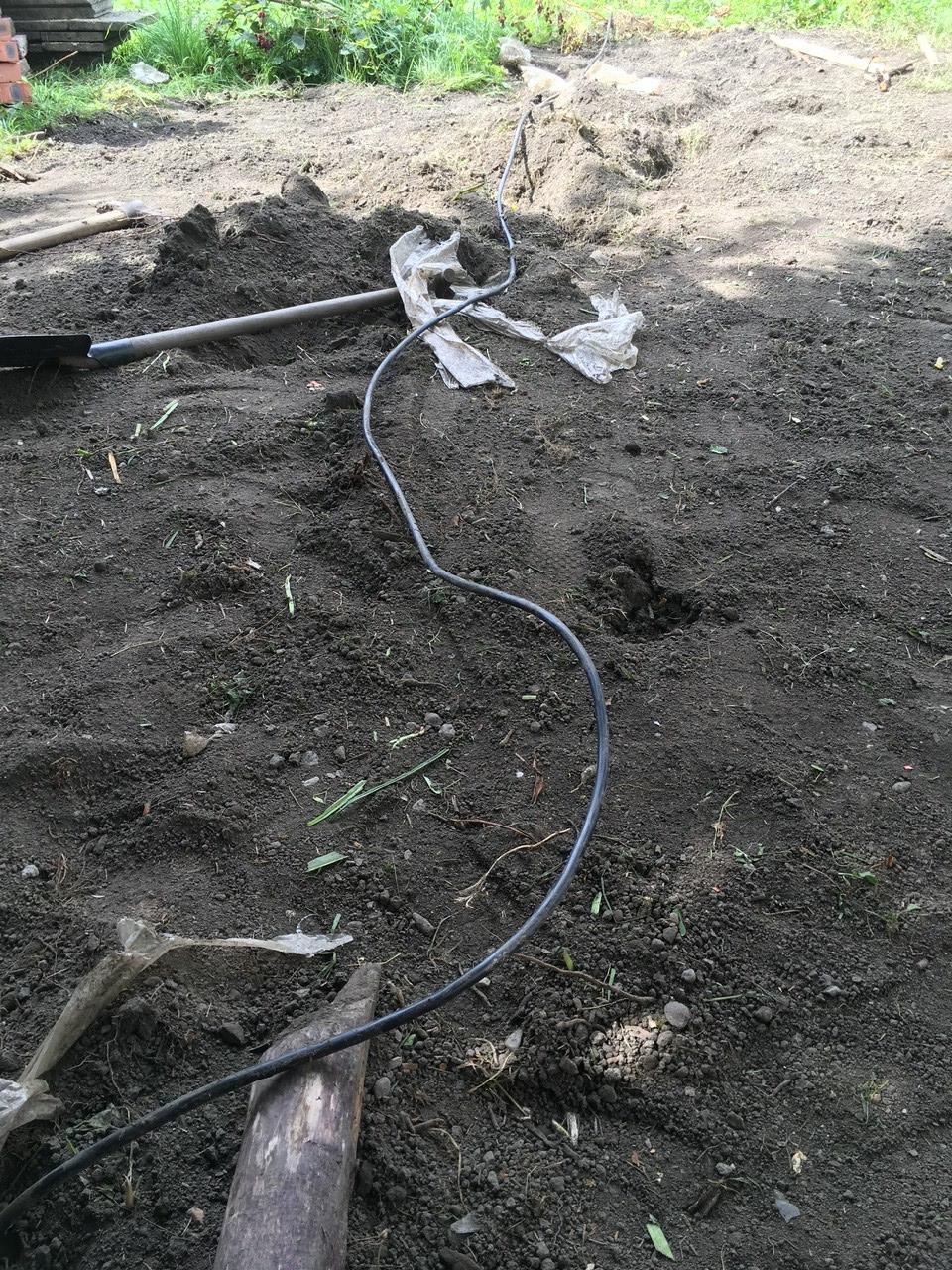 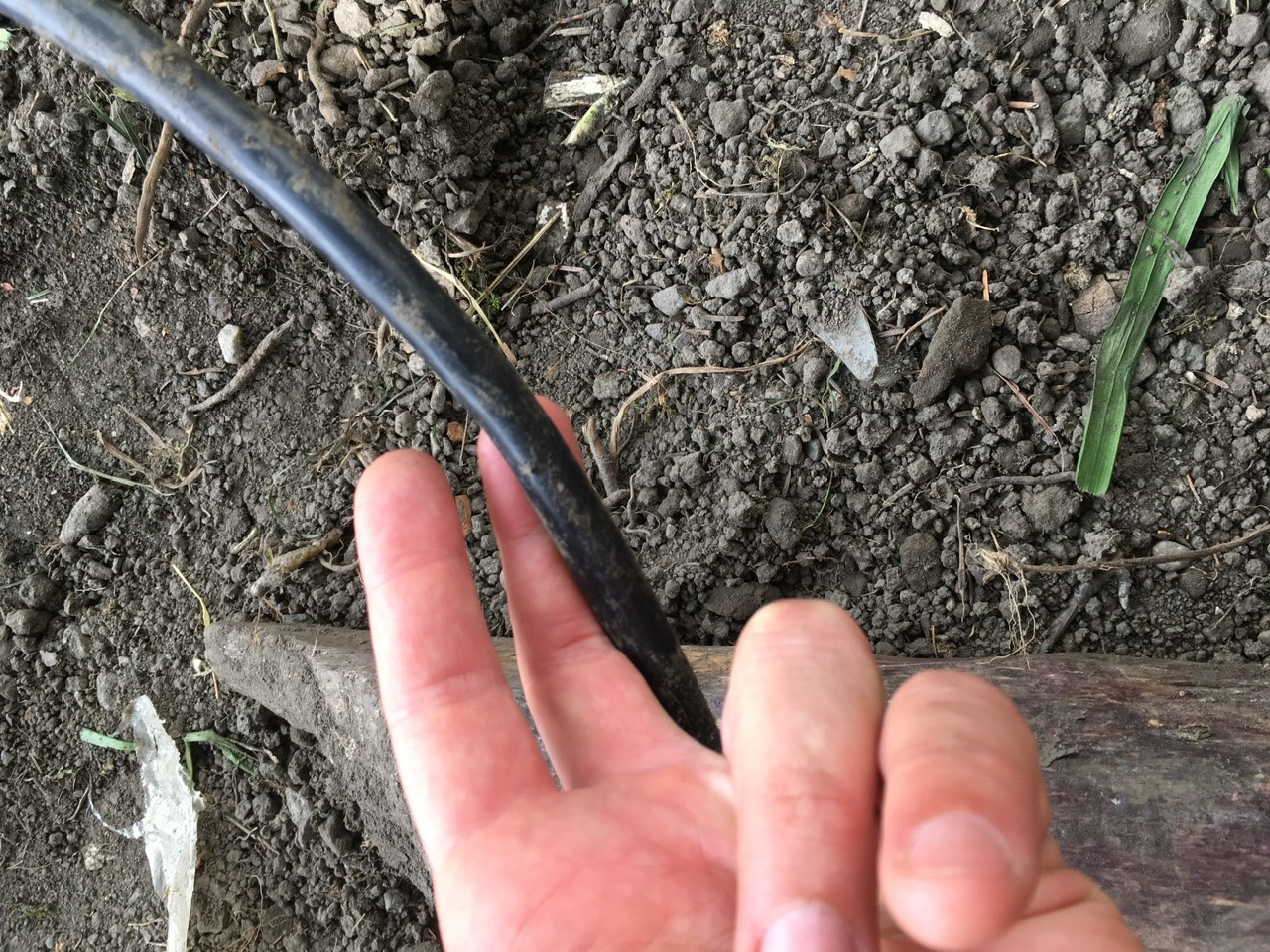 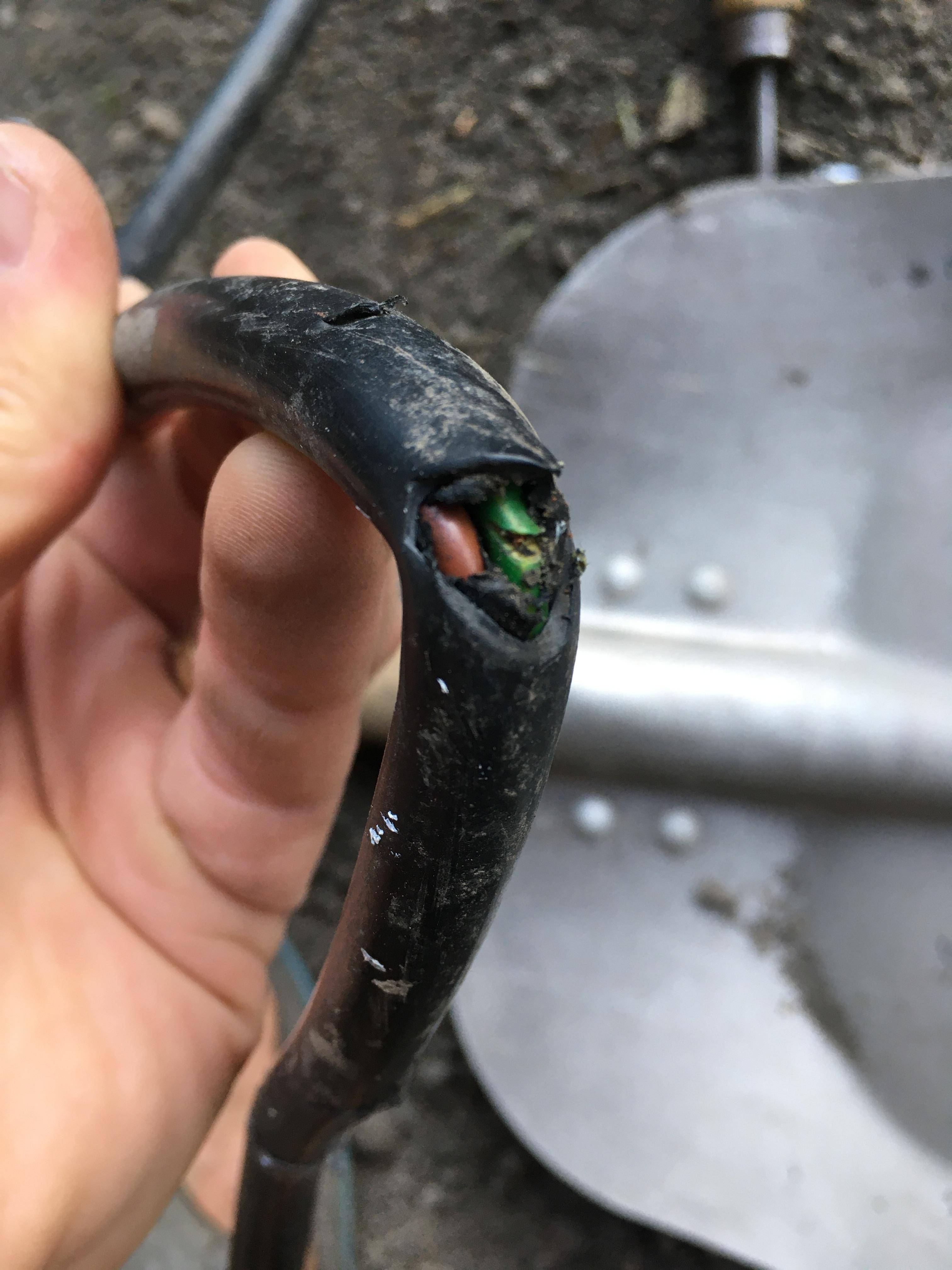 The images show a cable similar to a spool I have of "cable-in-conduit" which is used for cable television service. Typical cable television cable drops, from the service point (tap) to the house can be 6 mm diameter, but the c-in-c will be slightly larger. It's hard to tell from the image, but even if it's direct-bury drop cable, it's not dangerous.

Are you able to view a service point for local cable tv service in either direction?

Cable television drops are buried less than 30 cm deep in many cases and are easily cut by accident. Cable in conduit ostensibly protects the cable, but a sharp shovel and a determined gardener can certainly cause damage.

Consider to contact your local cable television provider with the same query you've posed to the power company.

Allowing for your edit, determining that it is a power cable of some sort, you can check for active current with an ordinary compass, the magnetic type, not the circle drawing type. According to one web site, for alternating current, the needle will vibrate at the frequency of the electricity, likely 50 Hz in your country. If it is direct current, the needle will point in one direction as you move it about the wire.

A more expensive method is to use a clamp-on ammeter, if one is available. That is sometimes inconclusive as it often requires to separate the conductors to ensure an accurate reading.

It looks like a direct-burial RG6 coax cable. Call your local utility locating service and have them mark your property to see if the line is in use.

Cut it without calling and you risk knocking out cable television and internet service to your neighborhood, your own home included, and you may face fines digging without having your property marked.

In addition to the great answers already given, another possibility is that it is a "locator wire" buried above a plastic pipe.

Last summer I worked with a crew digging on a property where some of the sprinkler pipes had such wires and other pipes did not. The crew ended up breaking one pipe that didn't have a wire above it, but managed to avoid a pipe that did have a wire.

Is it possible you have an automatic irrigation system? It also looks like standard irrigation/sprinkler wire that goes from the controller to a valve.

Not the answer you're looking for? Browse other questions tagged electrical wiring czech-republic or ask your own question.

13
How to detect whether there is a signal on TV cable
1
Can I install a new outlet here?
2
Is the PF error on my microwave caused by the home or electric company?
4
Why is my electric fence killing birds?
0
How to test grounding in AC outlets?
3
Identifying Knob-and-Tube
0
Sprinkler System Wire cut accidentally
2
What is this type of garden appliance power socket?
0
Electric Light Switch Box Screw Hole Cracked