Is it normal to use a grinder to finish a new driveway?

Yesterday we had new concrete pads poured. We expected pour-day to be the last day. I saw them out there finishing, but when we went out that evening after everyone had left, it looked half done. There were unfinished areas, dips in the concrete, and piles of stuff: 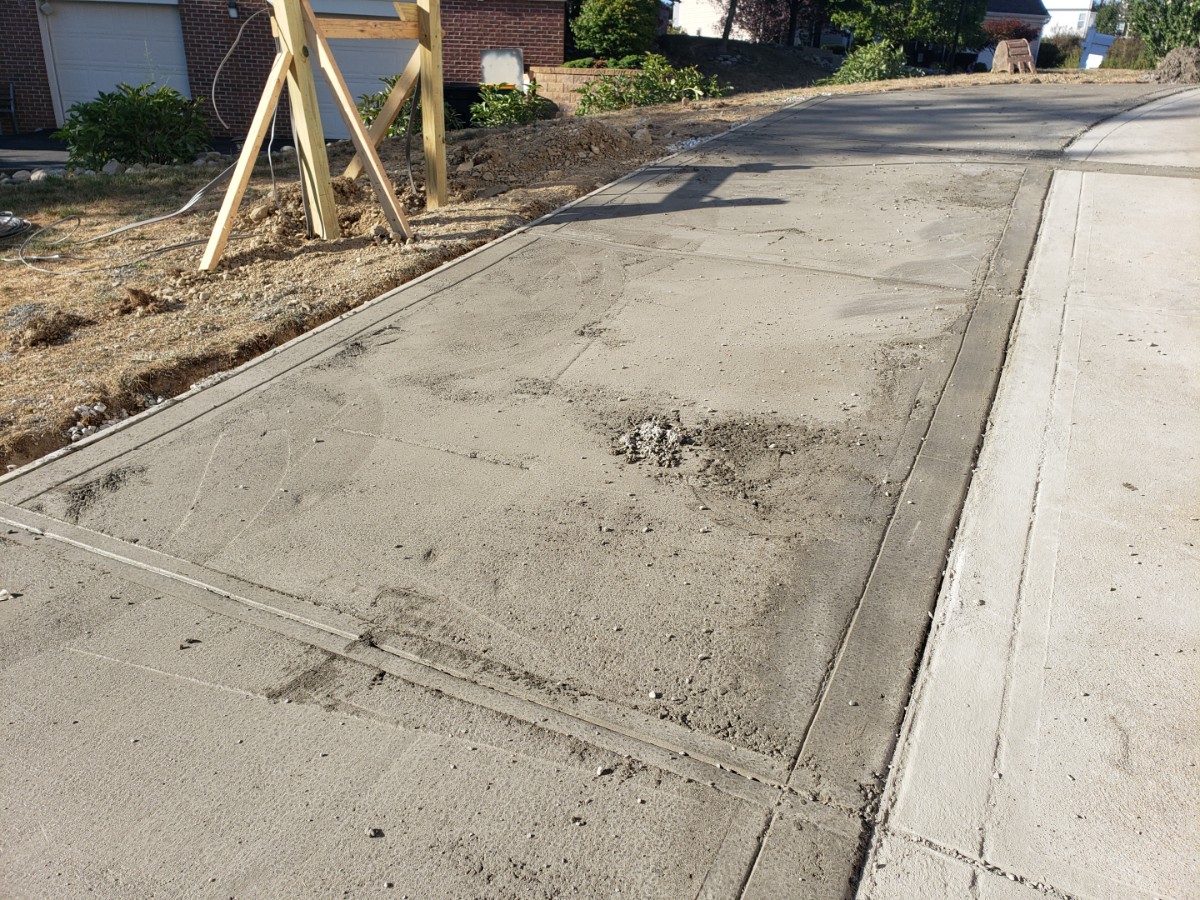 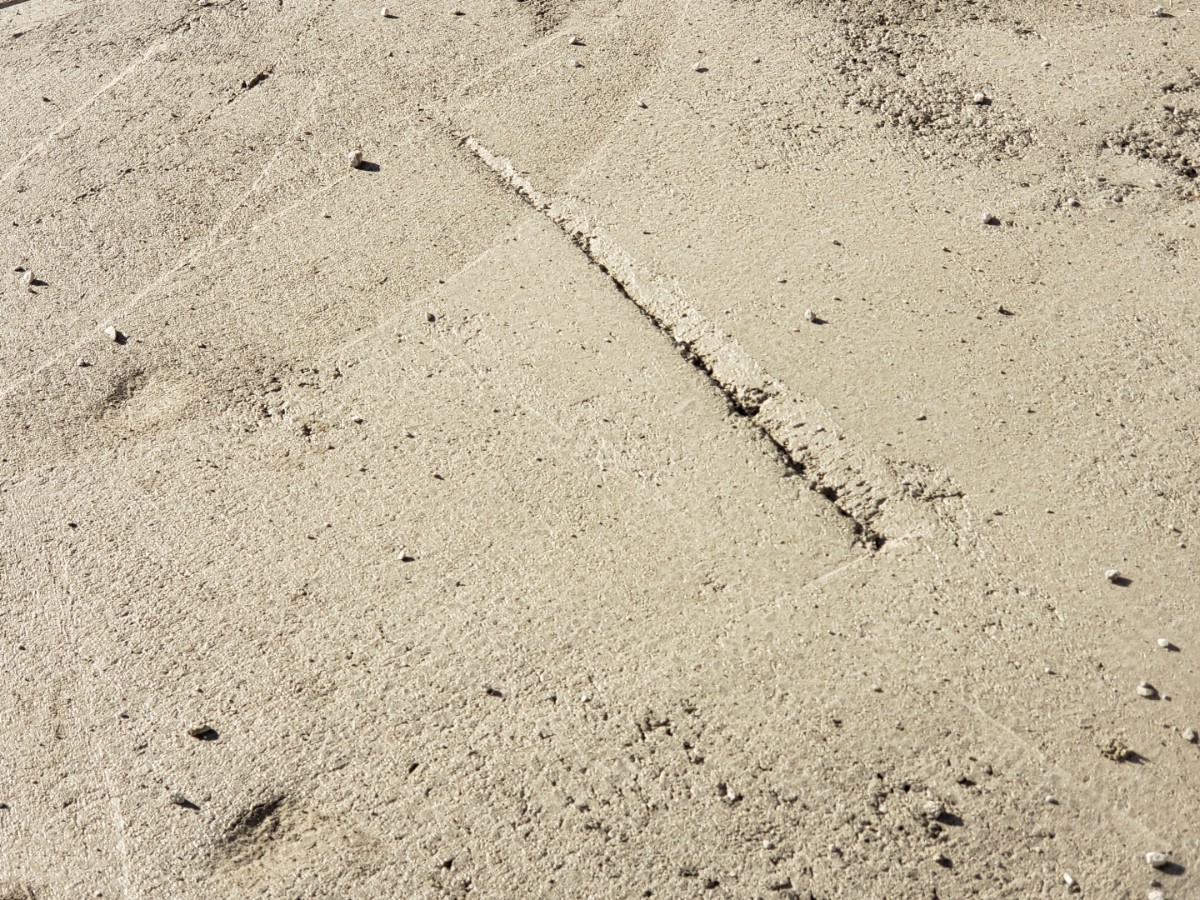 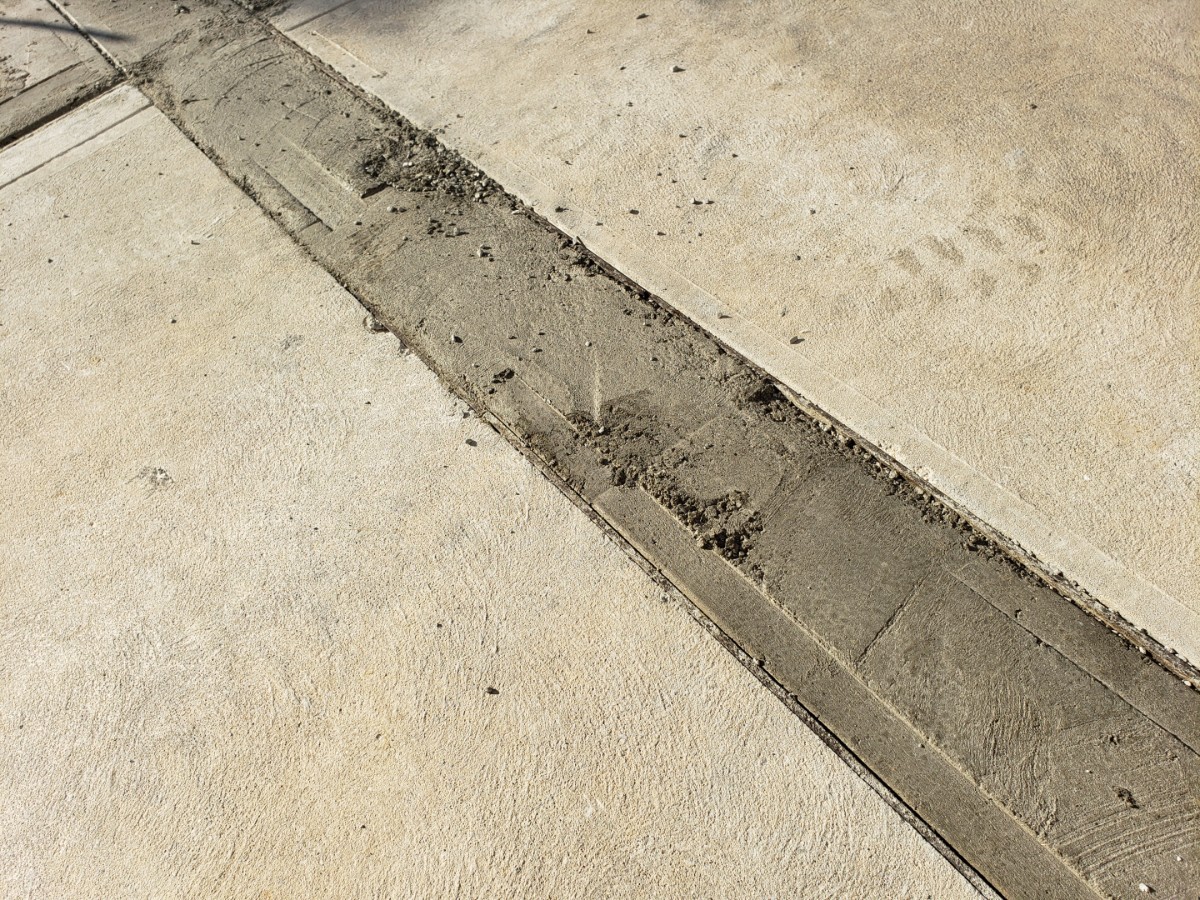 I've never heard of using a grinder as a finishing step (though I've only been a part of a few driveway pours). Is this normal? Will there be any long-term consequences (to stability or performance or appearance) of using a grinder at the end like this instead of just finishing it when wet? Or is this a red flag that things are about to go very badly and I need another contractor to come in and tell me the correct next steps?

I worry that the guys weren't prepared and just ran out of working-time.

To follow up and let everyone know what happened, I confronted them about the work. They admitted that the did not have sufficient experience, and ran out of time before the concrete set. They ground it down and said they would be back in next week to 'resurface' it, and grind down the resurface so it looks like finished concrete. They also told me that as long as the original concrete had not cured, the resurfacing should fully bond and provide adequate strength.

Edit 2 Because I often wonder what happened when reading old questions.

The resurfacing product manufacturer told me their product would only last 5-7 years. I talked to another, experienced, concrete contractor who recommend a complete repour, and I hired them to do so. 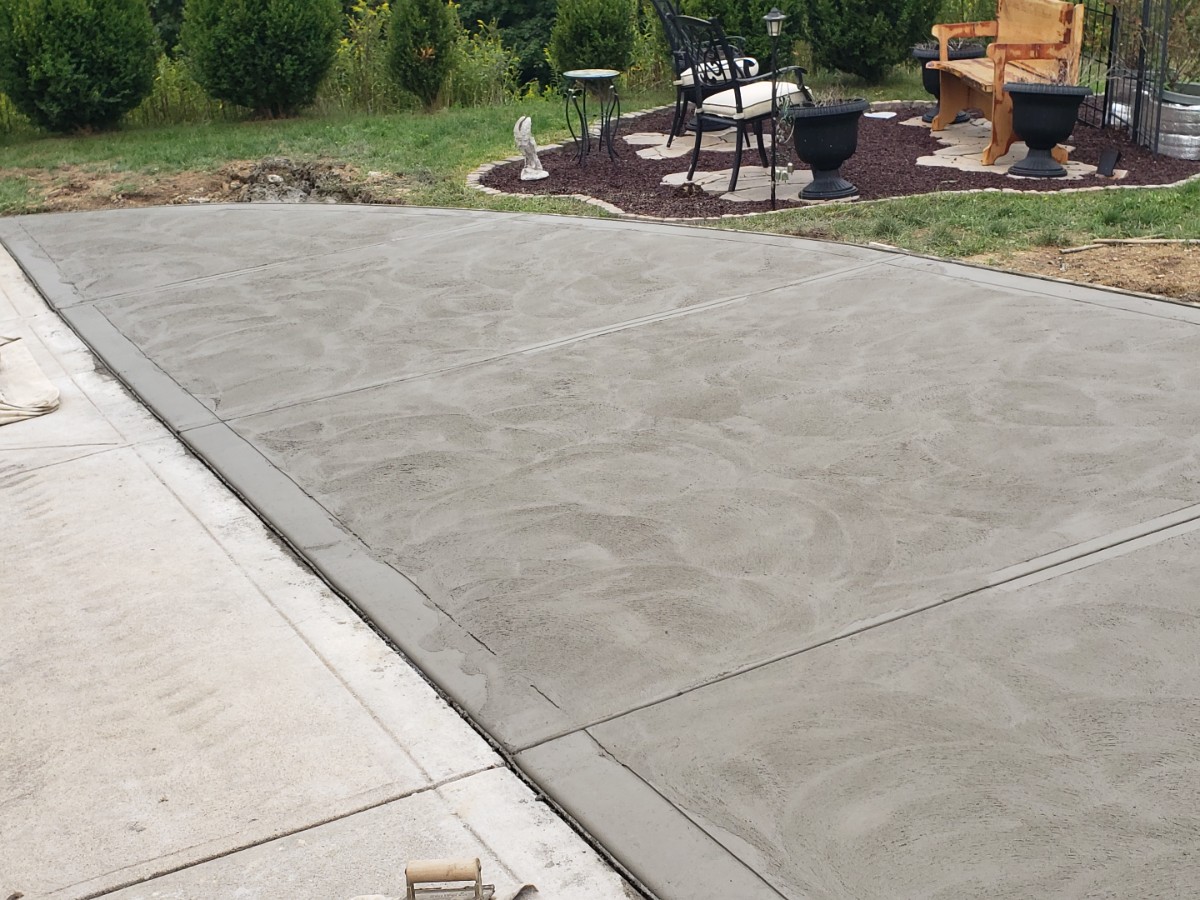 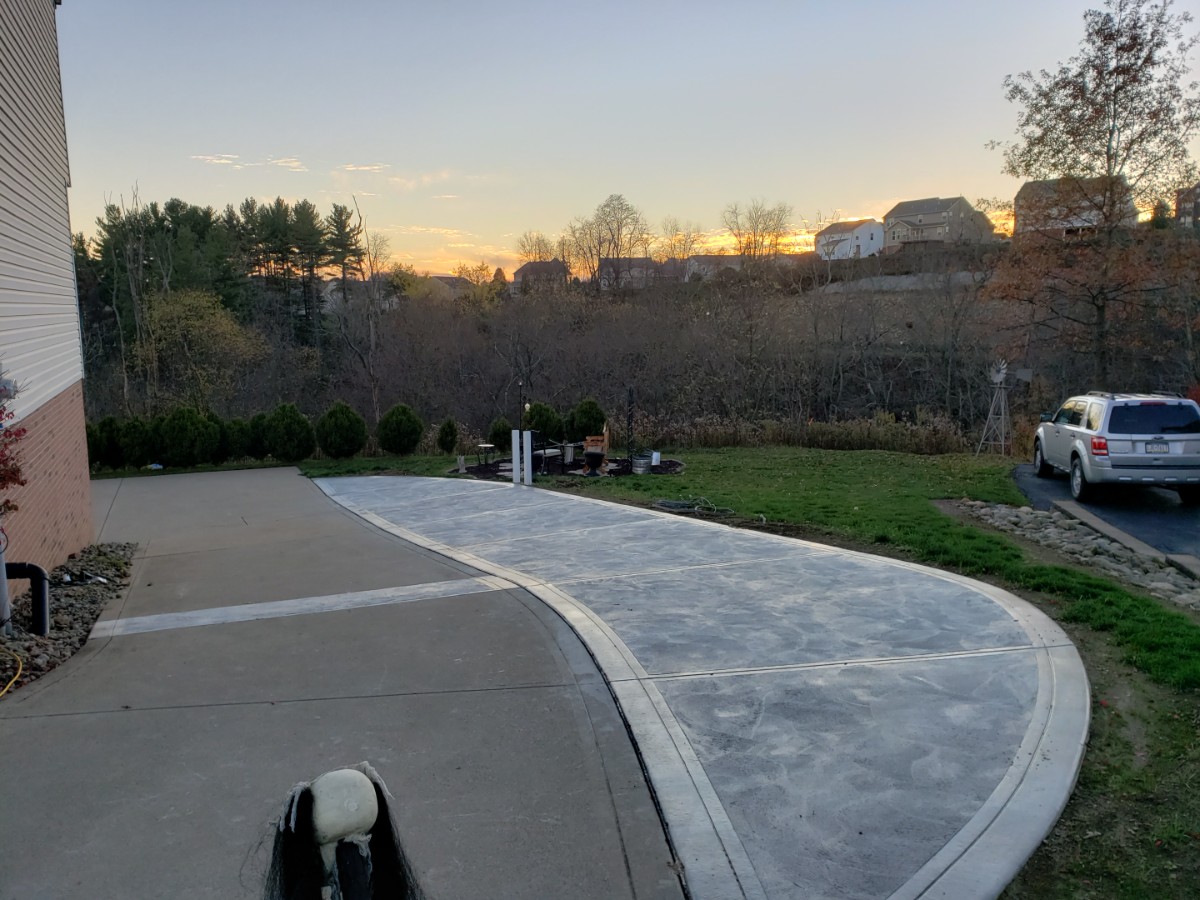 That looks like a very poor finishing job to me. I've assisted on many driveways and never had to go back with a grinder. Finishing it wet is all it takes and leaves the desired surface that isn't slippery. Watch them carefully and hold off on final payment until you're satisfied with the job.

Jack has a good answer but want to add. This strikes me as a concrete job done after they did another with whatever was left over. If the mix is that dry there could be major long-term issues.

From your picture (and I know its a picture and I am not there) it looks like that mix was never wet enough. You simply don't get "crumbles" with poured concrete. They tried to flatten/skim the concrete either way too late (I doubt) or with mix that had started to settle.

The "crumbles" left potmarks. These are a disaster if you are in a wet/cold climate. Water will sit in them, water will freeze, and the normal concrete issues you get at year 10-20 will happen in year 5-6.

And to answer your question - no you don't use a grinder on a concrete job. Also a grinder would be used to shave things. While the "crumbles" need to be shaved if they stick, the bigger issue as mentioned before are the small holes (potmarks) left. How does a grinder fix that?

The seam between the current concrete that's "set", and the new surface concrete they plan to pour, is referred to as a "cold joint". It's true that concrete continues to cure over time (the molecular crystalline structures continue to grow outwards, which is why you continue to water fresh concrete for a few days after a pour).

However, concrete never fully bonds across a cold joint. Depending on the depth of the surface pour, I'd expect it to possibly begin to flake off after a few years. For this reason alone, the thicker the surface pour the better.

Finishing does not just make the concrete look nice - it surfaces the 'cream' - it makes the cement come on top to make it stronger. Each hour, the top should be resurfaced to drive out the excess water reduce cracks.

You should NEVER lay new concrete on top of dried concrete. (Unless each slab is thicker than 3 inches and you use rebar to bind the layers). They will NOT bond together and WILL crack when water gets between.

If the concrete has "expired" before or during the pour, I believe that concrete needs to be completely removed and redone. Expired concrete will not cure to "design" strength. I would ask the contractor remove all of the concrete to restore the site to the condition before they arrived and for a total refund. Then I would find another contractor that agrees to the 90 minute rule explained below.

As the concrete hardens over the first few days, the sooner they jack it out, the easier it will be. After 30 days, the concrete will be 3 times stronger than it was at seven days. Break it up soon.

As evidence and to use to convince the contractor that you have a case, you chould get a copy of the "Batch Ticket" from the concrete company. They should have this record at their office. The ticket will have the batching time and other information on it. Next time, view the batch ticket before the pour and stop the pour at 90 minutes. Send the truck back.

The industry standard is:

"Discharge of the concrete shall be completed within 1 ½ hours or before the drum has revolved 300 revolutions, whichever comes first, after the introduction of the mixing water to the cement and aggregates.”

It is clear to this standard that it should only take 90 minutes for the concrete to be discharged from the mixer, otherwise the concrete can be considered “expired.

I hope this helps. Good luck. Please do not take my answer as 100% correct. I learned from "how was your day" dinner conversations. My partner is an expert in this and she has been "Owner's Engineer" on several job sites. She has placed many hundreds of loads or concrete. She has turned trucks back.

Not poured wet as noted above, the strength of the slab on grade will be compromised. Strength is directly related to length of curing time. Such inexperience also calls the installation of reinforcement into question. Ordinary concrete mixes or cement cannot be used as an "overlay" or skim coat as it requires much thickness for strength. Specialty modified cement mixes, in pails or pumped, are required to obtain adhesion and compressive strength in thin overlays. These are expensive. Grinding concrete requires diamond wheels and is laughable in this situation.

1
Driveway conversion to dog play area
0
Drainage on side of new driveway
0
Can this asphalt driveway be repaired?
2
Repair driveway expansion joint sealant during winter?
1
Is chert a suitable base for a concrete driveway?
0
Outdoor concrete repair/resurface/sealing and painting
3
Best way to fix bottoming-out on driveway curb-cut?
2
What considerations should I make when demolishing a driveway?
0
Can tree roots raise a driveway concrete slab?