Why are two breakers connected across a third breaker? 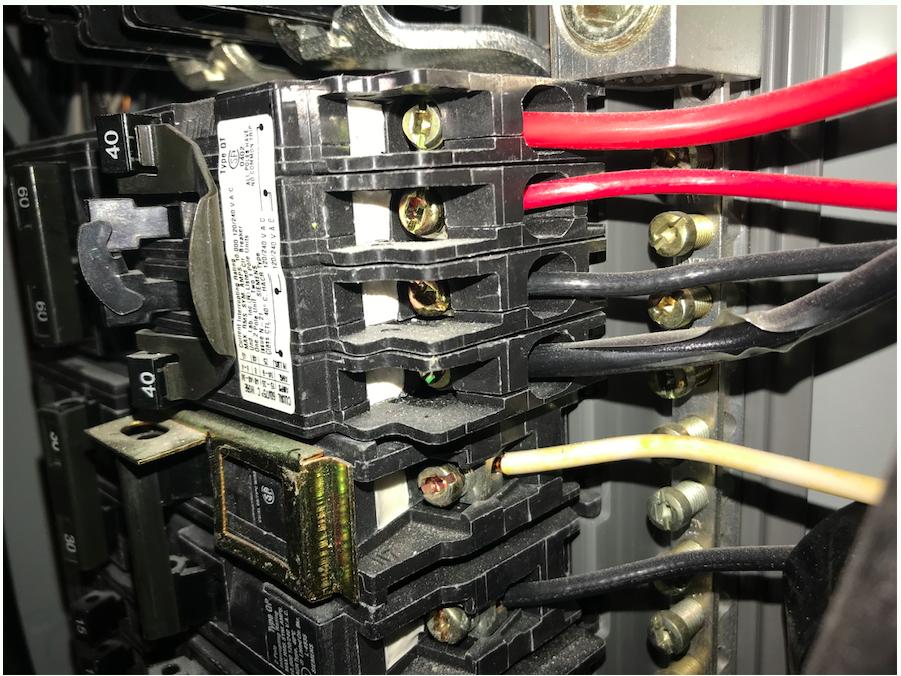 This is a 17 yr old double wide mobile home. Our plan is to use existing 240V wiring, kill one of the lines and connect the other to a new 20A breaker to make a 20A 120V for the gas range.

I've never noticed this before but I've never seen anything like it. Two 40A brekers, I assume a separated double pole, for the range straddles the 30A dryer breaker? It's obviously designed this way since there's a bracket hooking the two switches together. Any idea why, or any cautions for me? Thanks in advance! 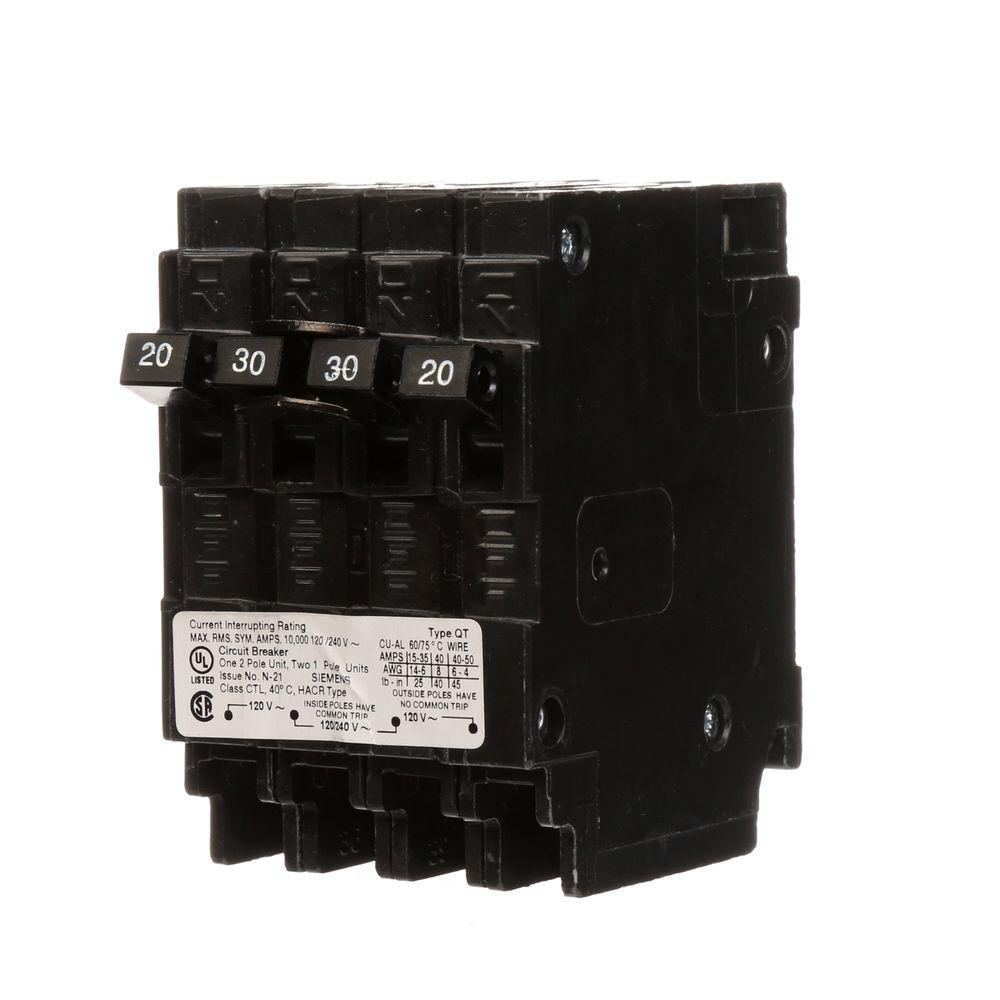 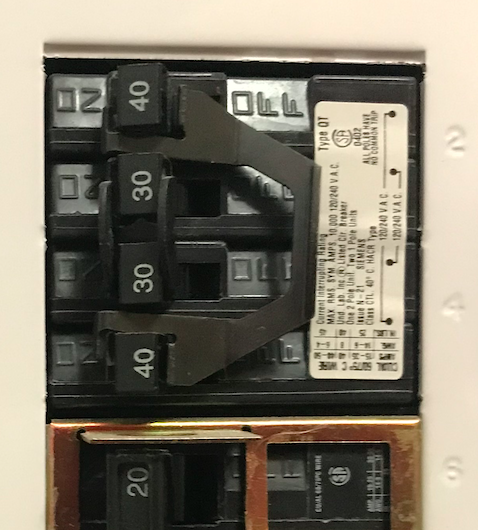 This is a quadplex breaker. Basically, in order to squeeze more stuff into breaker panels, many manufacturers came up with a way to squeeze two breakers into one space. The problem is that for 240V loads that doesn't work - you end up with 0V between the pair of breakers instead of 240V! So then they came up with quadplex - 4 breakers in 2 spaces. The inner 2 and the outer 2 are each 240V pairs, just like traditional double breakers.

I am not a breaker expert, but that looks to me like it may be "handle tie" rather than a true functional double breaker. Actually, the "All poles have no common trip" reinforces that the breakers are independent of each other, electrically speaking.

That is OK for some situations (MWBC), but if I am correct then that was never actually correct for a 240V circuit such as an oven. That being said, it doesn't matter if you are changing things anyway.

There are two possibilities here for your current (yes, pun intended) situation. You may be able to swap individual breakers, or you may have to deal with them as a set of 4 (quadplex). If they are individuals then you can pick one of the two 40A breakers and replace it with a 20A breaker. Based on the latest picture, the circuit is using neutral, so you can swap either breaker and leave the white neutral as-is. If the new gas range is hardwired, then you should be all set. If it has a plug and you are installing a 20A receptacle, you will likely need to pigtail the 8 AWG wires to 10 or 12 AWG wire to connect to the receptacle, as many can't handle 8 AWG wire.

Make sure the breakers are correct for the panel. There are a lot of similar breakers from different brands. The wrong ones might fit but won't fit correctly.

Also, in case it wasn't clear already, you can't replace a quadplex with two pairs of duplex breakers if even one of the pairs still needs 240V.

That makes them unfit to feed either a dryer or range -- both those loads are 240V loads with a neutral wire, and as such, they do require common trip. They would be acceptable for an air conditioner or water heater, which do not have neutral.

If you can find an appropriate 20-30-20 quadplex (which is to say: one with common trip in the middle), you could drop this in to replace the existing breaker, and change sockets and pigtail as needed to put your gas range on one of the 20's.

28
What is a tandem breaker (aka duplex, cheater, twin, double-stuff, etc.)?
15
What is the difference between a “handle tie” and “common trip” in circuit breakers?

6
Why does my GFCI circuit breaker trip with any small load, even after replacing the breaker?
1
Loads for sub panels from 150A split-bus main panel
4
What are good uses for tandem (double-stuff) breakers?
3
Adding a 100A breaker in front of a feeder
0
Combining wires from two breakers to one appliance?
3
Separate panel for house in garage - how much capacity do I reasonably have left?
2
Outdoor disconnect for central air plus mini-split
0
Seeking advice on how to rearrange existing breakers and add 2 circuits, including a 20A GFCI/AFCI breaker in a split-buss GE panel
2
What to make of electrical rating etched into circuit breaker?