What are the options for filtering fresh air entering a building (especially outdoor air with wildfire smoke)?

I'm confronting once again the California wildfire season. The outdoor air quality is poor right now and it's spreading all over. If we bunker down in place I'm worried about the air conditions inside our living space getting too unbearable. We have a couple of portable HEPA filters and they do a great job filtering and recirculating the air, however we still need fresh air in the building. The trapped heat, humidity, increasing carbon dioxide concentration, major stuffiness, etc is a lot to deal with during the summer heat where normally opening a window to the outside would mitigate all of the above causes of so called "stale air". However in these wildfire conditions ventilating with outside air subjects you to wildfire smoke which immediately and overwhelmingly infiltrates the house.

How can one exchange stale air with the outside while filtering the incoming air sufficiently to ideally eliminate wildfire smoke? 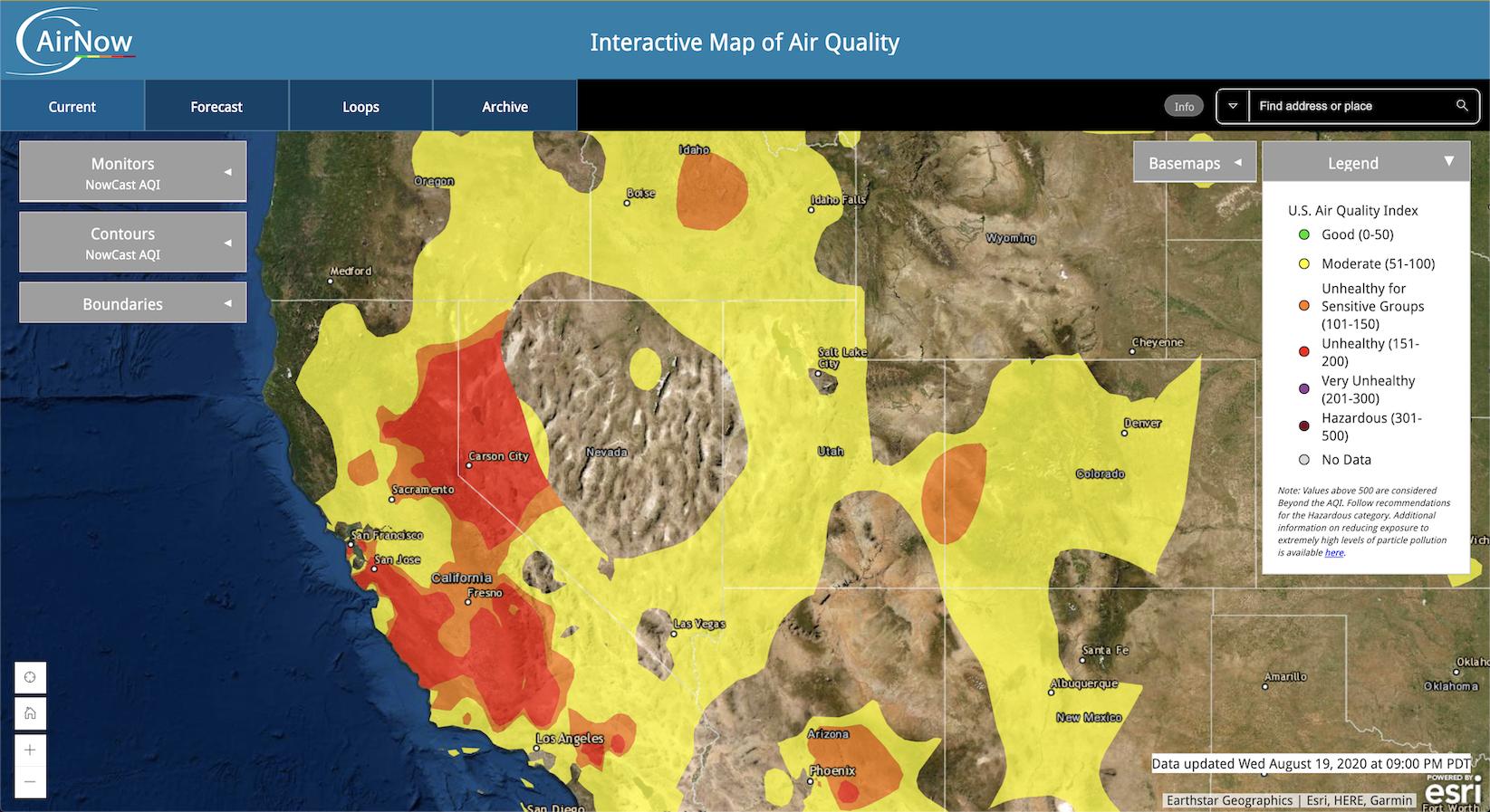 To be concrete we're talking about taking outside air with a Fine Particulate Matter (PM2.5) reading greater than 150 and dropping it down to the healthy range of at most 50.

Here's some background on wildfire smoke that the filters will need to contend with:

Particles from smoke tend to be very small - less than one micrometer in diameter. For purposes of comparison, a human hair is about 60 micrometers in diameter. Particulate matter in wood smoke has a size range near the wavelength of visible light (0.4 – 0.7 micrometers).

Particulate Matter, or “soot,” is made of microscopically small particles, either solid or liquid. The smaller the particles, the deeper they can penetrate into the respiratory system, which causes more significant health problems.

Particles less than 10 micrometers in diameter can cause significant health problems. Particles under 2.5 micrometers, called “fine” particles, are considered the most dangerous. Fine particles can easily bypass filters in the nose and throat and penetrate deep into the lungs. Wood smoke from woodstoves and fireplaces is the major source of fine particulate matter in the wintertime in the Bay Area.

To use a car cabin as an analogy, think about when you use the recirculate function, eventually the air gets pretty stale and you need to open the windows. To be sure filtered air is not the same as fresh air because the composition of fresh air is more than the absence of particulate matter. In a more or less closed system such as a car you can recirculate through a filter indefinitely and have the cleanest air, but eventually you run out of oxygen. In short filtered air is not equivalent to fresh air.

Electrostatic air filters are awesome I had a large set n my last house on the air handler intake. Even when we could not see the mountain across the street the air quality inside the house was excellent.

I can say this as one of my granddaughters has severe asthma we normally leave the fan running 24/7 that system has a small make up air intake that enters the duct several feet prior to the grid. So a small amount of fresh air is being drawn in the home and filtered, during the bad smoke I had to clean the filter under a month because it was filthy but the entire time my grand daughter was inside she had no problems They stayed for over a month because prior to that she had been hospitalized.

I have seen portable electrostatic fans that do the same thing and these are less expensive than hepa filters because the filter needs to be changed and you can not just put a hepa filter in your air handler because of the pressure drop. I have not used the passive filters Ecnerwal comments on but know customers that like them but they also need to be cleaned regularly and do not have alarms like the powered ones do when dirty (some start snapping some set off a buzzer) but the passive ones are much cheaper than a hepa or hardwired/ ducted electrostatic filter.

I would verify you have make up air on your air handler it is usually a small duct less than 4” on the intake side of the air handler some times located in the crawl space or attic and it can be as small as a 1” hole I would guess mine was dampened down to aprox 1” because we ran the fan 24/7.

@jxramos answer looks like a good one but since I did not see electrostatic I felt this should be covered the portable fan with electrostatic grid would be my suggestion for constant filtering or try the electrostatic if you keep your fan running we found it worked the best for our granddaughter 24/7.

OFF THE SHELF PRODUCTS

There's a couple of options on the market for dealing with this problem; however some of the suitability for managing wildfire smoke is unknown from my initial research. I'll try to follow up filling in the gaps for the filter media some of these products employ and relate that to smoke particle sizes.

These specialized hvac units pull fresh air in, exchanges heat with the outside air coming in, and passes the incoming air through a filter. Terms such as fresh air ventilation or fresh air requirements show up in literature for these products https://en.wikipedia.org/wiki/Heat_recovery_ventilation. These are known as a balanced ventilation system since they do not produce a positive or negative pressure inside the conditioned building. Many of these units are big bulky and designed to tie into existing central air ductwork, there are however units that integrate directly into exterior walls alone and operate in pairs to maintain air balance.

There's inline fans that can be integrated into traditional hvac ductwork. One company specializing in filters in ductwork is the AirBoxFilter. There are also products known as Fresh Air Supply Fans. A video of a Panasonic unit shows the integrated filter rated at Merv 13 designed to pull in and filter air from the outside. Interestingly enough in this same space apparently people growing Marijuana use inline-fan/filter setups to exhaust air out of their grow rooms to scrub the odors or something. It's unclear how much filtration power these media would have since they're designed for other objectives. These products are sold at hydroponics shops and even Home Depot: eg 6 in. Carbon Air Filter with Flange 125-250 CFM Exhaust.

This is where the filter media is placed in an aperture of some kind open to the outside of the building, typically a window. This fella created a DIY window based intake filter from a furnace filter, an air conditioner prefilter, and some other charcoal prefilter mesh. There's also this window filter product also sold at Home Depot: Activated Carbon Passive Window. Basically pressure and temperature differences would drive the air across these filters in whichever direction the gradient happens to flow. There's also these passive inlets that could potentially have filter media integrated to them somehow.

--talks about the different mechanisms that outdoor air takes to enter a building.

--talks about the three types of of outdoor-air ventilation systems: exhaust-only, supply-only, balanced.

--introduces some alternative vocabulary for this concept.

Finally, a couple of news articles that discuss dealing with wildfire smoke

Not the answer you're looking for? Browse other questions tagged ventilation air-quality smoke or ask your own question.

10
What are my options for venting a bathroom exhaust fan?
4
What type of island hood do I need?
4
Can I attach a HEPA filter to the HVAC outlet?
0
What are my options for temperature equalization between two rooms?
0
What is the correct Air Flow change per hour for my house?
2
Continued Excessive dust in home air
1
what is the name for this type of air intake gap on a residential roof which has no overhanging eaves and lacks soffit vents
5
What's the most effective way to further reduce attic temperatures in hot weather?