recently I got a bid from a solar company and they said I don't need to upgrade my eletrical box since it is rated at 125 amps, and for that value, I can install a 7k system based on calculation here https://www.altestore.com/blog/2018/11/grid-tied-solar-breaker-box-120-percent-rule/#.XzwpBpNKg8N. I poked around the panel itself, and found two ratings, 100amps and 125 amps, and I am not sure which rating should that solar company to use, and definitely blowing out my electrical box after solar panels are installed is the last thing I want to see. 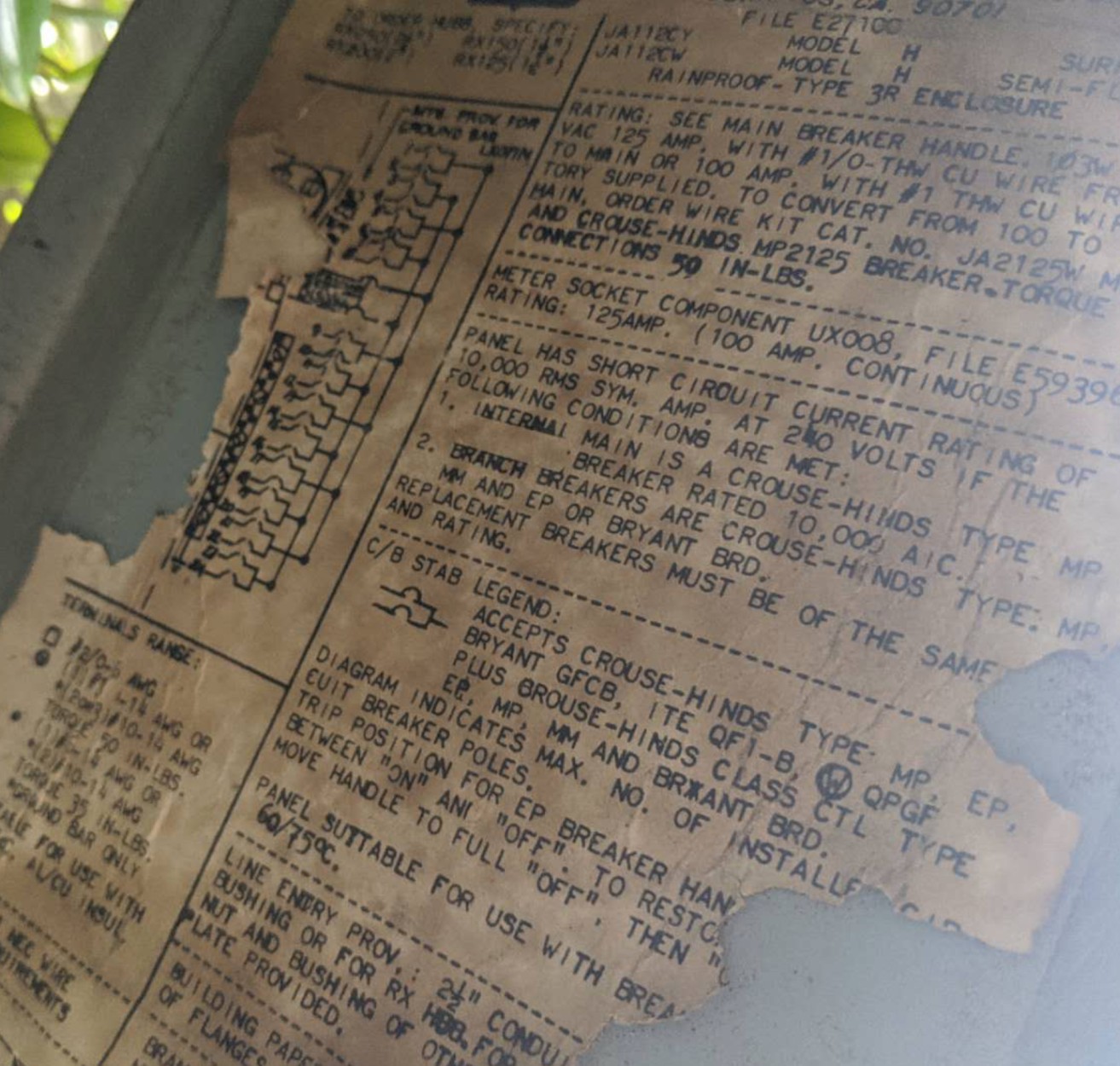 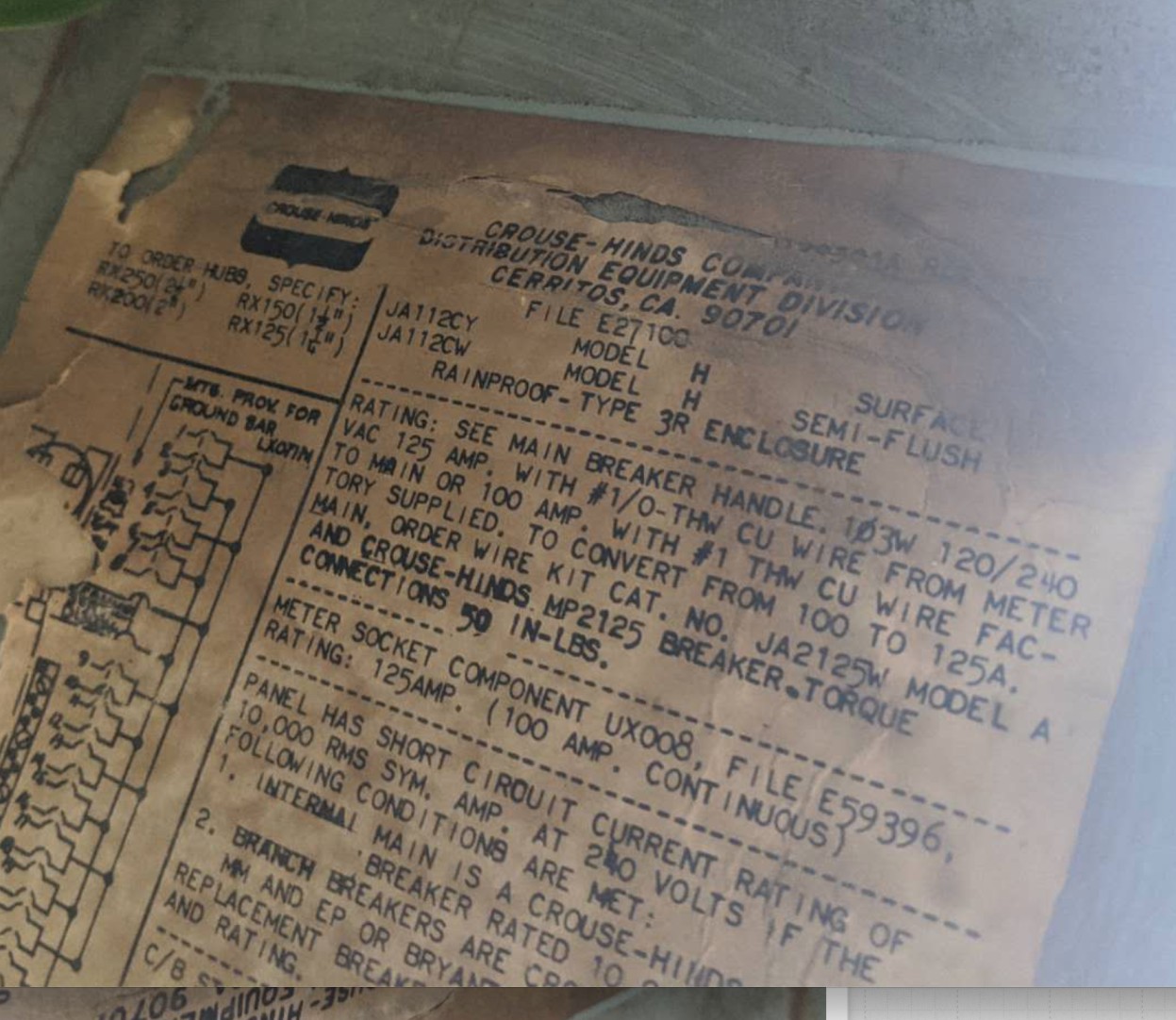 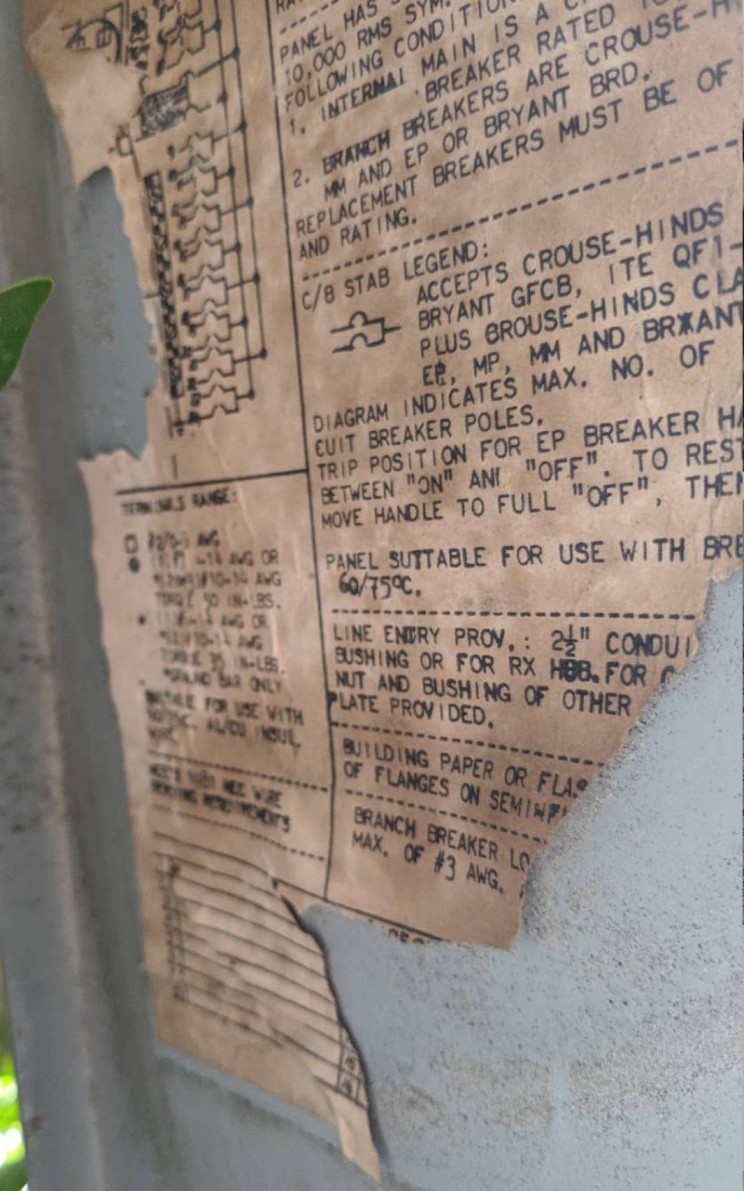 From the labeling on your panel, in particular the note about field upgrading 100A mains to 125A by replacing the main breaker and the meter-to-main-breaker wire jumpers, we can tell that this panel has 125A busbars in it, since UL wouldn't have permitted the manufacturer to provide such an upgrade as an option otherwise.

(d) A connection at either end, but not both ends, of a center-fed panelboard in dwellings shall be permitted where the sum of 125 percent of the power source(s) output circuit current and the rating of the overcurrent device protecting the busbar does not exceed 120 percent of the current rating of the busbar.

Note that this 120% rule is the same as the rule in subpoint 3(b) that'd be used if your panel was end-fed with the solar breaker at the other end; this means that the 120% math works out all the same, and gives us 150A for the combination of main and solar feed breakers. With a 125A main breaker, this lets you put a 25A solar breaker in, which limits your system to 6kW.

If you have an AHJ that's not quite with the times, you may run into trouble as the standard load calculations tend to be more restrictive when applied to center-fed configurations such as yours. In that case, I would talk with the AHJ about a written variance to use the above center-fed calculation method.

The one other issue you might have with this panel is finding breakers for it. Siemens has discontinued the Murray MP line of breakers, and it appears that the other breaker types it is labeled to take are either GFCI (ITE/Siemens QF1-B, Westinghouse/Eaton QPGF, Bryant/Eaton GFCB) or double-stuff (Bryant/Eaton BRD).

If you don't wish to take a minor gamble on New Old Stock Murray/Siemens MP breakers being available and in good shape, I would use a Siemens QP breaker, based on the subsitution letter Siemens provides, although that's subject to AHJ acceptance of the subsitution. If you can't get your AHJ to accept Siemens breakers in this panel for some odd reason, you can Eaton CL for the solar breaker as that's UL classified to play nice in Murray (including Arrow-Hart/Crouse-Hinds) panels.

If none of those are an option, your AHJ might be willing to accept an Eaton BR (not BRD or GFCB) breaker in the panel based on it being crosslabeled for BRD and GFCB types, but that's a judgement call considering that UL never tested it for that precise configuration. (Granted, it's not much different from putting a NOS MP120AFC arc fault breaker in the panel, considering it's far too old to be labeled for type MP-AT2 breakers.)

What that listing says is this panel is made with wire jumpers between the meter pan and the main breaker.

If the wire is 1 AWG, the panel is rated 100A. If 1/0, then 125A. Either way, that wire which is what differentiates the two ratings, is in series with the main breaker, so protected by the main breaker. Therefore it is out of scope for the 120% solar de-rate.

Both versions of the panel have 125A busing. That is what matters.

The main breaker + the solar breaker cannot exceed 150A.

Your panel is what's commonly known as a 125A panel.

Your panel is labeled more completely than most are. All panels (all electrical equipment really) have both a maximum rating, which they can handle for a short time, and a continuous load rating, which they can handle indefinitely. And the way it works in the NEC, is that continuous loads are only allowed to use 80% of the available capacity. So, if you were to load your panel with entirely continuous loads (nearly impossible in a house, but not that weird in an industrial setting), you'd only be able to use 125*0.8=100A. Panels that are marketed for residential and not industrial uses typically don't give you that second number as well, but it's always 80% of the maximum rating. Assuming you're using this for normal residential uses, where most of your loads are intermittent, you can consider this a 125A panel.

Also of note: while Crouse-Hinds is no longer in business, their breaker business was bought out (and fully supported) by modern breaker companies. Your panel can accept Siemens or Murray type MP breakers (thanks @threephaseeel), or certain Bryant type BR GFCI breakers.

Not the answer you're looking for? Browse other questions tagged electrical-panel solar-panels solar or ask your own question.

0
How does a roof replacement impact recommended timing of solar panel installation?
2
Charging a battery with a solar panel
3
Considerations when installing uprated main panel at new location, feeding old
2
Electrical panel bus rating
2
Sub-panel tapped from aluminum feed in Duplex
3
One meter (200A service) feeding two main electric panels 100A ea, is it legal?
3
How does a panel get its current rating?