Does a drainage pipe need to be continuously sloped?

I need to move water from the back yard to the front yard, to combat the monsoon season, in which a 50 gallon container in the backyard can fill up in 1-2 minutes. I bought some 4" piping, and will have it collect water in a drain in the higher back yard, and divert it in a half-circle around the house to the lower front yard.

I'm finding that due to the length of the pipes, about 150 feet, it is difficult to make it continuously downhill. There already is a slight slope of 1" per 10 feet horizontally. Is there any issue if the pipe is not perfectly sloped, and in places goes slightly higher than before, so long as all of the pipe is lower than the entry drain?

It's true that, so long as the exit is lower than the entrance, water will find its way through the pipe even if there are low points in the path. However, as others have noted, debris could accumulate in those low points. So the answer to your specific questions "does it need to be continuously sloped" is a squishy "yes.. unless you're willing to install mitigations."

One mitigation you could consider is one or more sump pits/traps/catch basins along the path. Here's a sketch from Dejana Industries: 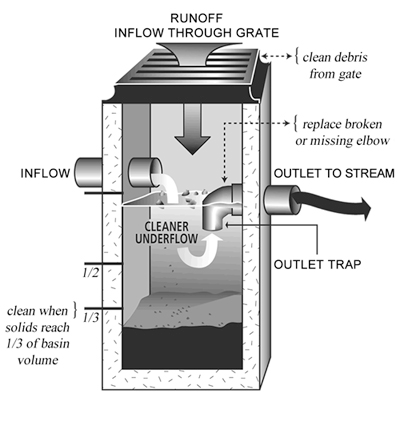 This construction is specifically designed to catch debris in storm water systems. That's not what you're after, so we can modify the design a bit.

Run pipe with a continuous slope at a sufficiently steep grade so that debris will carry along well. When you reach a point that the pipe is getting too deep in the ground, install a catch basin there. Take an exit pipe out of the pit at a level higher than the inlet and proceed to the destination.

Construct the basin to be leaky so that after the storm the water remaining in the basin slowly drains away. That'll minimize the chance of breeding mosquitos or odors. From time to time you'll have to clean out the debris from the bottom of the basin, but it's better to have it there than in some unknown and inaccessible section of pipe buried in the yard!

If you are in a climate where the water can freeze it is a definite problem.

If not, there is still the potential for debris and sediment to settle in the low sections and eventually clog the pipe.

Your fix is to make like a Roman Aqueduct and support the lower "dips" so that the pipe runs at a more-consistent downward angle.

This will also make the water flow faster, flushing possible sediments without a chance to block up.

Aim for a straight run of pipe with the same drop over distance, rather than a specific angle. Start by supporting the pipe with wood or stone and once its well-aligned, consider more permanent solutions like concrete.

Two problems can be encountered without continuous slope:

Otherwise, siphon effect and gravity will keep the water draining as you would hope.

Note: 50 gallons of water weighs 400 pounds, so whatever you set the container on needs to be really sturdy.

My rain barrel is only 35 gallons, but you can see that I have elevated it about 10-12 inches: 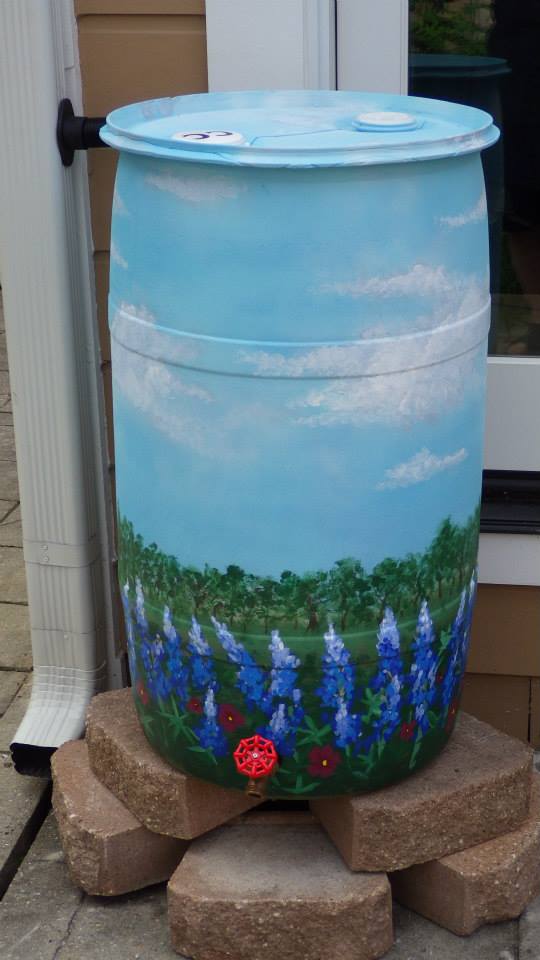 Not the answer you're looking for? Browse other questions tagged pipe drainage or ask your own question.

2
How can I divert down spout water above ground to a different location?
0
Drainage Pipe Question
1
basement sump pump water level above drain tile
2
Front yard flooding, drainage help needed
1
Can there be too much water for a drain system to move?
2
Finished grade in my yard is pure clay. How much topsoil should I add?
0
How far out to install french drain so water can't pass underneath it and still get into house?
2
Sanity check on DIY drainage repair