Is the following diagram of multiple lights in parallel valid?

There were some people who claimed it didn't work (they claimed their flow followed the diagram, but who is to know) while another just said it wasn't right.

Also, is the following diagram of multiple lights in a parallel 3-way valid?

I have an electrical book somewhere, but I stumbled onto this site and thought someone might be able to educate me, or at least validate or invalidate the diagrams and hopefully help me and others.

It makes sense to me, but I am only an amateur at wiring.

If no one can answer, I will just test the concept with a scale model of the configuration.

The first diagram used to be valid, but hasn't been any good for a decade now

Back in the olden days, the first diagram used to be a perfectly cromulent way to wire a set of lights to a single switch with power coming in at a light and a downline always-hot provided for receptacles. However, the 2011 NEC added a requirement for neutral to be provided at all switch locations, so that lighting control gizmos could power themselves without causing annoying malfunctions, such as flickering or dimly glowing LED loads, or naughtily trickling operating currents onto the equipment grounding system for that matter.

The second diagram, though, never was Code compliant

While the second diagram isn't impacted by the 2011 NEC changes to require neutrals at switch locations since there is a neutral available at the left-hand switch as a function of power coming in there, it wasn't ever Code compliant to begin with, even though it works. Why? Well, in order to figure that out, we need to understand a thing or two.

Most people think of electricity in terms of DC, where magnetic fields are a non-factor and wires can be run any way you wish (such as in a car) without causing interference with other wires. However, that no longer holds when we start talking about mains electricity since it's AC, not DC. In particular, any loop of wiring with AC flowing through it has a varying magnetic field inside that loop. This magnetic field can be quite useful, as it's what allows us to have handy-dandy electromagnetic gadgets like motors that work readily, and also allows us to build transformers to step AC up and down.

However, it comes with downsides as well; in particular, if you put a wire carrying AC power out to a load some distance from its corresponding neutral that returns power from that load back to the utility, you now have a time-varying magnetic field inside your wall. Since putting an iron object in a magnetic field induces current into that iron object, and iron isn't a great conductor of electricity, any iron object that is in that time-varying magnetic field heats up. This is wonderful when it's happening to a pan on your induction cooker, and very bad if it's happening to say, a nail inside your wall.

As a result of this, NEC 300.3(B) and 310.10(H) effectively prohibit splitting a wiring path between cables, as was done in the second diagram with the two 14/2 cables between the light fixtures. Instead, you need to combine those two runs using a single 14/4 cable or 5 14AWG wires in a 1/2" ENT ("smurf tube"). This way, all the magnetic fields are contained within the cable sheath or conduit, so they won't leak out to the point of heating up nails in your walls.

Both of the diagrams function, but neither satisfies current NEC. Neither provides the required neutral at the switches and the second improperly uses a white as a traveler.

Life is much easier if you mark your wires.

As NoSparks and the Eel discuss, diagram 1 fails because it doesn't provide a neutral at the switch loop.

Once you use the correct cable, a neat thing happens: white becomes neutral, black becomes always-hot, and red becomes switched-hot. The wire colors correspond to wire function and you don't need an arcane map to figure out what the wires do. 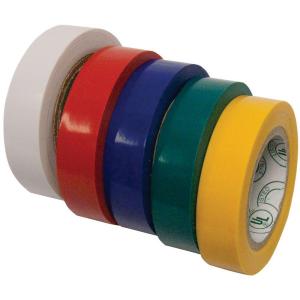 Well, thanks to the miracle of colored tape, the second diagram doesn't have to be the aneurism-inducing nightmare that it is. Same deal as before: 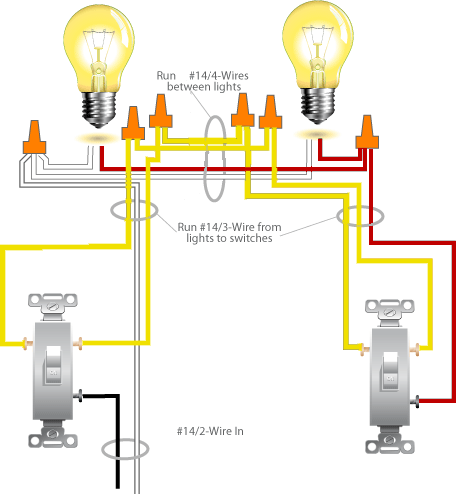