I have a receptacle in the middle of a series of receptacles, it has line in and load out to the next receptacle (no pigtails). I need to add another outlet near this receptacle and due to placement this is my only option.

What is the best way to do this? Should I strip some 6" pieces and pigtail the charge, neutral and ground wires at the line end of this receptacle? Or should I pigtail the load end and make this receptacle feed two others simultaneously? 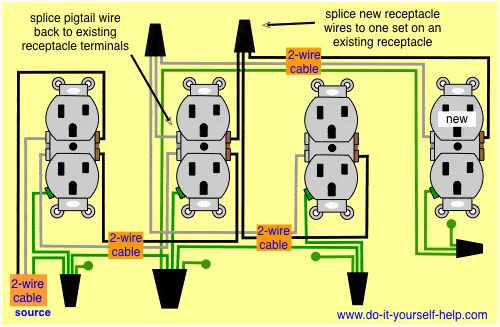 I use the words "supply" and "onward" to refer to the two types of cables coming into an electrical box. I don't use Line and Load, because those terms are special where GFCIs are concerned, and careless use of them leads to disaster.

LINE and LOAD: Just use LINE.

You say every receptacle you've ever dealt with has LINE and LOAD plainly marked. That means you're only dealing with GFCI receptacles.

Virtually all GFCI receptacles have a feature that allows 2 wires on the LINE screws. (If you need more, you can always pigtail).

GFCI devices have a very special feature called "Downline Protection". It allows the GFCI device to confer GFCI protection to additional loads that are fed from it. So for instance if you had a GFCI recep in a bathroom, it could protect a light inside the shower stall. This Downline Protection feature should not be used casually or carelessly. It should never, ever be used unless it is your specific intent to do that.

To protect a downline load, attach them to the LOAD terminals. LOAD terminals should never be used for any other purpose. That is why they put warning tape on them.

When you protect a downline load, there is more work to do. The downline load must be troubleshot to assure there aren't pre-existing ground faults or miswiring. Any receptacles must be labeled "GFCI Protected" (and also "No Equipment Ground" if that applies). These markings are mandatory, and are part of the act of protecting a downline load. Ignoring this is a Code violation, and will get you written up at sale time. Again, LOAD should never be used except for that purpose.

Part of my own "GFCI Protected" labeling is a statement of where the GFCI device can be found.

I'm fond of saying that warning tape says "Do Not Use. For Wizards Only". A wizard being someone who has learned to wield the downline-protection tech correctly.

Between what you already knew, and what you read between the lines above, I gather you have figured out the downline-protection stuff. Congratulations, wizard!

Now... Use it when you want to, and when it makes sense.

If it best suits the situation, you can put one of them on LOAD and the other on LINE. Or both on LOAD - this doesn't require a pigtail because the LOAD wires also can accept 2 wires under each screw (read the instructions to see how).

If you want to put both on LINE, given that there is already a wire on LINE, that would be three, so you'll need to pigtail.

Also revisit any past installations and move LOAD to LINE everywhere (except places where you specifically want downline protection). In particular, eliminate any instance where LOAD of one GFCI feeds LINE of another. That will cause major annoyances.

Now the box has finite size. There'll be a practical issue fitting the wires and also a GFCI device, but there's also a statutory issue. Given that your wire size is #12, you must allocate 2.25 cubic inches for each hot and neutral wire.

Look around in the back of the box for a stamp indicating number of cubic inches in the box.

If you are beyond statutory maximums, or beyond practical maximums, you can get a box extension. One of my favorites is called the Legrand Wiremold Surface Conduit Starter Box. It's made to give a 1" lift so you can run surface conduit off of the box, but if you just use it for the 1" lift, I won't tell ;)

If you're thinking "tap rule arcana" you need to read a lot more closely; that only applies to industrial applications in metal conduit etc. If you're in metal boxes, you're really in trouble on cubic inches lol.

If you're thinking the 15A GFCI device will somehow block >15A, no, it doesn't have any ability to do that. As a matter of fact, it is specifically made to pass 20A. UL requires every 15A rated receptacle be able to passthru 20A. That matches a Code rule allowing 15A receptacles on 20A circuits. That is so consumers and electricians only need to stock/buy one kind of receptacle for ordinary stuff.

Or, if the circuit is allowed to be 15A (kitchen, laundry and bathroom receps are not), then you can downgrade the breaker to 15A and run #14 as much as you please. This, however, invites some goober to see the #12 wire in the panel and think it's OK to up-breaker to 20A.

Ok, but terminology aside, NO you can not use 14awg wires on a 20 amp circuit.

You did not state the location of this change; if it is in a garage, unfinished basement, or bathroom, the new receptacles would be required to be GFCI protected.

3
Single outlet resettable breaker?
4
How would I go about adding more receptacles to a garage?
3
Can you have both 15 and 20 Amp receptacles off the same 20 Amp GFCI?
0
2 prong to 3 prong outlet - with pigtailed grounds
0
Why is GFCI Receptacle Tripping From Downstream Fluorescent LIght on Switch?
3
15 amp line connects to -> 20 amp line -> 20 amp GFCI -> 15 amp outlet
0
Tesla Mobile Connector tripping GFCI on NEMA 5-15
3
Fridge tripping GFCI Outlet