How do I get out the remnants of a rake handle using a drill?

A few days ago, my wooden rake handle broke during use, so I grumbled about it, went to the hardware store a few days later, bought a new handle, and set about installing it.

Unfortunately, I can't seem to get to even get started because the remnants of the old handle are still wedged firmly in place. I tried to check a few Youtube videos on this, but they're either focused on repairing the broken handle or skip right over how to get out the remnants.

The second video I linked mentioned that I might need to use a chisel or a drill to get out the remnants, but didn't provide any details on how to do so and more or less suggest it was going to be a big pain in the neck.

For reference, these are relevant details about the rake:

I have been considering drilling, but I don't want to mess up my bits nor the frame. Specific concerns about drilling I have are heat related as well as not being able to tell when I'm hitting wood versus plastic. Can anyone provide some clarifying guidance on if this is a good idea or issues that might come up?

Below are some pictures for reference, note that I've already removed the screw that typically holds it in place: 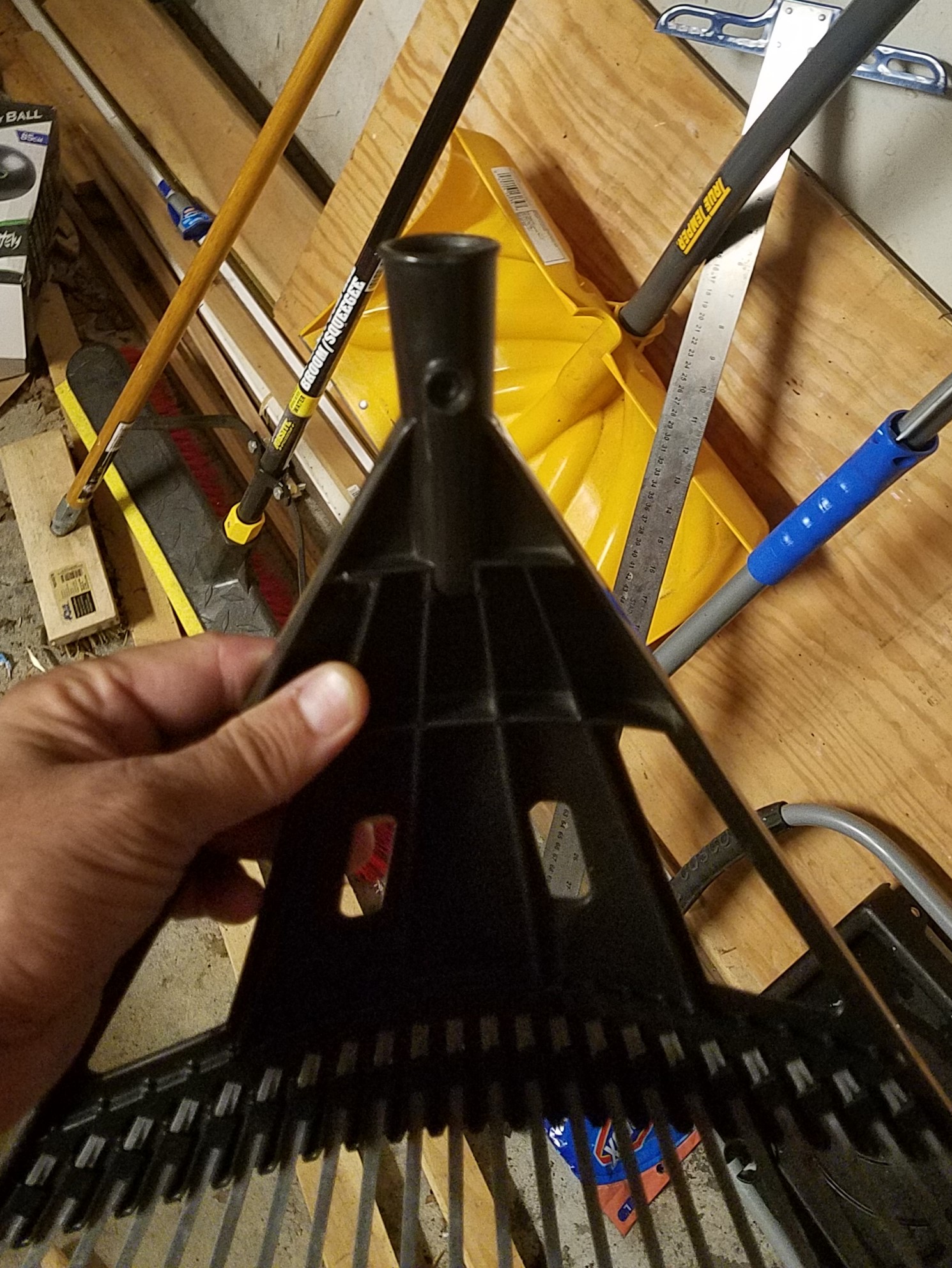 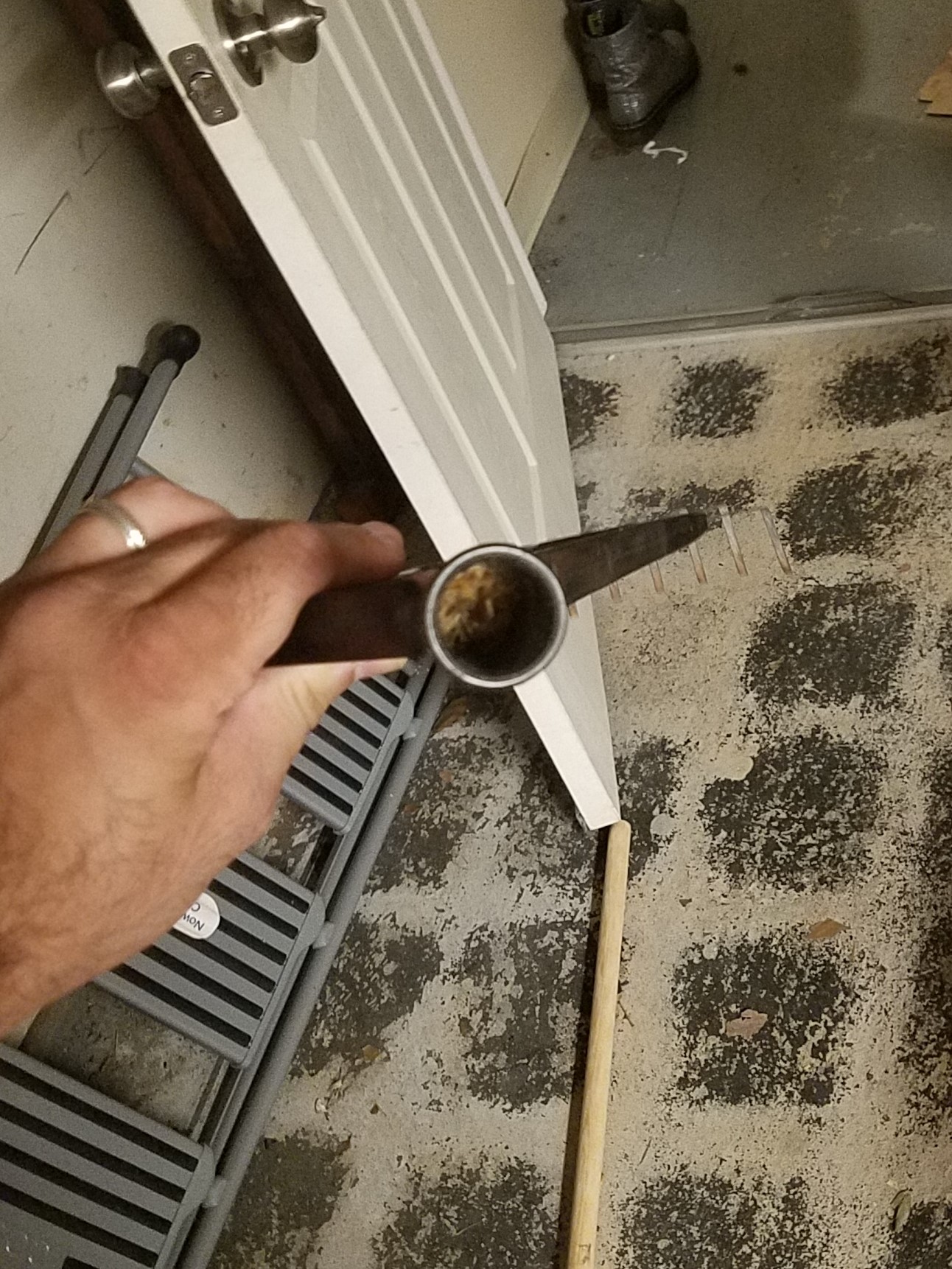 Use a flat blade screw driver to pry and work and brake up the wood.

Use a pair of needle nose pliers to pull the pieces out.

I finally had a chance to get back to this project and I'd generally state that the Youtube comment that suggested this would be a big pain in the neck was pretty accurate. This becomes doubly true when you've got a toddler to keep occupied.

Drilling a series of holes as suggested in Alaska Man's answer sort of worked, but not particularly well. Due to the tight space, the wood didn't really have anywhere to go, so I couldn't really drill more than 1 hole at a time and then I'd have to sort of ram the drill against the edge of the wood. This was doubly difficult because the depth of the wood in the frame was right up against the limit of the length of my drill bit.

My overall solution was not pretty, but it did work (rake frame was fully re-usable with the new handle):

I found after about 15 minutes of this process, it finally popped out in one piece with what was left.

I'm not sure, but I suspect the wood itself expanded a fair bit due to persistent exposure to the elements. This is further evidenced because the wood that I was drilling out wasn't hard, rather, soft and pulpy so it was pretty common to have the drill bit get gummed up.

I think that factor combined with the fact that there wasn't a lot of space for the wood to go is what creates the overall difficulty. That and toddlers.

Not the answer you're looking for? Browse other questions tagged repair tools or ask your own question.

5
What's the best approach to repair a wedge/corner crack in my foundation?
5
How do I fix a leak in this roof?
1
How do I secure a steel rod inside a blind hole of a silumin part?
5
How can I disassemble this old bathroom faucet to fix a leak, without damaging the decorative chrome piece?
0
How can I repair a cracked water tank?
0
Should (or even Can) I use epoxy to repair a previously PVA-glued load-bearing wood joint?
0
What is the name of this recliner couch screw holder?
3
What is this thing that holds widespread bathroom faucet handle to sink? How do I tighten it?
8
How do I identify and replace unusual screws?