Is this how I add GFCI and Regular Outlet to existing Multi Wire Branch Circuit, 20amp? 12/3 to 12/2 wiring with GFCI

I have a multi wire branch circuit using two 20amp breakers and a single run of 12/3 wire to a single split outlet in our laundry room. The top outlet (black) powers the gas dryer, the bottom outlet (red) powers the washer. We are adding a wet bar to the opposite side of the laundry room wall. I would like to run power from that laundry outlet to a new GFCI breaker outlet (because it will be within 3 feet of a sink), and then on to another outlet that will power beverage fridges. Can I pigtail connections to one of the outlets in the laundry room receptacle in order to provide this new power? Will the GFCI work correctly for itself and the new outlet downstream of it? Or will the shared neutral and ground screw up my plan? 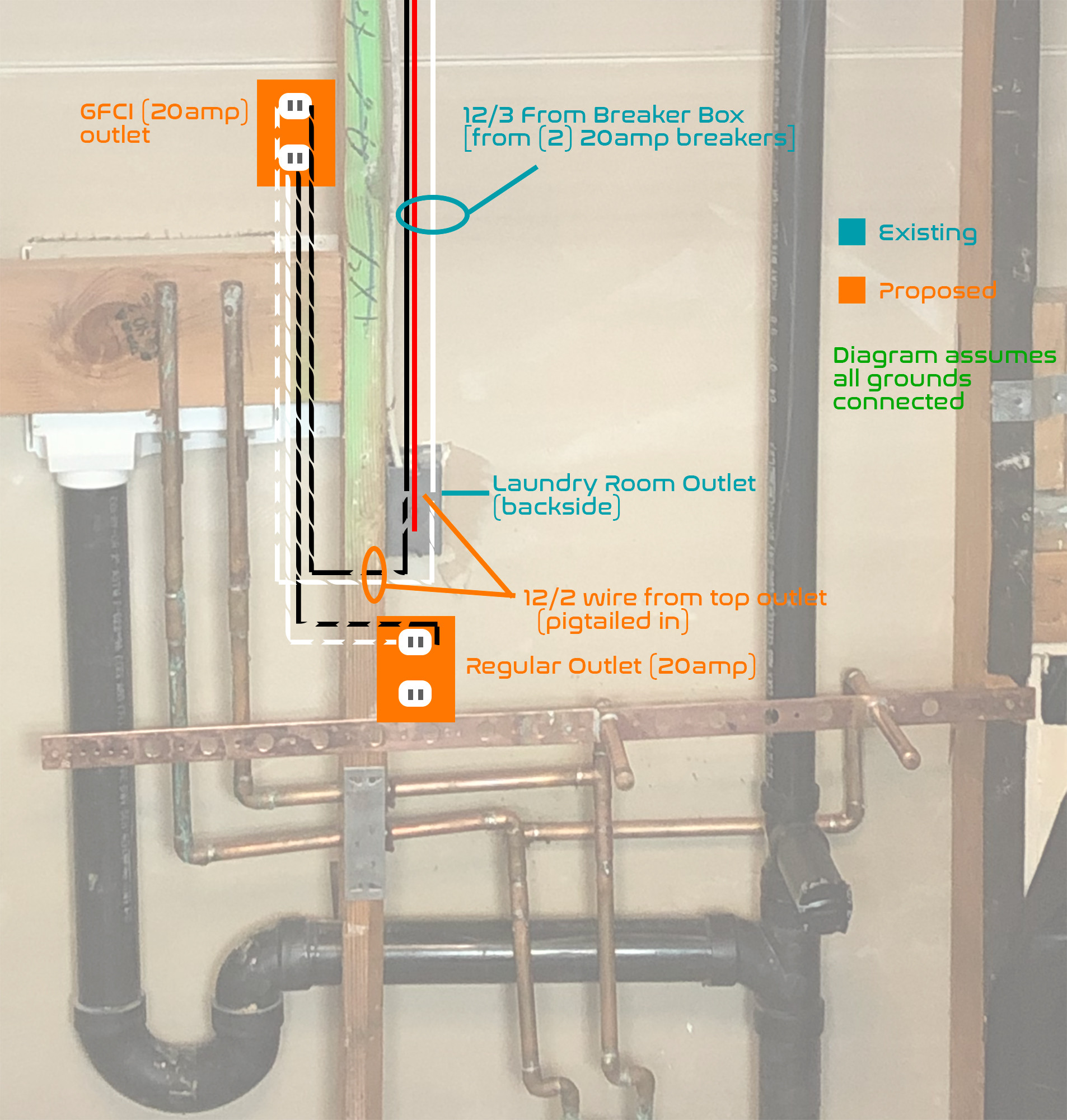 The fact that it is a multiwire branch circuit may have been allowed in the past I don’t remember but think it may have been ok. Today the laundry branch circuit is a required circuit and it is a dedicated circuit and can have no other receptacles so it would not be code compliant by today’s code or many code revisions back to add the GFCI receptacle even if properly wired.

First, the two breakers need a handle-tie. Or replace them with a 2-pole breaker.

When you splice or extend neutral on a MWBC, you must pigtail the neutral. You cannot use a device such as a recep to splice.

Other than that, I do not see a problem, except... ok. Bear with me. Modern Code requires the laundry room have a dedicated circuit all its own. It doesn’t say two, just one. If you are grandfathered, you don’t need to update to new Code, but you’re still not allowed to make things worse.

But my interpretation of that is that you have a dedicated circuit, the red. Extending the black to a mini bar is fine.

Now Ed Beal has concerns that a lot of inspectors will not like a multi-wire branch circuit serving half a dedicated application. So it'd be worth talking to your AHJ about that.

But here's an idea: what is a general safety problem is a lack of GFCI in the laundry room. So I would kill two birds with one stone and replace the laundry recep with a GFCI recep on the red circuit only. Both problems solved!

Not the answer you're looking for? Browse other questions tagged electrical wiring gfci 120-240v or ask your own question.