Dark Spots on Wood in Attic 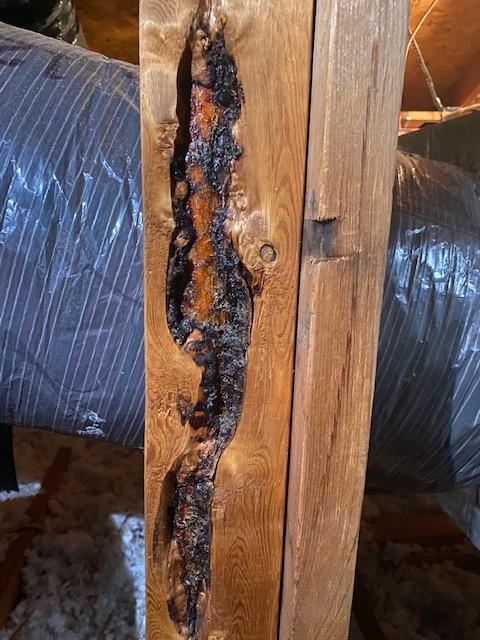 We were exploring the attic and found several posts with indented parts covered with some type of black substance. Anyone know what this could be. Thanks!

Pitch. Dried tree sap. That appears to be a rather large "pitch pocket", and other than the size, is perfectly normal.

The other possibility (hard to be sure from this picture) is that it's more of a "bark inclusion" where a dent/scar that had scabbed over on the face of the tree was not removed in planing.

A higher grade of carpenter would probably have tossed that board in the scrap bin, but presumably it met grade for the class of wood required and your house builder was more into budget than "nice." #2 studs can be pretty awful looking and still work.

Not the answer you're looking for? Browse other questions tagged wood attic or ask your own question.

3
Why is there tar leaking into my attic?
0
How can I dry out our attic and prevent mold?
0
Building an Attic Loft with a Low Pitch Roof (Approximately 5:12)
0
Black paper layer in attic…what is it's function and how do I patch it?
8
What is this amber substance on the wood in my attic?
0
Installing an electrical outlet in my attic?
1
Some powdery substance on roof rafters
1
Cutting ceiling joist for attic ladder install
3
Is it safe to be in insulated attic