I have a well pump. I want to build out a battery backup (and, eventually, charge the batteries with solar and, more eventually, move to solar full time).

It's 1/2 horsepower on a 240v circuit. It's a Webtrol WS1005L with a Franklin Electric motor. Per the manufacturer's documentation, it draws a max of 6 amps on the two wires with a maximum load of 960 watts and only needs a 15 amp breaker.

The manufacturer also says it can be run with a 2000 watt generator. 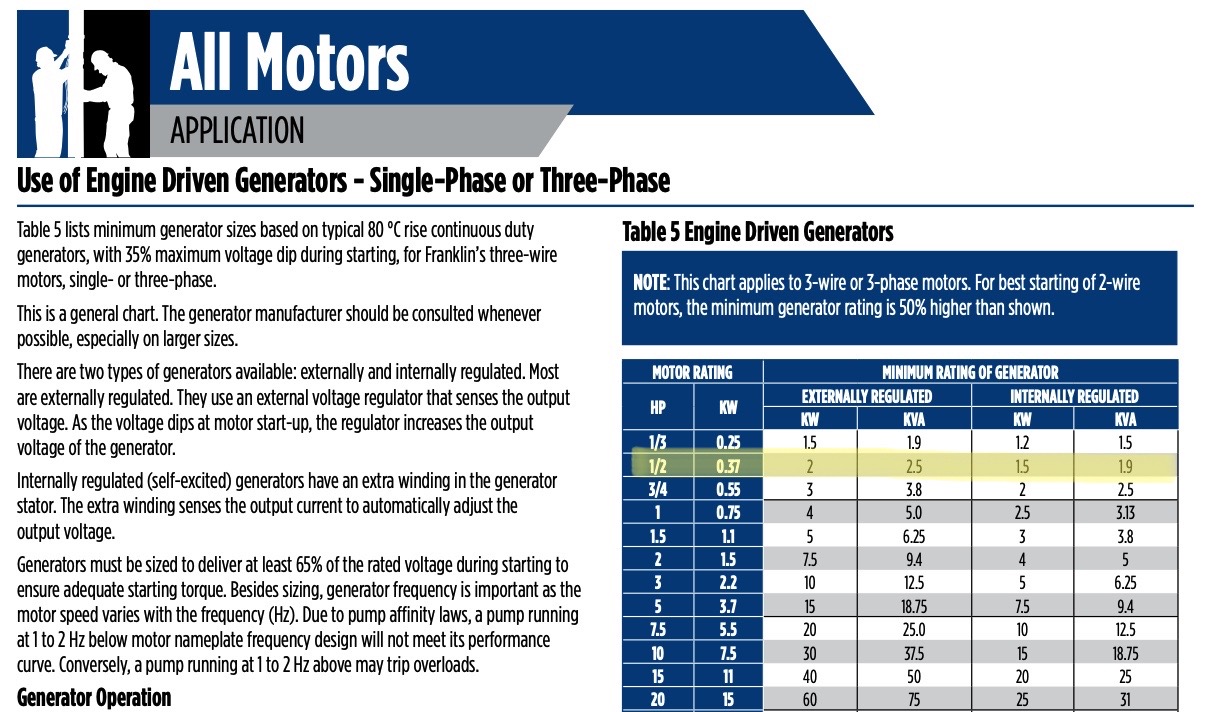 It has a beefy wire with a four-prong plug. 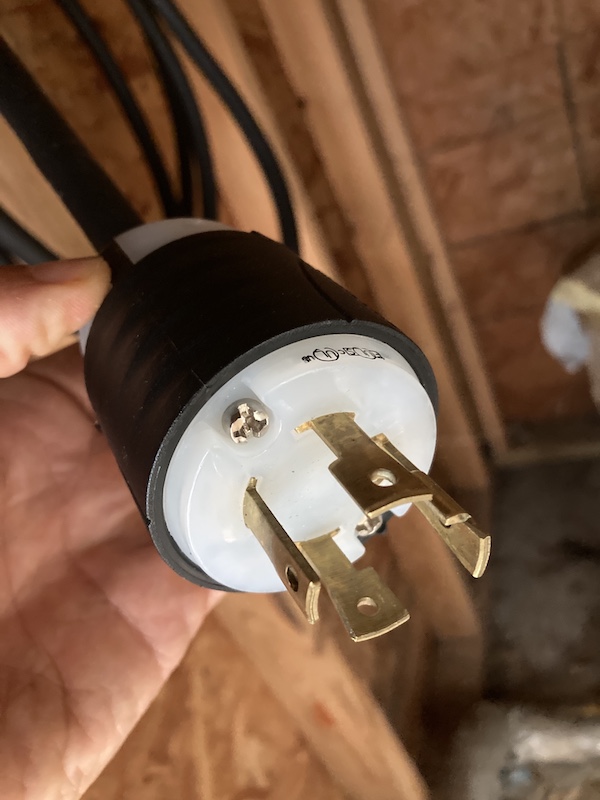 I'm trying to figure out what combination of inverter and batteries I need to power it.

For the inverter... I can't find an inverter that has an outlet like that. Is there one? Do those funky looking universal outlets work for that? Can I use an adapter to get to a more "normal" plug?

For the batteries... I assume I need some number of 100Ah sealed AGM batteries, and if my calculations are correct, one battery will get me about... 8 seconds of run time. How many should I have? Should I wire them together as 24V or leave them as 12V?

Any help would be appreciated!

Motor startup surge is going to be the biggest issue. You will probably need a 2000W inverter for this.

The motor will surely be 240V. Pump motors are run at the highest practicable voltage to reduce voltage drop. A motor is typically at the bottom of a potentially deep well, and so the run from house to wellhead, then down the well itself can be 600 feet in some cases. Running that on 120V would be totally unworkable.

As far as draw, 6A x 240V is 1440 VA. VA is the "whole waveform", "watts" is the part of the waveform the pump actually uses. Fortunately the inverter only has to make the part. So you can figure 960W draw from batteries. That will be

Not worth going higher because DC power starts to get dangerous above 48V, and Code requires you handle it much more carefully.

Which voltage is really decided by the cost and availability of the appliances being attached to the battery bank. Also keep in mind that voltage drop in wiring is much worse with lower voltages. Beefy aluminum "ought" wire is your friend!

Your 100AH battery can supply 100A for 1 hour -- but only a few times. A deep discharge like this damages and reduces the life of a lead-acid battery. If you need to regularly deep discharge a battery, use a nickel or lithium type. A better rule of thumb for a quality deep cycle lead-acid is to figure on using 30% of its capacity on a daily basis - so count on 30AH @ 12V for a single deep cycle. That is also 360 watt-hours.

As said, the pump draws 16 watt-hours per minute of run. A 2-battery system gives you 720 watt-hours (reasonably, daily)... so that'll run the pump for 45 minutes.

To recharge that, you need to put - throw a fudge-factor in there for charge efficiency - 1000 watt-hours from solar panel. Assuming 5 hours of respectable sun, that's 200 watts of solar panel.

Mind you, a leak would really screw you up. Because it would make the pump start periodically as water pressure leaks down. I would not simply have the pump energized 24x7. I would have a pushbutton at each water spigot that enables the pump for 15 minutes.

Don't run the inverter unless the pump's pressure switch kicks on.

Having an inverter "spun up" 24x7 waiting for an intermittent load like a pump motor or a fridge, is wasteful of electricity, because the inverter has a "standby load". The standby load isn't terrible on paper, but the load is active 24x7, so it really adds up. It's similar to the "vampire loads" from cable TV boxes and wall warts. As such, you should rig up the pump system so the pump's actuation switch actually switches on the inverter. The inverter should then shut off when pump current draw has gone to zero for a few minutes.

If you have the terrain to pull it off, focus on your ultimate goal: pressure and flow of water when you turn a tap. You can do that with a big tank, up high! This is a passive system that will work as long as the water lasts. It is much better to store water in a tank than electricity in batteries.

The tank only needs to be refilled from time to time, and your solar system can do that with "dump" power -- leftover excess power it would throw away because all loads are satisfied and batteries are full. In short when the system sees 100% battery and tank not full, run the pump for 5 minutes. If this isn't keeping up with water demand, then add panels to the system.

If you have not yet bought the pump, you may want to reconsider. If you buy a 3 phase pump, you can use a VFD to power it. Use a VFD that will accept a DC input directly, then you don't need the inverter (it IS an inverter). That will avoid the starting current surge of the motor, because VFD controls that. The down sides: Your DC voltage for a 230V pump will need to be around 330VDC, so that's 28 12 volt batteries in series (I'd go 30 to give you some head room as the batteries get old). It's also going to be expensive.

Alternative #2; get a solar powered well pump, basically a Permanent Magnet DC pump motor, no inverter needed at all. Also expensive, but MUCH simpler.

There are a lot of questions in your question, I'll answer the one relating to the plug. That looks like a L14-30 type plug (L14-30P is the plug, L14-30R is the receptacle). They are a locking type plug (locked by twisting).

These are pretty common on generators. If you can't find an inverter with this type of receptacle, you can easily source either a premade adapter or make your own - there are cord ends available at most home improvement stores or online.

But as Ed Beal pointed out in his comment, this does not seem to be the correct plug for the amperage of your pump anyway. You should switch it out for one that matches the current draw of your pump and the breaker that protects this circuit. The details for the rules on this can be found in the answers to this question.

Not the answer you're looking for? Browse other questions tagged electrical solar battery inverter or ask your own question.